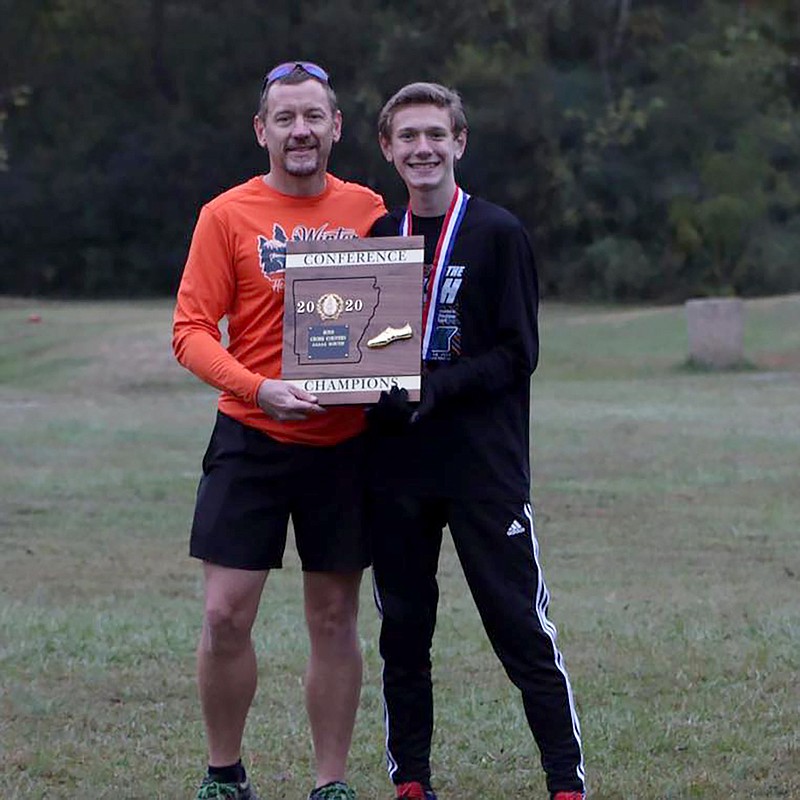 He has volunteered time helping out with races across the area, and he also helps out the cross country and track and field programs at Lake Hamilton -- either with setting up races or giving his own version of play-by-play of the top runners at the state cross country meet at Oaklawn.

While he may feel he is just doing the right thing, others see it as going above and beyond, and because of his volunteer work, the Road Runners Club of America recently named him the 2021 National Outstanding Volunteer of the Year.

"It's tough for me, because I'm not a person that really likes the limelight or recognition," he said. "I run and do things for people for the cause, not for the acknowledgement of doing it. I was extremely shocked when I found out I won this award. I didn't even know I was nominated; I really didn't know the award even existed. So when I won it, you know, I started thinking, I must have done something right following the people that have shown me the way."

Spa Pacers Running Club president Jerry White said that while many members of the running club are willing to give their time, Armitage takes it to another level.

"Spa Pacers members all tend to be wonderfully inclusive, very encouraging, and always ready to help out," he said in a statement. "However, Jason selflessly takes volunteering to another level. Whether it's serving on the Spa Running Festival Committee, tirelessly volunteering with high school cross country events, venturing out into the wooded trails at night to help pace a friend, organizing fun fitness challenges on the club's Facebook page, or providing excellent tips to everyone from beginning road runners to newbies taking on their first ultramarathon -- Jason can always be found contributing to helping others in the community."

A former drag racer, Armitage felt that he had achieved all he wanted on that stage, and his wife got him a gym membership.

"I kind of got involved in running in an unusual way," he explained. "I was a drag racer for years with cars, and I got to the point where I had done all I wanted to achieve at that point. And my wife called me one day and told me she had gotten me a gym membership in town. And I was not an exercise person really, even though I did like some athletics, you know, younger in school, but never was what I consider an athlete. And soon as I got into the gym, I met people that inspired me, and one thing led to another and the race distances just kept kind of piling up for me."

Armitage started running, and he would often see a group of people at the Transportation Depot running that invited him to run with them.

"Didn't feel like I was, you know, to their quality," he said. "They were in a running club, and I was just a guy showing up. And they were always waving me over and tried to invite me, but I just didn't know how to approach it. And finally, one day I started running with them, and found out they're some of the best people you can meet here in Hot Springs."

After joining with the Spa Pacers Running Club, Armitage began to fill roles where he felt he could help out.

"You tend when you're around good people to mimic the things they do, and there were needs that I could fill with some of the abilities I learned over time," he said. "As I got to be a better runner, I felt like I could help some of the new people that were in the position I was when I started. So as I saw a need arise, kind of at small levels, maybe some local races, very easy entry level stuff, and then it just kind of kept growing from there what I could kind of help with."

Armitage said that while he may have won this award, he knows many people in the Hot Springs running community that are just as deserving of this award.

"I don't take credit for anything I've done because these are all things that my friends, the culture that I live in with this running community, everybody gives their time," he said. "So I go to all these different events, and there's always volunteers. None of these races can happen without people lending a hand. The Spa Running Festival here in town would not occur without probably in the neighborhood of 50 to 100 different people giving their time. So I kind of accept this award on behalf of everybody that has helped me, and you know, if I could break it into a couple hundred pieces and everybody get a piece of it -- but sorry, that's not going to happen. It's going on my shelf at home."