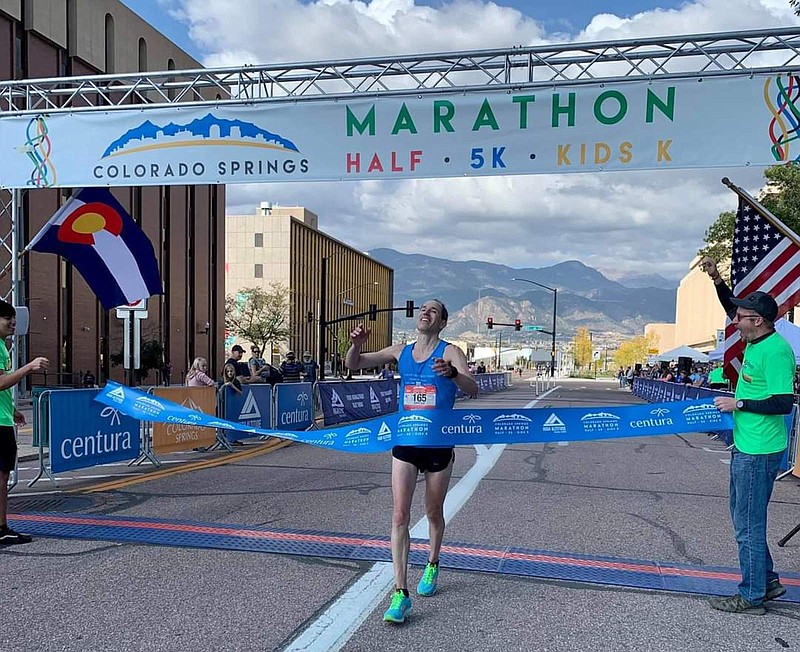 Winning one marathon over the age of 50 is an impressive feat, but Spa Pacers President and Hot Springs resident Jerry White went beyond that and won back-to-back marathons in Colorado Springs, Colorado, and Maui, Hawaii.

"I just feel very blessed to be over 50 years old and had not won a marathon in at least 10 years and didn't expect to win one much less two just so close together," White said. "Honestly I don't feel worthy of having won most of the time."

White said that while he feels good, has had good training and is injury-free, a lot of it is about being in the right race at the right time.

"There's lots, lots faster people out there," he said. "It's a lot about just showing up and participating and being in the right place at the right time. I'm still surprised, honestly. I wake up some days just thinking, 'Did that really happen?'"

"I have a first cousin there that I had never visited before," White said. "My wife and I had planned on staying with them and visiting with them. So that was more of the reason for going than thinking I might win."

White had been experiencing warm weather in Hot Springs before heading to Colorado, and he was gifted with a nice, cool day on race day.

Heading into the race, White said he felt like he would have a chance to finish in the top five after looking at times from previous years.

"I didn't have really any thought in my head that I might be able to win," he said. "I was just hoping to run a good time and also enjoy visiting with family."

The marathon started at the same time as the half marathon, so White did not know who around him was competing against him in the 26.2 miles at the beginning of the race.

"You don't know out of these folks that start out pretty fast who's going to keep going and who's going to turn around and go back," White said. "I had several people ahead of me up through about six miles."

However, when White got to around the six-and-half mile mark, most of the people turned around.

"When I got to that point there was a policeman on a motorcycle that started up," White said. "I recognized that must be the person that's supposed to lead the first runner in the full marathon. At that point I interpreted I was first. Honestly, I felt good. It was a little bit of a shock, but I felt like I was running pretty comfortably."

White has not won a ton of races, so it was an exciting moment for him to realize he was in contention for a first place finish.

"At that point," White said, "I just wanted to keep relaxed and not get too excited and go too fast and then have trouble making it to the finish line."

When White got to the finish line, his family was waiting for him to celebrate his win.

"When I realized I was going to win, it's just really jubilation," he said. "I mean just excited. It was especially neat for me because I got to spend some time during the race getting encouragement from my cousins and my wife. They were able to make it to three or four different stops and be my cheerleaders."

He also felt a feeling of relief after he started to experience some leg cramps around the 18th mile of the race.

"Those last eight miles I was just kind of praying that I didn't get overheated or get too dehydrated and have to stop or something or have a bunch of people come and pass me at the last minute," he said. "It was just really, really fun to cross that finish line and get to break the tape."

While it is common to get tired after a marathon, White did feel a little more exhaustion near the end of the race than normal, due to less oxygen at the altitude. His finishing time was just slightly slower than it would be at sea level.

"I was blessed with a nice, cool day and I think that offset the elevation," he said. "I think that also training here where our humidity is significantly higher than there, it really kind of mimics altitude a little bit. So I don't think it affected me a ton."

After the race in Colorado Springs, White chose to run in Hawaii because he wanted to travel there with his wife, and he already had the Maui Oceanfront Marathon as a race on his radar that he wanted to run.

White felt pretty prepared heading into the race. The Maui Oceanfront Marathon had an active race director that sent White plenty of notes, and the only thing he really worried about was the heat and humidity in Hawaii.

"Honestly it couldn't have worked out to a more beautiful day," White said. "One of the neat things about the race is they start at 5 a.m. So you get a couple of hours as darkness, and that helps with it staying a little cooler. About as cool as it's going to be in Maui."

As the name suggests, the race course travels along the oceanfront highway in a point-to-point race between two towns.

"It is a beautiful race course," White said. "So you just spend basically the entire run going along the coastline seeing the sun come up over the ocean. A beautiful, beautiful place to run."

"I think it was just a matter of people not picking those particular races for some reason," White said. "You know younger, faster and more talented. It just worked out great."

Looking into the past, White has always been a runner. He even competed in races at recess in elementary school.

Already holding an interest in running, White grew up with a neighbor who introduced him to road races.

"My parents were very supportive," he said. "They would take me on Saturday mornings to different 5Ks in different towns close by. I just enjoyed that. I did run on the cross country and track teams in high school. I didn't have huge individual success, but we were very successful as a team."

After all those years White spent running, he actually stopped running around the time he went to college. However, when he was about to turn 30, he started to gain a little weight and decided to start running on the weekends.

"I did that for just a little while, and I entered the first road race I had done in years and years," he said. "Almost instantaneously, I was just hooked again. Running on the weekends became running four or five days a week then six or seven days a week.

After getting back into running, White eventually found marathons.

"There's something about that 26-mile distance," he said. "It's special when you cross that finish line -- no matter whether it's your slowest race ever or fastest one and whether you finish first or last. There's just a sense of accomplishment of just enduring through obstacles."

White has moved around over the years, and one of the first things he does when he moves to a new place is he finds the local running club.

White and his wife moved to Hot Springs around five years ago, and he joined the Spa Pacers.

"Right off the bat I found that the Spa Pacers were some of the most welcoming, most hospitable folks," he said. "They just really are like a family. They welcomed me into a Saturday morning group run that we do from the Transportation Depot every morning."

After joining, White got to know some of the members of the board, and after a couple years as a board member, White became the president of the Spa Pacers.

"I really felt humbled and again, not really worthy of that," White said. "I've found that it's really not about skills that I have. It's really about all the people that are supporting the person that's in that president's role. I really have the easiest role of anybody in the club. I'm just so fortunate to have really capable and extremely diligent volunteers for anything that comes along."

Looking ahead to the future, White said his calendar is not too full of upcoming races. However, he did sign up for the Barcelona Marathon in May, so he will travel with his wife to Spain for a destination race.

White would also like to compete in another marathon over the next few months as he continues toward his goal of running a marathon in every state.

"I'm about halfway through," he said. "I'm looking for a state I haven't run a marathon in, and hopefully I'll get that on the calendar soon."