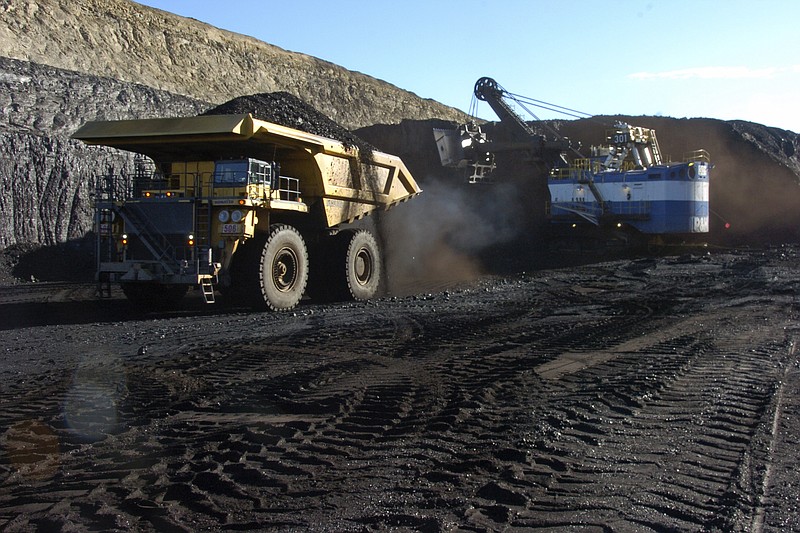 In this Nov. 15, 2016 photo, a haul truck with a 250-ton capacity carries coal after being loaded from a nearby mechanized shovel at the Spring Creek strip mine near Decker, Mont. The mine is in the Powder River Basin of Montana and Wyoming, the largest source of coal in the U.S. Environmentalists are pushing to end mining because emissions from burning coal help drive climate change. (AP Photo/Matthew Brown)

One of the largest mines in this arid region straddling the Wyoming border is Spring Creek -- a gaping hole among sagebrush hills where house-sized mechanical shovels dig up millions of tons of coal annually, much of it shipped overseas and burned in Asian power plants.

Spring Creek's hundreds of jobs help undergird the economy of the Crow Indian Reservation and nearby parts of Wyoming. In Big Horn County, encompassing most of the reservation, taxes and royalties from coal fund almost two-thirds of government services. It's one of the most coal-dependent communities in America.

Greenhouse gas emissions from burning that coal also stoke climate change, and President Joe Biden's administration wants to put a cost on the resulting damages to people and the environment. Highlighting the "social cost of carbon" could justify emission reduction rules for fossil fuels, transportation and other industries.

But a federal judge in Louisiana temporarily halted such efforts this month and blocked the administration from using an interim standard of $51 in damages per ton of carbon dioxide emitted.

The White House had been preparing to update its climate damage price tag in coming weeks. Many economists expected the figure to increase dramatically and even double. Republicans and business groups argued the emphasis on future climate damages would hobble the economy, particularly the energy industry.

For Spring Creek, applying the administration's carbon cost would yield estimated damages of more than $1 billion annually from a federal government coal sale that would keep it mining at least another few years.

It's an eye-popping number from just one of 15 mines dotting the Powder River Basin of Montana and Wyoming. But, after a federal judge in Montana ruled that the government overstated the mine's economic benefits, the Biden administration is weighing the climate costs and reconsidering the mine's permit.

Environmentalists want the department to stop an ongoing Spring Creek expansion and end mining. Their goal is to use the social cost of carbon to deny fossil fuel projects, not just to inform rules and policies as in the past.

BRACING FOR A DOWNTURN

Climate change already is being felt in this sparsely populated region -- where recurring droughts hit farms and ranches, lower river levels harm fishing and massive wildfires rip across the landscape.

"The impacts just from the greenhouse gas emissions from burning this coal are tremendous," said attorney Shiloh Hernandez, who represents environmentalists against mining. "These are real impacts that cause real harm to real people."

Pending the permit review, Spring Creek keeps digging -- 13 million tons last year as Powder River Basin coal prices reached record levels when the economy rebounded from its early-pandemic slump. The mine is owned by a Navajo corporation that became the third largest U.S. coal producer when it took over bankrupt Cloud Peak Energy three years ago.

Local officials aren't counting on coal's recent bump to last: Over the past decade, U.S. demand plummeted and dreams of shipping more coal overseas were blocked by West Coast states. A mine next to Spring Creek closed in early 2021.

After cutbacks hit key services such as maintenance of 1,000 miles (1,609 kilometers) of gravel roads, the county's shifting the tax burden onto local residents to keep its sheriff's office and other departments functioning.

"We've had to ... basically boil down government to the bare minimum," Real Bird said.

Spring Creek contributed $23 million in local and state taxes and other payments last year, Zah said. The company expects 2022 to be good for coal but is bracing for another downturn -- halting new equipment investment and planning to shift workers into mine reclamation jobs.

The Obama administration first adopted the social cost of carbon and used it more than 80 times in cost-benefit analyses for government rules, including tightened vehicle emissions standards and regulations aimed at shuttering coal plants.

In seeking to roll back those rules, the Trump administration cut the social cost of carbon to $7 or less per ton. The lower number included only domestic climate impacts and not global damages, making it harder to justify expensive rules for industry.

Biden restored Obama's $51-ton estimate on an interim basis and signaled an even higher number would be adopted. On Saturday, the administration appealed the Feb. 11 court ruling that blocked use of the social cost of carbon, saying it could affect more than 30 pending rules, delay permits and leasing for federal fossil fuel reserves and undermine international climate talks by silencing U.S. officials on the topic.

"It's a little shocking to see all of the impacted actions," said Romany Webb, a Columbia Law School researcher focused on climate change.

Republican attorneys general led by Louisiana's Jeff Landry warned of more burdensome rules across daily life if the administration prevails -- including for home appliances, vehicles and electricity. They called the use of the carbon cost possibly "the most significant regulatory encroachment upon individual liberty and state sovereignty in American history."

The $51-ton estimate came from climate models developed by three economists in the 1990s.

Two of them -- William Nordhaus at Yale University and Richard Tol at the University of Sussex in the U.K. -- say updated models show more damage than previously expected.

"Estimates are higher ... because we now better understand the impact of climate change on labor productivity -- the human body cannot work hard when it is hot and humid," Tol said.

Nordhaus in a recent study reported a "substantial increase" in the social cost of carbon -- up to twice previous estimates. He predicted trillions of dollars in damages, equating to 2% of global income based on warming of 3 degrees Celsius (5.4 degrees Fahrenheit).

However, some economists say the models fail to capture complexities of climate change that could result in less damage than feared.

Despite debate over the correct dollar value for climate damage, previous court rulings made clear that future impacts must be considered in some fashion, Rose and several legal experts said. 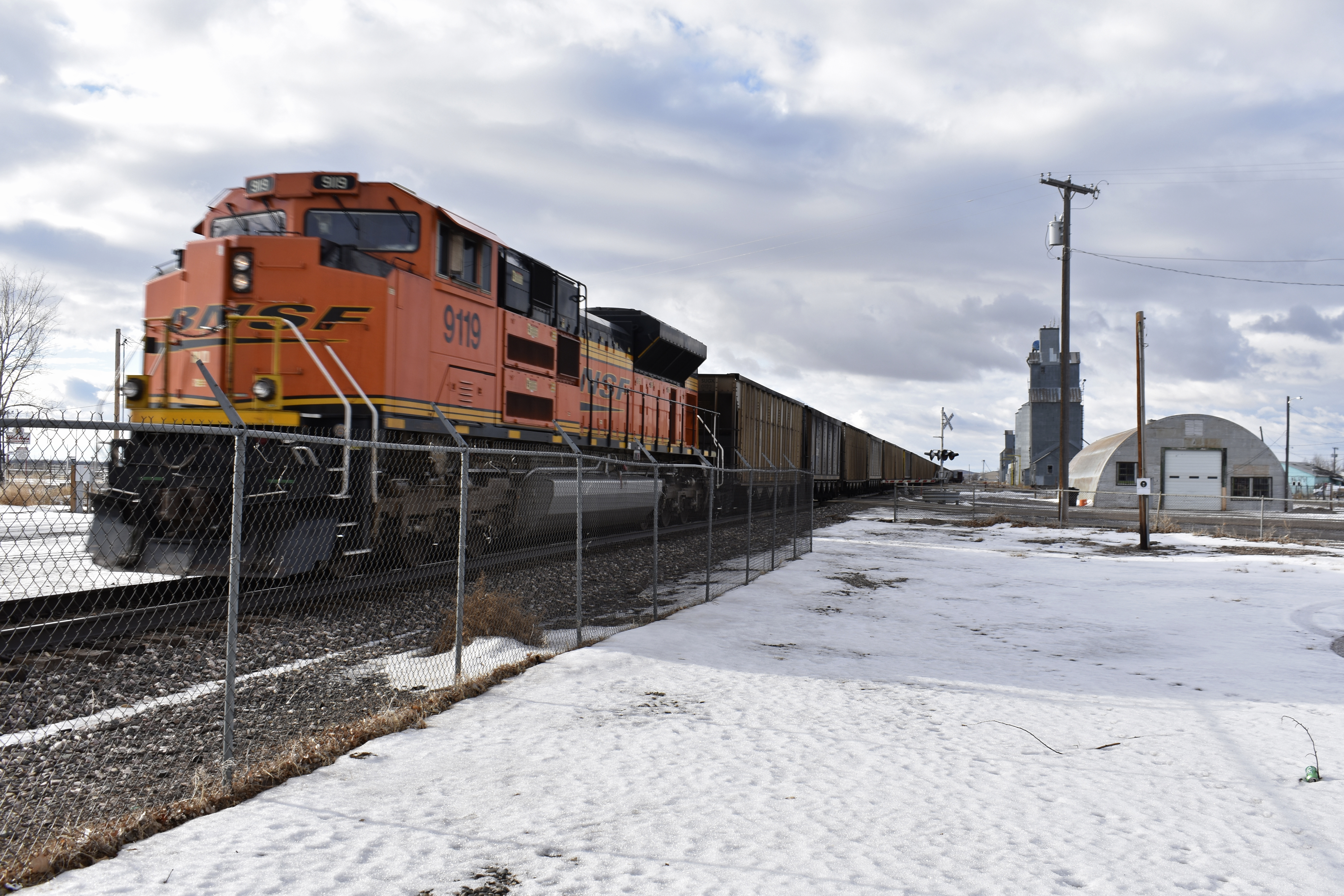 A train hauling thousands of tons of coal from mines in the Powder River Basin along the Montana-Wyoming border is seen passing through the Hardin depot, on January 14, 2022, in Hardin, Montana. The Biden administration says the costs of future damages from climate change emissions from burning coal and other fossil fuels need to be factored into energy policies, but energy-producing states have resisted. (AP Photo/Matthew Brown) 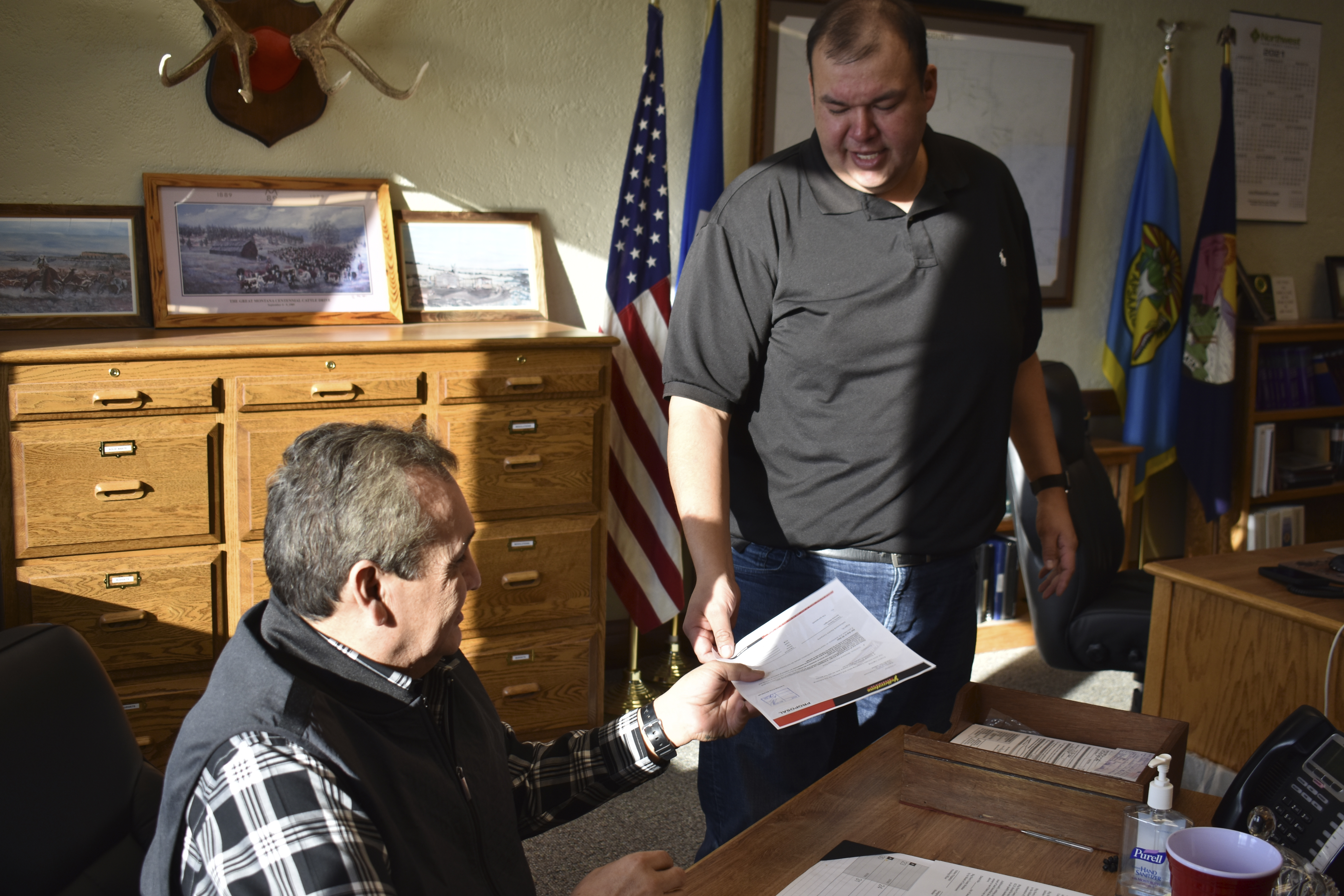 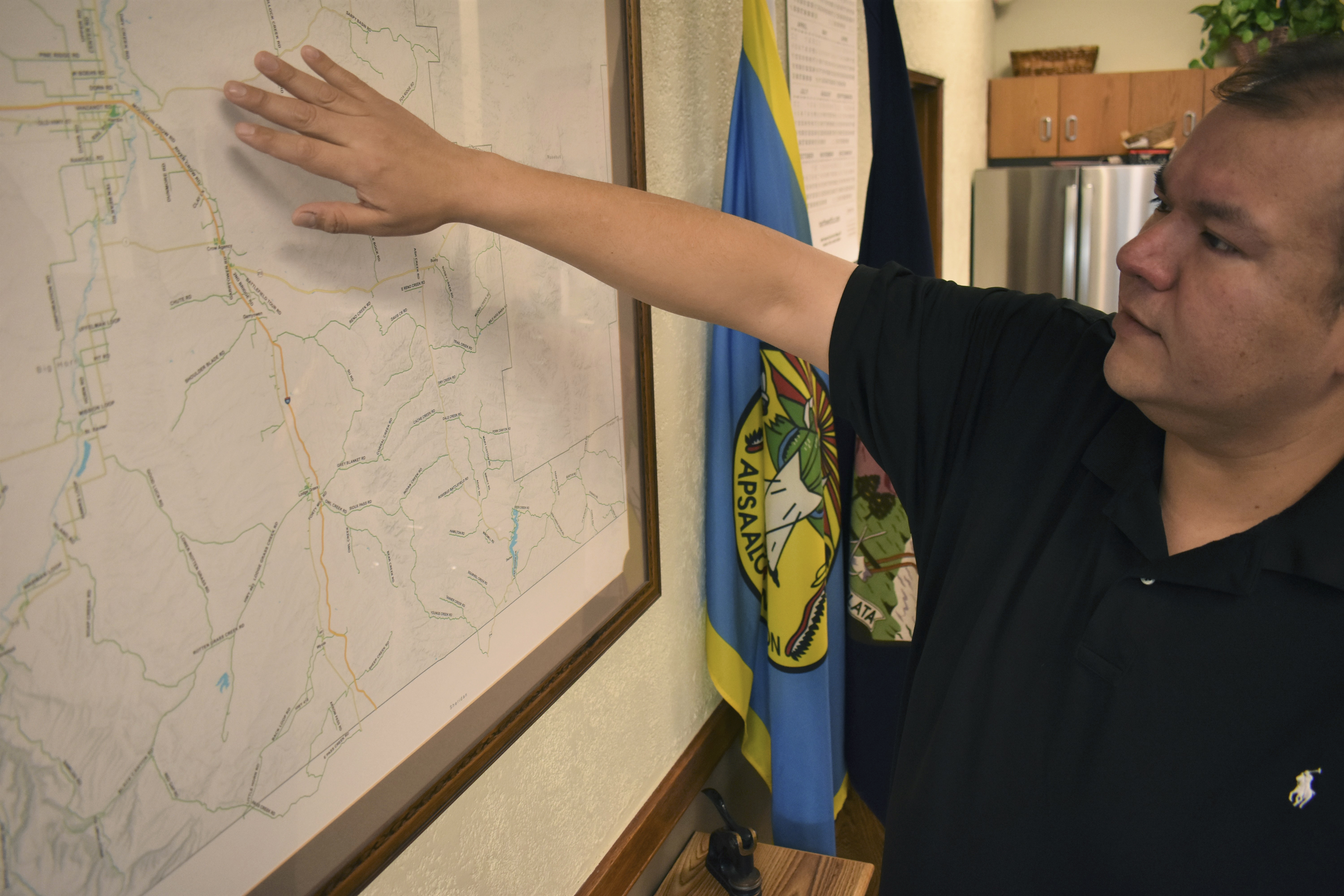 Big Horn County Commissioner George Real Bird III gestures to a map to indicate where massive coal seams underlie the surface in southeastern Montana, in this photo from January, 14, 2022, in Hardin, Montana. Money from coal has long supported the local economy but has been declining as utilities switch to cleaner burning fuels. (AP Photo/Matthew Brown) 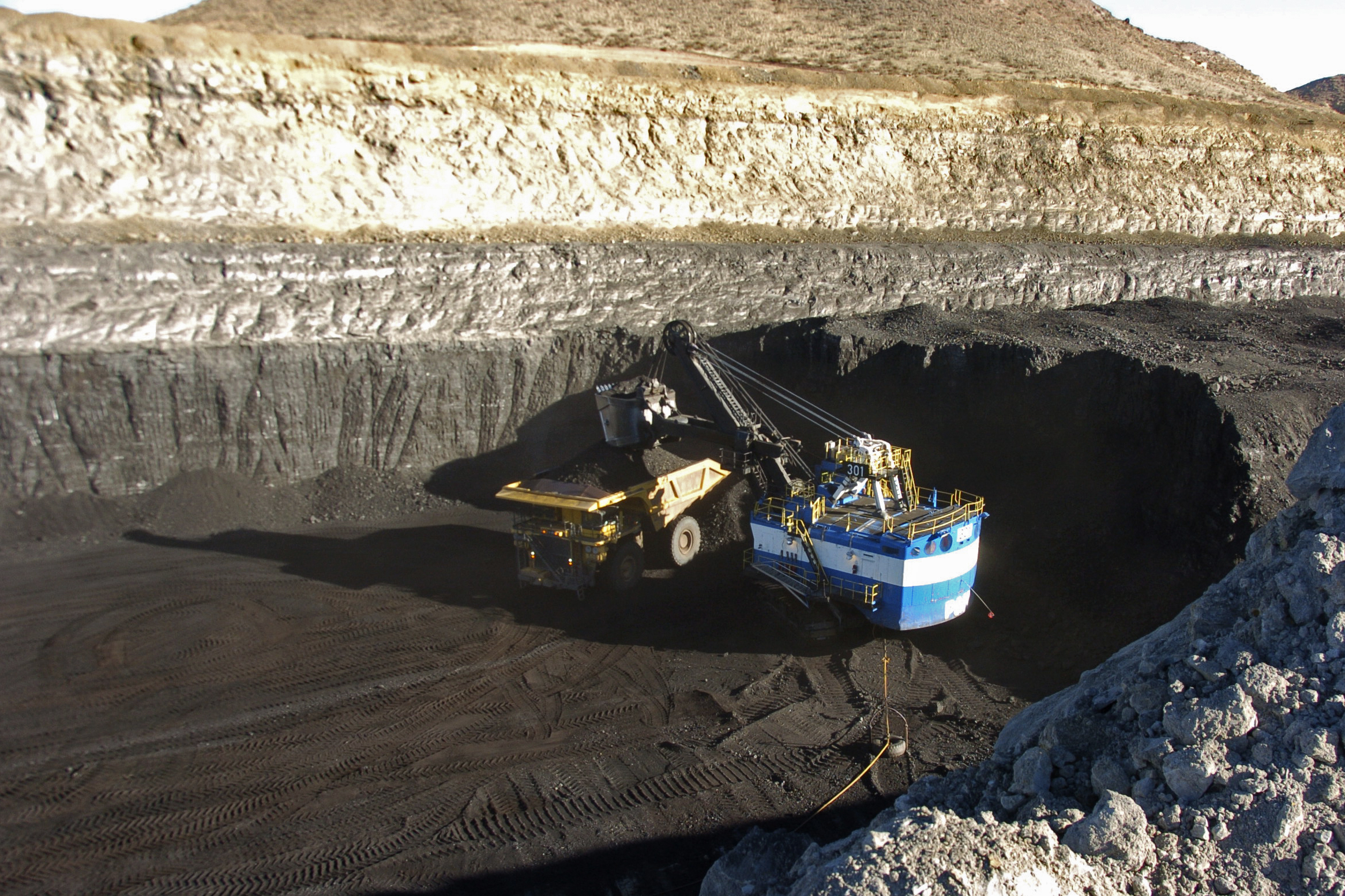 In this Nov. 15, 2016 photo, a mechanized shovel loads coal from an 80-feet thick seam into a truck at the Spring Creek mine near Decker, Mont. The Biden administration is preparing to update how it calculates damages from climate change to take into account better understanding of the economic consequences of a warming world. (AP Photo/Matthew Brown) 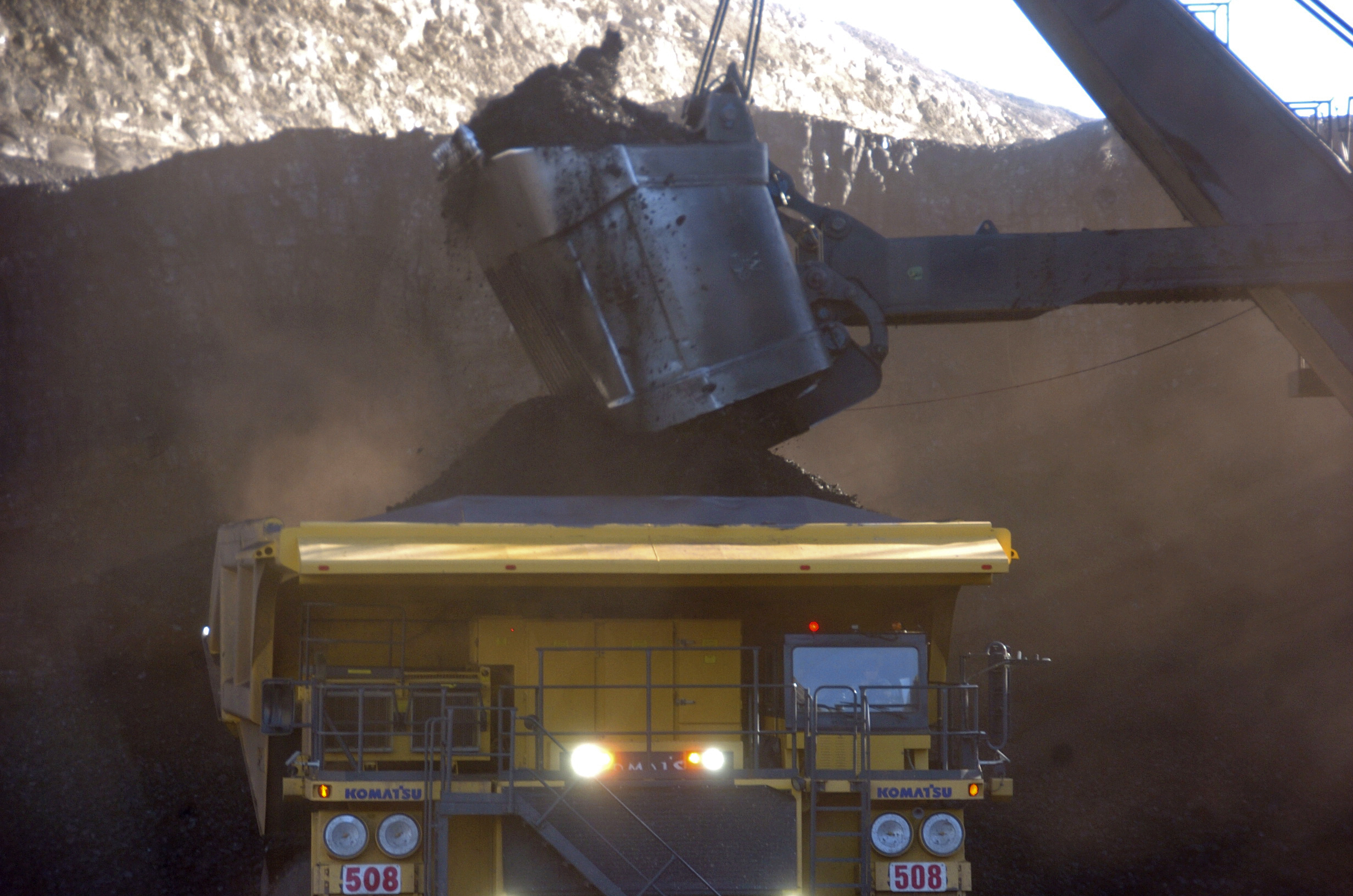 In this Nov. 15, 2016 photo, a mechanized shovel loads coal from an 80-feet thick seam into a truck at the Spring Creek mine near Decker, Mont. Coal prices in the region have been at record levels even as worries about climate change loom over the industry. (AP Photo/Matthew Brown) 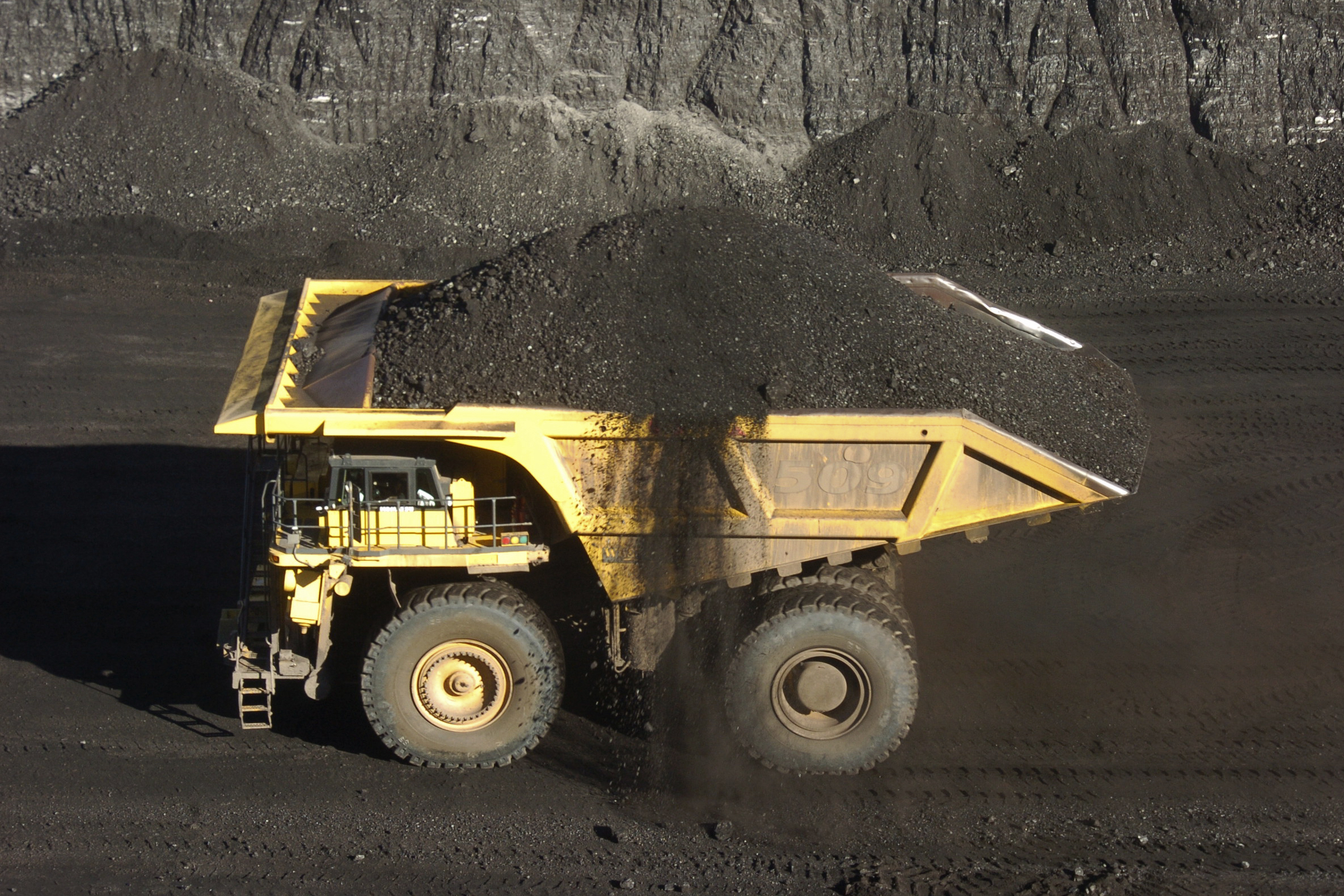 In this Nov. 15, 2016 photo, a haul truck with a 250-ton capacity carries coal after being loaded from a nearby mechanized shovel at the Spring Creek strip mine near Decker, Mont. The mine is the main source of revenue for Big Horn County, which includes much of the Crow Indian Reservation. (AP Photo/Matthew Brown) 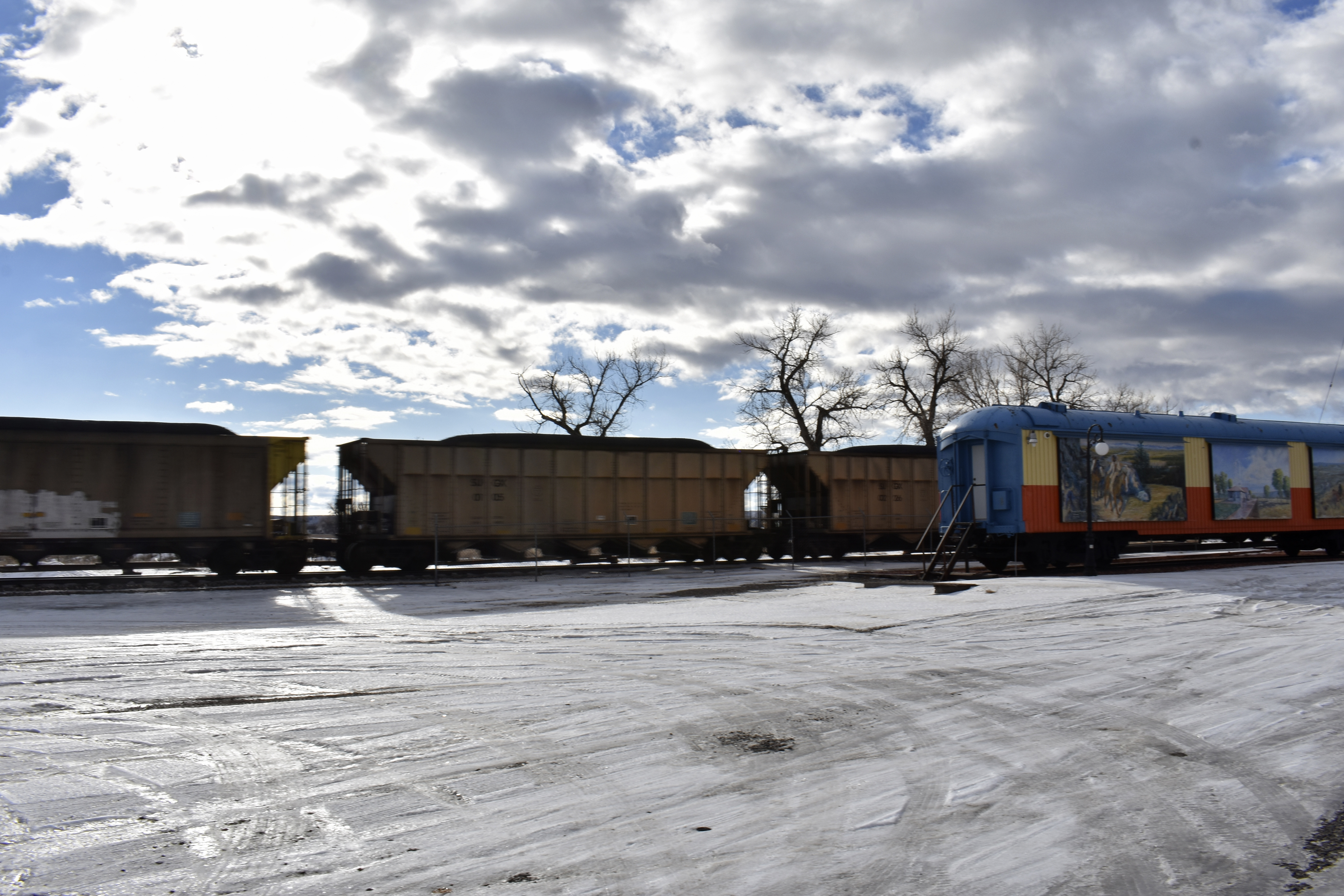 Train cars carrying coal from the Powder River Basin along the Montana-Wyoming border are seen passing through the Hardin depot, January 14, 2022, in Hardin, Montana. Environmentalists say the costs of future climate change damages should be factored into decisions on whether to sell coal from government reserves. (AP Photo/Matthew Brown)