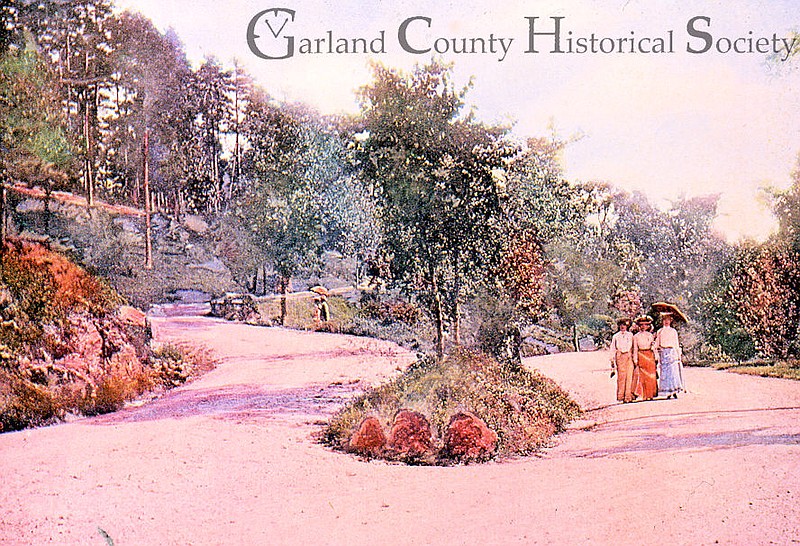 Strolling on Hot Springs Mountain was a favorite form of exercise. Photo courtesy of the Garland County Historical Society

Each January, many people think about how to get healthier in the new year. For many decades, they decided to visit Hot Springs to improve their physical and mental health. The “season” of visiting started in January every year and continued through fall.

“The Greatest Health and Pleasure Resort in the World” is how Charles Cutter dubbed Hot Springs in his 1891 Hot Springs Illustrated Journal.  The New Yorker came here in 1874 to find better health. He found that, thanks to the thermal waters, and also found his life’s mission — touting the health benefits of the hot springs. His longest lasting publication was Cutter’s Guide to the Hot Springs of Arkansas, an annual booklet that told the story of the thermal water for over 50 years. This marketing tool did more to promote the success of the thermal baths than any other format of the day.

How healthy was Hot Springs? Cutter said that in 1891 Hot Springs had the lowest death rate of 50 major American cities and a world-wide reputation for “curing diseases often considered incurable.” He praised the climate: “No sultry nights at Hot Springs. Blankets in demand before morning.” (This may seem surprising to residents today, but he cites 1891 Army and Navy Hospital records of a July mean temperature of 85 and an August one of 82.)

He called for all to come: “Old people and business men who are overworked should visit Hot Springs annually and take one or two courses of baths. By so doing they will surely prolong their lives and be more comfortable while they do live.” He did not overlook “lady visitors,” whom, he said, “ … are increasing every year and now average about one-third the number of our annual visitors. Those who feel the heavy hand of time being placed upon them and their looking-glass revealing wrinkles can, by bathing in and drinking of these waters, so improve their complexion as to appear years younger than their actual age.”

Cutter extolled the hotels, particularly the Eastman Hotel, the largest hotel in the South, which opened in 1890 with “superbly furnished guest rooms and the largest dining room and kitchen we known of in the United States. It employs its own band, which give two or three concerts daily.”  He also praised the Park Hotel, sited in a beautiful park of 8 acres with a separate dancing pavilion and bowling alley.

But his highest praise went to the bath houses and the effects of the thermal water. He described the bath houses as having “no superior in the world, costing small fortunes to build and furnish. They have all the latest appliances and improvements.” He claimed that within “the last 25 years over 100,000 people have been cured of diseases that the most skillful physicians of our land considered past recovery.” He especially advised those with rheumatism to come here: “We have known crutches to be abandoned after the first bath.”

Cutter gave little scientific proof of his claims, but 6,000 visitors came to our city of 12,000 in 1891, and the numbers of permanent residents and visitors continued to grow.  That growth was fueled by the belief expressed by Cutter and shared by many: “No where else are so many cures effected without the use of medicine, and at no other health resort do so many gather together for recreation, rest, and pleasure.”