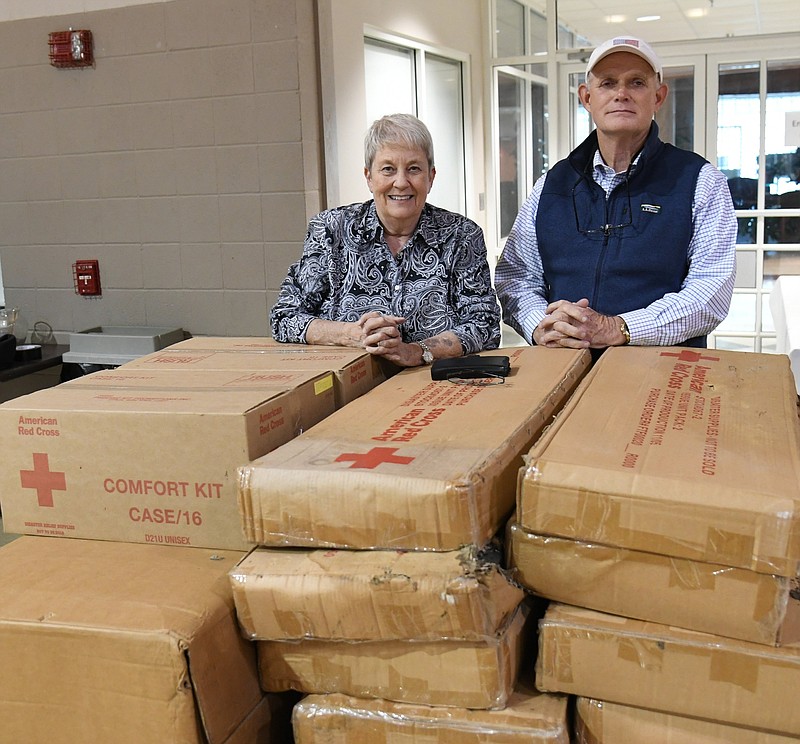 Sally Carder, left, volunteer outreach coordinator for St. Luke's, and Larry Barnes, director of operations at First United Methodist Church, stand next to the 40 cots and 60 blankets that the American Red Cross donated to help with the homeless at FUMC. - Photo by Tanner Newton of The Sentinel-Record

With significantly colder weather forecasted for this weekend, St. Luke's Episcopal Church and First United Methodist Church are teaming up again to help keep the town's homeless safe and warm with a temporary warming shelter.

The doors will open at FUMC, 1100 Central Ave., at 5 p.m. today for the shelter. Sally Carder, volunteer outreach coordinator for St. Luke's, said that she expects around 30 people to use the shelter this weekend.

"We're going to open on Saturday and Sunday nights. We want to provide our homeless neighbors with a hot meal, a warm cot and blanket and some kind of shelter over their head during the coldest of winters," Carder said.

"What we are doing is trying to prevent death," she said.

"When the temperature gets to 20 degrees, 22, 23, if the windchill factors are going to make it to where it's necessary for us to open a shelter, we're going to open," she said.

This is not the first time that the churches have worked together; during February's subfreezing cold and snowstorms, Carder said that they housed dozens of people.

"Last year, when we had the snow, I believe we had about 75 cots out, and they were full, and that includes eight dogs and two cats," Carder said. "At this time, because it's not snowing, I expect somewhere around 30 people."

The American Red Cross has joined the churches in the shelter.

"The other important partner that we have is the Red Cross, and they have delivered us 40 cots and 60 blankets," Carder said.

She said that the churches would appreciate donations of "sodas, water, snacks, even some breakfast foods" and "we are asking for people to let us use their dog crates and to provide some dog food and some cat food, as well."

The shelter will also provide meals; Carder said that the first night they will have spaghetti provided by Lakeview Assembly, but she wasn't sure what they were having the second night.

Since COVID-19 is surging in the community, Carder said that they will be taking steps to make the warming shelter safer for its occupants.

"Of course, the thing that scares us to death is the possibility of a COVID spread," she said, noting that "most of our homeless neighbors have had their shots. They don't all have their boosters, so we're be looking at a way to provide those as soon as we can."

"We would like to ask everybody to pray for us during this time. We're taking temperatures, we're monitoring anybody that's in here to see if we have any kind of symptoms and at that point, we'll take care of that," she said.

"It's a scary time, but it's also a time that we need to prevent more deaths. Last year, we had too many people that died from the cold. We need to do all that we can to see that people are safe, and that's what we are trying to do," she said.

Carder said that other churches and organizations that have helped with their efforts to keep the homeless safe during cold weather include Lakeview Assembly, Cooperative Christian Ministries and Clinic, Encounter Church, New Life Church, Crossgate, the city of Hot Springs and City Manager Bill Burrough.

While there are a number of churches that help, Carder said "we are asking for other churches to step up and come alongside us and help during these times."

"I'm sure that this is not going to be the only time that we're going to get down in the 20s, low 20s and teens this year. This is just our first one," Carder said, adding that any churches willing to help can contact her by private message using Facebook Messenger or by calling her at 501-282-2812.