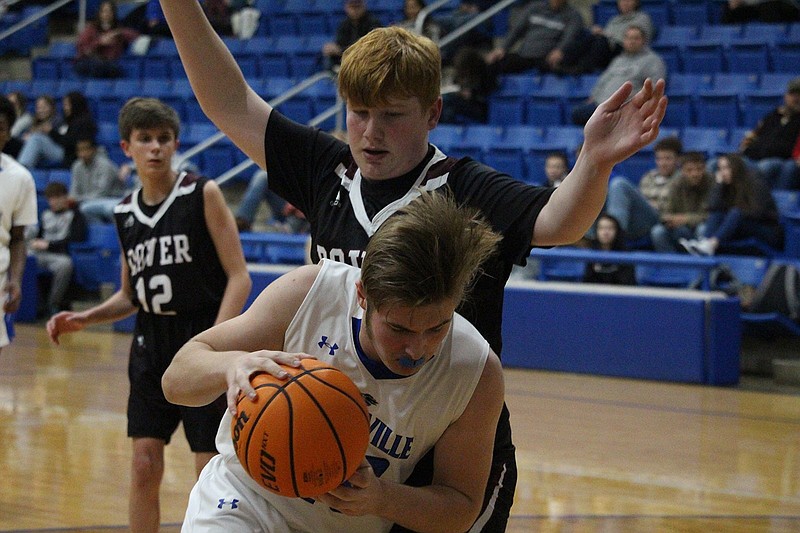 Jessieville's Ethan Lewis (40) posts up in the paint against Dover at Jessieville Sports Arena Friday night. - Photo by Krishnan Collins of The Sentinel Record

JESSIEVILLE -- Jessieville started its game against Dover on a 10-0 run and never came close to giving up the lead in a 33-20 win for the junior Lions at Jessieville Sports Arena Friday night.

Neither team scored until over two minutes elapsed off the first quarter clock, and Aiden Deen opened the scoring with a free throw for Jessieville.

Brisonn Johnson added a fast break layup for the junior Lions, and later in the quarter he drained a 3-pointer for an 8-0 Jessieville lead after the team completed multiple passes looking for that perfect open shot.

"I thought we shared the ball pretty good against their zone," head coach Jared White said. "We played hard, and that's what we've been working. We've got to find consistency. ... Today we were much better. We played four quarters with consistent effort."

The junior Pirates came into the game without some of its players, and Dover head coach Cavin Reed said it took his team some time to get settled in the game.

"We had six kids get quarantined in the last two days, so (we) had a lot of kids, some eighth graders and ninth graders, who hadn't really touched the floor kind of get their first chance in a while to get on the floor," he said. "This wasn't a conference game, so that's helpful. So a lot of kids getting some experience, and Jessieville always has that pressure and plays real tough."

Jessieville continued its dominance in the second quarter and led 18-8 at intermission.

Kingston Morrow opened the third quarter with back-to-back layups for an early 22-8 second half lead. Following a Dover turnover, Ethan Lewis battled hard in the paint before scoring to extend the Junior Lions' lead to 16 points.

The Pirates dealt with turnovers all night, and Reed attributed that to the inexperience of his team.

"They threw it to where they knew they should throw it but didn't look, and there's a defender there or something like that, but it was a good opportunity," Reed said. "Hopefully next time we'll see them for the conference game we'll have both of our teams. I'm pretty sure their junior high also had a couple kids out. It was a good chance for some kids who haven't been on the floor to get in and get some reps."

Jessieville looked to play physical in the paint in the third quarter. Morrow pulled down an offensive rebound before getting fouled on the follow up shot. He made one of his free throws for a 25-10 lead, and Deen followed with a physical layup inside to stretch the advantage to 17 points.

"We understand how to attack the zone," White said. "Now we've just got to be able to have guys finish the plays when we get it where we want to but that's part of junior high. They've got to work on it and continue to get better. I thought the ball movement was great. They shared the ball well."

Dover slightly stopped the bleeding when Bates knocked down a wide open 3-pointer in the fourth quarter to make the scoreline 30-18. Morrow scored Jessieville's final points after making a layup while getting fouled and then sinking the following free throw.

Masters led Dover with 10 points, and Bates scored six for the junior Pirates.

"I thought we were definitely active enough," White said. "We definitely turned some defense into offense tonight. When we struggle to score that's something we've got to do. I thought we did a good job of that for sure."