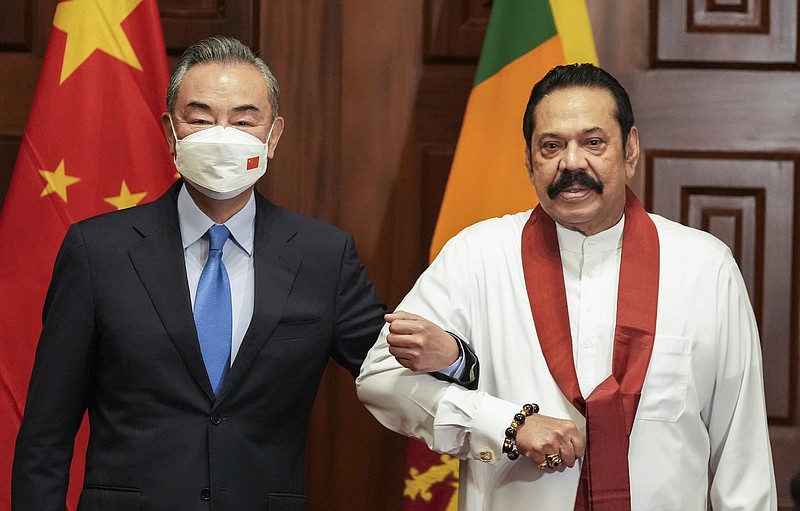 COLOMBO, Sri Lanka -- The president of debt-ridden Sri Lanka on Sunday asked China for the restructuring of its loans and access to preferential credit for imports of essential goods, as the island nation struggles in the throes of its worst economic crisis, partly due to Beijing-financed projects that don't generate revenue.

President Gotabaya Rajapaksa told visiting Chinese Foreign Minister Wang Yi that it would be "a great relief to the country if attention could be paid on restructuring the debt repayments as a solution to the economic crisis that has arisen in the face of the COVID-19 pandemic," according to a statement from his office.

Rajapaksa asked Wang for a concessionary credit facility for imports so that industries can run without disruption, the statement said. He also requested assistance to enable Chinese tourists to travel to Sri Lanka within a secure bubble.

Wang and Prime Minister Mahinda Rajapaksa, the president's brother, later visited Colombo's Port City, a reclaimed island developed with Chinese investment, where they opened a promenade and inaugurated the sailing of 65 boats to commemorate the 65 years of diplomatic relations between the two countries.

In his speech at the Port City Wang said a persistent and unchecked pandemic has made economic recovery difficult and the two countries must take the anniversary of the diplomatic ties to work closer together.

He did not elaborate nor announce any relief measures.

Wang arrived in Sri Lanka on Saturday from the Maldives on the last leg of a multinational trip that also took him to Eritrea, Kenya and the Comoros in East Africa.

Sri Lanka faces one of its worst economic crises, with foreign reserves down to around $1.6 billion, barely enough for a few weeks of imports. It also has foreign debt obligations exceeding $7 billion in 2022, including repayment of bonds worth $500 million in January and $1 billion in July.

The declining foreign reserves are partly blamed on infrastructure projects built with Chinese loans that don't make money. China loaned money to build a seaport and airport in the southern Hambantota district, in addition to a wide network of roads.

Central Bank figures show that current Chinese loans to Sri Lanka total around $3.38 billion, not including loans to state-owned businesses, which are accounted for separately and thought to be substantial.

"Technically we can claim we are bankrupt now," said Muttukrishna Sarvananthan, principal researcher at the Point Pedro Institute of Development. "When you have your net external foreign assets have been in the red, that means you are technically bankrupt."

The situation has left households grappling with severe shortages. People wait in long lines to buy essential goods like milk powder, cooking gas and kerosene. Prices have increased sharply, and the Central Bank says the inflation rate rose to 12.1% by the end of December from 9.9% in November. Food inflation increased to over 22% in the same period.

Because of a currency shortage, importers are unable to clear their cargo containing essentials and manufactures are not able to buy raw materials from overseas.

Expatriate remittances have also fallen after the government ordered the mandatory conversion of foreign currency and exchange rate controls.

Ratings agency downgrades have resulted in Sri Lanka losing much of its borrowing power. In December, Fitch Ratings noted an increased probability of credit default.

The Central Bank has added a currency swap in Chinese currency worth $1.5 billion to the reserves, but economists disagree whether it can be part of foreign reserves or not.

Wang's visit has again highlighted the regional power struggle between China and India, Sri Lanka's closest neighbor that considers the island part of its domain.

Before Wang spoke with Sri Lankan leaders, the top Indian diplomat in the country on Sunday morning inaugurated a train service from a station near Colombo to the north using compartments provided through an Indian loan facility.

He said that a recent statement by India's External Affairs Minister S Jaishankar that India would support Sri Lanka in difficult times was an affirmation of that policy in the current context.

"We can see Sri Lanka being saddled between India and China for a potential bailout package," said political analyst Ranga Kalansooriya.

"India is dragging its feet for some time while China is trying to manipulate the situation to the maximum," he added.

China considers Sri Lanka to be a critical link in its Belt and Road global infrastructure initiative. Relations were recently strained over a shipment of Chinese fertilizer that allegedly contained harmful bacteria, and business agreements that were inked with China's rivals, the United States and India.

Kalansooriya said that China was unlikely to bail Sri Lanka out of its economic crisis.

"They will look for more business opportunities, fishing in the troubled waters of economic doldrums in the country," he said.