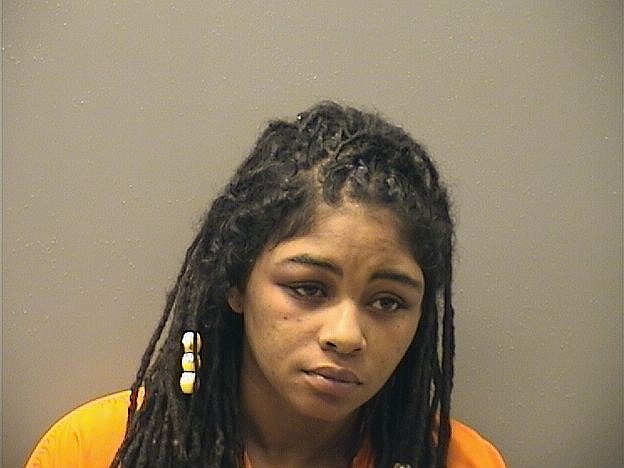 A woman arrested on misdemeanor charges Friday following a disturbance at her aunt's house was soon facing a felony escape charge after she allegedly got free from her handcuffs and jumped from a Hot Springs police patrol unit.

Starneisha G. Pitchford, 30, who lists an Omega Street address, was taken into custody shortly after 6 p.m. and charged with a felony count of third-degree escape, punishable by up to 10 years in prison, and misdemeanor counts of resisting arrest and disorderly conduct and misdemeanor warrants for harassment and failure to comply.

Pitchford, who lists no prior felony history, was being held on a $8,500 bond and was set to appear Monday in Garland County District Court. Her only prior arrest was for driving while intoxicated on Feb. 16, 2019, where she pleaded no contest and was sentenced to one year in jail with all but one day suspended and six months' probation.

According to the probable cause affidavit, around 5:45 p.m. Friday, Hot Springs police Officer 1st Class Randy Rodgers and Cpl. Nathan Rines responded to a residence on Ida Street and spoke to the homeowner, who stated her niece, identified as Pitchford, was intoxicated and being disorderly and refusing to leave.

Officers made contact with Pitchford and noted an odor of intoxicants about her and that her speech was slurred and she was unsteady on her feet. Her aunt offered to drive her home, but she reportedly refused despite repeated attempts to get her to go.

Pitchford was yelling and reportedly told the officers multiple times to "take her to jail." Other occupants in the residence began coming out due to the disturbance she was causing, so she was detained and taken to Rodgers' unit.

She allegedly tried pulling away and refused to walk at times and then refused to get in the police unit. She finally had to be physically lifted into the unit, where she continued to not cooperate. She reportedly refused to provide any ID information so it had to be obtained from her relatives at the scene.

It was determined she had warrants for her arrest for failure to comply stemming from allegations she failed to pay her fine and court costs from her DWI arrest and harassment.

While being transported to the detention center, Pitchford allegedly managed to "pull her small wrists" through her handcuffs and get the rear passenger door of the police unit open. In the 1200 block of Central Avenue, she reportedly jumped out of the unit and began running south but was caught after running about two blocks.

According to the affidavit on the harassment charge, on Nov. 30, shortly after 9 p.m., officers responded to a residence on Glade Street where a female victim stated a known suspect, identified as Pitchford, had pushed her.

She said she asked Pitchford to move, but Pitchford "came after her" and the two began fighting. They had to be separated by other family members at the scene and the woman noted that due to her child being present, she wanted to file charges so a warrant was later issued.