Hogs merciless in rout of Mizzou 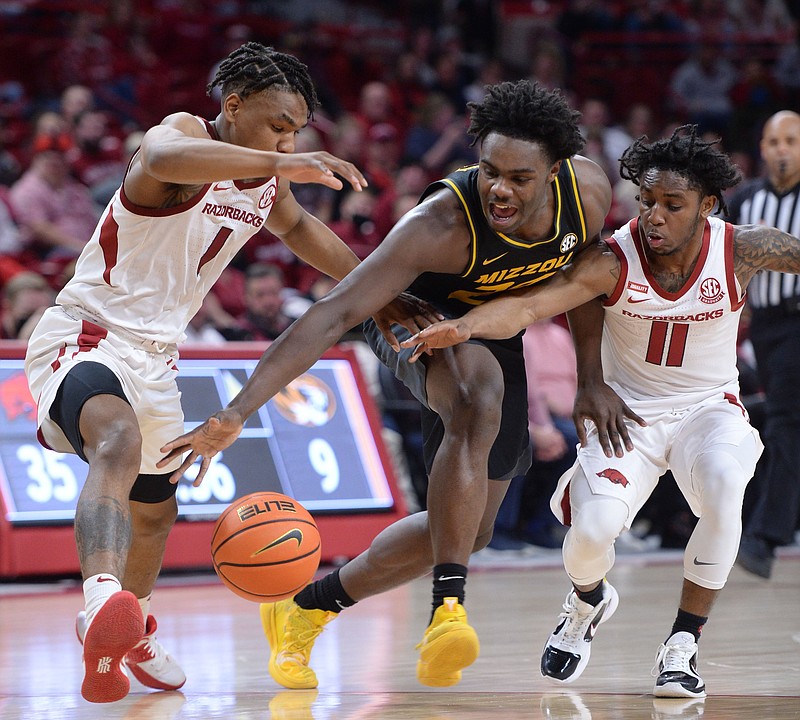 Arkansas guards JD Notae (1) and Chris Lykes (11) steal the ball Wednesday from Missouri forward Kobe Brown during the first half of play in Bud Walton Arena in Fayetteville. - Photo by Andy Shupe of NWA Democrat-Gazette

It took a lot longer than expected, but the University of Arkansas basketball team got its first Southeastern Conference victory of the season.

Arkansas built a 34-point halftime lead, maintained its intensity in the second half and pounded Missouri 87-43 on Wednesday night in Bud Walton Arena.

"Whatever it takes to win --that was the mindset," said Arkansas senior forward Trey Wade, a transfer from Wichita State who had a season-high 17 points. "We came in, we tried to play as hard as we can.

"We tried to play team basketball. I think we took a step forward tonight."

The Razorbacks, who won their first game in 23 days, since beating Elon 81-55 on Dec. 21, took out a lot of frustration on the Tigers.

"Tough night," Missouri coach Cuonzo Martin said. "I think it is safe to say that I didn't see it coming, but give those guys credit for playing well from start to finish."

Rather than suffer a second-half letdown with such a big lead, the Razorbacks kept pouring it on.

"We know that games like this don't happen often," Arkansas coach Eric Musselman said. "I can't remember a league game in any league I've ever coached where a team played so well for 40 minutes.

"We played as hard as our team did last year."

Arkansas advanced to the NCAA Tournament Elite Eight last season for the first time since 1995.

"To be honest, I wasn't even looking at the scoreboard," Wade said of how Arkansas continued to pummel the Tigers. "I was so locked in on the game.

Senior guard JD Notae led Arkansas with 19 points, but it was his passing that got the Razorbacks off to a hot start.

Notae had assists on Arkansas' first two possessions for a short jumper in the lane by sophomore forward Jaylin Williams and layup by junior forward Kamani Johnson.

"That's kind of what a point guard is supposed to do -- get your players going," Wade said. "Once your players are going, it's the basketball Gods."

Sophomore guard Davonte Davis had 15 points, six rebounds and four assists off the bench for Arkansas.

Missouri junior forward Kobe Brown, who had 30 points and 13 rebounds against Alabama to earn SEC player of the week honors, was held to six points and six rebounds by the Razorbacks. He shot 3 of 11 from the field.

"We shrunk the floor," Musselman said of shutting down Brown. "We gave help. Tried to let him see a wall.

The 44-point final margin was the second largest for Arkansas over Missouri, surpassed only by a 52-point victory, 120-68, in the dedication game for Walton Arena on Dec. 2, 1993, when the Tigers were in the Big 8.

Arkansas went on to win the 1994 national championship.

The Razorbacks also achieved their second-largest margin of victory in an SEC game. They beat Mississippi State by 57 points, 115-58, in 1993 in Barnhill Arena.

"They out-toughed us the whole night," said Missouri senior guard Javon Pickett, who had a team-high 12 points. "That's really what happened."

Arkansas had 13 steals -- three each by Davis and Wade -- among 23 Missouri turnovers.

The Razorbacks outscored the Tigers 26-4 in points off of turnovers.

Arkansas shot exactly 50% from the field (32 of 64) and had eight turnovers to match its season-low against the University of Arkansas at Little Rock.

It was in stark contrast to the Razorbacks' 86-81 loss at Texas A&M on Saturday when they had a season-high 18 turnovers.

"That was one of the keys to the gameplan, taking care of the ball," Davis said. "We did that, and you see how the game turned out for us."