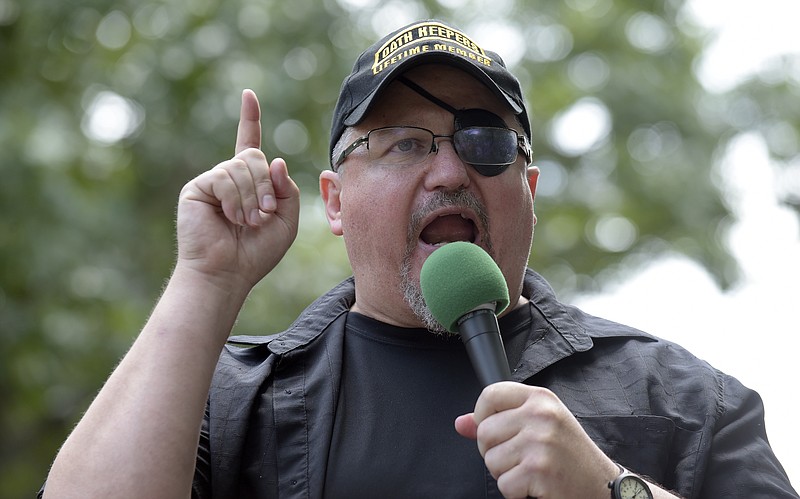 FILE - In this Sunday, June 25, 2017 file photo, Stewart Rhodes, founder of the Oath Keepers, speaks during a rally outside the White House in Washington. Rhodes has been arrested and charged with seditious conspiracy in the Jan. 6 attack on the U.S. Capitol. The Justice Department announced the charges against Rhodes on Thursday. (AP Photo/Susan Walsh, File)

WASHINGTON -- Stewart Rhodes, the founder and leader of the far-right Oath Keepers militia group, and 10 other members or associates have been charged with seditious conspiracy in the violent attack on the U.S. Capitol, authorities said Thursday.

Despite hundreds of charges already brought in the year since pro-Trump rioters stormed the Capitol in an effort to stop the certification of President Joe Biden's 2020 election victory, these were the first seditious conspiracy charges levied in connection with the attack on Jan. 6, 2021.

It marked a serious escalation in the largest investigation in the Justice Department's history -- more than 700 people have been arrested and charged with federal crimes -- and highlighted the work that has gone into piecing together the most complicated cases. The charges rebut, in part, the growing chorus of Republican lawmakers who have publicly challenged the seriousness of the insurrection, arguing that since no one had been charged yet with sedition or treason, it could not have been so violent.

The indictment alleges Oath Keepers for weeks discussed trying to overturn the election results and preparing for a siege by purchasing weapons and setting up battle plans. They repeatedly wrote in chats about the prospect of violence and the need, as Rhodes allegedly wrote in one text, "to scare the s---out of" Congress. And on Jan. 6, the indictment alleges, they entered the Capitol building with the large crowds of rioters who stormed past police barriers and smashed windows, injuring dozens of officers and sending lawmakers running.

Authorities have said the Oath Keepers and their associates worked as if they were going to war, discussing weapons and training. Days before the attack, one defendant suggested in a text message getting a boat to ferry weapons across the Potomac River to their "waiting arms," prosecutors say.

On Jan. 6, several members, wearing camouflaged combat attire, were seen on camera shouldering their way through the crowd and into the Capitol in a military-style stack formation, authorities say.

The indictment against Rhodes alleges Oath Keepers formed two teams, or "stacks," that entered the Capitol. The first stack split up inside the building to separately go after the House and Senate. The second stack confronted officers inside the Capitol Rotunda, the indictment said. Outside Washington, the indictment alleges, the Oath Keepers had stationed two "quick reaction forces" that had guns "in support of their plot to stop the lawful transfer of power."

Rhodes, 56, of Granbury, Texas, is the highest-ranking member of an extremist group to be arrested in the deadly siege. He and Edward Vallejo, 63, of Phoenix, Arizona, were arrested on Thursday. The nine others were already facing criminal charges related to the attack.

Sedition charges are difficult to win and rarely used, but defendants face steep prison time of 20 years if convicted, compared with five for the other conspiracy charges. The last time U.S. prosecutors brought such a seditious conspiracy case was in 2010 in an alleged Michigan plot by members of the Hutaree militia to incite an uprising against the government. But a judge ordered acquittals on the sedition conspiracy charges at a 2012 trial, saying prosecutors relied too much on hateful diatribes protected by the First Amendment and didn't, as required, prove the accused ever had detailed plans for a rebellion.

Among the last successful convictions for seditious conspiracy stemmed from another, now largely forgotten storming of the Capitol in 1954, when four Puerto Rican nationalists opened fire on the House floor, wounding five representatives.

Rhodes did not enter the Capitol building on Jan. 6 but is accused of helping put into motion the violence. Jonathan Moseley, an attorney who said he represented Rhodes, said Rhodes was supposed to testify before the House committee investigating the Jan. 6 insurrection in a deposition but it got called off.

"He has been subject to a lot of suspicion to why he wasn't indicted," so far in the Jan. 6 riot, Moseley said. "I don't know if this is in response to those discussions, but we do think it's unfortunate. It's an unusual situation."

A second attorney representing the group, Kellye SoRelle, said she was issuing a statement later and said Mosley did not represent Rhodes.

Rhodes has said in interviews with right-wing hosts that there was no plan to storm the Capitol and that the members who did so went rogue. But he has continued to push the lie that the 2020 election was stolen, while posts on the Oath Keepers website have depicted the group as a victim of political persecution.

Other defendants in the conspiracy have argued in court that the only plan was to provide security at the rally before the riot or protect themselves against possible attacks from far-left antifa activists.

Rhodes has appeared in court documents in the conspiracy case for months as "Person One."

Authorities say he held a GoToMeeting call days after the election, telling his followers to go to Washington and let then President Donald Trump know "that the people are behind him." Rhodes told members they should be prepared to fight antifa and that some Oath Keepers should "stay on the outside" and be "prepared to go in armed" if necessary.

"We're going to defend the president, the duly elected president, and we call on him to do what needs to be done to save our country. Because if you don't guys, you're going to be in a bloody, bloody civil war, and a bloody -- you can call it an insurrection or you can call it a war or fight," Rhodes said, according to court documents.

Authorities have said Rhodes was part of an encrypted Signal chat with Oath Keepers from multiple states leading up to Jan. 6 called "DC OP: Jan 6 21" and it showed the group was "activating a plan to use force" that day.

On the afternoon of the 6th, authorities say Rhodes told the group over Signal: "All I see Trump doing is complaining. I see no intent by him to do anything. So the patriots are taking it into their own hands. They've had enough."

Around 2:30 p.m., Rhodes had a 97-second phone call with Kelly Meggs, the reputed leader of the group's Florida chapter, who was part of the military-style stack, authorities say. About 10 minutes later, Rhodes sent a photo to the group showing the southeast side of the Capitol with the caption, "South side of US Capitol. Patriots pounding on doors." Around that same time, those in the stack formation forcibly entered the Capitol, prosecutors say.

Rhodes was arrested in Little Elm, a suburb about 35 miles north of Dallas. He was booked into the Collin County Detention Center, where a sheriff's deputy said that local jail officials could not make Rhodes available to speak with a reporter because he was arrested by federal agents.

He was expected in court Friday in Texas.

More than 70 defendants remain detained on riot charges. At least 183 defendants have pleaded guilty to riot-related charges as of Jan. 11. At least 78 of them have been sentenced, including 35 people who received jail or prison sentences or time already served. 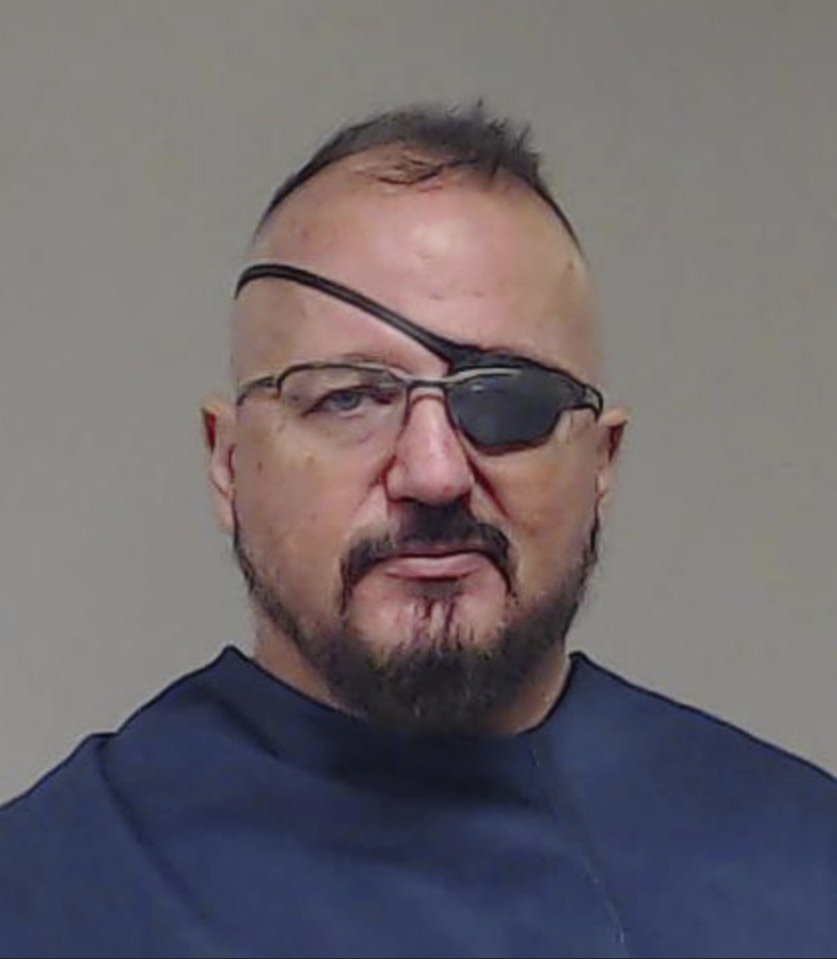 This undated photo provided by the Collin County Sheriff's Office shows Stewart Rhodes. Prosecutors have filed seditious conspiracy charges on Thursday, jan. 13, 2022, against Rhodes, the leader of the far-right Oath Keepers militia group and 10 suspected associates. It's the first such case in the U.S. Capitol riot and one of just a few in the nation's history.(Collin County Sheriff's Office via AP) 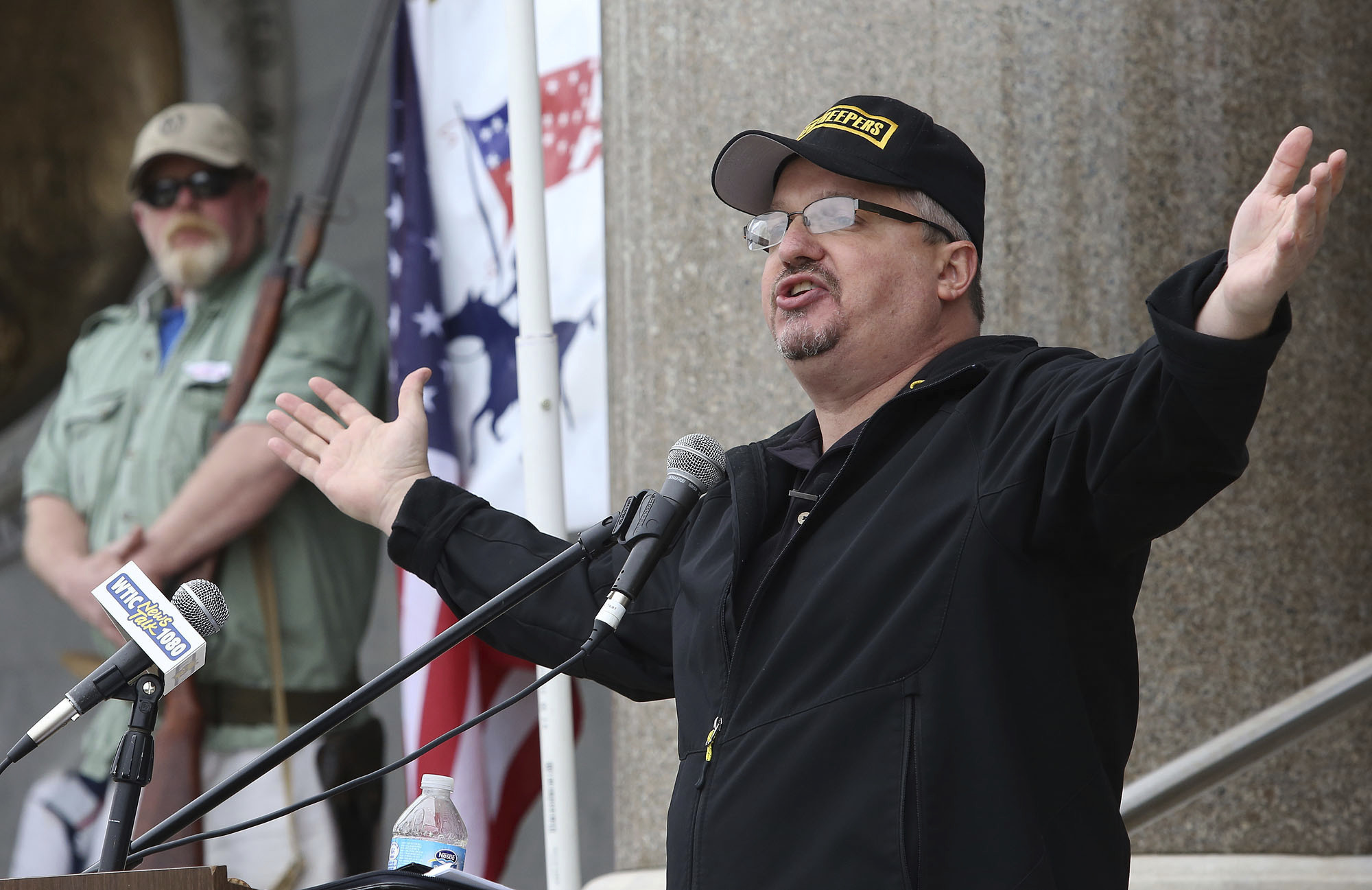 FILE - Stewart Rhodes, founder of Oath Keepers, speaks during a gun rights rally at the Connecticut State Capitol in Hartford, Conn., Saturday April 20, 2013. Rhodes has been arrested and charged with seditious conspiracy in the Jan. 6 attack on the U.S. Capitol. The Justice Department announced the charges against Rhodes on Thursday. (AP Photo/Journal Inquirer, Jared Ramsdell, File) MANDATORY CREDIT