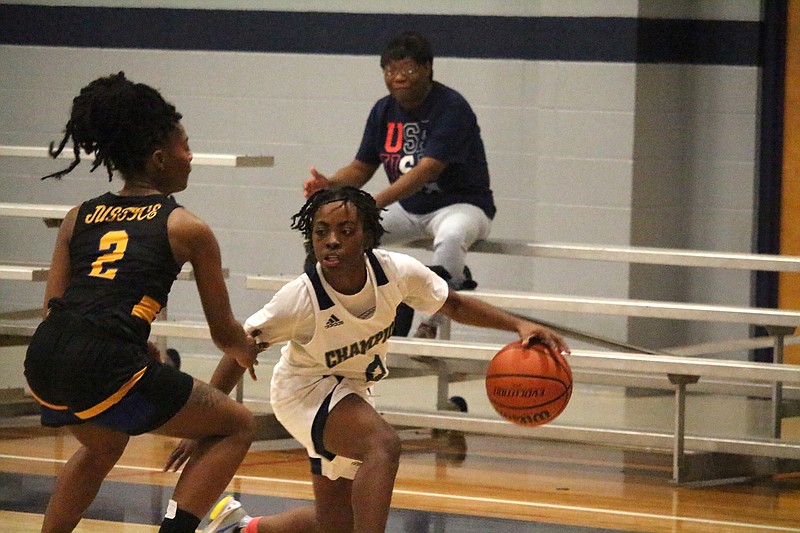 The Falcons just had five players available, and the Tigers were able to pull away easily after the first quarter of the game.

The Tigers scored their first seven points of the contest off Kansas Christian turnovers. Sckiya Banister opened the scoring for Champion Christian with a transition basket before Nay Manning knocked down a deep 3-pointer for an early 5-0 lead.

Destiny Gonzalez capped off the run with a basket in the paint before Brendeja Holloman scored the Falcons' first points of the game with 7:56 remaining on the first quarter clock.

The Tigers continued their first quarter dominance when a cross court pass from Manning found Elisa Gonzalez wide open under the basket for a 17-2 edge.

Taking advantage of Kansas Christian's low numbers, the Tigers rotated five new players into the game at the 5:30 mark in the first quarter.

Champion Christian continued to dominate even with the complete lineup change, and Justys Irish-Holmes extended the Tigers' lead with an offensive rebound and putback for a 22-6 advantage.

The Falcons started to show some signs of life toward the end of the first quarter when Holloman made back-to-back shots in the paint to cut Champion Christian's lead to 14 points.

Melissah Henderson drained a trey just a few possessions later, and an offensive rebound followed by a basket from Holloman brought Kansas Christian within 26-16.

However, the Tigers got the final say in the opening 10 minutes when Aaliyiah Clark knocked down a buzzer-beating 3-pointer to give Champion Christian a 29-16 lead heading into the second quarter.

The Tigers really took control in the second quarter and jumped out to a 54-29 lead before intermission.

Champion Christian started the second half on a pass from Destiny Gonzalez to Elisa Gonzalez who finished easily at the basket.

Henderson managed to knock down a jumper for the Falcons before the Tigers would go on a 15-0 run to extend their lead to 42 points.

Banister started the run with a steal before she drove to the basket for an easy layup. Then Banister struck again, stepping her way past defenders to the hoop for a 62-31 lead.

The turnovers plagued Kansas Christian again, and Imani Honey recorded a steal before making a good pass to Elisa Gonzalez for the easy finish. Clark scored the final points of the monster run with a shot in the paint for a 73-31 lead with 3:53 to play in the third quarter.

The Tigers went into the game's final 10 minutes with an 82-33 advantage.

Champion Christian closed out the contest with a flurry of 3-pointers. Rebecca Farmer knocked down her trey as the Tigers reached a century on the night.

Irish-Holmes tacked on a beyond-the-arc shot of her own before Farmer added another 3-pointer for a 106-44 edge. Jaylen Edmonson set the final with yet another 3-point basket.

Hollomon led Kansas Christian with 18 points and Monique Hunt scored 15 for the Falcons.