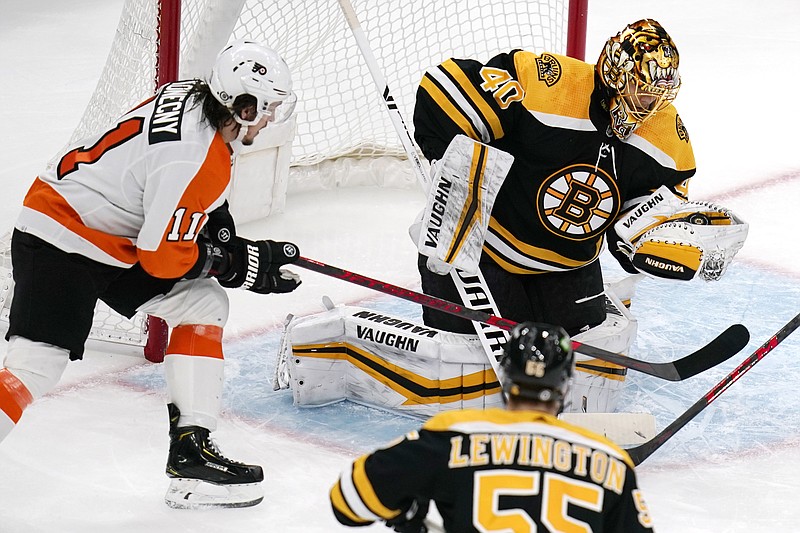 Boston Bruins goaltender Tuukka Rask (40) gloves the puck for a save as Philadelphia Flyers right wing Travis Konecny (11) waits for a rebound during the first period of an NHL game Thursday in Boston. – Photo by Charles Krupa of The Associated Press

BOSTON -- David Pastrnak scored a hat trick, Tuukka Rask made 24 saves in his return from hip surgery and the Boston Bruins beat the Philadelphia Flyers 3-2 on Thursday night.

Rask, the winningest goalie in franchise history, made his season debut after recovering from surgery last summer to repair a torn labrum. Rask was solid in net and got plenty of help from his teammates, who held Philadelphia to 27 shots as the Bruins won their fourth straight and seventh in eight games.

Cam Atkinson and Joel Farabee scored for Philadelphia, which lost its sixth in a row. Carter Hart finished with 33 saves, keeping the Flyers close despite a listless start.

Pastrnak completed his 11th career hat trick with a power-play goal late in the second period after Philadelphia had scored twice to tie it.

Anthony Cirelli, Boris Katchouk and Brayden Point also scored for the Lightning. Katchouk made it 3-1 at 11:24 of the third period during a 2-on-0, and Vasilevskiy stopped Elias Pettersson's breakaway after the ensuing faceoff.

Matthew Highmore and Tyler Motte each had a goal and an assist, and Thatcher Demko stopped 17 shots for the Canucks, who are 8-2-1 since Bruce Boudreau replaced Travis Green as coach last month.

Chris Kreider got his first career short-handed goal and an empty-netter to reach 200 goals as the Rangers followed up a 1-0 victory over the Sharks at home on Dec. 3 with another shutout less than six weeks later.

Adin Hill stopped 27 shots for the Sharks, who failed in their attempt to match a season-high four-game winning streak. San Jose has lost seven straight against the Rangers.

Shesterkin was activated from the COVID-19 list earlier in the day and was sharp in his first action since Jan. 2, when he had a 38-save shutout against Tampa Bay.

LOS ANGELES -- Mikey Anderson, Viktor Arvidsson and Anze Kopitar scored in a span of 1:23 of the third period, and Los Angeles downed Pittsburgh for its third straight victory.

Dustin Brown had a goal and an assist to reach 700 career points. Sean Durzi had a goal and two assists, and the Kings went 5-2-0 on their seven-game homestand. Jonathan Quick made 27 saves.

The Hurricanes were shut out for the first time this season.

Carolina goalie Frederik Andersen gave up four goals on 32 shots before being pulled after Laine and Chinakhov scored 32 seconds apart early in the third period.

Josh Bailey and Adam Pelech also scored, and Zach Parise added two assists for the Islanders. New York extended its point streak to five games (4-0-1). Ilya Sorokin made 30 saves in his ninth win of the season.

Yegor Sharangovich and Nathan Bastian scored as the Devils lost for the third time in four games. Jon Gillies made 22 saves in his first start since Dec. 19.

Lane Lambert led the Islanders behind the bench with coach Barry Trotz in COVID-19 protocol.

DETROIT -- Connor Hellebuyck made 33 saves for his second shutout of the season and Andrew Copp scored twice in Winnipeg's victory over Detroit.

Kyle Connor added an empty-net goal to cap Winnipeg's first game since a 7-1 loss in Colorado a week ago and just its fourth since Dec. 19. The Jets, who dressed six players on emergency recall, had seven postponements during that stretch.

Alex Nedeljkovic stopped 29 shots for the Red Wings, shut out for the fifth time this season.

ST. LOUIS -- Robert Thomas and Pavel Buchnevich scored in the third period as St. Louis came back to beat Seattle.

Ville Husso made 31 saves and the Blues extended their home point streak to 13 games, going back to Nov. 18. It is the third-longest stretch in franchise history.

Alex Wennberg scored and Chris Driedger made 25 saves for the expansion Kraken, who lost for the sixth time in seven games.

Buchnevich's power-play goal off a slick no-look pass from Ivan Barbashev at 5:30 of the third period gave the Blues the lead. St. Louis has an NHL-best 13 comeback wins this season.

Mark Jankowski and Vinnie Hinostroza also scored for the Sabres, who snapped a six-game losing streak.

Matt Duchene had the lone goal and Juuse Saros made 17 saves for the Western Conference-leading Predators, who had won five straight.

Dell earned his first victory of the season against five losses.

Montreal, a Stanley Cup finalist last season, has dropped five straight and is 1-9-3 in its past 13 games. The Canadiens are 7-24-5 overall, leaving them at the bottom of the NHL standings.

Dominik Kubalik and Patrick Kane also scored for the Blackhawks, who won their third in a row. Marc-Andre Fleury stopped 27 shots.

Jeff Petry and Mike Hoffman scored for Montreal, and Sam Montembeault made 28 saves.

CALGARY, Alberta -- Nick Paul scored twice in the first period, Matt Murray made 27 saves for his first victory of the season and Ottawa beat Calgary.

Matthew Tkachuk scored for Calgary, and Jacob Markstrom stopped 30 shots. The Flames have lost four in a row and are 2-7-1 in their last 10.

The Flames played at home for the first time since Dec. 11, following postponements caused by a COVID-19 outbreak and capacity restrictions. 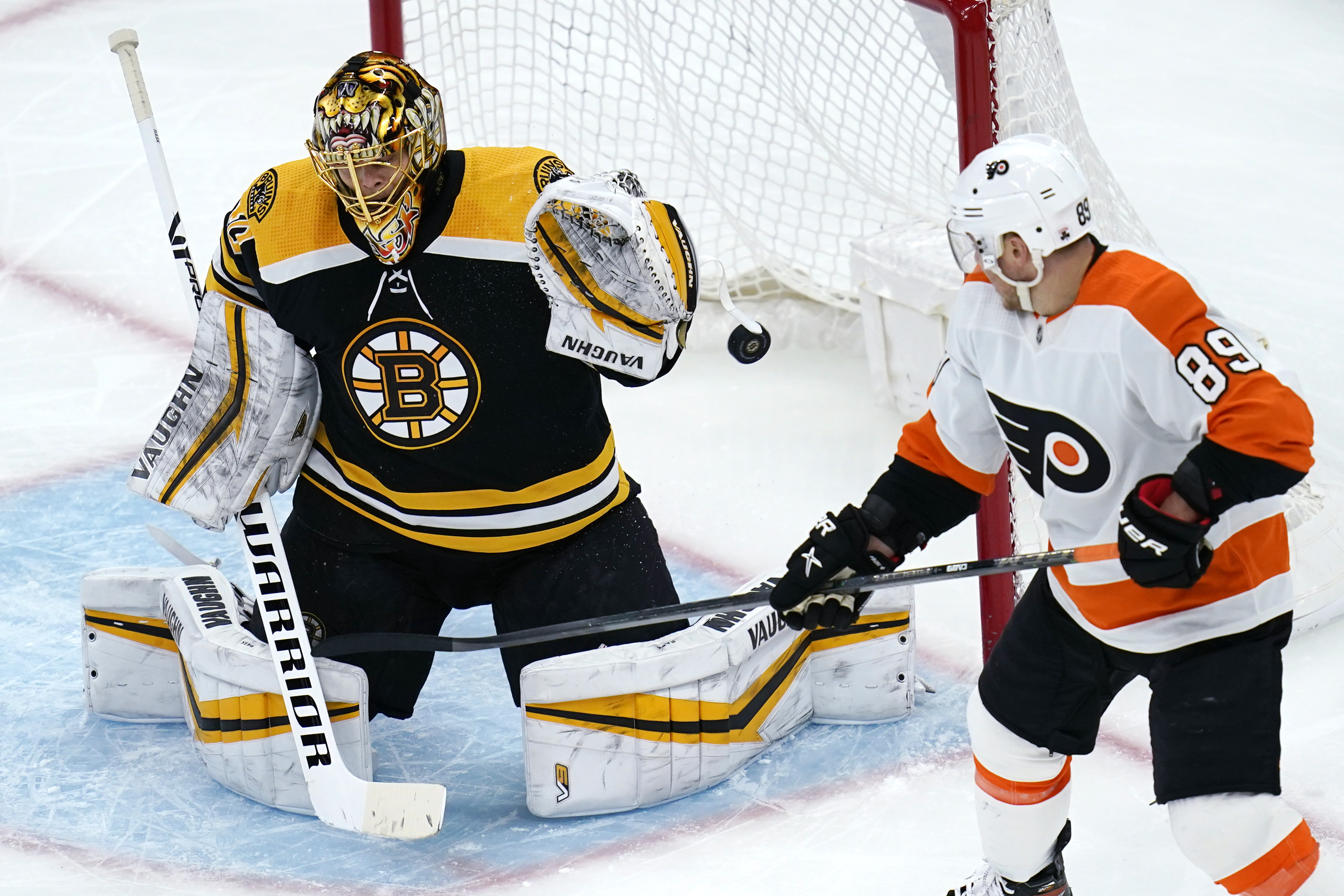 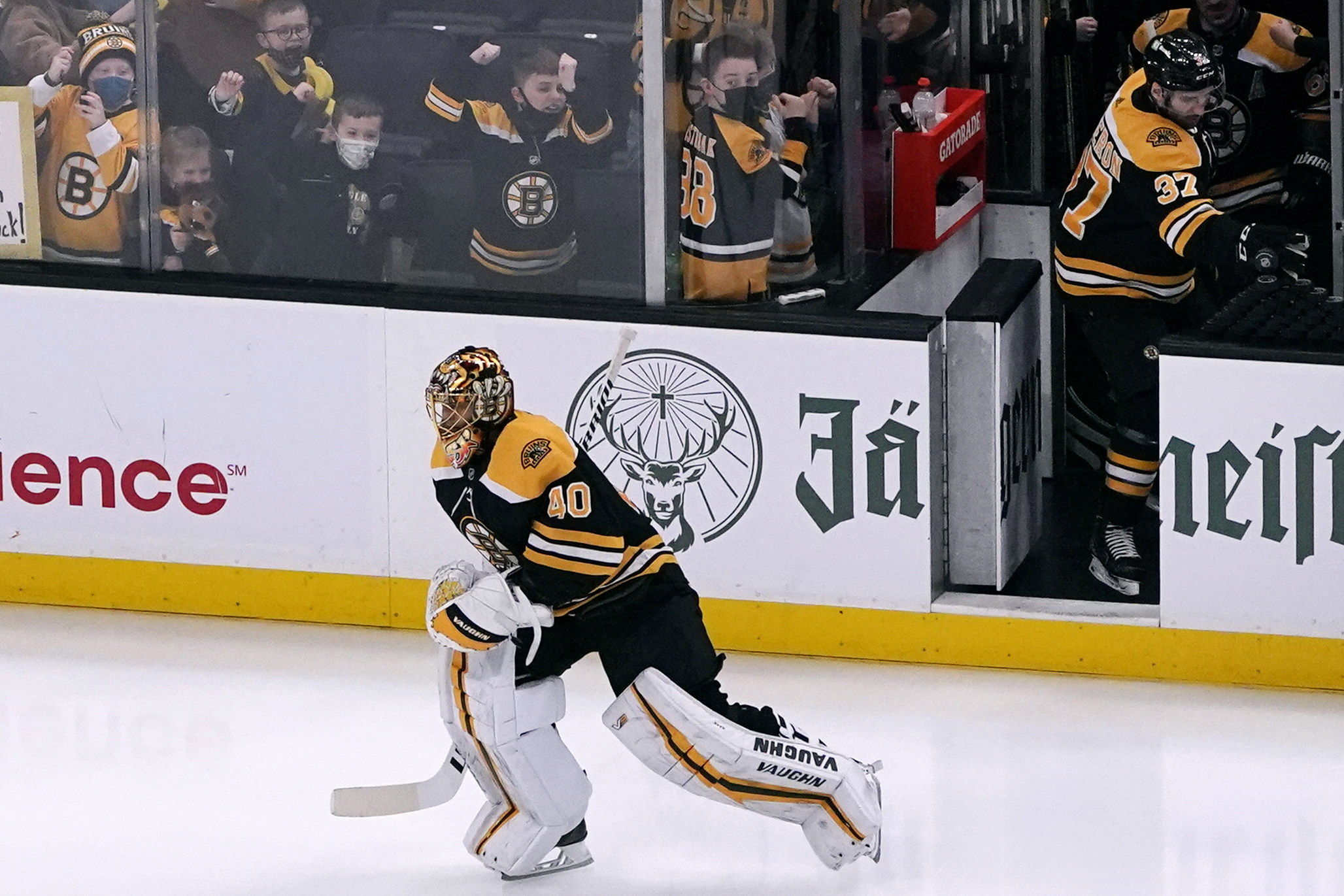 Boston Bruins goaltender Tuukka Rask (40) heads toward the crease during a warm-up session prior to the first period of an NHL hockey game against the Philadelphia Flyers, Thursday, Jan. 13, 2022, in Boston. The Bruins signed Rask for the rest of the season on Tuesday Jan. 11, 2022, bringing back the winningest goalie in franchise history after he recovered from offseason hip surgery. (AP Photo/Charles Krupa) 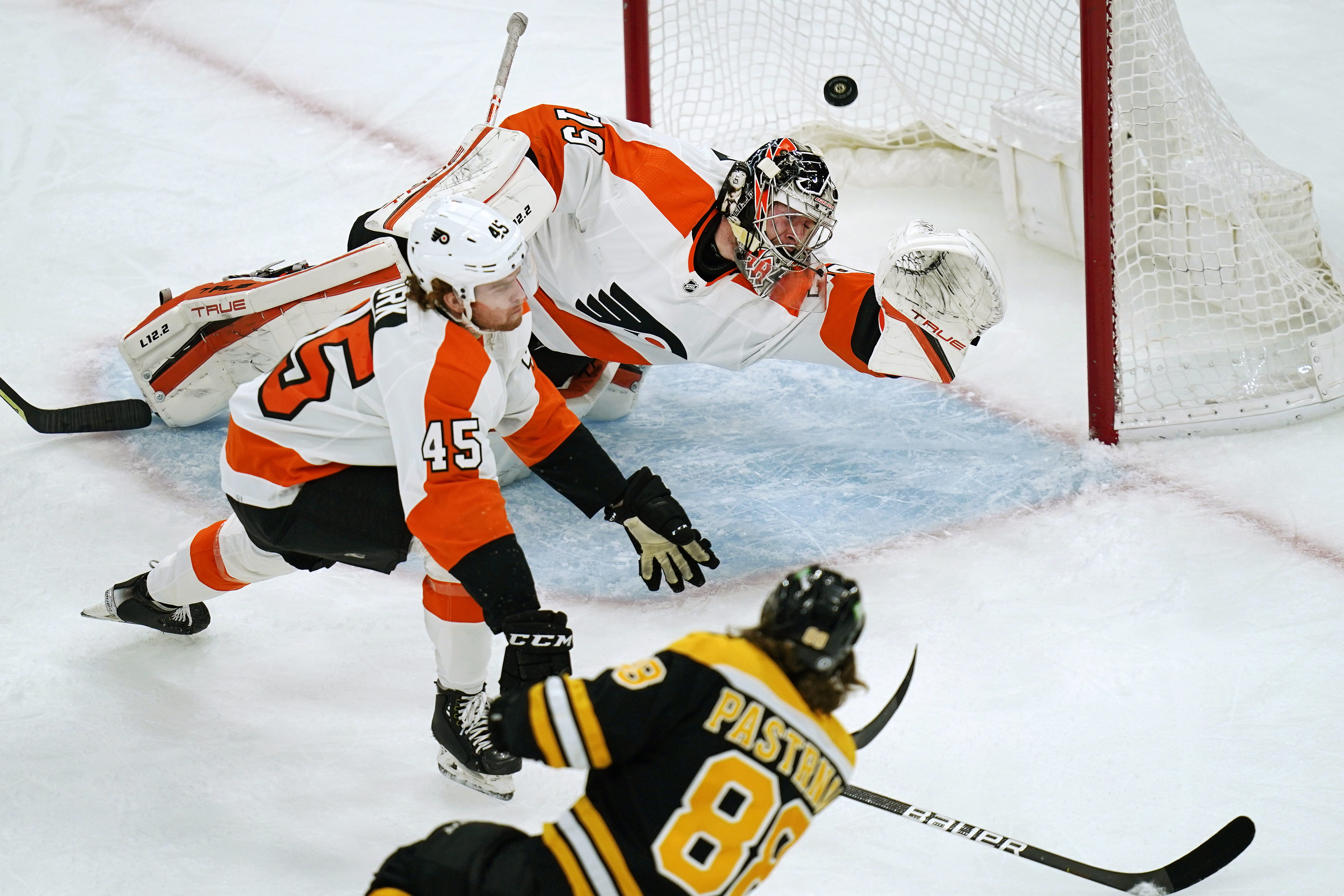 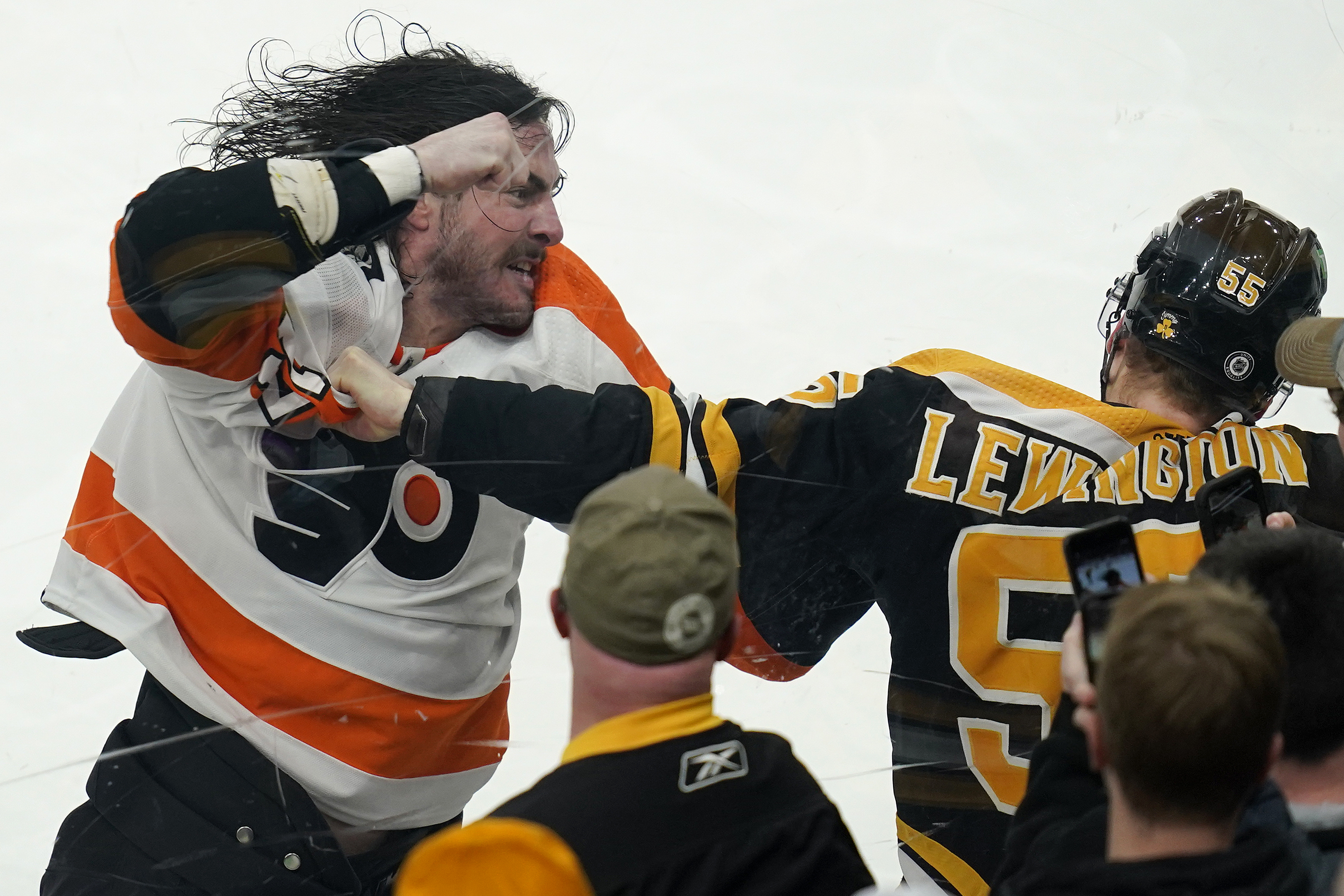