Tigers pull away from Falcons late 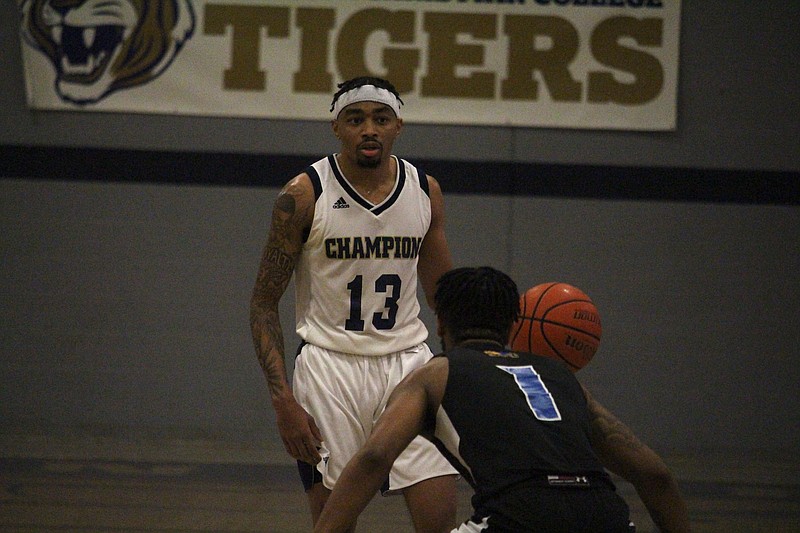 After both teams looked a little sluggish out of the break, Raquan Frazier completed a spin move in the paint before nailing his shot to bring the contest within 56-54 with just under 11 minutes remaining.

Champion Christian responded with a big block from Malik Laurent on one end of the court. On the offensive end, K.J. Corder made a kick out pass to Kyle Malone who knocked down a trey for a 59-54 edge.

Despite the momentum 3-ball, the Falcons brought the game within 59-57 after a long-range 3-pointer from Jackson Hall early in the second half.

Champion Christian responded and extended to its lead a few possessions later on a steal and basket from A.J. Williams. Now ahead 63-57, Williams forced Kansas Christian into a timeout with the big play.

It looked like the Tigers might start pulling away when Williams found Laurent, who finished calmly at the basket for a 69-61 lead.

However, the Falcons responded with a free throw, and after Laurent missed a shot at the rim, Kansas Christian added two more free throws to bring the game within five.

Leading 71-66 and looking to take control of the game, Malone drained a huge 3-pointer for the Tigers with 2:55 to play.

Malone continued to impact the game with a fast break basket for a 76-67 Champion Christian lead. Williams got the crowd on its feet and really gave the Tigers all the momentum when the junior stole the ball, dribbled down the court and slammed home a one-handed dunk for a 78-68 lead.

From that point on, Champion Christian really put the game to bed at the free throw line. With 1:08 left to play, Braylon Hawkins made two free throws to extend the Tigers' lead to 12 points.

Williams went to the line with 38 seconds remaining on the clock and drained two more to give Champion Christian an 83-72 edge. The Dallas native went to the line again just 10 seconds later and added two more free throws to put the game out of reach.

Hawkins scored Champion Christian's final two points of the game at the line, and Javarius Washington set the final with a basket for the Falcons.

Washington led Kansas Christian with 15 points, Elazar Conley scored 14 and both Frazier and Vince Smith tallied 12 points for the Falcons.