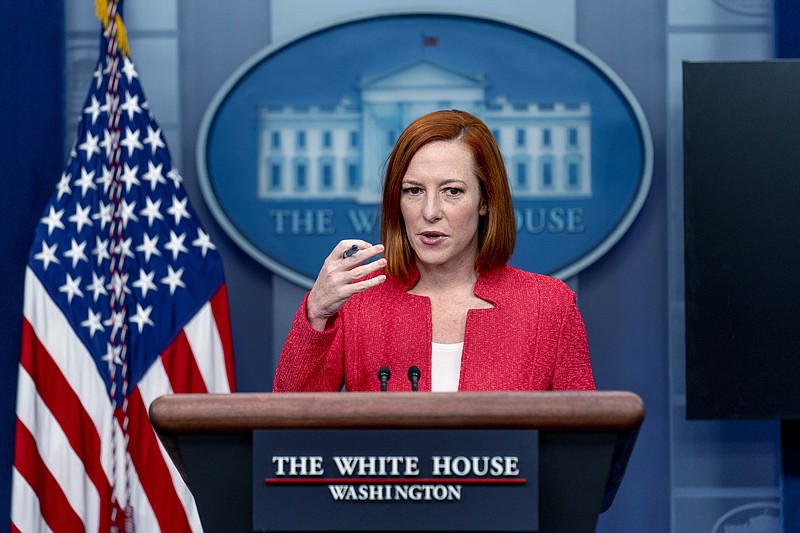 WASHINGTON -- U.S. intelligence officials have determined a Russian effort is underway to create a pretext for its troops to further invade Ukraine, and Moscow has already prepositioned operatives to conduct "a false-flag operation" in eastern Ukraine, according to the White House.

White House press secretary Jen Psaki said on Friday the intelligence findings show Russia is also laying the groundwork through a social media disinformation campaign that frames Ukraine as an aggressor that has been preparing an imminent attack against Russian-backed forces in eastern Ukraine.

Psaki charged that Russia has already dispatched operatives trained in urban warfare who could use explosives to carry out acts of sabotage against Russia's own proxy forces -- blaming the acts on Ukraine -- if Russian President Vladimir Putin decides he wants to move forward with an invasion.

"We are concerned that the Russian government is preparing for an invasion in Ukraine that may result in widespread human rights violations and war crimes should diplomacy fail to meet their objectives," Psaki said.

Pentagon spokesman John Kirby described the intelligence as "very credible." A U.S. official, who was not authorized to comment on the intelligence and spoke on condition of anonymity, said much of it was gleaned from intercepted communications and observations of the movements of people.

The U.S. intelligence findings, which were declassified and shared with U.S. allies before being made public, estimate that a military invasion could begin between mid-January and mid-February.

The new U.S. intelligence was unveiled after a series of talks between Russia and the U.S. and its Western allies this week in Europe aimed at heading off the escalating crisis made little progress.

White House national security adviser Jake Sullivan on Thursday said the U.S. intelligence community has not made an assessment that the Russians, who have massed some 100,000 troops on Ukraine's border, have definitively decided to take a military course of action.

But Sullivan said Russia is laying the groundwork to invade under false pretenses should Putin decide to go that route. He said the Russians have been planning "sabotage activities and information operations" that accuse Ukraine of prepping for its own imminent attack against Russian forces in eastern Ukraine.

He said this is similar to what the Kremlin did in the lead-up to Russia's 2014 annexation of Crimea, the Black Sea peninsula that had been under Ukraine's jurisdiction since 1954.

The Crimea crisis came at moment when Ukraine was looking to strengthen ties with the West. Russia had stepped up propaganda that Ukraine's ethnic Russians were being oppressed in eastern Ukraine.

Russia has long been accused of using disinformation as a tactic against adversaries in conjunction with military operations and cyberattacks. In 2014, Russian state media tried to discredit pro-Western protests in Kyiv as "fomented by the U.S. in cooperation with fascist Ukrainian nationalists" and promoted narratives about Crimea's historical ties to Moscow, according to a report by Stanford University's Internet Observatory.

Efforts to directly influence Ukrainians appear to have continued during the ongoing conflict in eastern Ukraine, in which at least 14,000 people have died. The Associated Press reported in 2017 that Ukrainian forces in the east were constantly receiving text messages warning that they would be killed and their children would be made orphans.

Nina Jankowicz, a global fellow at the Washington-based Wilson Center, said Russia's disinformation efforts have evolved between the lead-up to its annexation of Crimea and now. This time, the Kremlin appears to be driving anti-Ukraine narratives with top officials making bellicose public statements, said Jankowicz, author of "How To Lose the Information War: Russia, Fake News, and the Future of Conflict."

"The officials are setting the tone for the state media and they're just running with it," she said.

So-called "troll farms" that post fake comments are less influential in part because social media companies have gotten better at stopping them, she said. Russian efforts on social media often play on existing doubts in Ukrainian society about whether the U.S. will support Ukraine in a conflict and whether the West can be trusted, she said.

The U.S. intelligence community has taken note of a buildup on social media by Russian influencers justifying intervention by emphasizing deteriorating human rights in Ukraine, suggesting an increased militancy of Ukrainian leaders and blaming the West for escalating tensions.

The Russians, while maintaining they don't plan to invade Ukraine, are demanding that the U.S. and NATO provide written guarantees that the alliance will not expand eastward. The U.S. has called such demands nonstarters but said that it's willing to negotiate with Moscow about possible future deployments of offensive missiles in Ukraine and putting limits on U.S. and NATO military exercises in Eastern Europe.

Foreign Minister Sergey Lavrov warned on Friday that Moscow wouldn't wait indefinitely for the Western response, saying he expects the U.S. and NATO to provide a written answer next week.

Lavrov described Moscow's demands for binding guarantees that NATO will not embrace Ukraine or any other former Soviet nations, or station its forces and weapons there, as essential for the progress of diplomatic efforts to defuse soaring tensions over Ukraine.

He argued that NATO's deployments and drills near Russia's borders pose a security challenge that must be addressed immediately.

"We have run out of patience," Lavrov said at a news conference. "The West has been driven by hubris and has exacerbated tensions in violation of its obligations and common sense." 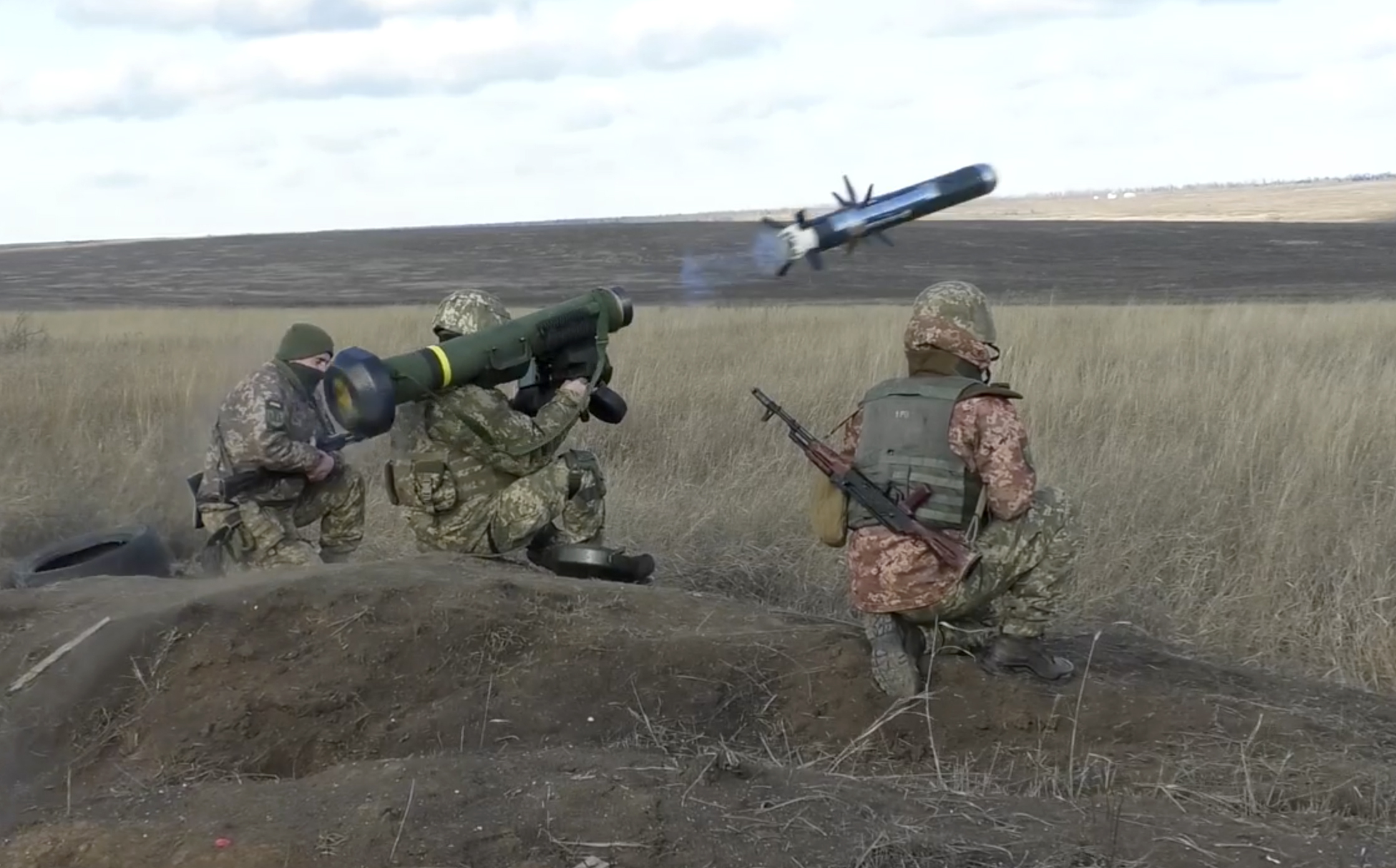 In this image taken from footage provided by the Ukrainian Defense Ministry Press Service, a Ukrainian soldiers use a launcher with US Javelin missiles during military exercises in Donetsk region, Ukraine, Wednesday, Jan. 12, 2022. President Joe Biden has warned Russia's Vladimir Putin that the U.S. could impose new sanctions against Russia if it takes further military action against Ukraine. (Ukrainian Defense Ministry Press Service via AP)