LISTEN: CMS, Hot Springs trying to get legs back after postponed games 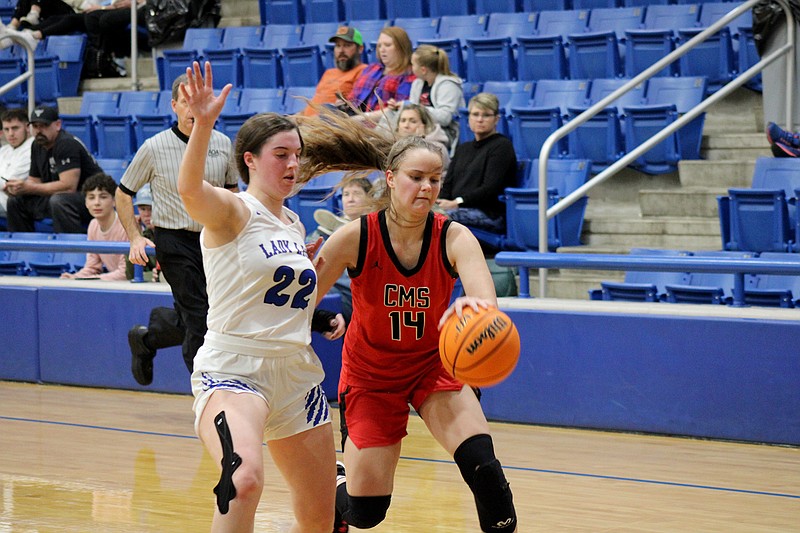 Cutter Morning Star's Sierra Wilmath (14) drives down the court as Jessieville's Alyssa Stultz (22) defends during the Larry Ray Memorial Tournament at Jessieville on Dec. 30, 2021. - Photo by James Leigh of The Sentinel-Record

With most of the teams in the county feeling the effects of COVID-19, either within their own program or their opponents' programs, coaches at Cutter Morning Star and Hot Springs have been trying to make sure to keep their athletes healthy and prepared as the season nears the midpoint.

Cutter Morning Star's boys basketball team got off to a 4-0 start in 2A-7 play before the Eagles felt the effects of COVID-19.

Eagles head coach Beau Brickell said that less than two weeks ago his team was feeling good about heading into the bulk of the conference season. However, after cancellations to games, the future is uncertain.

"We kinda come off our Christmas break, and we come out and play Caddo Hills in probably one of our better games," Brickell said. "Kind of felt like, 'Man this is great. We can kinda start hitting our stride.' Then of course the COVID stuff hits. At this point it's kind of an unknown."

Brickell said he simply did not know how his team was shaping up heading into the rest of the conference season.

However, he emphasized the 62-49 victory over Caddo Hills while highlighting an important matchup against Mountain Pine on Tuesday.

"I'm excited about the group of kids we have," Brickell said. "I really felt like we did a good job that Tuesday night coming out of Christmas break. Then obviously when you take two weeks off, you don't know how it'll be when you come back."

Moving forward, the Eagles look to simplify their offense and really focus on the details on both ends of the court.

"Just little bitty things that we wanted to clean up coming outside of Christmas break that again, we did a really good job of the one night we've been able to play in January," Brickell said.

Heading into the main part of the conference season, the Eagles have already looked toward the future and postseason play.

"It's something that we've talked about ever since we started school," Brickell said. "We felt like we had a really good group of kids that all we needed to do was come together. I thought chemistry this summer, that was one of the things we needed to grow, and we've done a tremendous job of that."

Cutter Morning Star boasts an overall record of 12-5 on the season and is tied for first with Dierks at the top of the 2A-7. A run in the postseason could be a possibility for the Eagles.

"Just having them excited about the possibility of playing postseason basketball, that's what everybody strives to do," Brickell said. "With getting off to a really good start and sitting atop the conference standings, I feel like our kids are excited about what the next three or four weeks have in store leading up to postseason play."

While the Cutter Morning Star boys team has had a successful start to the season, the Lady Eagles have struggled and are off to a 1-4 start in conference play.

However, first-year head coach B.J. Rogers said he has seen a ton of improvement in his team since the first game of the season.

"We still struggle to score, but defensively we've improved," he said. "Early on we struggled to rebound the basketball. We've improved there. I feel really good. If we can find a way to score the ball a little bit better, I think we might be able to make a little noise in the district tournament."

The Lady Eagles have felt the effects of COVID-19 as well. Rogers said it is tough when his team plans for a game then a day before or the day of the game the team finds out it is not going to be played.

"It's hard to stay locked in mentally on what you're supposed to do," he said. "Here at Cutter we've gone to AMI days for a couple days, and we've had five days off in a row. You're in the middle of conference season, and there's five days that you don't get practice. You're going to be rusty. You're going to be a little bit out of shape, but it's tough because you're right in the meat of the conference schedule."

Rogers said that at the end of the junior high season he expects to move up some players that could really help the senior girls team.

The senior class on this year's Cutter Morning Star girls team has not been to the regional tournament, and the Lady Eagles set a goal of making it there for the senior class.

"We've seen pieces where if we can put four quarters together and play consistently, we feel like we can compete with a lot of the teams in our conference, even some of the better teams," Rogers said. "Just keeping them locked in and I think they really believe they can make the regional tournament."

Hot Springs was one of the first teams in the county to face a shutdown due to COVID-19 this season, having to cancel their first four conference games.

Lady Trojans head coach Josh Smith said that Friday was the first day since Jan. 4 that the team had been able to do any kind of basketball-specific practice.

"So we've been a week and a half with minimal to no practice," he said. "So it's kind of you know, just feels like you've kind of resetting, starting over almost a little bit, if that makes sense. So just trying to get back into flow, get kids back. Legs are gone right now because we hadn't been able to do anything. I had three girls able to stay in the gym and practice last week 'til Monday, and then we got a couple more back on Monday and Tuesday, and then just kind of worked ourselves back up to finally get the 10. Today was the first day we could do anything sport-specific, basketball specific, based off of what the return to play protocol is."

The Lady Trojans started out the season 4-6, and Smith said that having been unable to play since Dec. 30 will be tough, especially with the team jumping right in to conference play.

"During your Christmas tournament to try to keep yourself going and not just sit out for two weeks, and then we didn't play the game since the 30th and we're not going to play a game until the 18th," he explained. "So when it's all said and done, you're almost a three-week timeframe that we hadn't played a game. And so there's going to be some rust to knock off. And you're playing ... against a really good Lake Hamilton team that, you know, pretty sure three time back to back conference champions and looking looking to be a force to be reckoned with this year as well. And that's who you catch your first game out, and they've been able to play a game. You know, they'll have a week off before they play, but we're sitting on three weeks."

The Trojans (4-7) are facing a similar situation to the Lady Trojans, but head coach Antoni Lasker said that while he is concerned about his team's conditioning, he feels good going into Tuesday's game, despite the long layoff.

"We got back Monday, and kind of eased into the protocol. ... I think we were playing pretty good going into the tournament at Highland and made it to the championship game while we were there, and came up a little short," he said. "But I felt like we're getting back to where we need to get to. ... I think we're in a good spot right now, man. Just got a few more practices before we play Tuesday, so (I'm) trying to get them in as much game shape as possible, and then you know, we'll just take it one game, one practice at a time."

While the Trojans have had some adversity this season, Lasker said that he feels the quality opponents that his team has faced will only help them down the stretch.

"The teams we've lost to have all been 5, 6A teams, playoff contention teams, championship caliber teams," he said. "And so as always, you know me, man, I'm going to soup the schedule up. We're not going to run from nobody. We're going to play the best, and, you know, it helps to that gets us ready for conference.

"And you know, sometimes we may, you know, end up right at .500. Sometimes we may be a little bit better, but at the end of the day, you know, the goal for nonconference is to get ready for conference, and I don't think with all the teams we played, I don't think it won't be anything that we haven't seen. And I think we'll be well prepared and equipped for conference once our guys get their wind back and get back in game shape."

Print Headline: CMS, Hot Springs trying to get legs back