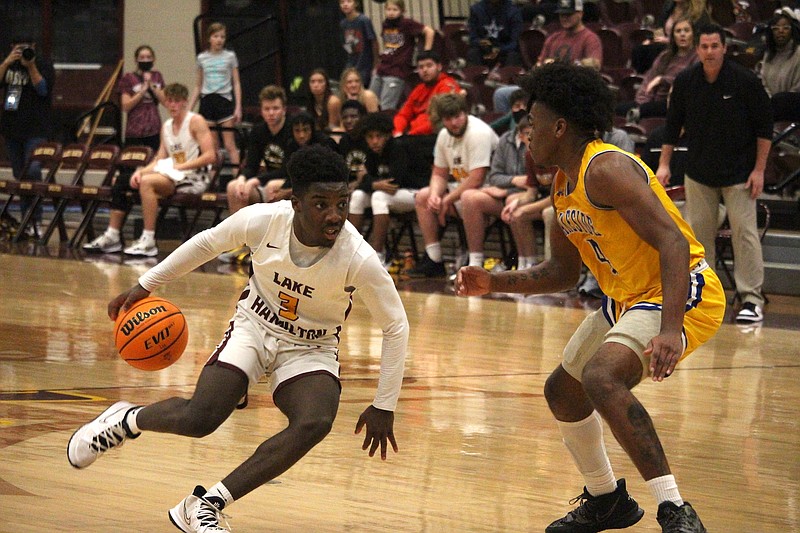 Of all eight schools in the 5A-South, Lake Hamilton and Lakeside are the only ones to have played more than two games. Both Lake Hamilton's boys and girls teams are 3-0 in conference play while Lakeside's teams are both 2-1.

As the teams prepare to makeup games over the next two weeks to reach the midpoint of conference play, the coaches from the two schools weighed in on their thoughts on where their teams are at this point.

Lakeside boys head coach Eddie Lamb said that his team's 73-51 win at Sheridan Tuesday saw the team shoot well from the perimeter, which is not something they have done much this season, despite an overall record of 10-4.

"We played a really good game (Tuesday) night, had a really good second half against Sheridan," he said. "I really like our ballclub. You know, I really like our -- defensively I think we're good. I certainly think, like last night we hit nine threes. It's like any club around the state, if you're shooting the ball, you've definitely got a better chance to win, but we shoot it pretty good offensively. Man, it really helps us, and I wouldn't consider us a team that shoots a lot of threes. But last night, we were 9 for 12, and that made the, that really helps. I mean, obviously any team's hitting on threes in the game really helps."

Lamb said that he is extremely proud of his team's defense.

"It's one of the better defensive clubs we've had since I've been here," he said. "We've got a couple lockdown guys we feel good about that can really lock guys down. And we hit the boards hard overall, and if we could just learn, you know, constantly take care of the basketball, you know, don't settle for the first shot, you know, settle for the better shot. ... I think our kids are buying into that."

The team is also very physical, which helps in a league with players that range from under six feet to over 6-6.

"We're physical, and overall, you know, we're an athletic bunch of kids," Lamb said. "I mean, you know, we're physical and, you know, when I talk to some coaches, they're like, 'Man, we'll keep you off the boards.' I mean, we do; we hit the board's pretty good overall, and I think our chemistry offensively is really good. I mean, if you look at our leading scorers, we have six guys basically averaging in almost double figures from 11 to 12 points to like 8.7. So, you know, six guys in that range from 9-12 points. You know, you don't always have that in ball clubs."

The Lady Rams (8-6, 2-1) took a 48-38 win over the Lady Yellowjackets Tuesday night, which head coach Jay Williams said was crucial for the team to bounce back after last week's loss to Lake Hamilton.

"We needed that win," he said. "We needed a bounce back win off of that game against Lake Hamilton. That was kind of brutal. It was good to go on the road and get a win."

While Williams feels his team is trending in the right direction, he is concerned about the "roller coaster ride" that teams across the state are experiencing with games getting canceled in the heart of the season.

"I feel like we're doing fine," he said. "The thing that hinders us most is the roller coaster ride that we've been on with the games being canceled and us not being able to get to a consistent groove. Just when we feel like we're there, there's a postponed game, there's a cancellation. So it's a bit of a roller coaster ride for us, and we're always having to climb back uphill as it pertains to endurance and just game time."

Williams said that he feels his team is becoming smarter in regard to winning games.

"I think in the past, or at least in the beginning (of the season), we solely were focused on, you know, who shoots it, or what type of shots are we getting," he said. "So on and so forth. But I think we've started to understand that there's way more components to the game of basketball. And we're focusing -- and I feel like we're putting most of our focus now -- on creating good shots, making an extra pass, and doing the things that, you know, some girls or some teams don't really want to do, and that's working hard on the defensive end, just doing the small things that count and the small things that add up to win ball games."

"I like where we're at," he said. "I like the growth that we've had the last few weeks. We talk all the time about the season being a marathon and not a sprint. We want to try to be improving and getting to be our best, playing our best basketball, in February and the first of March."

The Lady Wolves (14-2, 3-0) have a great mix of senior experience and underclassmen that has worked very well on the court so far this season. Seniors Ginny Higginbotham, Audri Winfrey, Hayleigh Wyrick and Natalie Tedder provide leadership and experience, and sophomores Brooklyn Braughton, Emma Hughes and Makenzee Clark all play important roles in the team.

"We have good senior leadership that just knows the things it takes to be successful and things it takes to be a good basketball team," Condley said. "They've always been this way. That's why we've had the success we've had over the last few years is because they get extra time in the gym. They're going to ask me, 'Hey coach, what time are you getting to the gym, so I can get there early to get some shots? Coach, can I stay after?'"

Since the summer, the Lady Wolves have talked about controlling what they can control and improving on the aspects of their game they need to before getting to crunch time in February.

If the team can stay healthy, the Lady Wolves could be primed for a run in the postseason. Higginbotham went down with an injury last year, and it was hard to replace her on the floor.

"You also need a little luck," Condley said. "You have to have good matchups when you get ready to go to the state tournament. That was something we dealt with last year when Ginny Higginbotham went down right before we went to the state tournament, and it just totally changed everybody's role and what everybody needed to do. That's just hard. ... You need everybody to stay healthy, and that's just one of those things -- you need a little bit of luck on your side. Hopefully we keep improving, and we stay healthy."

The Wolves (13-3, 3-0) have picked up wins against Sheridan, Lakeside and Hot Springs. Head coach Scotty Pennington said that his team is off to a good start with three league wins against teams he thinks are in the hunt for state tournament berths.

The Wolves averaged right around 59 points in their three 5A-South wins compared to just under 79 points that Lake Hamilton averaged in its first four wins of the season.

"It's kind of funny; we started our season really offensive minded, scoring the ball at a real high rate," Pennington said. "Now as the season goes on and we get into conference and everybody has a lot of film on each other, our scoring averages are down. ... Our defense has come around, and we've been more defensive minded. We're proud of that."

The Wolves held all three of their conference opponents to under 50 points, and Lake Hamilton has not allowed a team to score over 50 points since the Wolves' 57-54 loss at Nettleton before Christmas.

"We feel like defense travels well," Pennington said. "There's going to be nights you're not going to shoot the ball well on the road and maybe even at home. But if you play defense and you guard, you're always going to have a chance to win. We've done that so far, so we're really pleased with where we are right now."

Lake Hamilton has its goals set high for the postseason. The Wolves made it to the quarterfinals last year before falling to Parkview 75-65.

"They talked about it ever since last year," Pennington said. "We knew we would have basically everybody coming back. We kind of said in the locker room, 'It's state championship run or bust next year.' So we set expectations really high and we worked toward that goal being where we need to be to make that happen. I don't feel by any stretch that we've peaked this season. I don't think we're playing near at the level that we're capable of yet, but we're still being able to win games."