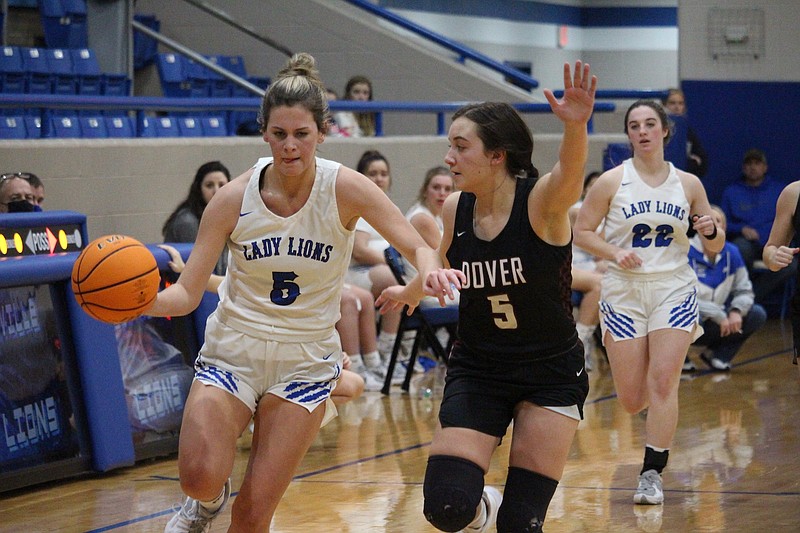 Reams also finished the night with nine rebounds, and Logan Young led the Lady Pirates with 17 points and a game-high 17 boards.

"We talked about it at the end of the first quarter, second quarter, halftime -- it's just offensive rebounds and turnovers," Jessieville head coach Magen Scrivner said. "We allowed way too many offensive rebounds for putbacks. We just turned the ball over way too much."

"Well, I just felt like we're young," Dover head coach Charlie Melton said. "We start a ninth grader and two sophomores. I had my only senior out, so I had another sophomore in there. I think the nerves got to them, but they settled in a little bit and calmed down and just took care of the ball. They went to our strength, getting the ball inside. Our post handled it and finished around the rim."

Dover started to implement a full-court press, and the Lady Lions struggled to move the ball up the floor under pressure.

"It affected us just because we didn't take care of the basketball," Scrivner said. "I don't think it's anything we shouldn't have been able to handle. It's just we turned it over entirely too much. A lot of our turnovers led to points for them. I'll be anxious to see how many points we gave off offensive rebounds and steals."

Dover extended its lead in the third quarter, and the Jessieville turnovers continued. After a Lady Lion giveaway right after intermission, Whitley Singleton drove the length of the court and got fouled before knocking down a free throw.

"Our pressure on the ball created some turnovers and created some offense for us," Melton said. "We're very aggressive. With our youth factor, they want to press. They want to get after it, put that pressure and force you to have to think under fire. They do a good job with it."

With 6:33 remaining to play in the third quarter, the Lady Lions kept the game close when Kallie Castleberry drained a 3-pointer to trim Dover's edge to 33-28.

The Lady Pirates got the momentum back on their side when Logan Young scored a physical basket in the paint while drawing the foul. Young made the and-one for a 38-30 lead.

Dover then forced another turnover, and Reams scored in transition off the takeaway to extend the Lady Pirates' edge to 10 points.

Reams added another basket in the paint after a nice passing move from the Lady Pirates to send Dover into the game's final eight minutes leading 42-31.

Jessieville started the fourth quarter by forcing a turnover as Adriana Pricop scored on the takeaway to bring the Lady Lions within nine points.

However, Reams answered by posting up her defender in the paint, spinning and then scoring to put Dover back up by 11 points with 7:00 left on the clock. Reams continued her outstanding night with a block on the defensive end of the floor before receiving a pass in transition and finishing at the rim for a 46-35 buffer.

Pricop gave the Lady Lions some life by draining a 3-pointer to cut the deficit to eight, but Jessieville found it hard to get stops on defense.

Young responded with a basket in the paint before Singleton hit a long range 3-pointer to give the Lady Pirates a 51-39 lead.

Jessieville brought the game within eight points after a hard-fought layup from Castleberry with 59.7 seconds left on the clock, but the Lady Pirates were able to close out the game at the free throw line.

Although Scrivner did not use it as an excuse, the Lady Lions have dealt with the effects of COVID-19 over the past couple of weeks.

"Dover's a good team," Scrivner said. "We came off being off five days and and had to show up and play today. But you know, so is everyone else. They're having to do it, too. Everyone else in our league, everyone across the state is having to do it. We can't use those things as excuses. We have to come in here and be ready to battle and go every night in this league because this is a tough league we're in."

Print Headline: Reams, Dover battle back to down J'ville