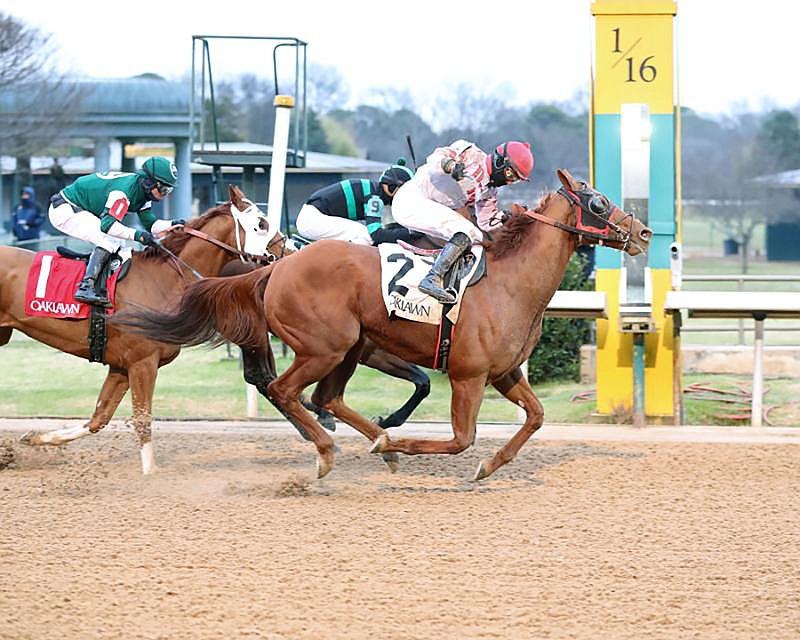 Because of extreme cold temperatures, Oaklawn has canceled training and racing for today.

The announcement came early Thursday afternoon amid sunny skies but with temperatures in the mid-30s. With an overnight low of 17 forecast in Hot Springs, today calls for clear skies with a high of 35 and rising to 46 Saturday, when nine races are scheduled with post time moved back 30 minutes to 1 p.m.

In its earliest opening, Oaklawn had raced consecutive 18 days since Dec. 3. The 66-day season runs through Sunday, May 8 with Friday-Sunday cards and Presidents Day (Monday, Feb. 21) and no racing Easter Sunday (April 17).

Oaklawn closed eight racing days (Feb. 12-21) last year because of a winter storm. The track had no weather-related cancellations in 2019 and 2020, though because of the Covid-19 pandemic no fans were allowed from March 13-May 2, 2020.

Oaklawn's Saturday feature is the $150,000 American Beauty with nine older filly and mares going six furlongs. The track will be open today for casino wagering and simulcast wagering.

-- Bob Wisener, Special to The Sentinel-Record

The competition is open to all boys and girls ages 9-14 and will be held in the gymnasium at St. John's Catholic School, 583 West Grand Ave. Participants will be competing in their own age and gender divisions, and winners will advance to the district competition in February.

The top competitors from the district competition will advance to the state contest, and international champions will be announced based on scores at the state competitions.

SHERIDAN -- Taevon Johnson and Braylon Russell combined for 44 of Lakeside's points in a 73-51 win over Sheridan on the road Tuesday.

The Lady Zebras took an 8-4 lead in the first before Hot Springs responded with a 16-8 second quarter to take a 20-16 lead into the break. Pine Bluff outscored the Lady Trojans 21-9 in the third and held them off in the final eight minutes to secure the win.

Luke Lumsden led the junior Rams with 11 points, and Ty Braziel and Sloan Hayes each scored seven points. Sam Trusty tallied four points, and River Cook and Ben Vincent rounded out the scoring for Lakeside with three points each.

NIGHTHAWKS FALL ON THE ROAD

In the men's game, JoQuarius Valrie became the Nighthawks' all-time rebounds leader, and the Greyhounds took a 37-34 lead into the break.

National Park held a chance for a buzzer-beater while trailing by two points in the closing seconds of the game, but the Nighthawks' shot fell short.

The Nighthawk women held ASU Mid-South to just two points midway through the first quarter, however the Greyhounds responded with an 11-0 run and took a 25-17 lead into intermission

With three minutes remaining in the game, the Nighthawks brought the game within 48-45. However, the Greyhounds closed out the game at the free throw line.

The Muleriders shared the 2021 regular season conference title with Arkansas Tech, and both schools, along with Henderson State, made the NCAA Tournament last season.

SAU will return four All-GAC players from 2021, including First-Team selections Jacob Womack and Austin Baker. Womack ranked in the top five in wins, ERA, strikeouts and innings pitched, and Baker led the league with a .518 on-base percentage and finished second in stolen bases and runs scored.

Arkansas-Monticello earned a fourth place finish in the poll, and the team brings back its top two starting pitchers this season. River Hunt ended last season with a 9-0 record and a 3.52 ERA, and Mason Philley finished with a league second-best 90 strikeouts last season.

Harding was voted eighth. The Bisons lost GAC Pitcher of the Year Ryder Yakel and Newcomer of the Year Michael Chrisman to graduation.

RUSSELLVILLE -- SAU picked up seven first-place votes in the 2022 GAC softball preseason coaches' poll to enter this season as the conference favorite.

The Muleriders finished the 2021 season by claiming their third straight regular-season title, and earned their fifth consecutive bid to the NCAA Championships. SAU lost five All-GAC selections, but return Alese Capser, a First-Team outfielder who hit .394, Sarah Evans who slugged .549 and Jaxynn Dyson, who hit .354.

Arkansas Tech finished second in the poll with three first-place votes. The Golden Suns won their third-straight GAC Championship in 2021 and reached the NCAA Championships for the fifth time since 2015.

SEOSU finished third in the poll, and Harding took fourth. The Lady Bisons will be under first-year coach Ashley Reeves, and Reeves will inherit two 2021 First-Team selections in pitcher Lily Tanski and shortstop Hanna Jones.

Southern Nazarene finished fifth in the poll, and Oklahoma Baptist came in sixth.

UAM came in eighth, and East Central followed in ninth. Bailey Camp led the Blossoms with a .354 average and .432 on-base percentage last season.

HSU, SWOSU and NWOSU rounded out the voting.