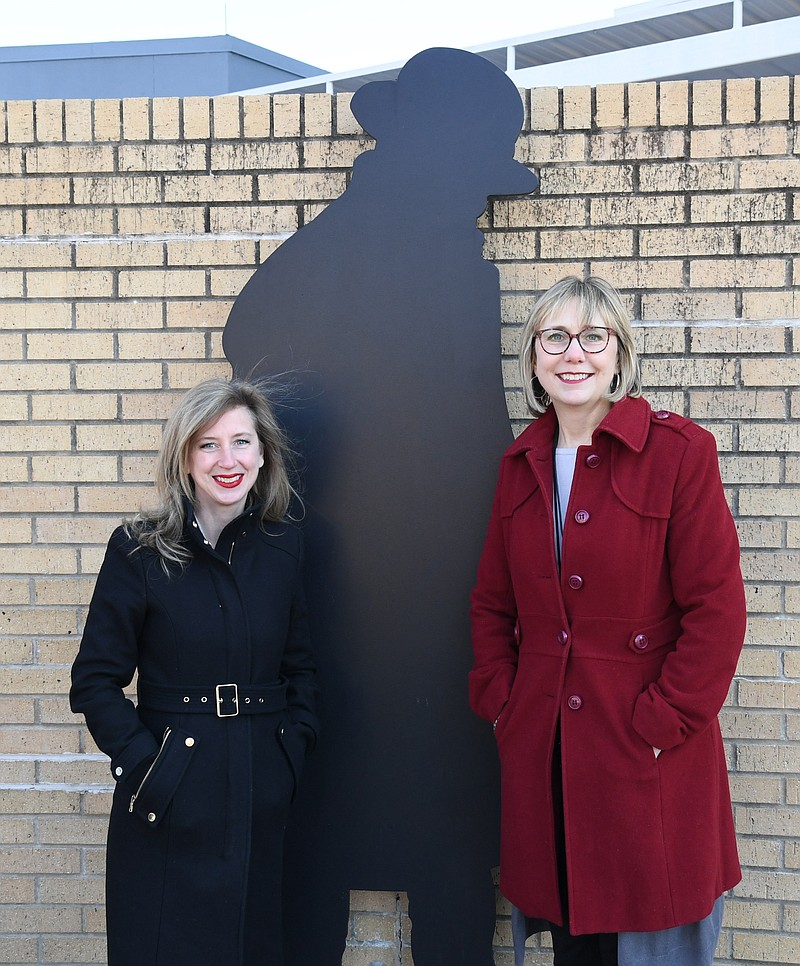 Michelle Roberts, committee chair for the Arkansas Cherry Blossom Festival, left, and Mary Zunick, executive director of the Hot Springs Sister City Foundation, stand in front of the monument of Kenji Miyazawa at the Hot Springs Convention Center, which will host the festival for the second year in a row. - Photo by Tanner Newton of The Sentinel-Record

The Arkansas Cherry Blossom Festival will return to the Hot Springs Convention Center again this spring to allow for social distancing.

Hosted by the Hot Springs Sister City Foundation, the fifth annual free festival will take place from 1 to 5 p.m. on Sunday, April 3.

"The festival will delight the audience with the sights, sounds and atmosphere of a Japanese traditional festival. There will be children's festival games, as well as face painting and a children's corner complete with the retelling of Japanese folk tales and legends," Michelle Roberts, the festival's committee chair, said.

"Inside, we'll have a kimono garden -- an even larger exhibit than last year -- as well as workshops to make your own Zen garden, bonsai. We'll have a haiku contest, and there will be an adult and children's division with prize money to be awarded," she said.

Mary Zunick, executive director of the Sister City Foundation, said the winners of the haiku contests will be featured at the festival, which will see the opening of the "Sister City art exhibit, which is part of Sister City International."

The exhibit will "feature local students' artwork as well as artwork from our sister city, Hanamaki," Zunick said.

The first three years the festival was held at St. Luke's Episcopal Church, but due to COVID-19 concerns, the festival relocated last year to the convention center's exhibit halls to allow for more social distancing.

Roberts said the change in location is due to how well the 2021 festival went.

"In the beginning years of the festival, it was a small gala-type event, with about 150 people, and due to COVID, we had to re-imagine the event," Roberts said, noting they planned last year's event for around 400 attendees.

"So this year the expectation is that it will be even larger, and have even more to do and see and experience, so we really needed to expand that space. So one, we can accommodate all the exhibits and booths and experiences, but also remain socially distanced," Roberts said.

Assisting will be students from several colleges and high schools, including volunteers from "the University of Arkansas at Fayetteville, UCA, Arkansas Tech, Hendrix, as well as students and staff from (Arkansas School for the Mathematics, Sciences and the Arts) and we are still gathering volunteers and partners from all over the state," Roberts said.

"An event like this takes a tremendous amount of teamwork, so we are always looking for more volunteers," Zunick said.

The festival is a fundraiser for the Sister City Program and will include an online auction this year, and they have a number of sponsorships helping as well, Zunick said.

"The money raised from the silent auction or any sponsorships, it goes to support the programming of the Hot Springs Sister City Foundation, and one of the large parts of that, of course, is exchange. Educational exchange, specifically student exchange," she said.

"We want that to be open to everyone, not just people who have the ability to pay for the trip themselves," Zunick said.