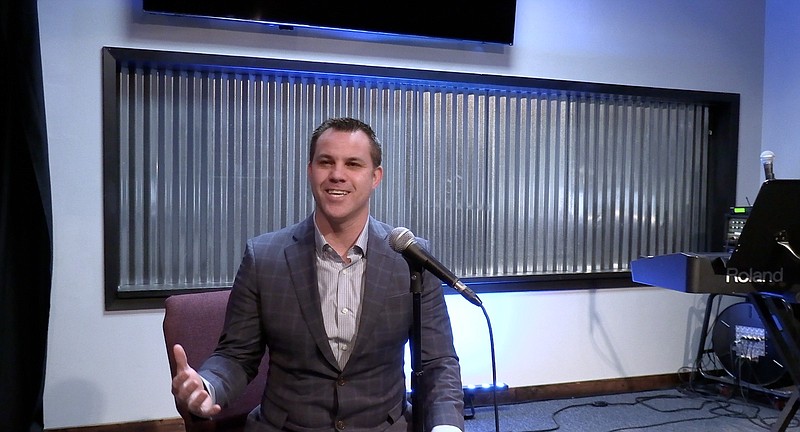 South Central Arkansas Fellowship of Christian Athletes Multi-Area Director Micah May explains the impact that Courts of Faith has on students. - Photo by Donald Cross of The Sentinel-Record

Returning for the second time after a break in 2021, South Central Arkansas Fellowship of Christian Athletes is hosting Courts of Faith at Lake Hamilton's Wolf Arena Feb. 16.

"Courts of Faith is an outreach event," SCAFCA Multi-Area Director Micah May said. "For the past 15 years we've had thousands of students come to (Chick Austin Field) in October for Fields of Faith. We thought, 'Wouldn't it be cool to do something like that in the spring?'"

When May went into Wolf Arena for the first time and saw how big it was, he compared it to a Division II college basketball arena.

"Really just God inspired me," May said. "I walked in one day, and I looked around and just the sheer size of it. Our first event we had 1,500. You don't know if you're going to have 200 or a thousand or whatever."

FCA hosted Courts of Faith at Wolf Arena for the first time in 2020 before the full onset of COVID-19. The organization had to put a hold on the event in 2021 due to the coronavirus, but it is set to return at a much needed time.

"It's been tough on all of us," May said. "A lot of students have struggled through COVID and everything. ... We're really excited to bring it back because there's a lot of students that want to hear from their fellow peers."

However, Courts of Faith centers around fewer student speakers and puts an emphasis on a guest speaker.

During Courts of Faith, around three to four student speakers share their testimonies about what they have overcome and their faith. Former Arkansas State University defensive back Justin Clifton will also speak at the event this year as a keynote speaker.

"He's got a powerful story," May said. "I'm looking forward to hearing him."

Students from sixth grade through recently graduated students can attend the event. May said one of the biggest benefits of Courts of Faith is the encouragement that students receive from their peers.

"It's been a tough couple years for a lot of students and to be able to have like so many people together, students, hearing their students share kind of what are some of things they've overcome," he said. "Then to hear somebody that's not much older than them to share their story and how God has helped them to overcome adversity."

Looking beyond Courts of Faith and at FCA as a whole, May emphasized the role of students in the organization.

While the staff and adults at FCA try to encourage involvement in the organization, it is up to the students to really get involved.

"Ultimately it's a place where students can live out their faith no matter what church they go to, no matter what denomination," May said. "A place on campus where they can meet, pray, read their Bible, Bible study and be encouraged on a weekly basis."

May said athletics and faith go together because in athletics, athletes are striving to be the best of what God has them to be while competing. However, a student does not have to be an athlete to participate in FCA.

"We just realized that a lot of the athletes are center stage," May said. "Whenever they start living out their faith, many times others will follow. There's a lot of similarities. There's so much research out there on just sports alone and how many lives it has touched throughout the years. You think about taking what they have learned from their coaches and putting the gospel with that, the faith aspect of it, it's really just a powerful combination."

The pandemic affected FCA branches across the country differently, and May said the South Central Arkansas branch had a lot of students come together to keep FCA thriving during the pandemic.

"We had a lot students say, 'Hey, just because there's a lot of craziness out there, we still need to share the gospel,'" May said. "The students stepped up. That's ultimately our goal for them to have a place to be engaged, equipped and empowered to lead. It actually helped us in that front."

Looking back, May did not really know what to expect at the first Courts of Faith, but it proved to be a success.

"We felt like it was a huge success," he said. "Just really a lot of people in the local community saying, 'Hey we care about the future. The future is our students. What can we do to partner with organizations like FCA to help encourage them to be the best version God has called them to be?'"

May said the student reaction after the first Courts of Faith was very positive. Around 250 students at the first event said they wanted to go pray with somebody.

Volunteers at the event are trained to talk to students about the gospel and just life in general. May also heard feedback from coaches who brought their FCA groups to the first Courts of Faith.

"There was this one story about how someone who didn't go down to the front and they didn't go to the back and get a Bible and get prayed with, but on the ride home a student was talking, and it created a conversation," May said. "That person led the other student to the Lord right then and there for a faith decision. We can't truly measure the ripple effect of it all."

May said FCA gives students the opportunity to speak and share what is going on in their life.

"That's what makes it special," he said. "That's what I love about Courts of Faith. It lets students share their testimony."