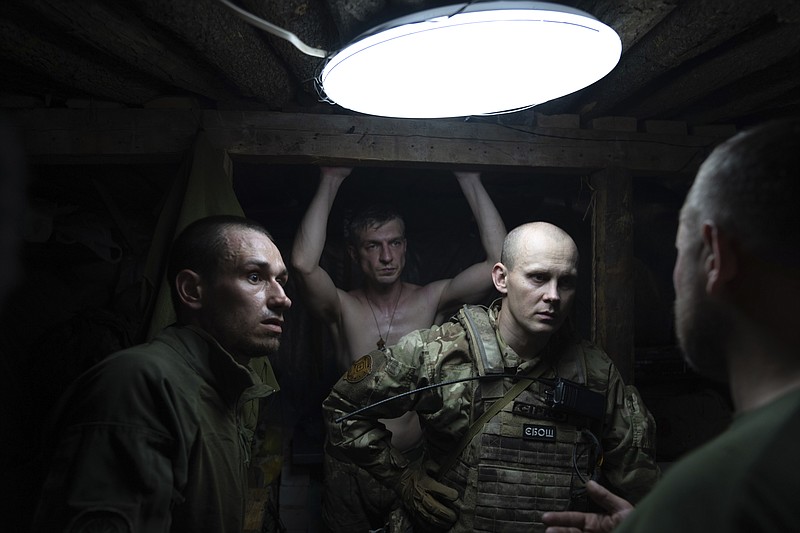 Ukrainian servicemen speak in the shelter at their position at the frontline near Kharkiv, Ukraine, on Saturday, July 2, 2022. (AP Photo/Evgeniy Maloletka)

KYIV, Ukraine -- Russian forces pounded the city of Lysychansk and its surroundings in an all-out attempt to seize the last stronghold of resistance in eastern Ukraine's Luhansk province, the governor said Saturday. A presidential adviser said its fate would be decided within the next two days.

Ukrainian fighters have spent weeks trying to defend the city and to keep it from falling to Russia, as neighboring Sievierodonetsk did a week ago.

"Over the last day, the occupiers opened fire from all available kinds of weapons," Luhansk Gov. Serhiy Haidai said Saturday on the Telegram messaging app.

A river separates Lysychansk from Sievierodonetsk, and Oleksiy Arestovych, an adviser to the Ukrainian president, said during an online interview late Saturday that Russian forces had managed for the first time to cross the river from the north, creating a "threatening" situation. He said they had not reached the center of the city, but control over Lysychansk would be decided by Monday.

Volodymyr Nazarenko, the second in command of the Svoboda battalion who was part of the June 24 retreat from Sievierodonetsk, said the Russians had "methodically leveled" the city. He described how Russian tanks targeted one building after another, moving on after each one was destroyed.

"So they use these tactics where barrages of ammunition are used to destroy the city and turn it into a burnt-down desert," Nazarenko said from the relative safety of Bakhmut, a city to the southwest.

Luhansk and neighboring Donetsk are the two provinces that make up the Donbas, where Russia has focused its offensive since pulling back from northern Ukraine and the capital, Kyiv, in the spring.

Pro-Russia separatists have held portions of both eastern provinces since 2014, and Moscow recognizes all of Luhansk and Donetsk as sovereign republics. Syria's government said Wednesday that it would also recognize the "independence and sovereignty" of the two areas and work to establish diplomatic relations with the separatists.

The leader of neighboring Belarus, a Russian ally, claimed Saturday that Ukraine fired missiles at military targets on Belarusian territory several days ago but all were intercepted by the air defense system. President Alexander Lukashenko described it as a provocation and noted that no Belarusian soldiers are fighting in Ukraine. There was no immediate response from the Ukrainian military.

Belarus hosts Russian military units and was used as a staging ground for Russia's invasion. Last week, just hours before Lukashenko was to meet with Russian President Vladimir Putin, Russian long-range bombers fired missiles on Ukraine from Belarusian airspace for the first time.

Lukashenko has so far resisted efforts to draw his army into the war. But during their meeting, Putin announced that Russia planned to supply Belarus with the Iskander-M missile system and reminded Lukashenko of how dependent his government is on economic support from Russia.

Lukashenko on Saturday also claimed that two Belarusian truck drivers were killed in Ukraine. Ukraine said the truckers were at a gas station when it was hit by a Russian airstrike in March, but Lukashenko claimed the organs were cut out of their bodies to hide evidence that they were shot.

Elsewhere in Ukraine, investigators combed through the wreckage from a Russian airstrike early Friday on residential areas near the Ukrainian port of Odesa that killed 21 people.

Ukrainian Prosecutor-General Iryna Venediktova said the investigators were recovering fragments from missiles that struck an apartment building in the small coastal town of Serhiivka. They also were taking measurements to determine the trajectory of the weapons and "the specific people guilty of this terrible war crime," she said.

Larissa Andruchenko said she was in the kitchen making tea at about 1 a.m. when a blast blew the doors open. At first she thought the propane gas tank had exploded, and called her husband to the kitchen.

"And right then the lights went off and it was nightmare. The two of us are in the kitchen with glass flying, everything was flying," she said.

'I emphasize: This is deliberate direct Russian terror, and not some mistake or an accidental missile strike," Zelenskyy said.

The British Defense Ministry said Saturday that air-launched anti-ship missiles generally don't have precision accuracy against ground targets. It said Russia likely was using such missiles because of a shortage of more accurate weapons.

The Kremlin has repeatedly claimed that the Russian military is targeting fuel storage sites and military facilities, not residential areas, although missiles also recently hit an apartment building in Kyiv and a shopping mall in the central city of Kremenchuk.

On Saturday, Kremenchuk Mayor Vitaliy Maletskyy said the death toll in the mall attack had risen to 21 and one person was still missing.

Ukrainian authorities interpreted the missile attack in Odesa as payback for the withdrawal of Russian troops from a nearby Black Sea island with both symbolic and strategic significance in the war that started with Russia's Feb. 24 invasion of Ukraine.

Moscow portrayed their departure from Snake Island as a "goodwill gesture" to help unblock exports of grain.

In other developments, the director of a charity helping the family of a British man captured in eastern Ukraine said Dylan Healy was detained on April 25 at a Russian checkpoint in the south of the Zaporizhzhia region. Dominik Byrne, director of operations at Presidium Network, told The Associated Press that Healy is an aid worker and has no connection either to the Ukrainian or the British military.

Healy is among at least five foreigners, including four Britons, being held by separatists, who accuse them of being mercenaries fighting for Ukraine. Three have been sentenced to death. The charges against Healy were announced Friday. 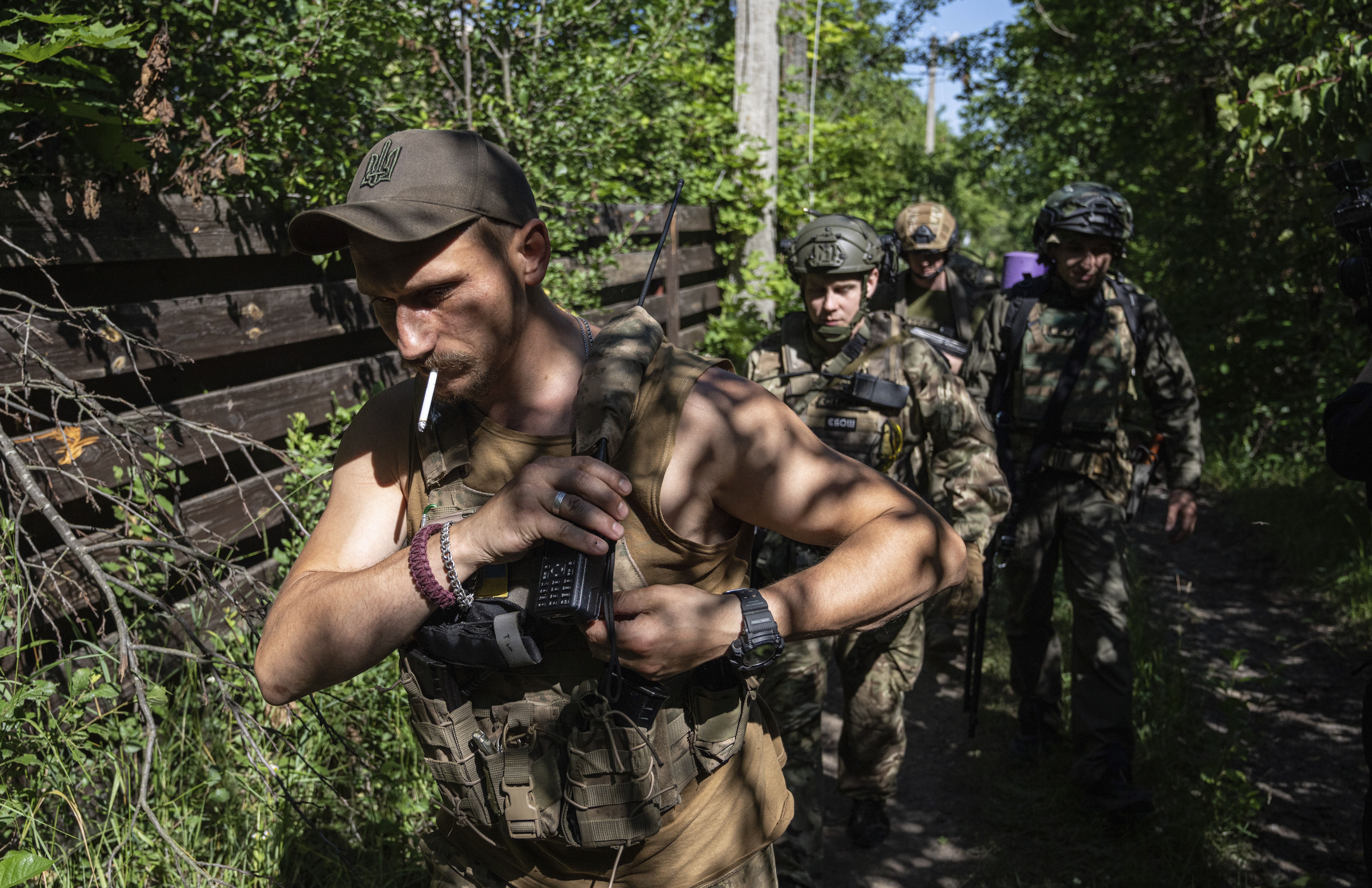 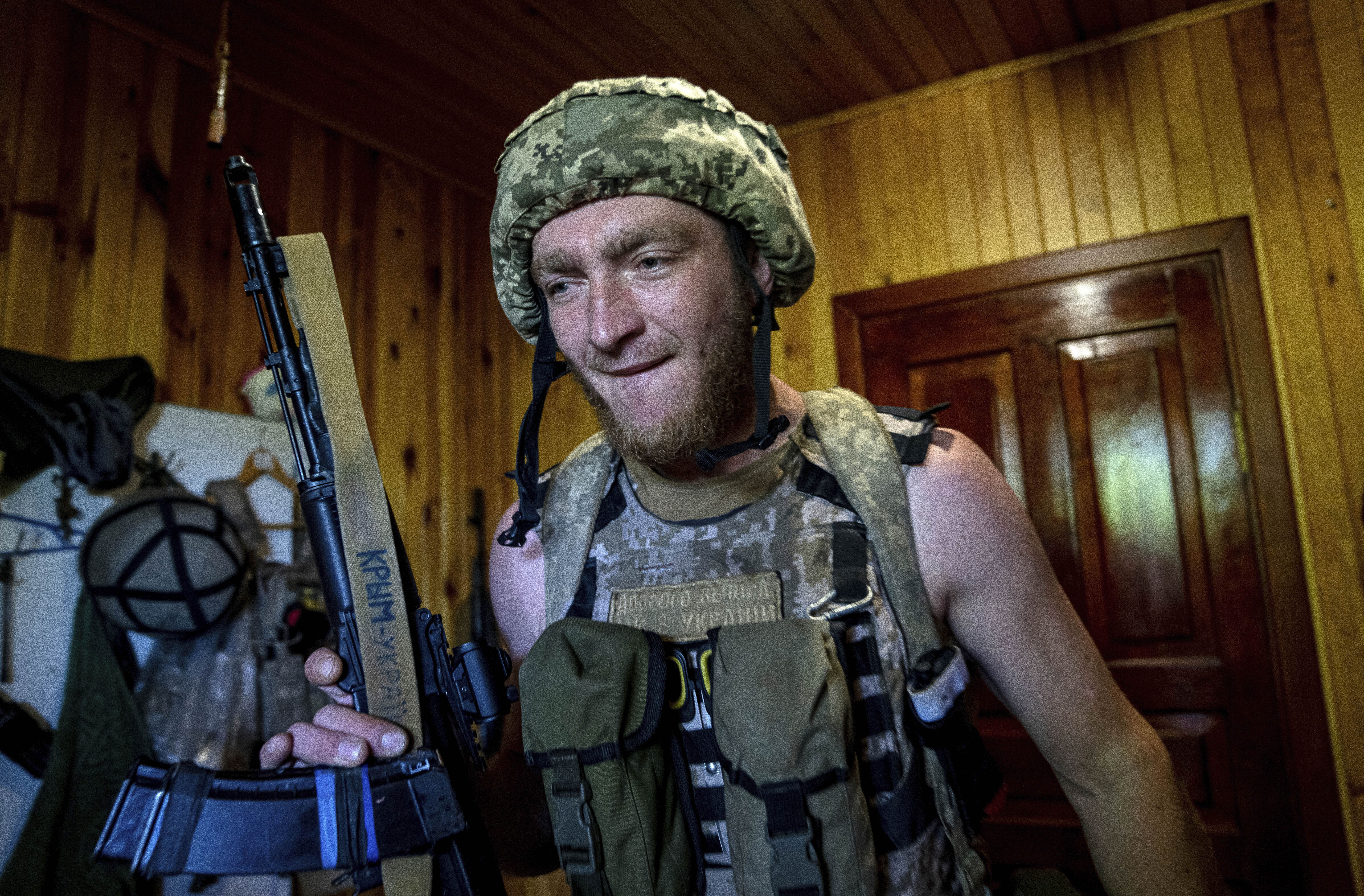 A Ukrainian serviceman prepares to go on duty to his position at the frontline near Kharkiv, Ukraine, on Saturday, July 2, 2022. (AP Photo/Evgeniy Maloletka) 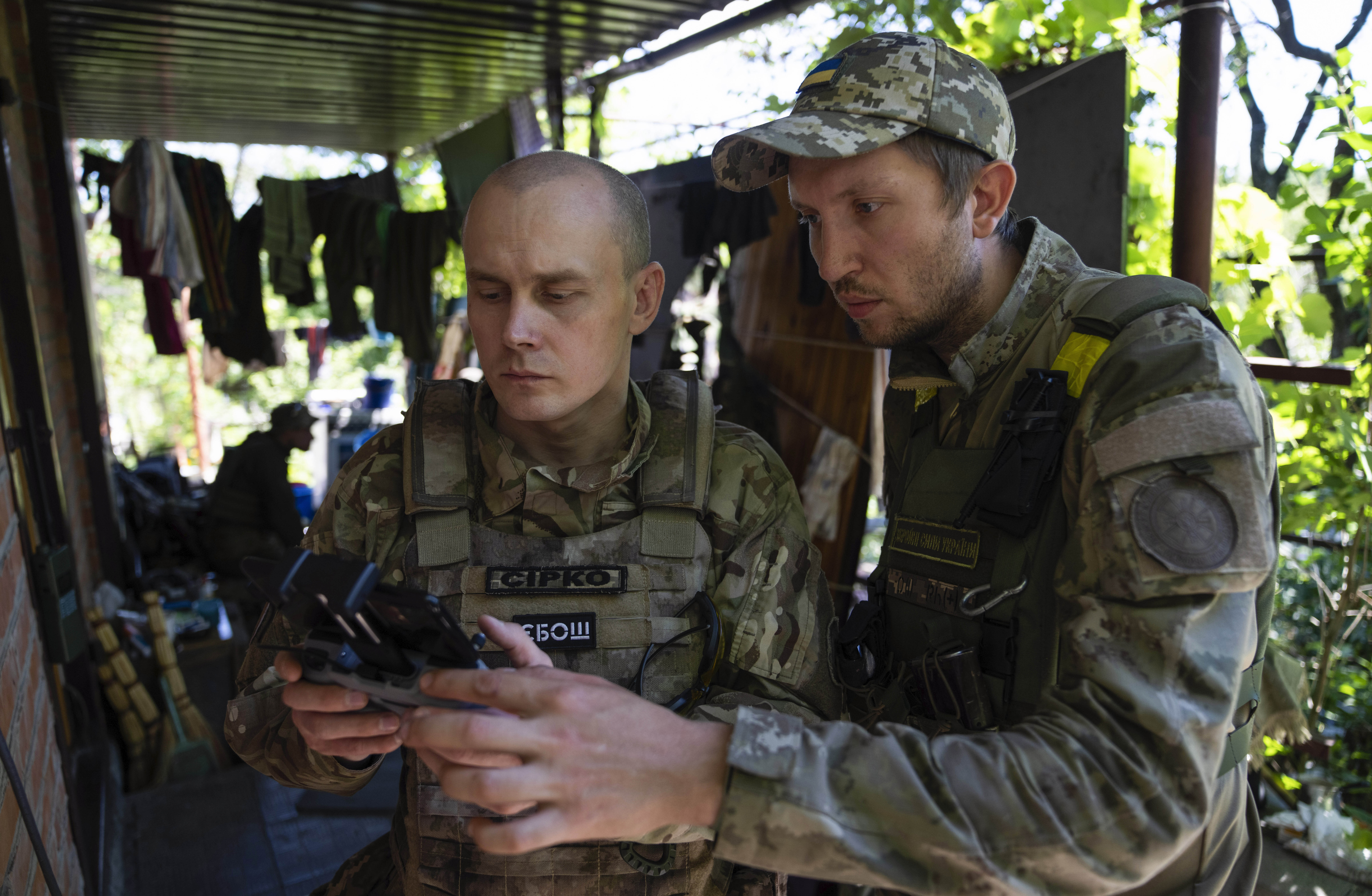 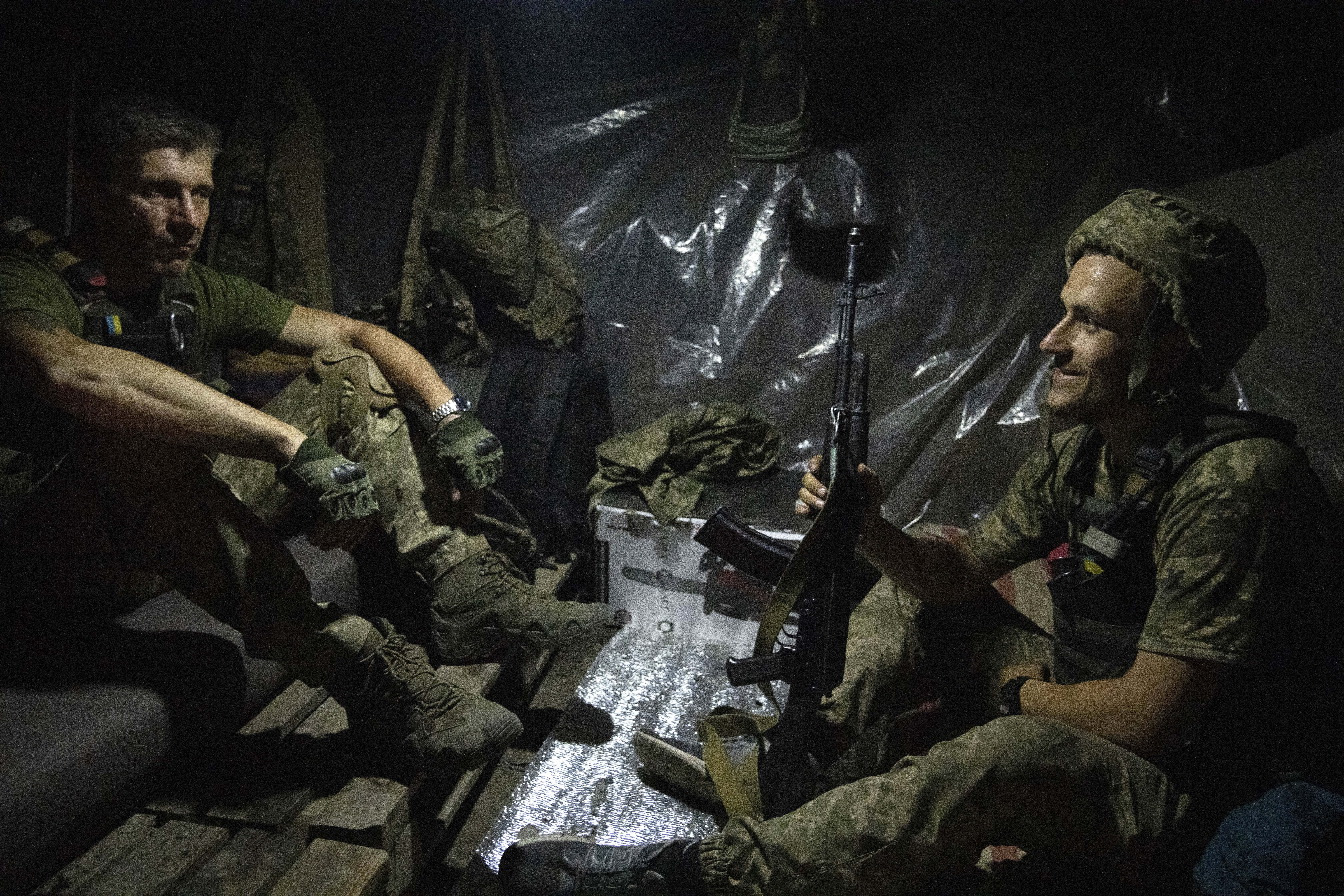 Ukrainian servicemen take cover in a shelter at their position at the frontline near Kharkiv, Ukraine, on Saturday, July 2, 2022. (AP Photo/Evgeniy Maloletka) 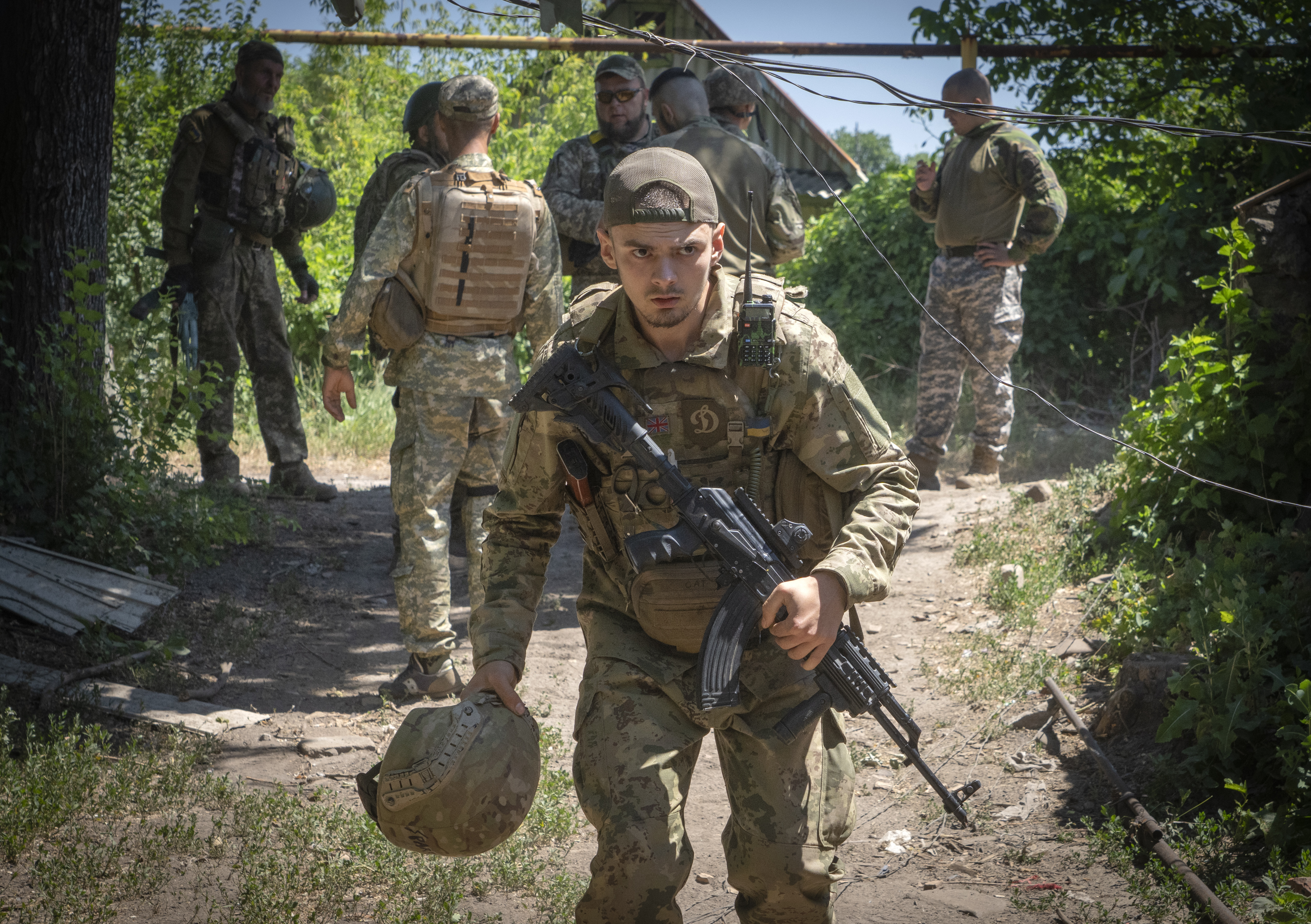 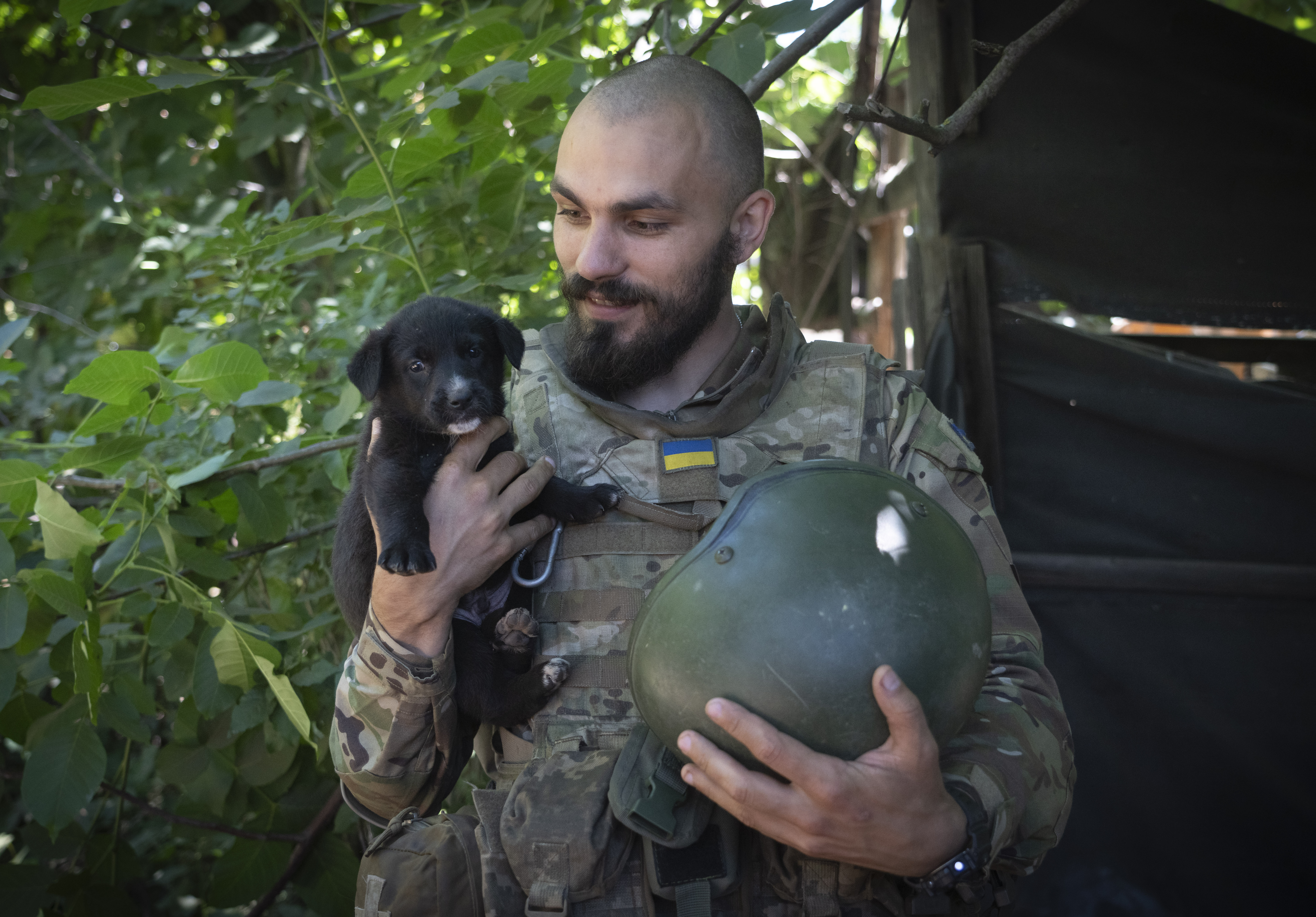 A Ukrainian soldier smiles as he looks at his puppy, in the Donetsk region, Ukraine, Saturday, July 2, 2022. (AP Photo/Efrem Lukatsky) 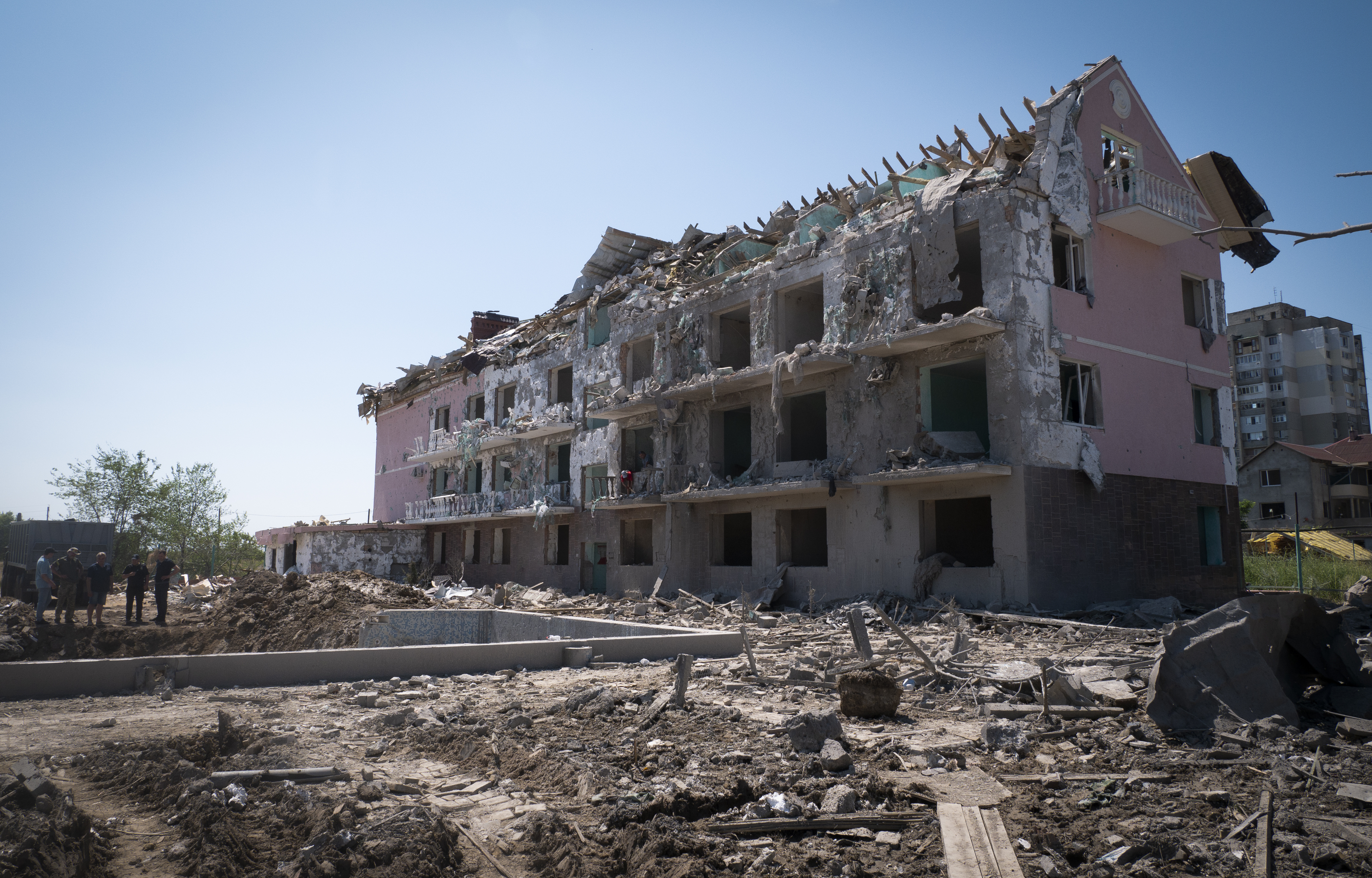 Local officials stand in front of a damaged residential building in the town of Serhiivka, located about 50 kilometers (31 miles) southwest of Odesa, Ukraine, Saturday, July 2, 2022. A Russian airstrike on residential areas killed at least 21 people early Friday near the Ukrainian port of Odesa, authorities reported, a day after the withdrawal of Moscow's forces from an island in the Black Sea had seemed to ease the threat to the city. (AP Photo/Maxim Penko) 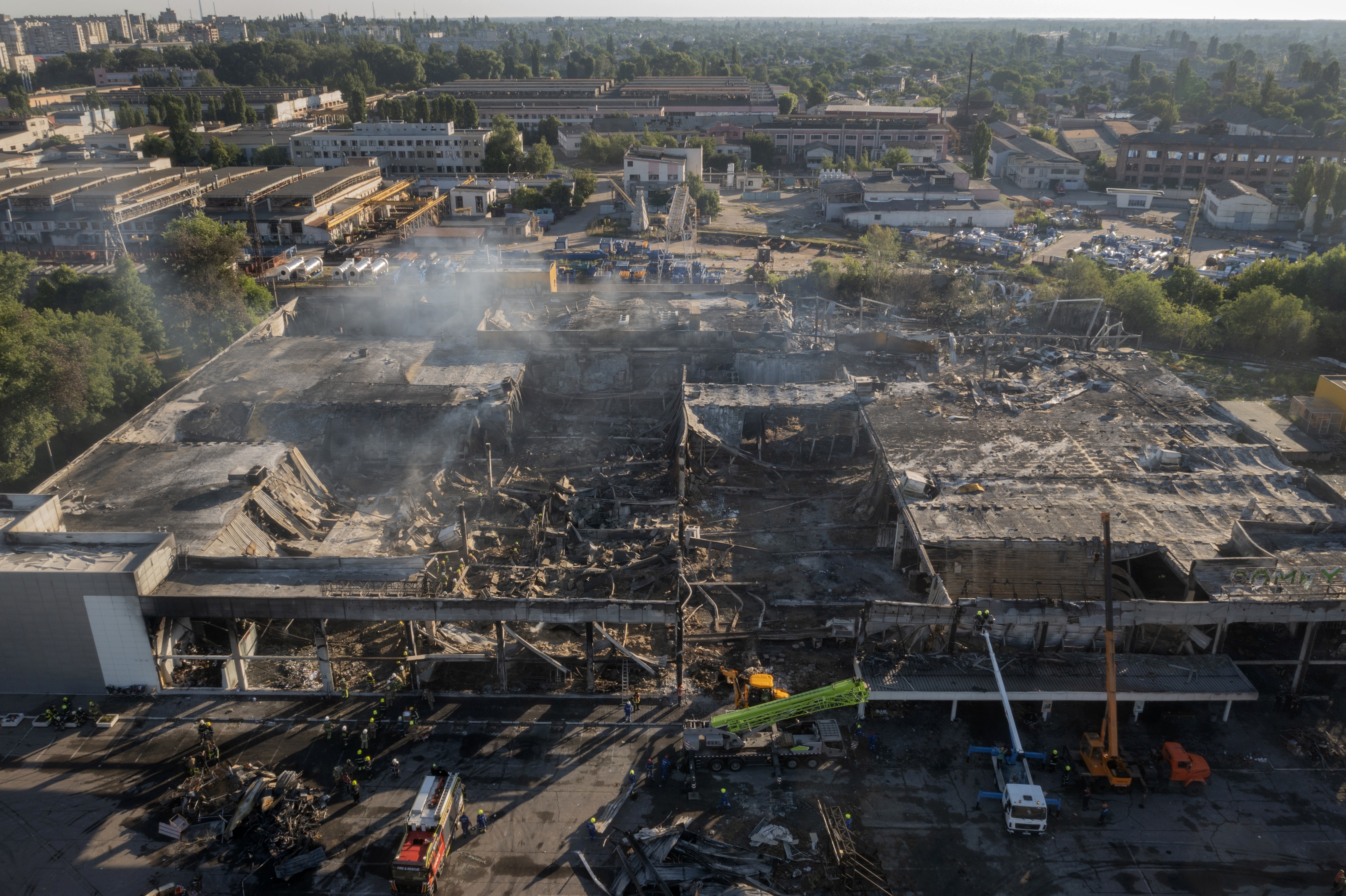 FILE - Ukrainian State Emergency Service firefighters work to take away debris at a shopping center burned after a rocket attack in Kremenchuk, Ukraine, Tuesday, June 28, 2022. While much of the attritional war in Ukraine’s east is hidden from sight, the brutality of Russian missile strikes in recent days on the mall in the central city of Kremenchuk and on residential buildings in the capital, Kyiv, were in full view to the world and especially to Western leaders gathered for a trio of summits in Europe. (AP Photo/Efrem Lukatsky, File) 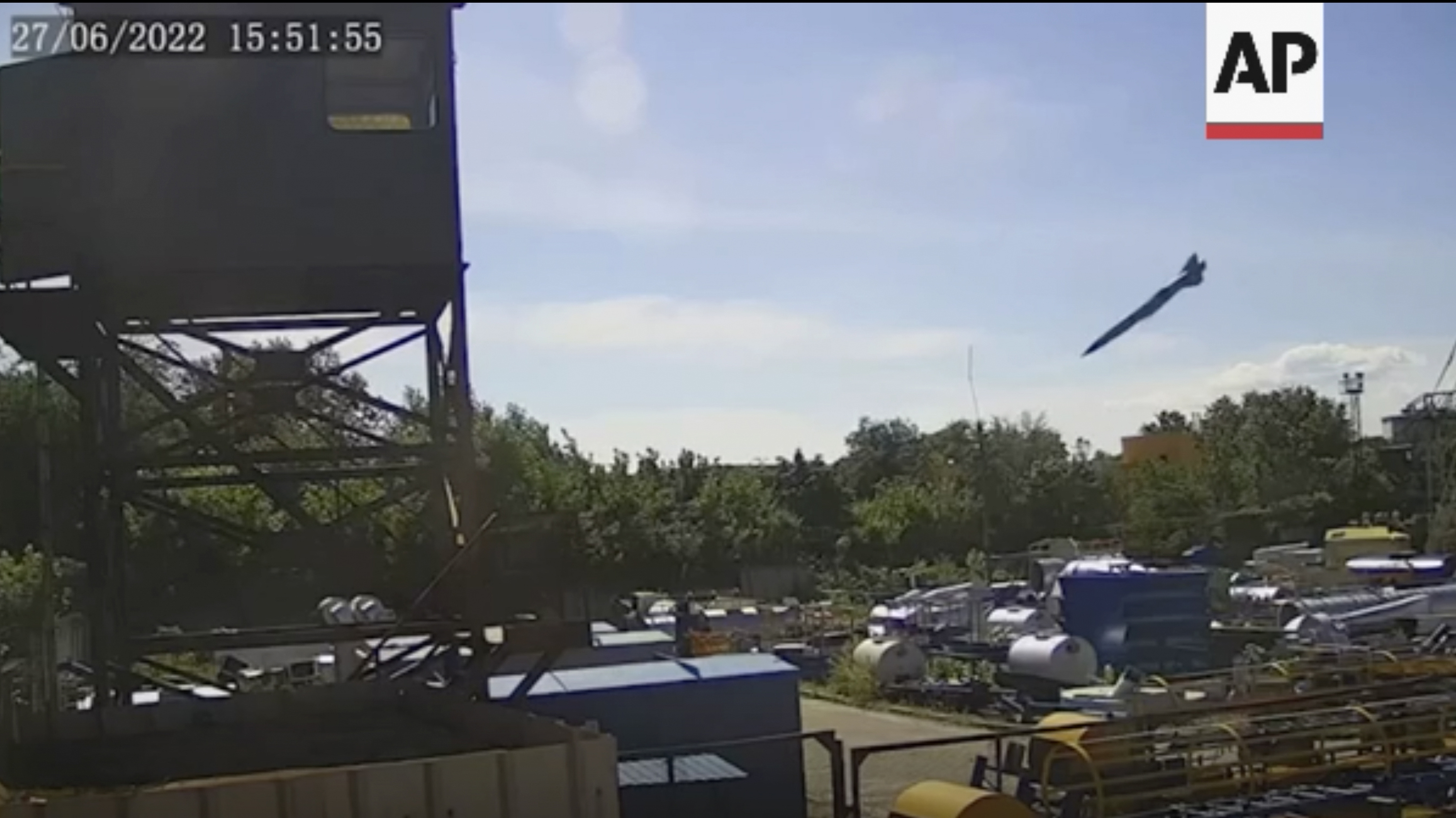 FILE - In this image taken from video and provided by the Ukrainian Presidential Press Office on Tuesday, June 28, 2022, claims to show the moment a missile struck the shopping mall in Kremenchuk. While much of the attritional war in Ukraine’s east is hidden from sight, the brutality of Russian missile strikes in recent days on the mall in the central city of Kremenchuk and on residential buildings in the capital, Kyiv, were in full view to the world and especially to Western leaders gathered for a trio of summits in Europe. (Ukrainian Presidential Press Office via AP, File)