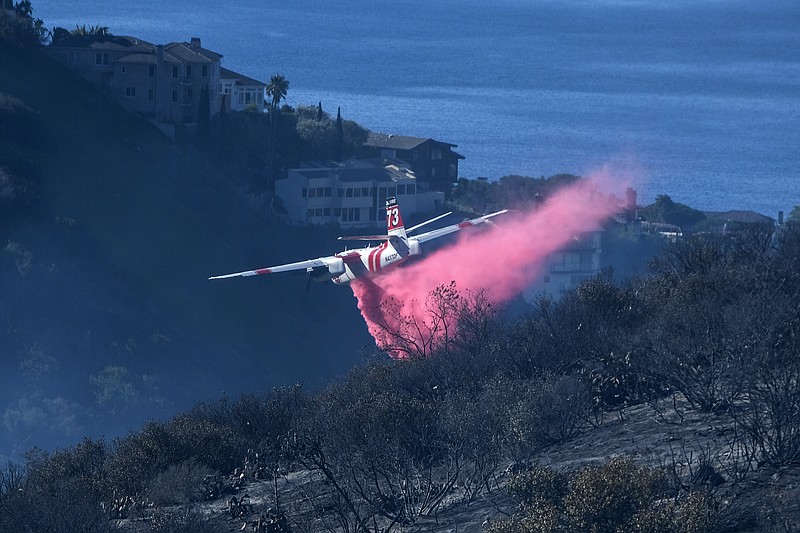 FILE - A plane drops retardant on a wildfire near homes Thursday, Feb. 10, 2022, in Laguna Beach, Calif. U.S. officials are testing a new wildfire retardant after two decades of buying millions of gallons annually from one supplier, but watchdogs say the expensive strategy is overly fixated on aerial attacks at the expense of hiring more fire-line digging ground crews. (AP Photo/Ringo H.W. Chiu, File)

BOISE, Idaho -- U.S. officials are testing a new wildfire retardant after two decades of buying millions of gallons annually from one supplier, but watchdogs say the expensive strategy is overly fixated on aerial attacks at the expense of hiring more fire-line digging ground crews.

The Forest Service used more than 50 million gallons of retardant for the first time in 2020 as increasingly destructive wildfires plague the West. It exceeded 50 million gallons again last year to fight some of the largest and longest-duration wildfires in history in California and other states. The fire retardant cost those two years reached nearly $200 million.

Over the previous 10 years, the agency used 30 million gallons annually.

"No two wildfires are the same, and thus it's critical for fire managers to have different tools available to them for different circumstances a fire may present," the Forest Service said in an email. "Fire retardant is simply one of those tools."

The Forest Service said tests started last summer are continuing this summer with a magnesium-chloride-based retardant from Fortress.

Fortress contends its retardants are effective and better for the environment than products offered by Perimeter Solutions. That company says its ammonium-phosphate-based retardants are superior.

Fortress started in 2014 with mainly former wildland firefighters who aimed to create a more effective fire retardant that's better for the environment. It has facilities in California, Montana and Wyoming, and describes itself as the only alternative to fertilizer-based fire retardants.

The company is headed by Chief Executive Officer Bob Burnham, who started his career as a hotshot crew member fighting wildfires and ultimately rose to become a Type 1 incident commander, directing hundreds of firefighters against some of the nation's largest wildfires. He often called in aircraft to disperse plumes of red fire retardant, a decision he said he wonders about now after learning more about fertilizer-based retardants and developing a new retardant.

The main ingredient in Fortress products, magnesium chloride, is extracted from the Great Salt Lake in Utah, a method and process the company says is more environmentally friendly and less greenhouse-gas producing than mining and processing phosphate. The Forest Service last summer tested the company's FR-100, and this summer said it will test a version called FR-200.

Perimeter Solutions, which has facilities and equipment throughout the West, has had a number of name and ownership changes over the years but has dominated the market for more than two decades. The company's Phos-Chek LC-95A is the world's most used fire retardant. The company is transitioning to a new retardant called Phos-Chek LCE20-Fx, which the company said is made out of food-grade ingredients, making it a cleaner product.

"We're certain that the products that we make are the safest, most effective, most environmentally friendly products available," said Chief Executive Officer Edward Goldberg. "We've spent decades in partnership with the (Forest Service)."

Phosphate is mined in multiple places. Goldberg said they get phosphate both domestically, including from Idaho, and internationally. He declined to go into detail, but said the company hasn't relied on China or Ukraine, and has substituted other suppliers for Russia and Belarus.

The Forest Service said that tests this summer with FR-200 will be limited to single-engine airtankers flying out of an airtanker base in Ronan, Montana. That appears to be to prevent mixing the companies' retardants.

Two Forest Service watchdog groups contend both types of retardant harm the environment, and that the agency should be spending less on retardant and more on firefighters.

Andy Stahl, executive director of the Forest Service Employees for Environmental Ethics, and Timothy Ingalsbee, executive director of Firefighters United for Safety, Ethics, and Ecology, both said that the ammonium-phosphates-based retardant is essentially a fertilizer that can boost invasive plants and is potentially responsible for some algae blooms in lakes or reservoirs when it washes downstream. They said the magnesium-chloride-based retardant is essentially a salt that will inhibit plant growth where it falls, possibly harming threatened species.

Both are concerned about direct hits to waterways with either retardant and potential harm to aquatic species. Aircraft are typically limited to giving streams a 300-foot (90-meter) buffer from retardant, but the Forest Service allows drops within the buffer under some conditions, and they sometimes happen accidentally.

"Their theory is that it's a war, and when you're in a war you're going to have collateral damage," Stahl said. "It's the fire-industrial complex, the nexus between corporate and government agencies combined, with really no interest in ending making warfare on wildfires. It's ever-increasing."

Currently, much of the West is in drought. The National Interagency Fire Center in Boise, Idaho, is reporting that so far this year there have been more than 31,000 wildfires that have burned about 5,000 square miles (13,000 square kilometers). That's well above the 10-year average for the same period of about 24,000 wildfires and 2,000 square miles burned.

Wildfire seasons have become increasingly longer as climate change has made the West much warmer and drier in the past 30 years, and scientists have long warned that the weather will get wilder as the world warms. 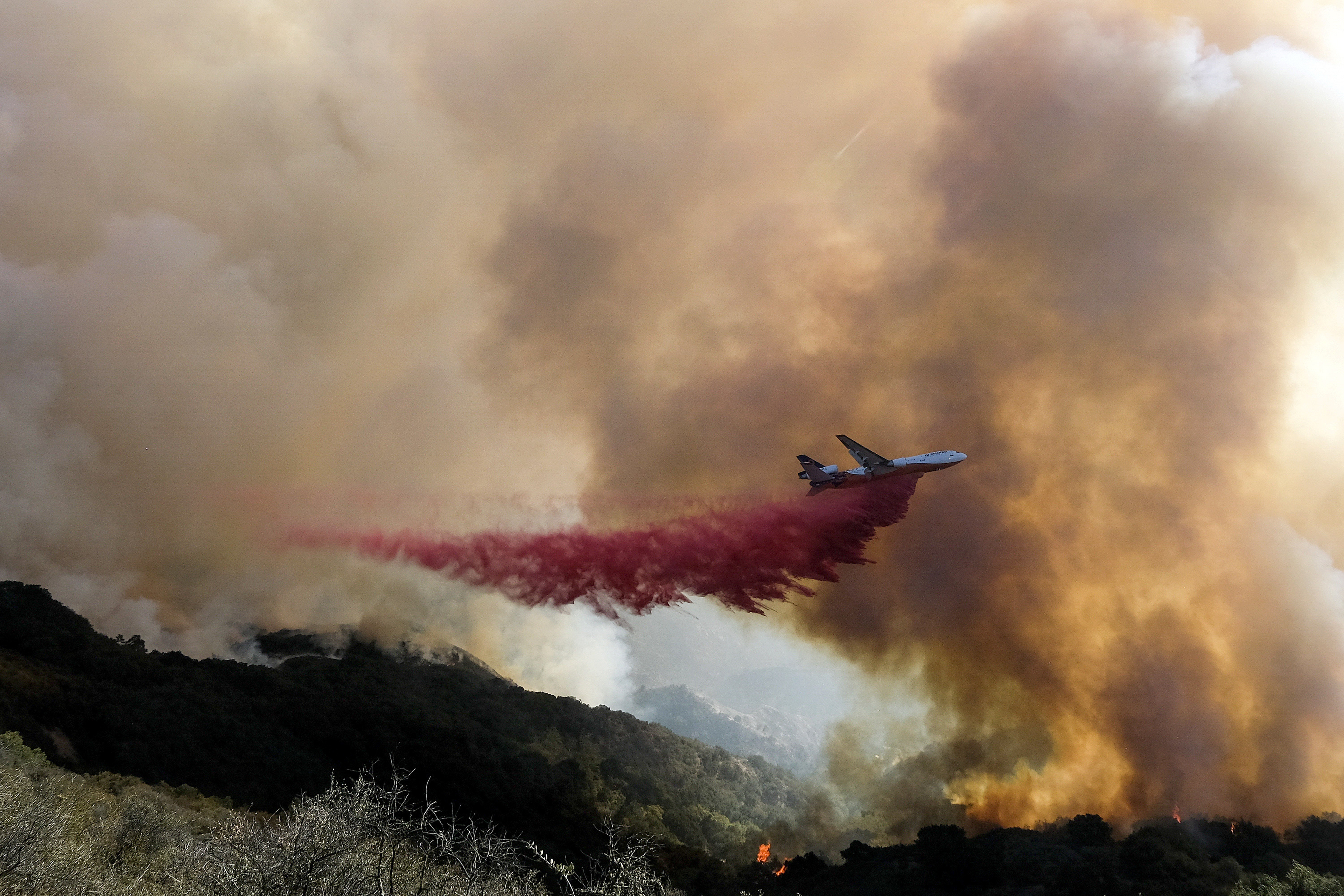 FILE - In this Oct. 13, 2021 photo, an air tanker drops retardant on a wildfire in Goleta, Calif. U.S. officials are testing a new wildfire retardant after two decades of buying millions of gallons annually from one supplier, but watchdogs say the expensive strategy is overly fixated on aerial attacks at the expense of hiring more fire-line digging ground crews. (AP Photo/Ringo H.W. Chiu, File)