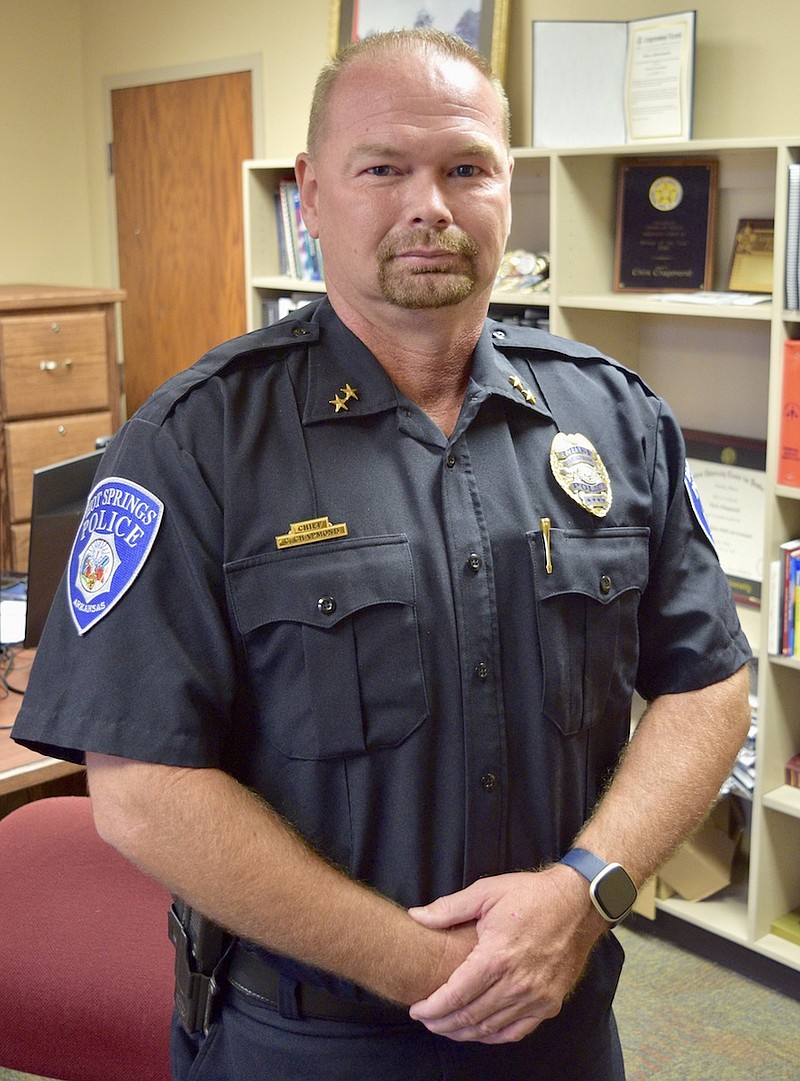 Hot Springs Police Chief Chris Chapmond, a member of the Arkansas School Safety Commission, is shown in his office. - Photo by Donald Cross of The Sentinel-Record

As a member of the Arkansas School Safety Commission, Hot Springs Police Chief Chris Chapmond says that in addition to the training guidelines and physical recommendations the commission is working on for schools in the state, a main defense against school violence is the relationships officers form with the students.

While only speaking for the two school districts under the HSPD's jurisdiction, Hot Springs and Lakeside, Chapmond says having a constant law enforcement presence on school campuses deters a lot of activity.

"I think having that daily interaction with the students helps that intelligence come to those officers that are on campus to be able to have some conversations, or maybe investigate some things that maybe we don't know about," he said Monday.

"I am certain that having them on campus prevents things from occurring every day. You know, whether it may just be a verbal argument or a physical altercation, having those officers there are a huge, huge opportunity for all of us. It's a huge safety factor," Chapmond said.

At the commission's meeting Tuesday, former special agent for the Secret Service, Cindy Marble, spoke about behavioral threat assessment teams in schools. Gov. Asa Hutchinson charged the commission with updating its 2018 analysis of school safety, looking at the physical and mental health of students, and identifying new recommendations on best practices.

Its initial report is due by Aug. 1.

Chapmond said regarding what is going through the minds of students on campus and if they are thinking of doing harm, there is no way to tell, but he knows the commission, in 2018, recommended there be a constant armed presence on every campus and both Lakeside and Hot Springs have done that.

"That's beneficial to all of us, and then you add our working relationship with both of those school districts. At any point in time we can dump a ton of resources on their campus within a moment's notice," he said.

Though the School Resource Officers are employees of the department, there is a cost-sharing agreement with the schools to provide a portion of their salary and benefits based on the amount of time they are spending on school campuses, Chapmond said, noting the SROs are a great program and opportunity to build relationships between the districts and law enforcement agencies.

"The added benefit is that they're building bridges with our kids," he said. "That opportunity -- there's been so many success stories with our school resource officer having an opportunity to engage our youth in the communities. That's an often overlooked aspect of it. It's not just a physical security standpoint, but the opportunity to engage with those kids from an educational standpoint or mentorship -- just a lot of great value."

Both Hot Springs and Lakeside now have their own internal police departments, allowing HSPD to reduce, or eliminate, the number it has to send. Lakeside has its own security staff funded under Anthony Schaber, a former HSPD officer who now serves as chief of the school-operated department, while Chief Carl Seymour oversees the law enforcement program in the Hot Springs School District. HSPD currently has one SRO assigned to Hot Springs to help cover its six different campuses.

"Relationship is still great. Still a cost-sharing program. It's a 75/25 split salary benefits. Obviously, school's not in session year-round, so we get the benefit of having that officer through the off-times and they're still an employee with us. Again, it allows us to continue to have that direct conversation and line of communication with the school districts, and it's a fantastic program," he said.

Act 629 of 2019 allows schools to appoint institutional law enforcement officers, much like colleges and universities do. The Jessieville, Mountain Pine and Cutter Morning Star school districts do this, while Lake Hamilton and Fountain Lake contract SROs through the Garland County Sheriff's Office within their respective internal departments.

Fountain Lake Superintendent Michael Murphy said Thursday their district has submitted a plan to the state to employ its own officer to have jurisdiction on campus and serve as the chief resource officer.

"At the end of the day, here locally, we want to continue to build those relationships. We want to ensure that the school districts -- and they do -- have a voice in developing those security measures and that we're all on the same page from a training standpoint, in the event that we have to respond that we're all trained in the same way; we're aware of the technology; we're aware of the processes. At the end of the day, we want to do the best job that we can to protect our students and our teachers," Chapmond said.

He noted it is an honor to help make decisions on school safety, or anything, from a statewide basis.

"We are in a position to add our perspective and some of our thought processes from a law enforcement standpoint and I think we're pretty fortunate to be able to have those conversations," he said. 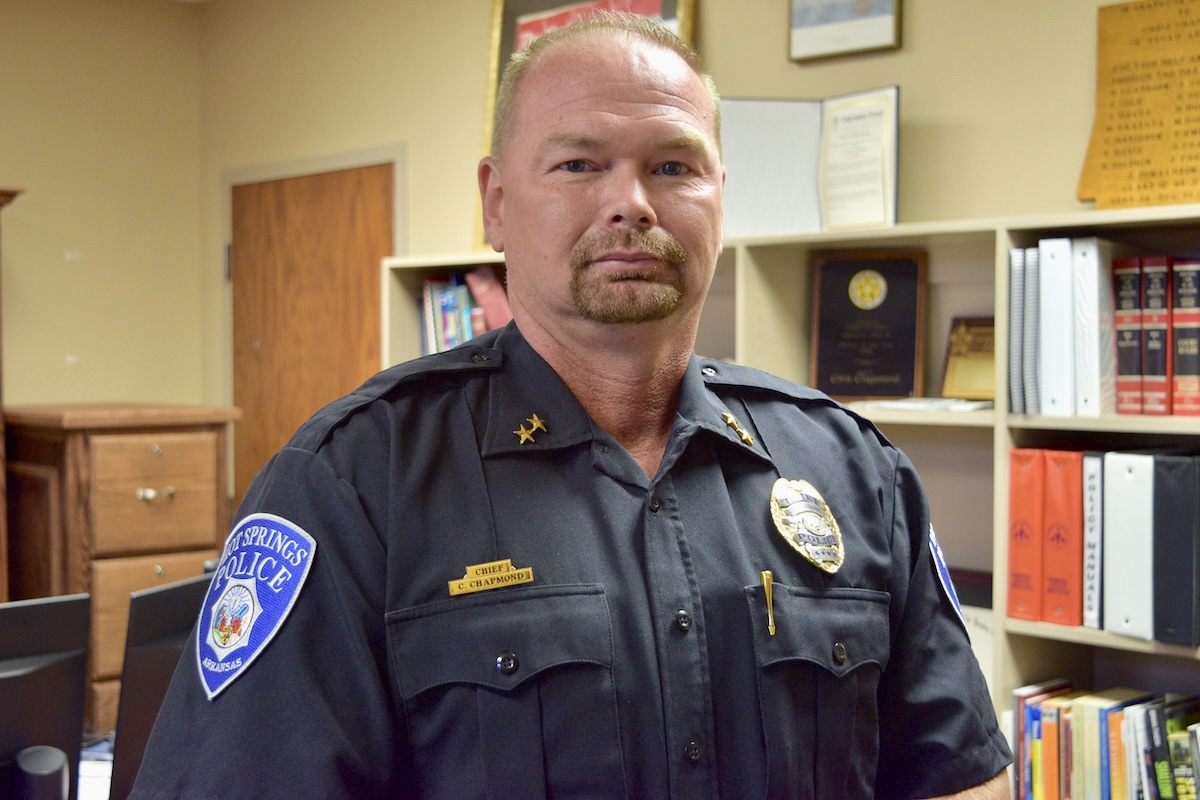 Hot Springs Chief of Police and member of the Arkansas School Safety Commission, Chris Chapmond, stands in his office Monday morning. - Photo by Donald Cross of The Sentinel-Record

A Hot Springs Police Department patrol unit is shown outside the department on Monday. - Photo by Donald Cross of The Sentinel-Record