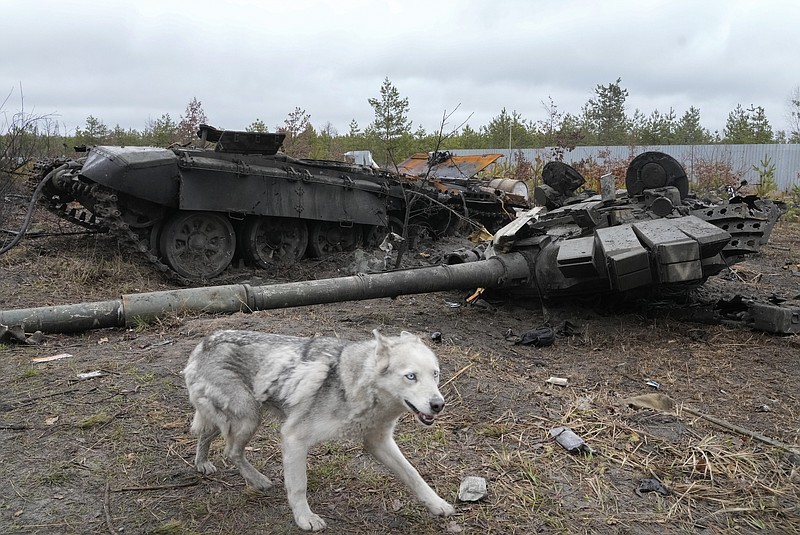 FILE - A dog runs by a Russian tank destroyed during fighting two days ago, in the village of Dmytrivka close to Kyiv, Ukraine, Saturday, April 2, 2022. Moscow has not given a casualty count since it said some 1,300 troops were killed in the first month of fighting, but Western officials have said that was just a fraction of real losses. (AP Photo/Efrem Lukatsky, File)

After more than four months of ferocious fighting, Russia claimed a key victory: full control over one of the two provinces in Ukraine's eastern industrial heartland.

But Moscow's seizure of the last major stronghold of Ukrainian resistance in Luhansk province came at a steep price. The critical question now is whether Russia can muster enough strength for a new offensive to complete its capture of the Donbas and make gains elsewhere in Ukraine.

"Yes, the Russians have seized the Luhansk region, but at what price?" asked Oleh Zhdanov, a military analyst in Ukraine, noting that some Russian units involved in the battle lost up to a half their soldiers.

Even President Vladimir Putin acknowledged Monday that Russian troops involved in action in Luhansk need to "take some rest and beef up their combat capability."

That raises doubts about whether Moscow's forces and their separatist allies are ready to quickly thrust deeper into Donetsk, the other province that makes up the Donbas. Observers estimated in recent weeks that Russia controlled about half of Donetsk, and battle lines have changed little since then.

Donetsk Gov. Pavlo Kyrylenko urged 350,000 people to evacuate the province to save lives and to enable the Ukrainian army to better defend towns from the Russian advance.

"The destiny of the whole country will be decided by the Donetsk region," he said in Kramatrosk, the province's administrative center and home to the Ukrainian military's regional headquarters. "Once there are less people, we will be able to concentrate more on our enemy and perform our main tasks."

The governor's call appeared to represent one of the biggest suggested evacuations of the war. According to the U.N. refugee agency, more than 7.1 million Ukrainians are estimated to be displaced within Ukraine, and more than 4.8 million refugees left the country since Russia's invasion started on Feb. 24

If Russia succeeds in the Donbas, it could free up its forces to grab even more land and dictate the terms of any peace agreement. If Ukraine, on the other hand, manages to pin the Russians down for a protracted period, it could build up the resources for a counteroffensive.

Exhausting the Russians has long been part of the plan for the Ukrainians, who began the conflict outgunned -- but hoped Western weapons could eventually tip the scales in their favor.

They are already effectively using heavy howitzers and advanced rocket systems sent by the U.S. and other Western allies, and more is on the way. But Ukrainian forces have said they remain badly outmatched.

After a failed attempt at a lightning advance on the capital of Kyiv in the opening weeks of the war, Russian forces withdrew from many parts of northern and central Ukraine and turned their attention to the Donbas, a region of mines and factories where Moscow-backed separatists have been fighting the Ukrainians since 2014.

Since then, Russia has adopted a slow-and-steady approach that allowed it to seize several remaining Ukrainian strongholds in Luhansk over the course of recent weeks.

While Ukrainian officials have acknowledged that their troops have withdrawn from the city of Lysychansk, the last bulwark of their resistance in Luhansk, the presidential office said Tuesday the military was still defending small areas in the province.

Zhdanov, the analyst, predicted that the Russians would likely rely on their edge in firepower to "apply the same scorched earth tactics and blast entire cities away" in Donetsk. The same day that Russia claimed it had taken Lysychansk, new artillery attacks were reported in Donetsk.

But Russia's approach is not without drawbacks. Moscow has not given a casualty count since it said some 1,300 troops were killed in the first month of fighting, but Western officials have said that was just a fraction of real losses. Since then, Western observers have noted that the number of Russian troops involved in combat in Ukraine has dwindled, reflecting both heavy attrition and the Kremlin's failure to fill up the ranks.

The limited manpower has forced Russian commanders to avoid ambitious attempts to encircle large areas in the Donbas, opting for smaller maneuvers and relying on heavy artillery barrages to slowly force the Ukrainians to retreat.

The military has also relied heavily on separatists, who have conducted several rounds of mobilization, and Western officials and analysts have said Moscow has increasingly engaged private military contractors. It has also tried to encourage Russian men who have done their tour of duty to sign up again, though it's is unclear how successful that has been.

While Putin so far has refrained from declaring a broad mobilization that might foment social discontent, recently proposed legislation suggested that Moscow was looking for other ways to replenish the ranks. The bill would have allowed young conscripts, who are drafted into the army for a year and barred from fighting, to immediately switch their status and sign contracts to become full professional soldiers. The draft was shelved amid strong criticism.

Some Western officials and analysts have argued that attrition is so heavy that it could force Moscow to suspend its offensive at some point later in the summer, but the Pentagon has cautioned that even though Russia has been churning through troops and supplies at rapid rates it still has abundant resources.

U.S. director of national intelligence Avril Haines said Putin appeared to accept the slow pace of the advance in the Donbas and now hoped to win by crushing Ukraine's most battle-hardened forces.

"We believe that Russia thinks that if they are able to crush really one of the most capable and well-equipped forces in the east of Ukraine ... that will lead to a slump basically in the Ukrainian resistance and that that may give them greater opportunities," Haines said.

If Russia wins in the Donbas, it could build on its seizure of the southern Kherson region and part of neighboring Zaporizhzhia to try to eventually cut Ukraine off from its Black Sea coast all the way to the Romanian border. If that succeeded, it would deal a crushing blow to the Ukrainian economy and also create a corridor to Moldova's separatist region of Transnistria that hosts a Russian military base.

But that is far from assured. Mykola Sunhurovsky, of the Razumkov Center, a Kyiv-based think tank, predicted that growing supplies of heavy Western weapons, including HIMARS multiple rocket launchers, will help Ukraine turn the tide of the war.

"The supplies of weapons will allow Ukraine to start a counteroffensive in the south and fight for Kherson and other cities," Sunhurovsky said.

But Ukraine has also faced massive personnel losses: up to 200 soldiers a day in recent weeks of ferocious fighting in the east, according to officials.

"Overall, local military balance in Donbas favors Russia, but long term trends still favor Ukraine," wrote Michael Kofman, an expert on the Russian military and program director at the Virginia-based CNA think tank. "However, that estimate is conditional on sustained Western military assistance, and is not necessarily predictive of outcomes. This is likely to be a protracted war." 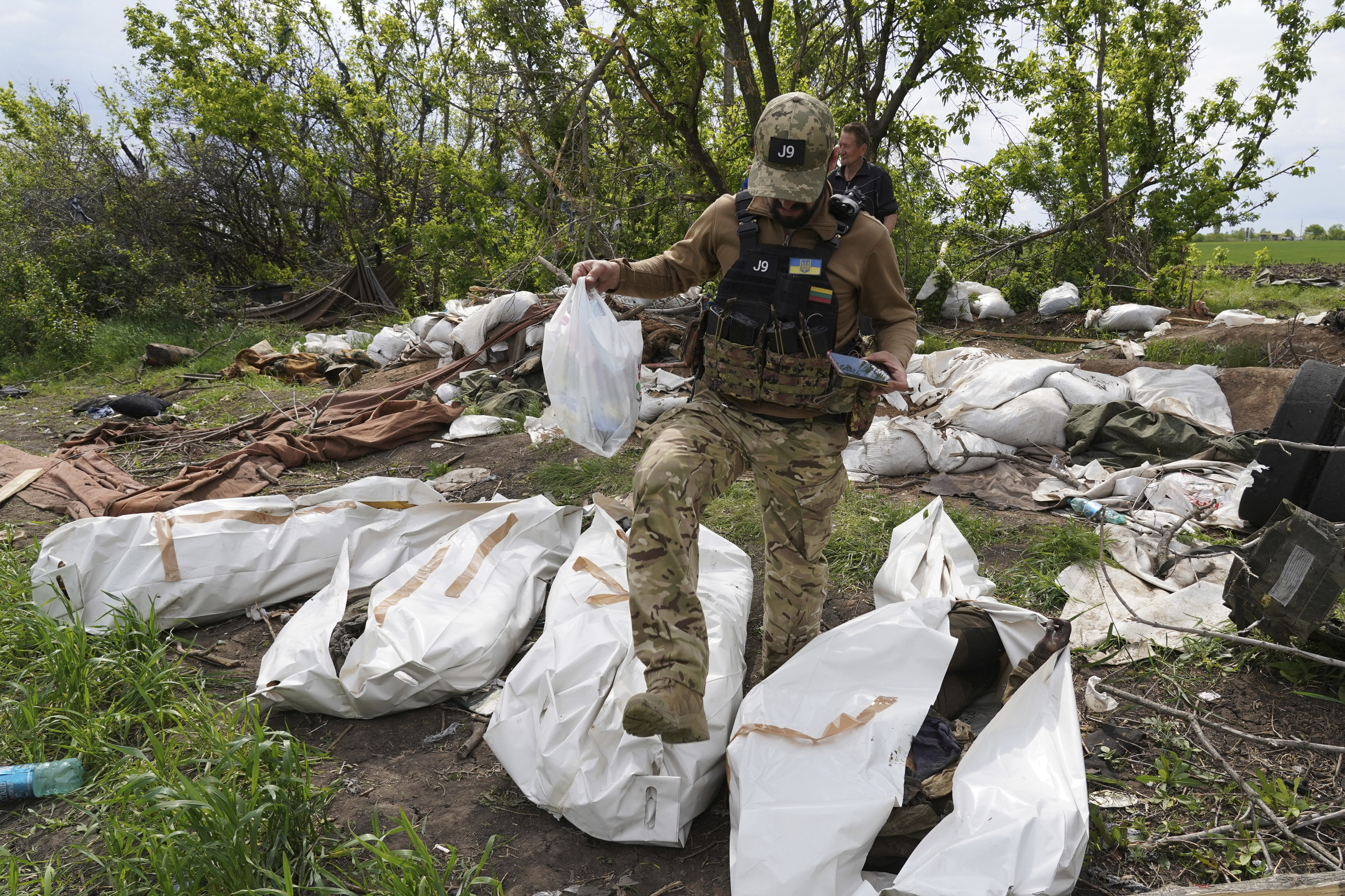 FILE - A Ukrainian serviceman works during the exhumation of killed Russian soldiers' at their former positions near the village of Malaya Rohan, on the outskirts of Kharkiv, Wednesday May 18, 2022. Moscow has not given a casualty count since it said some 1,300 troops were killed in the first month of fighting, but Western officials have said that was just a fraction of real losses. (AP Photo/Andrii Marienko, File) 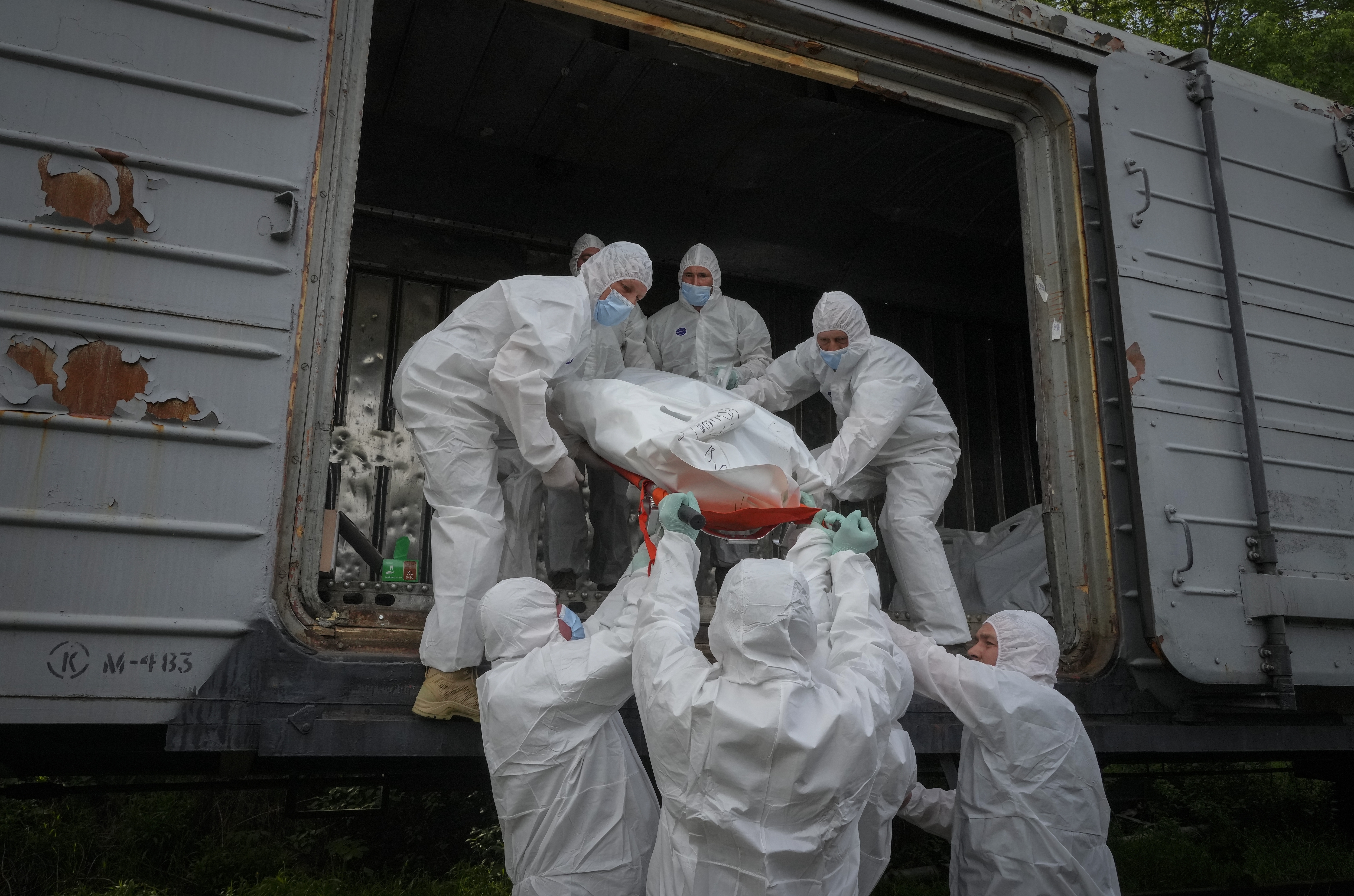 FILE - Ukrainian servicemen load bodies of Russian soldiers in to a railway refrigerator carriage in Kyiv, Ukraine, Friday, May 13, 2022. While Moscow has not updated its casualty numbers since March 25, when it said 1,351 of its troops were killed and 3,825 were wounded during the first month of fighting, Western officials noted that it was just a fraction of real losses. (AP Photo/Efrem Lukatsky, File) 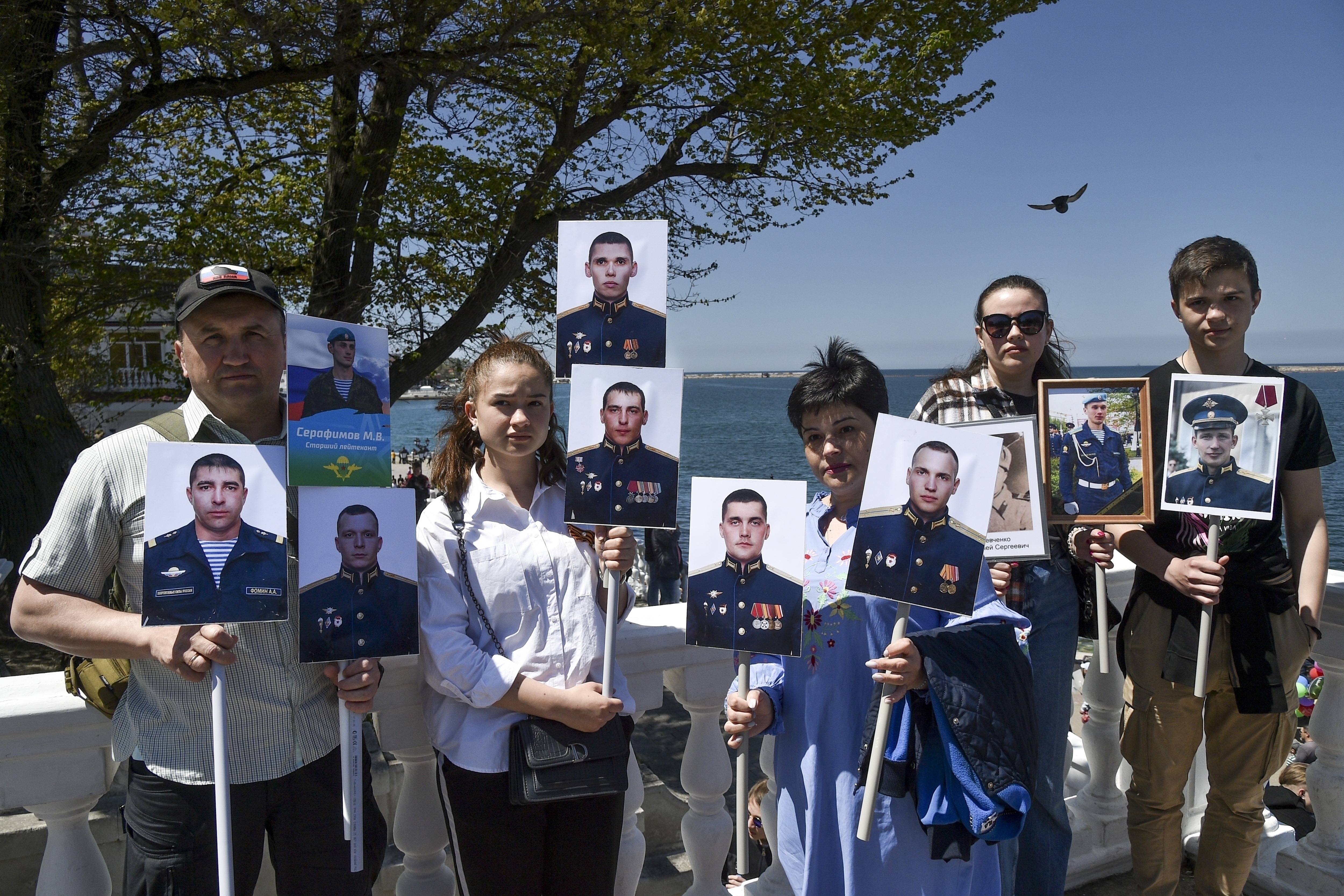 FILE - Relatives of servicemen who died during the Russian Special military operation in Donbas pose for a photo holding portraits of Russian soldiers killed during a fighting in Ukraine, after attending the Immortal Regiment march through a street marking the 77th anniversary of the end of World War II, in Sevastopol, Crimea, May 9, 2022. Moscow has not given a casualty count since it said some 1,300 troops were killed in the first month of fighting, but Western officials have said that was just a fraction of real losses. (AP Photo, File) 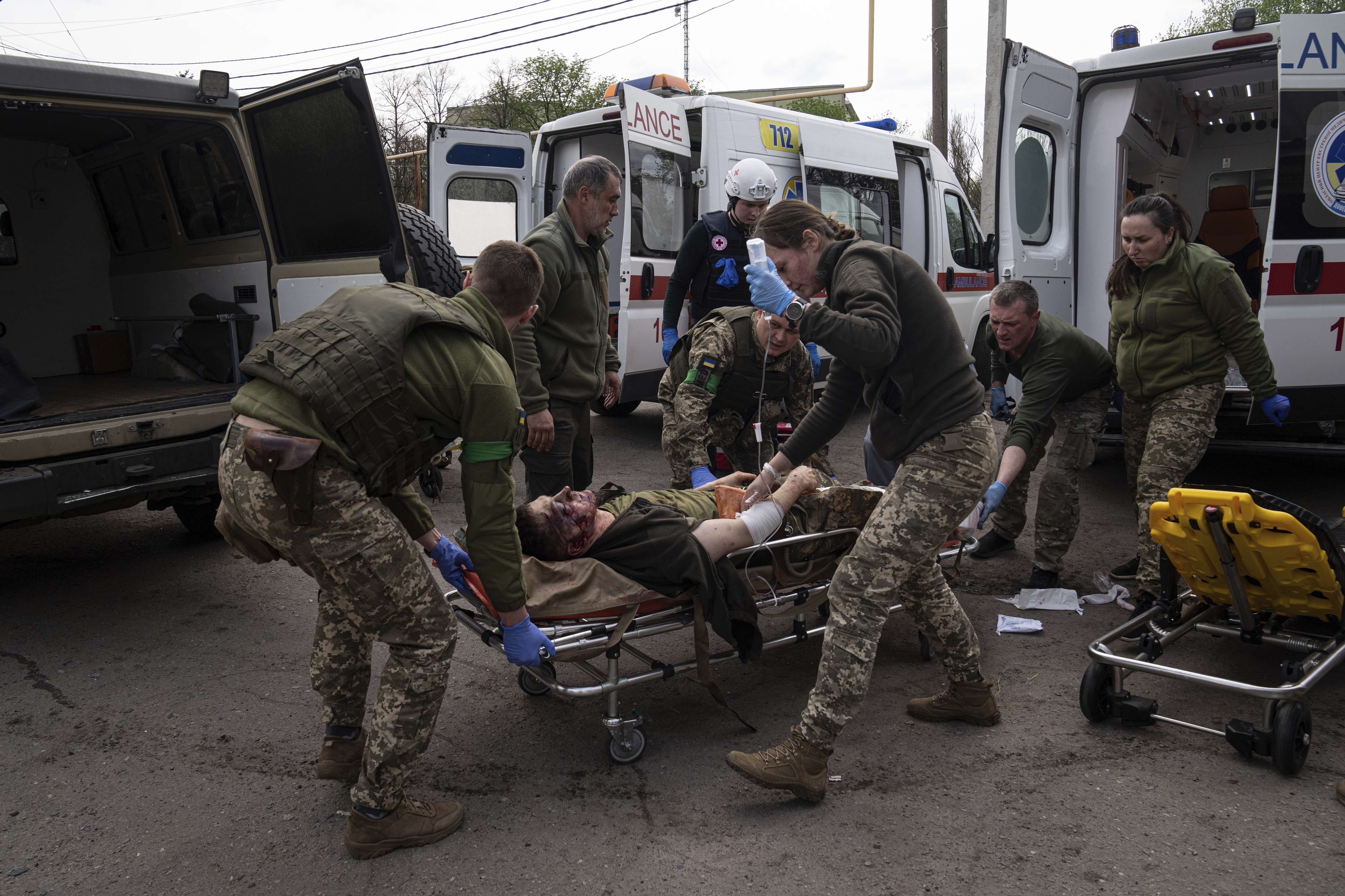 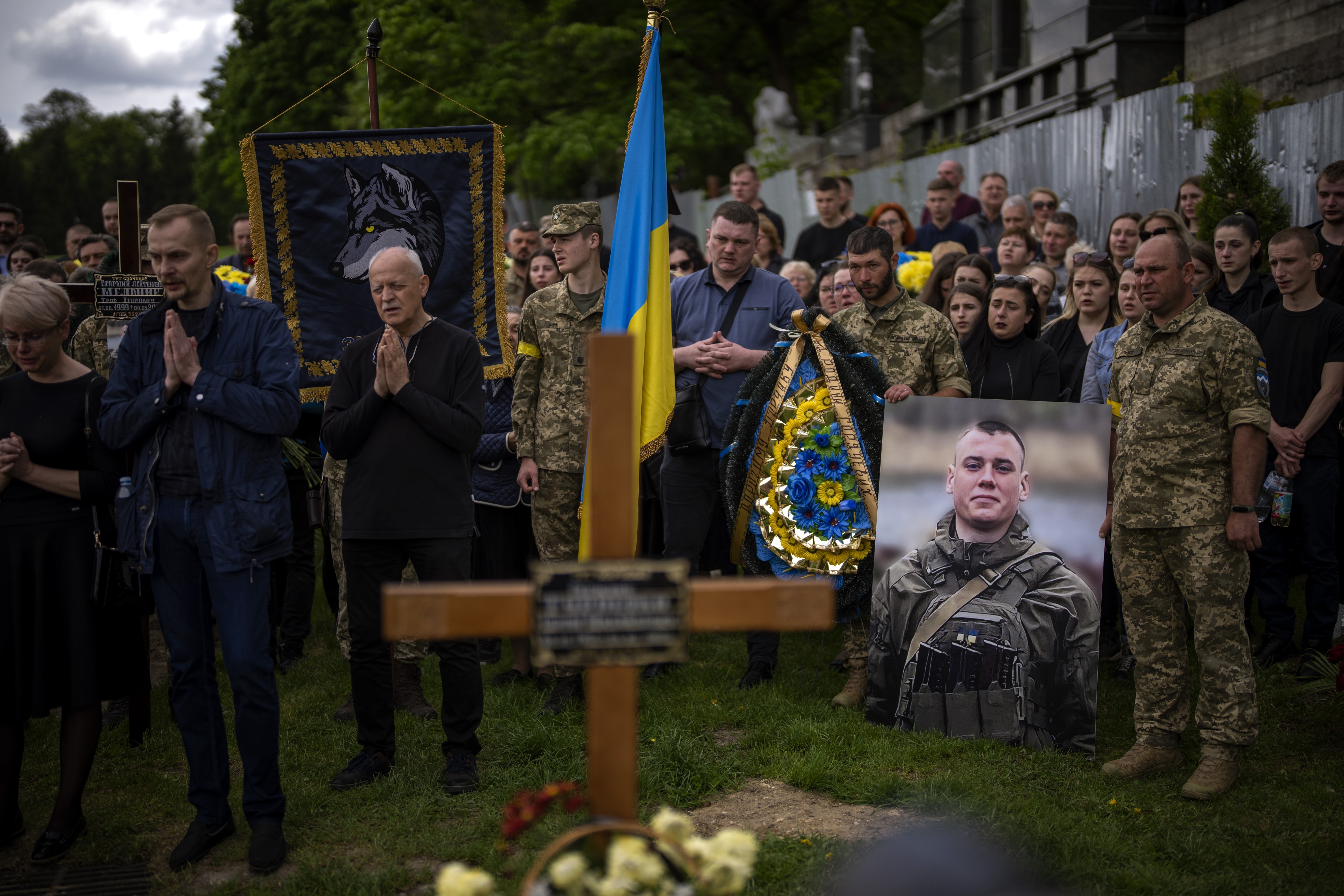 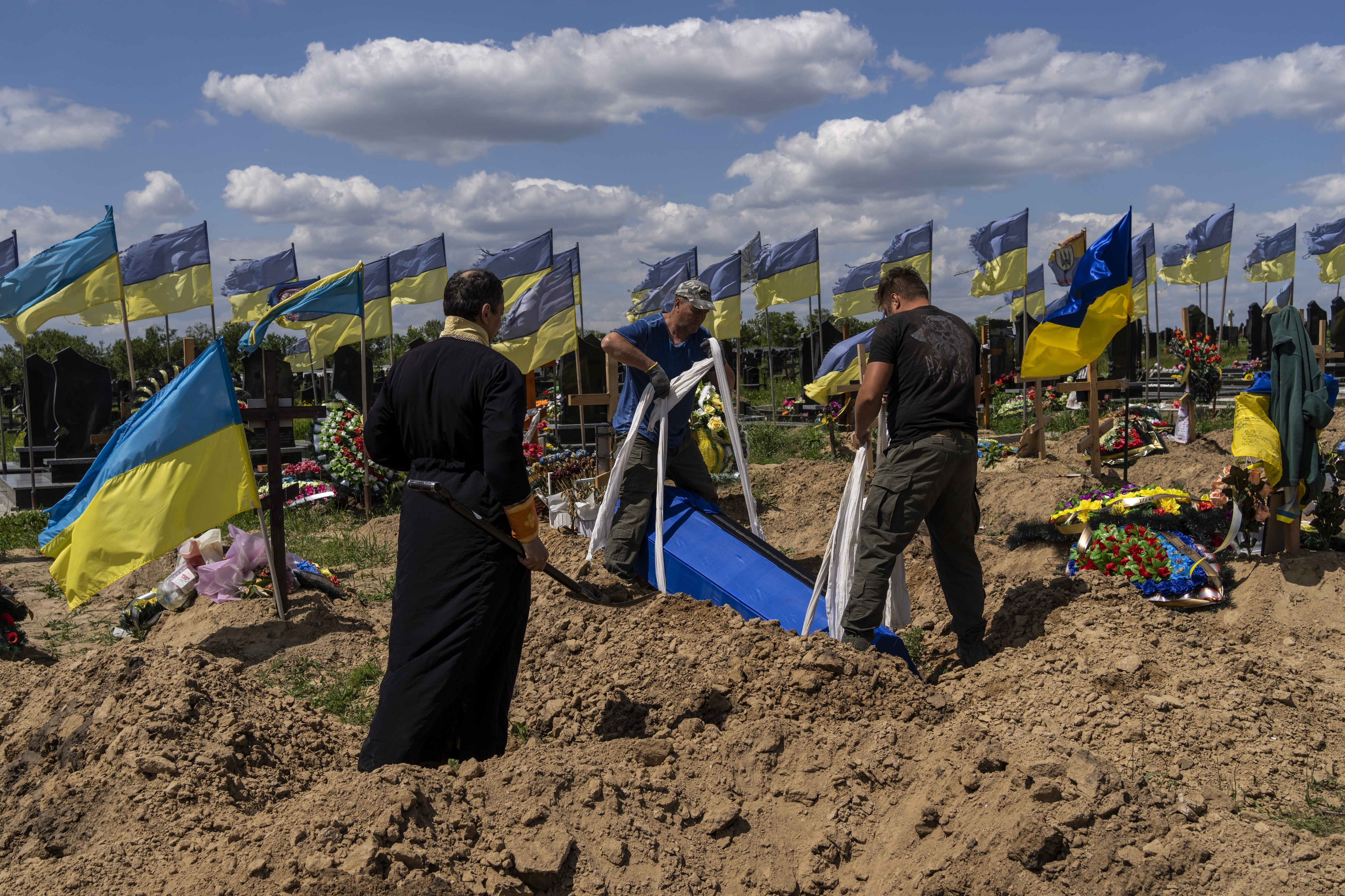 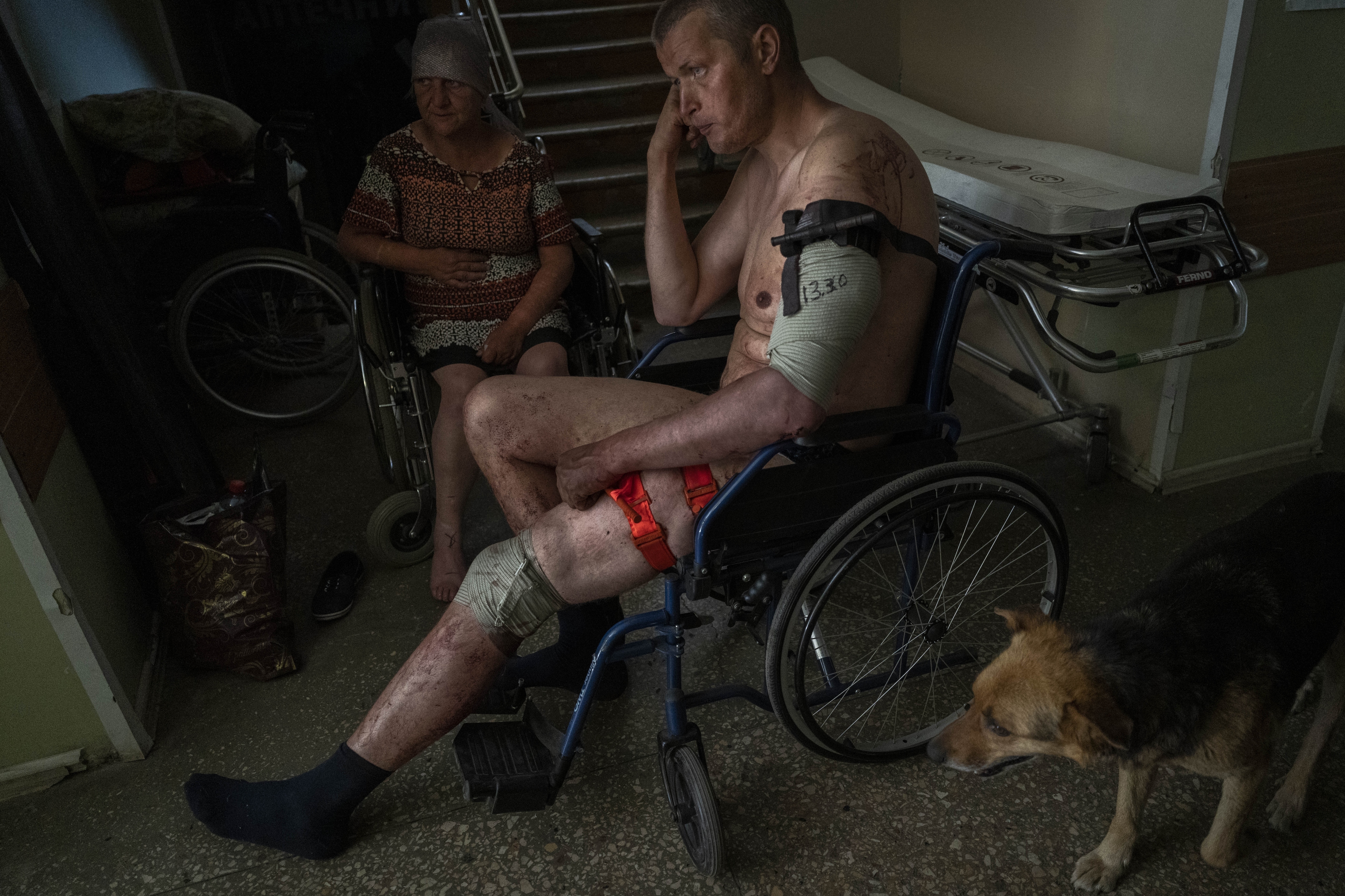 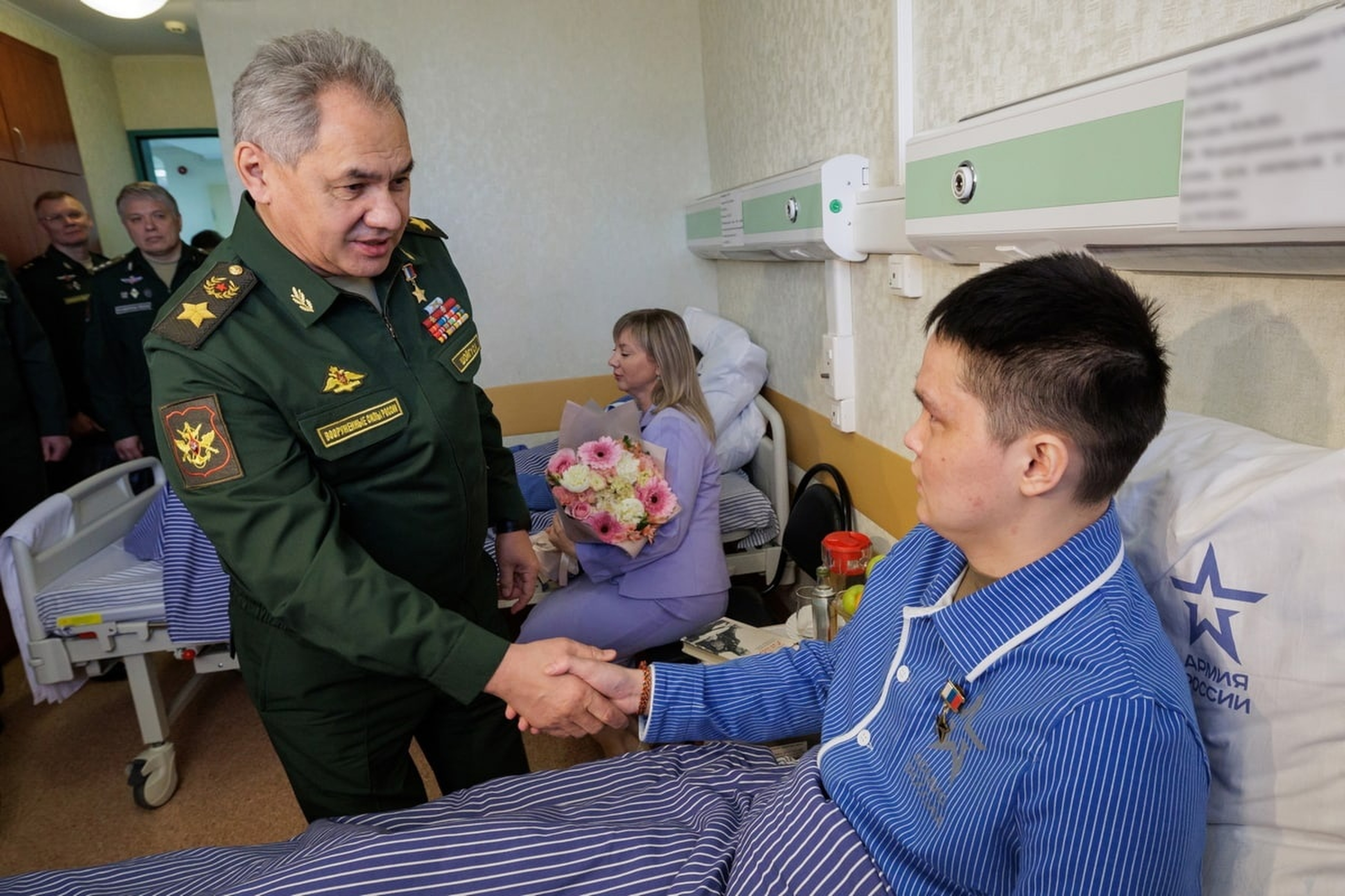 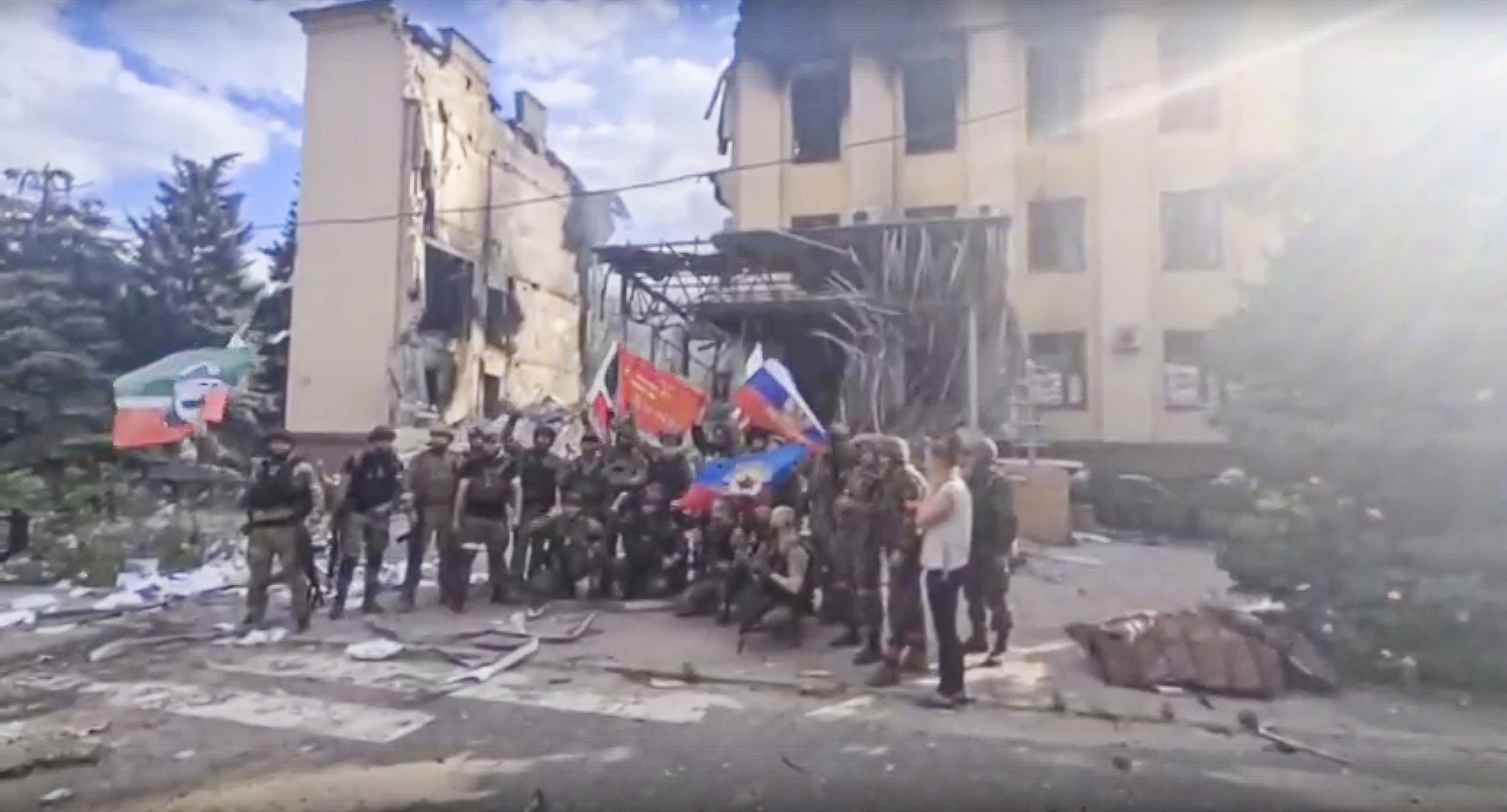 FILE - This photo taken from video provided by Ramzan Kadyrov's Official Telegram channel released on Saturday, July 2, 2022, shows Russian troops including soldiers of Chechen regiment waving Russian and Chechen republic national flags as they pose for a photo in front of a destroyed building in Lysychansk, Ukraine. After more than four months of ferocious fighting, Russia claimed full control over one of the two provinces in Ukraine’s eastern industrial heartland. (Ramzan Kadyrov's Official Telegram channel via AP, File)