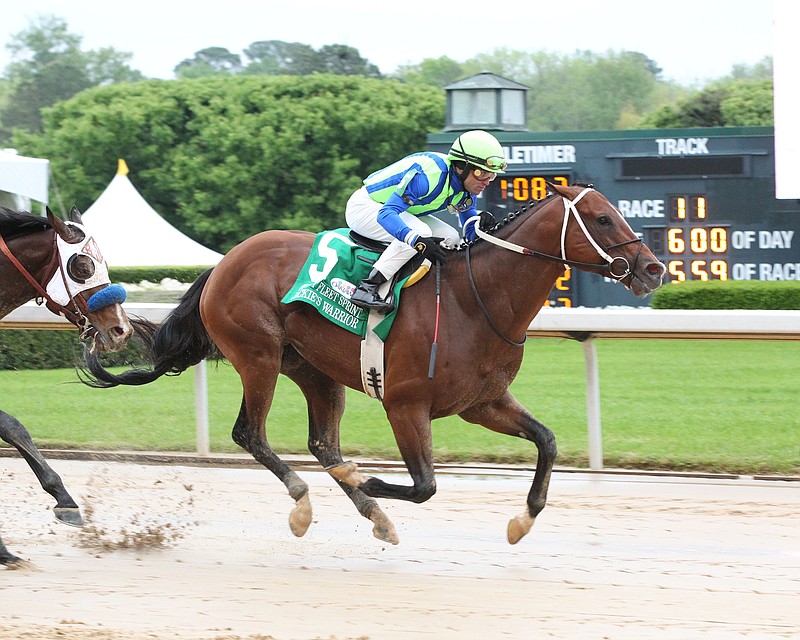 Steve Asmussen's only Oaklawn stakes winner this year, Jackie's Warrior looks like the Hall of Fame trainer's next champion, a repeater at that.

And at Saratoga, where history is made and recorded, the 4-year-old colt is perfect in a 12-for-16 career.

On Saturday, Kirk and Judy Robison's son of Maclean's Music scored his fifth victory at racing's ritziest address in a Grade 1 stake honoring a racing patriarch. Jackie's Warrior, never winning by a lot but ever punctual, took the $350,000 Alfred G. Vanderbilt Handicap by two lengths in upstate New York

With Joel Rosario up under 127 pounds, 6 more than his nearest rival and 10 greater than runner-up Kneedeepinsnow, Jackie's Warrior improved credentials to become Asmussen's fourth Horse of the Year recipient and repeat Eclipse Award-winning male sprinter.

A Grade 1 winner at Saratoga in all three racing seasons, Jackie's Warrior added the Vanderbilt to the Hopeful at 2 and the Allen Jerkens Memorial at 3, this one saluting the late sportsman who raced mighty Native Dancer in the 1950s. The $192,500 first prize raised his yearly earnings to $1,113,200, a stellar feat in its own right, and $2,667,164 overall.

Jackie's Warrior made his 4-year-old debut at Oaklawn April 16 in the Grade 3 Count Fleet Sprint Handicap, first by a deceptively close three-quarters of a length after six furlongs in 1:09.74. He then shone on Derby Day in the May 7 Churchill Downs and at Belmont Park June 10 in the Grade 2 True North.

One of his rare defeats came at Oaklawn in his 3-year-old debut (2021 Grade 3 Southwest) against future Belmont Stakes winner and two-time champion Essential Quality. He has two Breeders' Cup losses, in the 2020 Juvenile at Keeneland and the 2021 Sprint at Del Mar.

Asmussen later scored a stakes double with Winchell Thoroughbreds' Epicenter, beaten Kentucky Derby and Preakness favorite, in the Grade 2 $558,000 Jim Dandy. Again with Rosario up, the Not the Time colt trailed early before a five-wide move on the far turn propelled him toward a 1 1/2-length victory, his nine furlongs in 1:48.99. Carrying 122 pounds, he returned $4.20 as favorite in a four-horse field

Cooling off the Chad Brown express at Saratoga, Epicenter finished immediately ahead of Derby runner-up Zandon with the trainer's Early Voting last in his first start since winning the Preakness May 21. Third was Brad Cox-trained stakes winner Tawny Port.