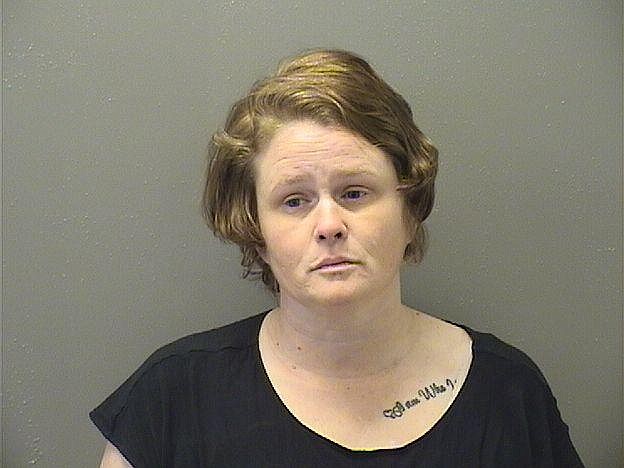 A local woman was arrested on a felony theft charge Wednesday for allegedly stealing a man's truck for a four-hour joy ride last month and reportedly leaving her cellphone behind.

Amber Liane Edgin, 38, who lists a Winkler Road address, was taken into custody shortly before 4 p.m. and charged with theft of property over $5,000, punishable by up to 10 years in prison.

Edgin was released later that day on a $3,500 bond and is set to appear on Sept. 8 in Garland County District Court.

According to the probable cause affidavit, on May 15, shortly after 12:30 p.m., a man reported that he had left his white 2004 Chevrolet Silverado, valued at $12,000, in the parking lot at Orr Toyota, 4709 Central Ave., while he was looking at vehicles with his wife.

He noted he had left the truck running and unlocked while they were looking around and then suddenly he saw the truck being driven away. His wife reportedly saw a white female get into the truck and drive off.

The wife had left her purse in the truck which contained a debit card, three credit cards, cash, a checkbook, keys, and ID cards, reportedly a total value of $1,105.

Later that day, the owner of the truck found his vehicle in the back parking lot of the dealership and took possession of it, but noted his wife's purse was gone and there was a cellphone in the vehicle that didn't belong to him or his wife.

Hot Springs police Detective Matthew Cheatham was allegedly able to trace the phone left behind to Edgin and during the investigation he learned Edgin wanted to turn herself in for stealing the truck.

On Wednesday, shortly after 3:30 p.m., Edgin came to the police department and was interviewed after being read her rights. She reportedly admitted to seeing the couple walk from the truck so she got in it and drove off, leaving her vehicle behind in the lot.

She said she drove around for about four hours and then brought the truck back to the lot, got back in her car and drove away. She allegedly stated the items that were in the vehicle were "thrown into the trash," but she didn't know the location.

When shown the cellphone that was found, Edgin reportedly stated it was "probably hers." Later, when Cheatham asked her for her phone number she told him the police had her phone.