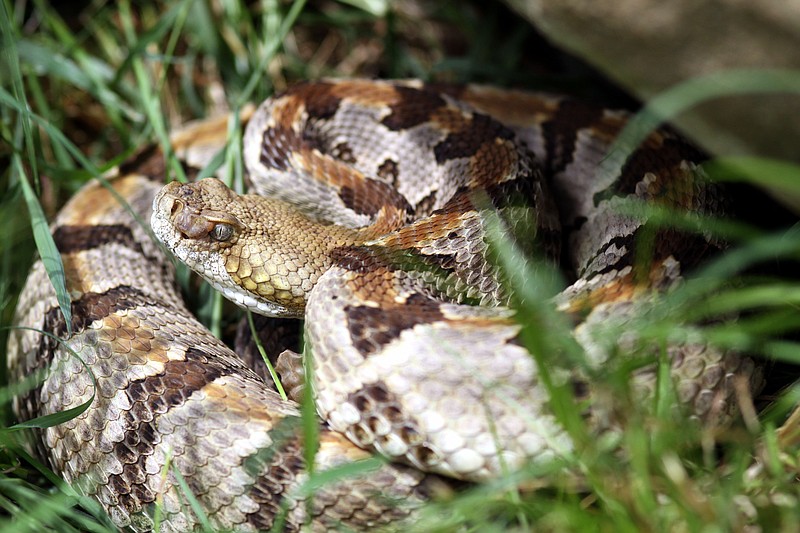 A file photo of a timber rattler. - File photo by Corbet Deary of The Sentinel-Record

As summer arrives in the Natural State, many Arkansans will take to hiking trails, campgrounds, lakes, rivers, and favorite swimming holes to enjoy time outdoors. While doing so, it's important to be aware of Arkansas' native snakes, including six venomous species, and how to avoid them.

Arkansas has 39 native snake species. Six of these are venomous: the Eastern Copperhead, Northern Cottonmouth, Western Diamond-backed Rattlesnake, Timber Rattlesnake, Western Pygmy Rattlesnake and Texas Gulf-coast Coral snake. Of these, only the cottonmouth can be found in wetland habitats such as swamps, streams, and drainage ditches. For a guide on identifying these venomous species and more information on native snakes, check out the Cooperative Extension Service's Snakes of Arkansas fact sheet at https://bit.ly/3HBttL6.

While many people fear snakes, deaths from venomous snakebites are rare. From 1983 to 2018, 68 deaths caused by venomous snakes were reported to Poison Control Centers.

While seeing a snake in one's yard can be frightening at first, nonvenomous snakes can be an asset to homeowners. They help control other wildlife on the property, preying on rodents, insects, toads, frogs, crawfish, minnows, and even other snakes.

If you have a nonvenomous snake in your yard, you should probably keep it instead of killing it because it could be defending its territory against the snakes you don't want to be there. And it's not going to harm you. As a matter of fact, it'll be eating mice and other pests that might get into your home.

It's important to remember that snakes are "more afraid of us than we are of them" and to treat them with respect. To be "snake aware," follow these guidelines:

• Walk on paths with clear visibility and little ground cover. If walking at night, be sure to use a light source to brighten the path.

• Never step over logs or other obstacles unless one can see the other side. Carefully step on top of a log, after checking that there is not a snake resting atop of it and looking on the other side. Snakes can hide underneath the log, right alongside where it meets the ground, waiting for prey.

• Watch where you put your hands. Don't put fingers under debris you intend to move. Flip with a wooden pole to make sure a snake isn't hidden underneath.

• Make noise and be watchful, particularly of where you are about to step.

• Carry a walking stick to clear away leaves, make noise, flip objects, and keep balance when peeking over logs or other obstacles before crossing.

• Wear close-toed shoes or boots, as many snakebites result when walking barefoot or wearing sandals around the yard.

• If you encounter a snake, step back and allow it to pass. Snakes usually don't move fast, and one can retreat from the snake's path.

Snakes are ectothermic, or "coldblooded," which means their body temperature is like their surroundings, so they seek particular locations to regulate their temperature. Most snakes prefer to maintain body heat at around 86 degrees, though they are active in temperatures ranging from 50 to 104 degrees.

During the hot summer months, snakes are more active at night and seek cooler shelter during the day.

Keep an eye out for snakes while swimming or boating. Cottonmouths are the only venomous snake found in water in Arkansas, and they're more likely to swim in brackish water such as streams or swamps. It's important to stay alert for snakes in overhanging trees while canoeing or kayaking.

Look up if in a canoe. Always be mentally ready for a snake to drop down, then to pick up the paddle and scoop it out. Don't panic. It seems that right when a snake drops, it's stunned. It will sit there for a second, and that's your chance to get it out.

If one does get bit by a venomous snake, go straight to the hospital without delay. For those venturing into more remote wilderness, it's important to prepare for such an emergency.

If you're in a wilderness situation without reasonably close access to a hospital, I would say you need to educate yourself and learn what you need to have in case of a snake bite.

If you're sure the bite is from a nonvenomous snake, then treat it just like any other bite or wound.

Clean it, keep it bandaged, and watch it for signs of infection.

Even though snakes can cause a fright, they will usually avoid a confrontation with people.

We all may get a shock or surprise when you first see the snake, but you need to realize that the snake is not going to harm you. It's that old saying, it's as scared as we are. You're the smarter being. Stay in control, get out of its path, and move on.

To learn more about this information sheet or other publications visit http://www.uaex.uada.edu.

There are several 4-H Clubs for Garland County youths who are 5 to 19 years old. For more information on all the fun 4-H activities available, call Carol Ann McAfee at the Extension office, 501-623-6841, or email [email protected]

Master Gardener meetings are held on the third Thursday of each month at the Elks Lodge. They're open to the public and guests are welcome. For more information call Luke Duffle at 623-6841 or email him at [email protected]

Are you interested in joining an existing Extension Homemakers Club? EHC is the largest volunteer organization in the state. For information about EHC, call Alison Crane at 501-623-6841 or email [email protected] 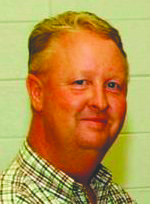 Print Headline: Keep an eye out for the state’s venomous snakes this summer