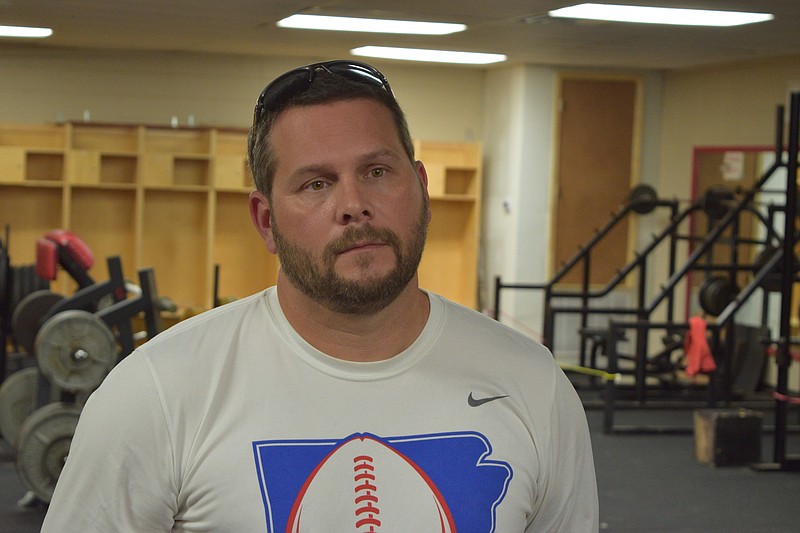 MOUNTAIN PINE -- Although he will not take over the program officially until July 1, Daryl Scott has been named the new head football coach at Mountain Pine.

Scott, who was an assistant coach at Drew Central, made the decision to return to Garland County around the first of the year. When he saw the head coaching position available, he decided to try his luck.

"Me and my wife talked, and we decided we just need to move back here to be closer to family, whether I was going to coach football again or not," he said. "So I told them when we got back from Christmas break that I was going to, you know, resign. ... As the weeks passed on after Christmas break, I heard this job had come open. And so I thought, 'Why not?' You know, it's the perfect opportunity. I'm moving back here anyway, so I applied for it and things worked out, luckily."

Before going to Drew Central, Scott was an assistant at Hot Springs. Matt Gonzales, who is a friend of Scott's, got the head coaching job and invited him to be an assistant coach.

"He talked to me about coming to help with him with offense, so I went down there with him," he said. "They hadn't had a history of winning. They started football like in 2006. ... I came down there helped him with offense. We wound up going to the playoffs, two years in a row, and we had a really good time. It was a great experience."

A Horatio native, Scott got his first taste of coaching a year after graduating high school. He chose to leave Southern Arkansas University after a year and volunteer coached under John Flaherty before eventually going to the University of Central Arkansas.

"Coach Flaherty called me and said, 'Where are you at? What are you doing now?'" Scott said. "And I told him, I was going to school there. ... He had a situation with a coach; had a medical issue, and he wanted to know if I could come help him. And so I rearranged my schedule with classes, and I'd go up there and afternoon and help coach Dardanelle, and I did that for like two years."

Scott said that for the first year, he plans to let coach Joseph Alderman continue to handle the offensive side of the game while he takes over the defense.

"I don't want to change things too much yet here," Scott said. "I'm sure eventually maybe, but the kids that are seniors now have been through this system, you know, as sophomores when they won the state championship, and then last year they lost in it. So they know the offensive system that they're doing now with coach Alderman; he does a fantastic job. So I'm gonna take over defensive role this year, and we'll kind of see how it goes from there."

Scott said that he will have 34-36 players on the high school team this year, which will give him plenty of options.

"We've got a couple of really good running backs," he said. "We've got two All-State running backs returning, and some pretty decent linemen. We've got bigger kids here than we had at Drew Central. ... I'm a firm believer that the best's gotta be on the field at all times, but when we can spell them and give them, you know, rests and stuff, we will definitely do so."

With a game that is offense-heavy, Scott said that he will be looking at a way to get stops while keeping things from getting too complicated.

"I like organization," he said. "I like discipline. And that is my number one goal is to get everybody on the same page with me. I like things a certain way. I like stuff to be clean. I like smooth transition from one thing to the next, and that is going to be the biggest thing for me is to get the kids in a system that they can learn that, you know, is not difficult, but it's easy to move from one thing to the next."

While Scott has never coached 8-man football before, he pointed out that "it's still football."

"A lot of people don't seem to understand that. It's still hitting. It's pads, helmets, shoulder (pads), and all that good stuff. And it's just a narrower field. It's just less people, and it's all narrower, but it's still running the ball, passing the ball. The same rules apply.

"And I kind of look forward to it. I think it's gonna be very interesting and pretty challenging. It's kind of an offensive game, in my opinion. Defense is the toughest part because you got to know exactly what you're doing, but I look forward to the challenge."