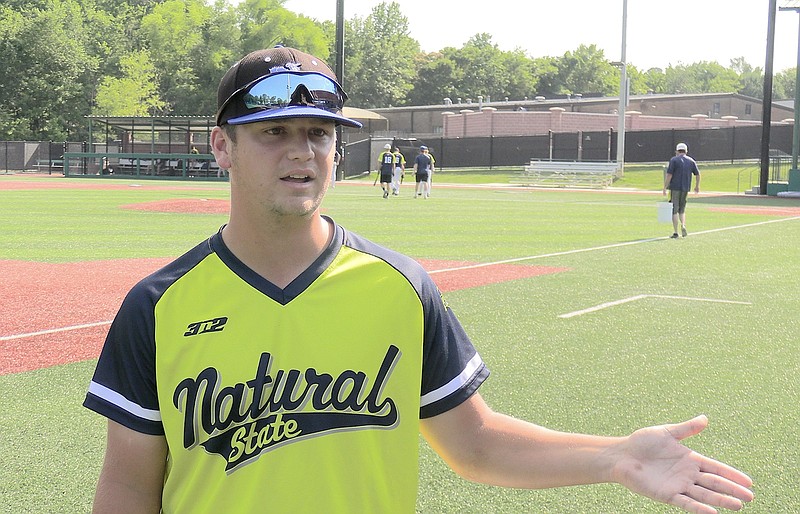 Natural State Collegiate League player and Lakeside graduate Brady Prince discusses why he chose to play in the inaugural season of the league this summer. - Photo by Donald Cross of The Sentinel-Record

The league played its All-Star game Wednesday night to mark the middle of the season, and Lakeside graduates Ethan Bates, Brady Prince and Ben Muldoon all took part in the contest.

The three friends decided to join the league to play high-level baseball during the summer just minutes from home with good friends.

"It really means a lot because there's never really been anything like this in Arkansas before, especially with the wood bat league and everything," Muldoon said. "I think it's cool to kind of get to do something a little different. Every year we get to play with metal bats during school, and this I think is just a cool way to kind of change things up a little bit."

The league's four teams compete in four-game series every weekend on Babe Ruth Field, and the playoffs for the league start July 9.

Not only are the three Lakeside graduates playing in their hometown, but they are playing in a new complex rich with baseball history.

"The history is insane," Muldoon said. "I grew up playing here whenever it was the Hot Springs Boys & Girls Club. I just think it's really cool to see how these fields got redone like this. Just to think on this exact field Babe Ruth was hitting home runs. It really means a lot to me. It really hits down deep."

Natural State Collegiate League owner Evan Hamm reached out to Prince about joining the league and being just 10 minutes from home with his friends joining too, Prince thought, "Why not?"

"It's fun just because family and friends are around here," Prince said. "You go off to college and no one really gets to see you all the time. You come back here and everybody's around and you play with your buddies again. It's just a lot more fun."

Muldoon highlighted a big reason he signed up for the league was to play with Prince and Bates, and the three former Rams were reunited on the diamond at Babe Ruth Field after playing for different collegiate teams.

"It's awesome," he said. "Man, it's really cool, too, because a lot of my buddies that I went to high school with, they went up to the U of A to Fayetteville to college and they never got to come watch me play down at Southern Arkansas. So it's pretty cool because I know some of them sometimes will come to games and they'll be in the stands cheering me on."

Bates said playing on the same field that the all-time greats played on means something to baseball players. He signed up for the league for a chance to play on the new fields at Majestic Park and said it is nice and easy to play there with the complex being just 10 minutes from home.

"It's just really awesome," Bates said. "You know growing up in high school all your family, friends get to come watch you. Then you go to college and nobody gets to come all the time. Then you come back here and you get to see everybody come and watch you play. The people that haven't got to watch you play in a while. So it really means a lot to be able to get family and friends back out here."

Hamm created the league so players from all over the state could work on their craft during the summer, and he said the league "couldn't have gone any better" through the halfway point.

Around 200 to 300 fans attend the games every weekend with some spectators even watching despite not having their own student-athlete on the field.

The league has been competitive so far. The Bootleggers lead the standings with a 7-5 record, closely followed by the Jockeys and Bathers at 6-6 in a tie for second. Despite being last in the standings, the Arlingtons are still in contention with a 5-7 league tally.

Players from all levels of college baseball signed up for the league from Division I to junior college players.

Prince said the level of play has been good, and although he has been happy with his own fielding performance, he noted he could do better on the hitting side of his game.

"I think it's pretty cool because different levels -- it doesn't matter," Prince said. "Everybody is kind of still on the same page. Everybody is playing the same baseball. So everybody kind of just gets along together and everybody wants the same thing. That's just to win."

Muldoon said the high level of play has improved him as an athlete and helped him hone his craft as a baseball player this summer.

Halfway through its inaugural season, the Natural State Collegiate League is going strong and providing players with a fun way to improve their game while in a homey atmosphere.

"I saw a guy the other day that was pitching in the Junior College World Series like two days before," Muldoon said. "It's pretty awesome. ... Usually, if I wouldn't have had this I would just be hitting baseballs off a tee or off soft toss or something like that. So coming out here getting to see live pitching and have live play is a big deal."