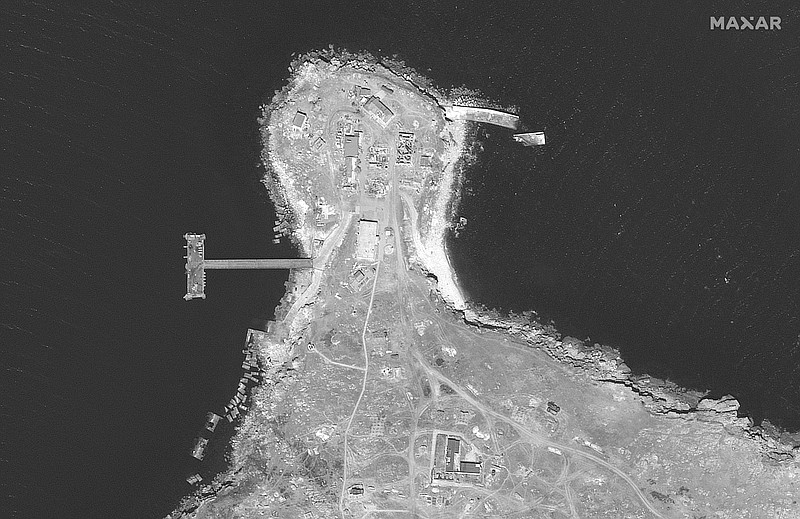 KYIV, Ukraine -- A Ukrainian official overseeing the country's push to join the European Union said Wednesday that she's "100%" certain all 27 EU nations will approve Ukraine's EU candidacy during a summit this week.

In an interview with The Associated Press, Deputy Prime Minister for European and Euro-Atlantic Integration Olha Stefanishyna said the decision could come as soon as Thursday, when the leaders' summit starts.

Stefanishyna said the Netherlands, Sweden and Denmark had been skeptical about starting accession talks with Ukraine while it is fighting Russia's invasion but are now supportive. Asked how confident she was that Ukraine would be accepted as an EU candidate, she said: "The day before the summit starts, I can say 100%."

The EU's executive arm threw its weight behind Ukraine's candidacy last week. Stefanishyna described the European Commission's endorsement as "a game-changer" that had taken the ground out from under "the legs of those most hesitating."

EU candidate status, which can be granted only if the existing member countries agree unanimously, is the first step toward membership. It does not provide any security guarantees or an automatic right to join the bloc.

Ukraine's full membership will depend on whether the war-torn country can satisfy political and economic conditions. Potential newcomers need to demonstrate that they meet standards on democratic principles and must absorb 80,000 pages of rules covering everything from trade and immigration to fertilizers and the rule of law.

Stefanishyna told the AP that she think Ukraine could be an EU member within years, not the decades that some European officials have forecast.

"We're already very much integrated in the European Union," she said. "We want to be a strong and competitive member state, so it may take from two to 10 years."

To help candidates, the bloc can provide technical and financial assistance. European officials have said that Ukraine has already implemented about 70% of the EU rules, norms and standards, but have also pointed to corruption and the need for deep political and economic reforms.

In a virtual talk to Canadian university students on Wednesday, Zelenskyy described the Brussels summit as "two decisive days" that he, like Stefanishyna, thinks will result in approval of Ukraine's EU candidacy.

"That is a very crucial moment for us, for some people in my team are saying this is like going into the light from the darkness," the Ukrainian president said through an interpreter. "In terms of our army and society, this is a big motivator, a big motivational factor for the unity and victory of the Ukrainian people."

Belgian Prime Minister Alexander De Croo said he spoke with Zelenskyy on Wednesday and guaranteed him that Belgium would support Ukraine's candidate status.

"Considerable efforts will be needed, especially in the fight against corruption and the establishment of an effective rule of law," De Cross said. "But I am convinced that it is precisely the (post-war) reconstruction of Ukraine that will provide opportunities to take important steps forward."

Zelenskyy said he spoke with a total of 11 EU leaders Wednesday, following calls with nine the day before, in another indication of how important EU candidacy is for Ukraine.

-- Press freedom group Reporters Without Borders said a Ukrainian photojournalist and a soldier accompanying him appear to have been "coldly executed" during the first weeks of the war as they searched in Russian-occupied woods for a missing camera drone. The group sent investigators to the woods north of the capital, Kyiv, where the bodies of Maks Levin and serviceman Oleksiy Chernyshov were found April 1. The group said its team counted 14 bullet holes in the burned hulk of their car and found litter seemingly left by Russian soldiers.

-- Zelenskyy said Russian forces were carrying out very heavy air and artillery strikes in the eastern Donbas. "Step by step they want to destroy all of the Donbas. All of it," he said in his nightly video address. Ukrainian Defense Ministry spokesman Oleksandr Motuzianyk said in some battles, for every artillery shell Ukrainian forces fire, the Russian army fires at least six. Zelenskyy appealed to Western countries to speed up deliveries of heavy weapons "to stop this diabolical armada."

-- Russian forces captured three villages in the Luhansk region, one of two that make up the Donbas, Gov. Serhiy Haidai told The Associated Press on Wednesday. He said the villages are near Lysychansk, the last city in Luhansk still fully under Ukrainian control. The Russians have also taken a strategic coal village, Toshkivka, enabling them to intensify attacks, Haidai said.

-- The Russian Defense Ministry said Wednesday that Russian forces killed up to 500 Ukrainian servicemen in strikes Tuesday against a shipbuilding plant in Mykolaiv. Zelenskyy said the Russians fired seven missiles at Mykolaiv, wounding five people. He gave no details about what was hit. The Russian military also claimed Ukrainian forces evacuated up to 30 wounded and eight dead American and British fighters from near Mykolaivka, a town in the Donetsk region. There was no confirmation of this by Ukraine. 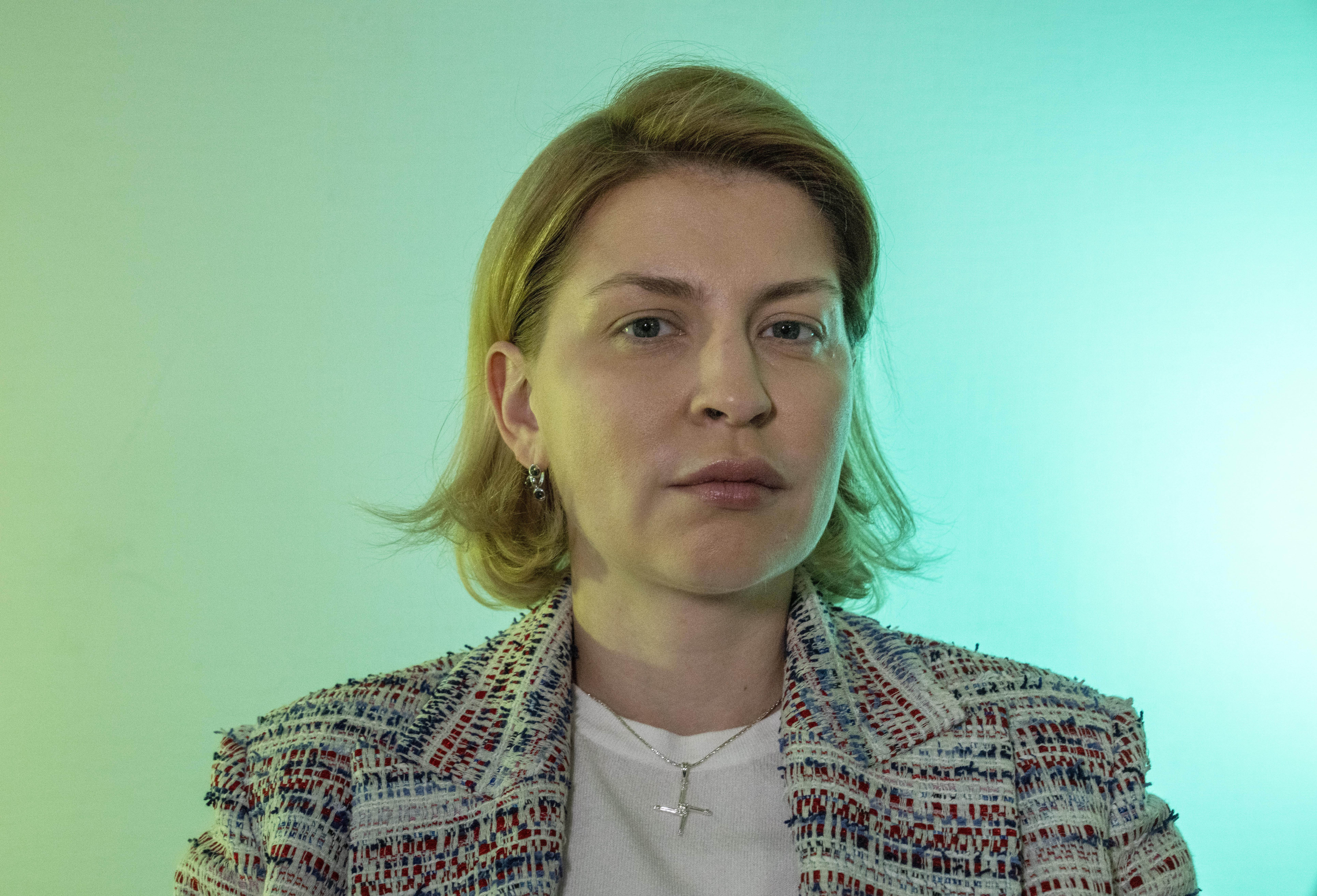 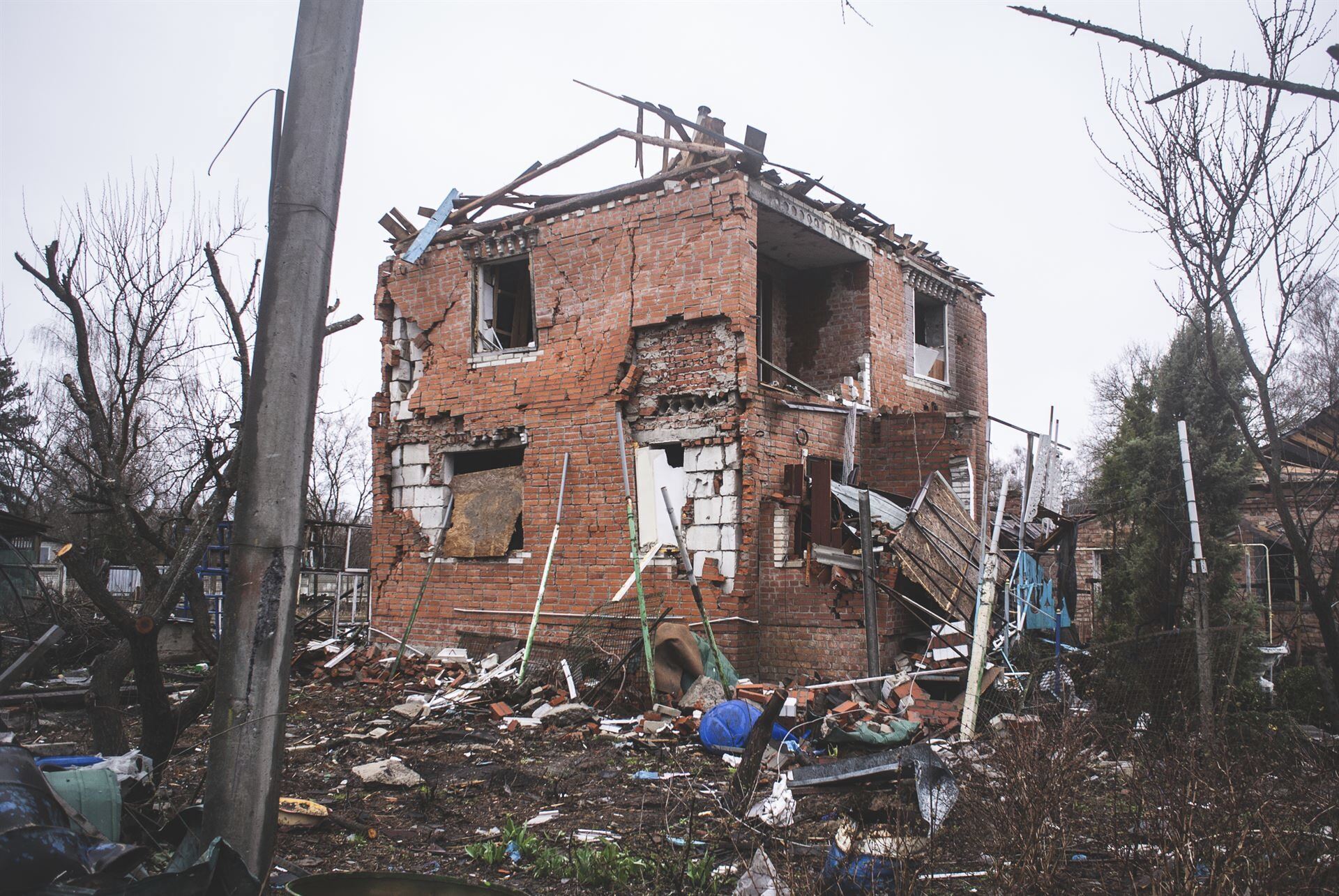 This photo posted by Cukr magazine on April 19, 2022 shows the wreckage of a home after shelling in the town of Klymentove, Sumy, Ukraine. (Cukr via AP) 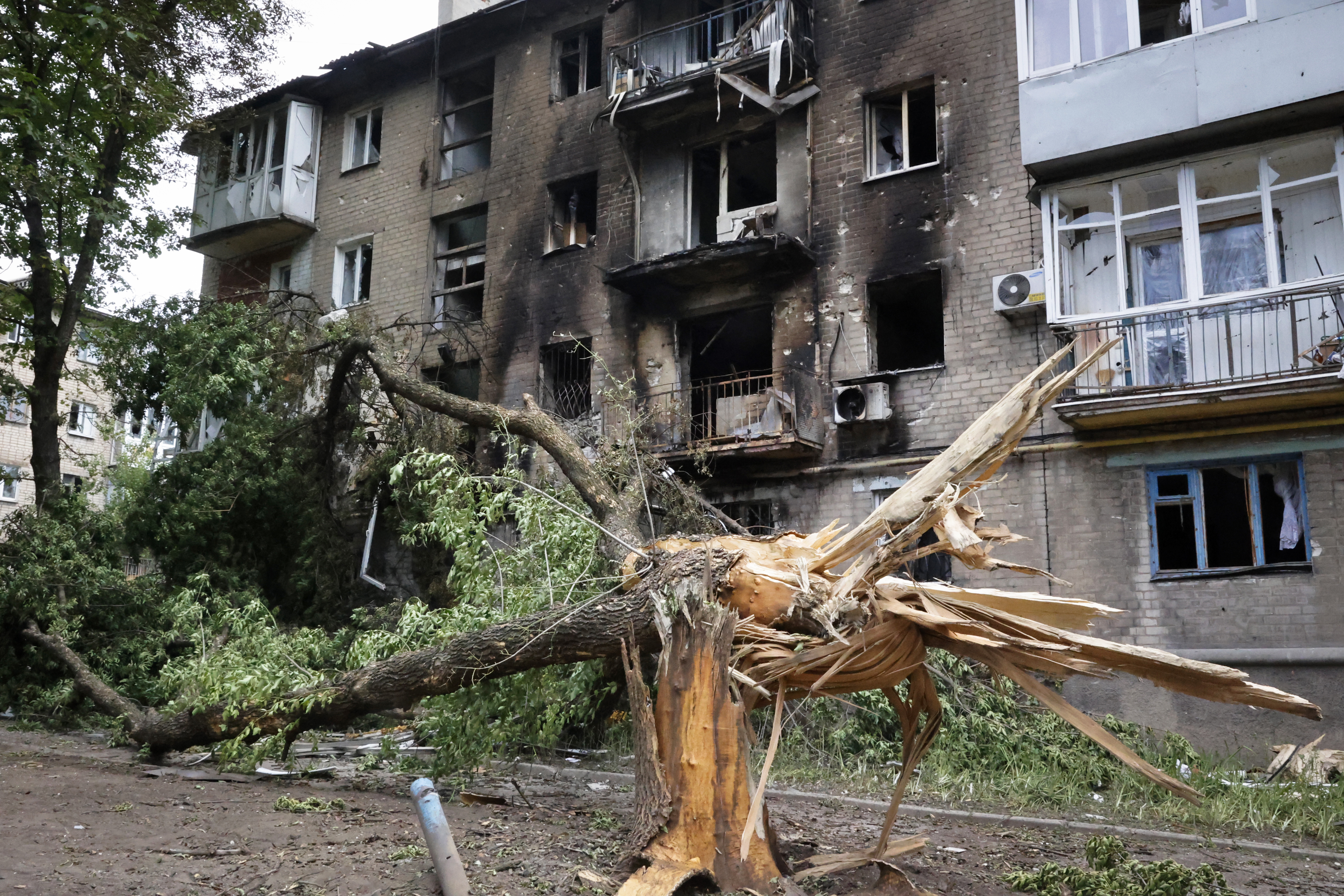 A view of an apartment building damaged during shelling in Donetsk, in territory under the government of the Donetsk People's Republic, eastern Ukraine, Wednesday, June 22, 2022. (AP Photo/Alexei Alexandrov) 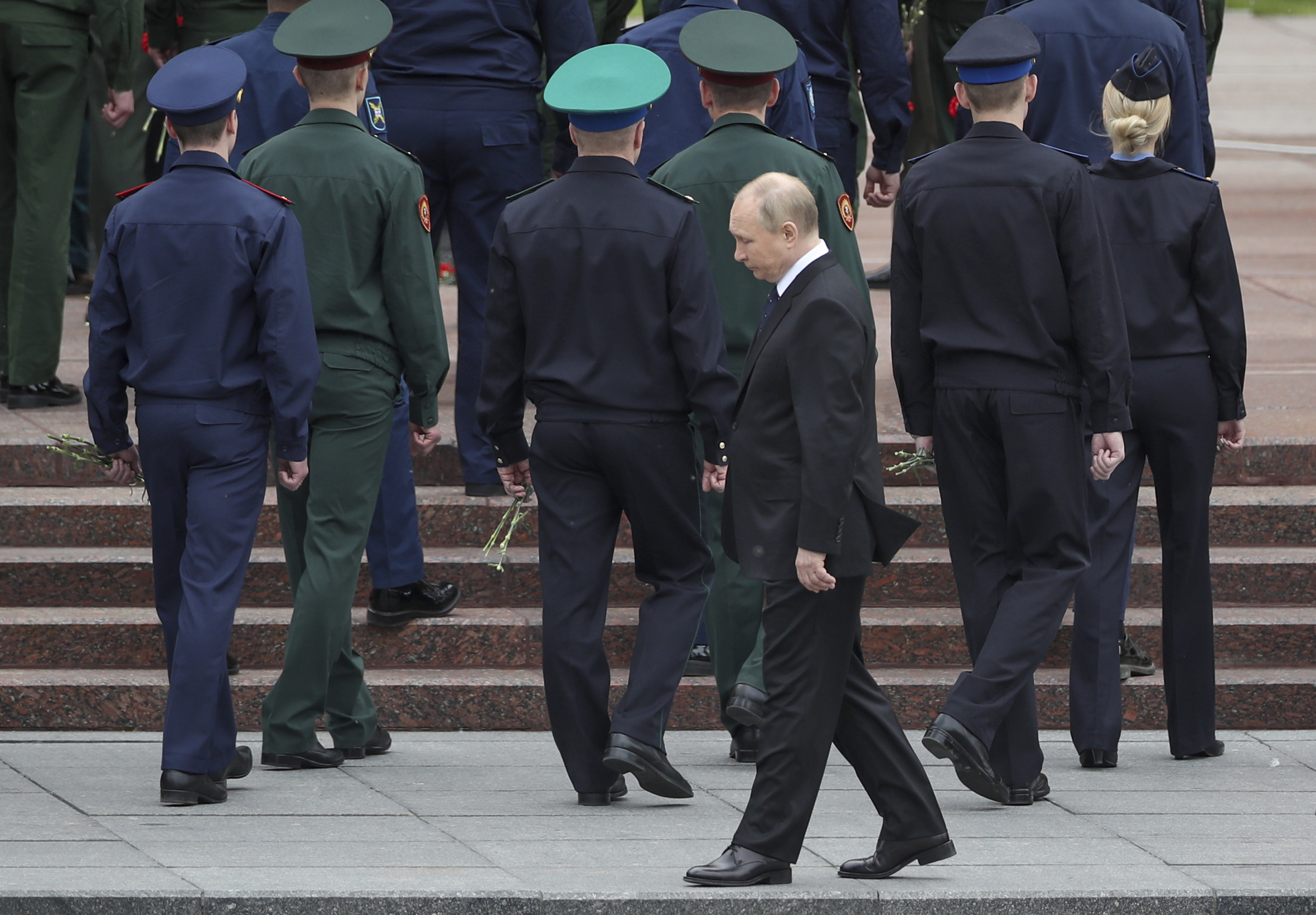 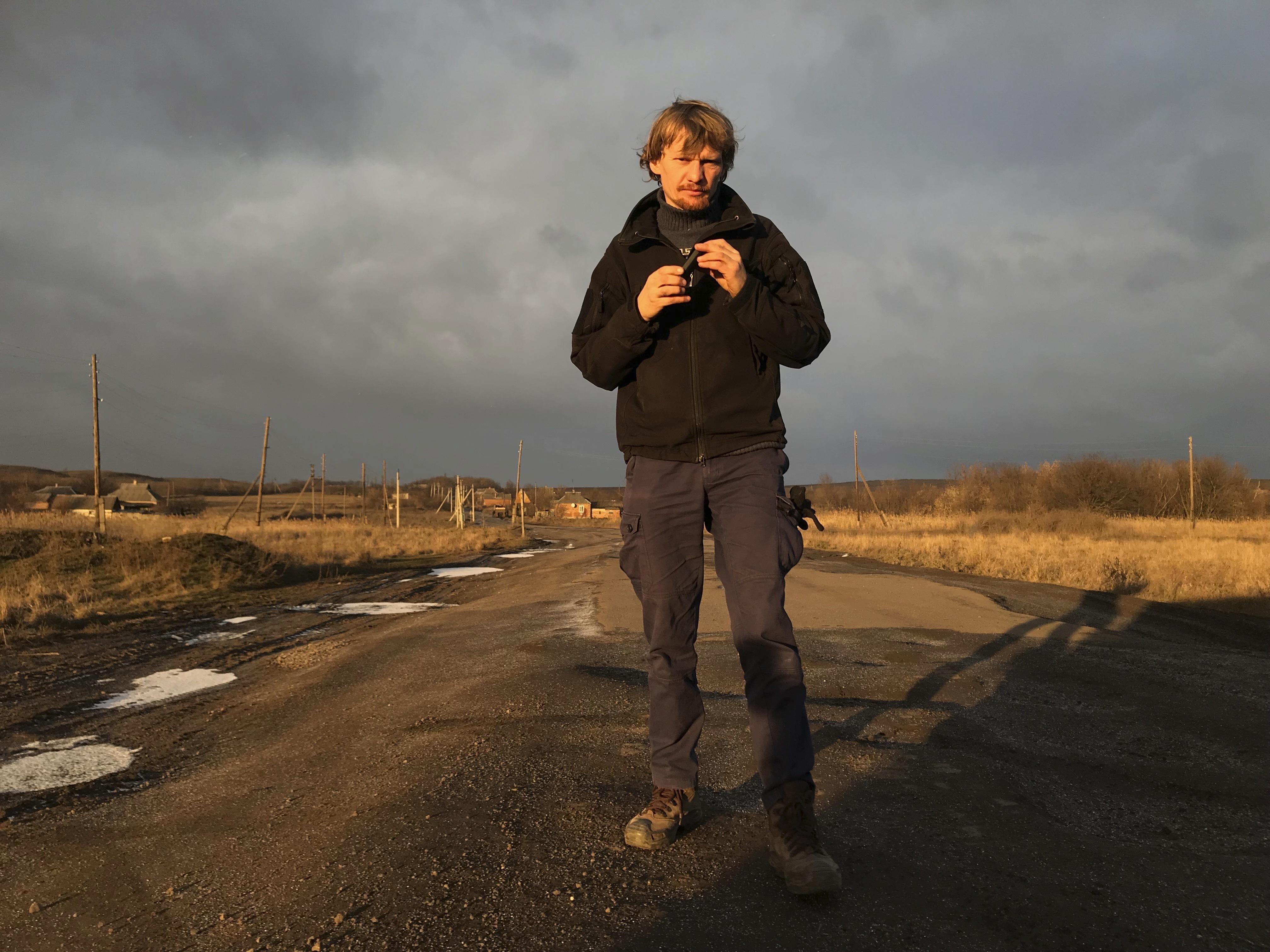 FILE - Ukrainian photojournalist Maks Levin poses for a photo in the Donetsk region in Ukraine on Jan. 12, 2018. The press freedom group Reporters Without Borders says it believes that Levin and a soldier who was accompanying him were "coldly executed" in Russian-occupied woodlands in the first weeks of the war in Ukraine. The bodies of Maks Levin and serviceman Oleksiy Chernyshov were found April 1 in woods north of the capital, Kyiv. (AP Photo/Inna Varenytsia) 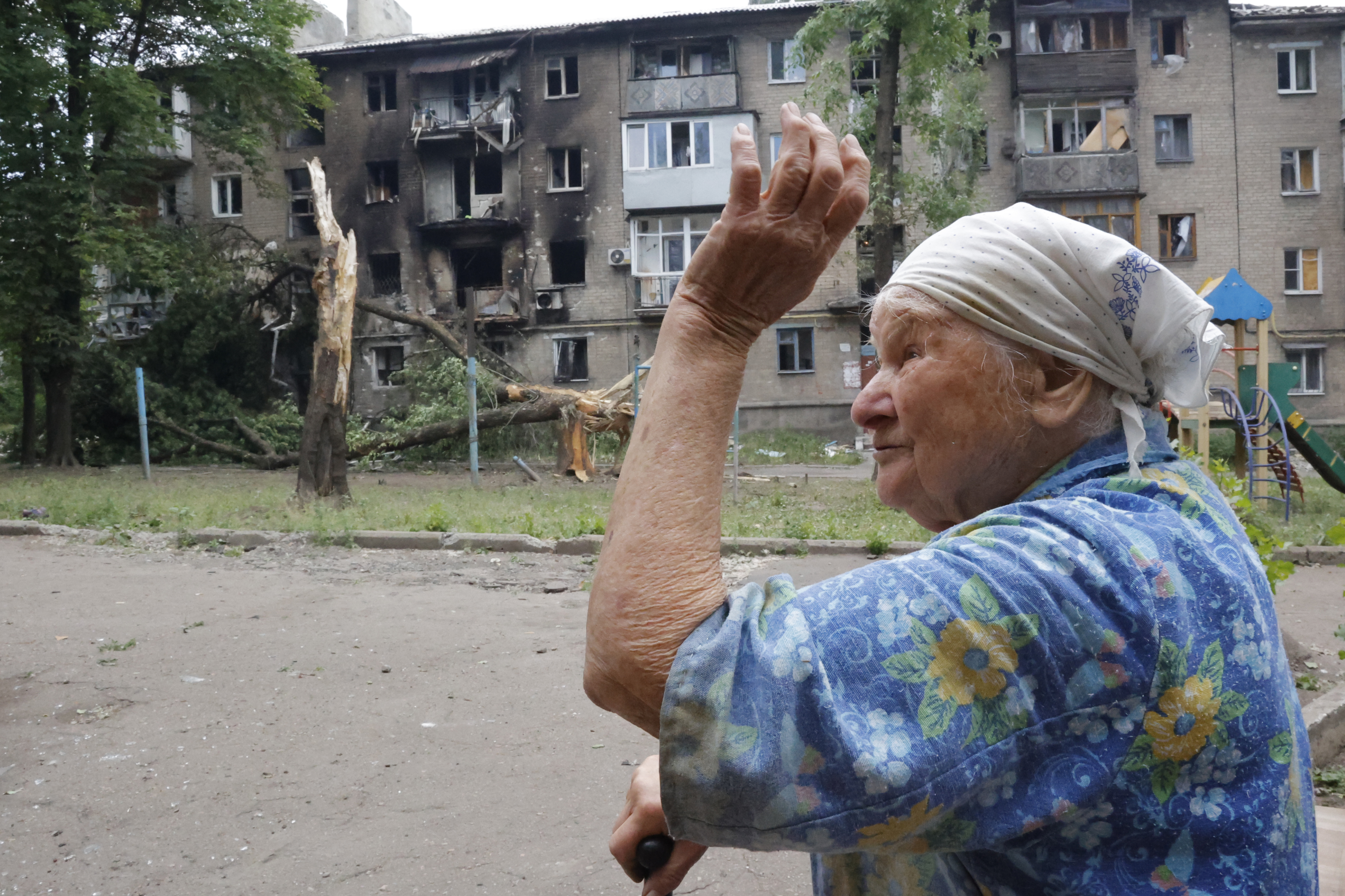 A woman gestures near an apartment building damaged during shelling in Donetsk, in territory under the government of the Donetsk People's Republic, eastern Ukraine, Wednesday, June 22, 2022. (AP Photo/Alexei Alexandrov) 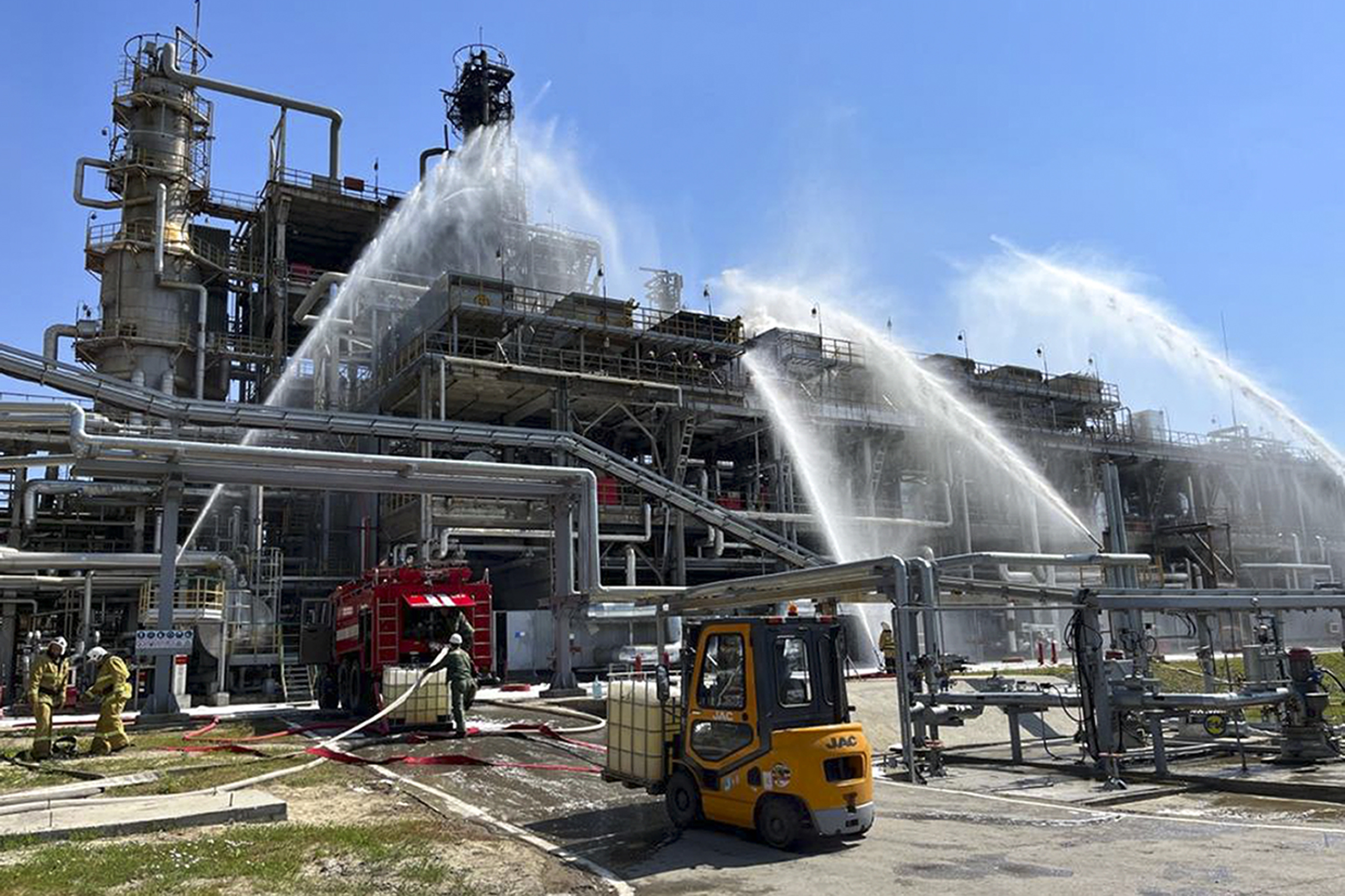 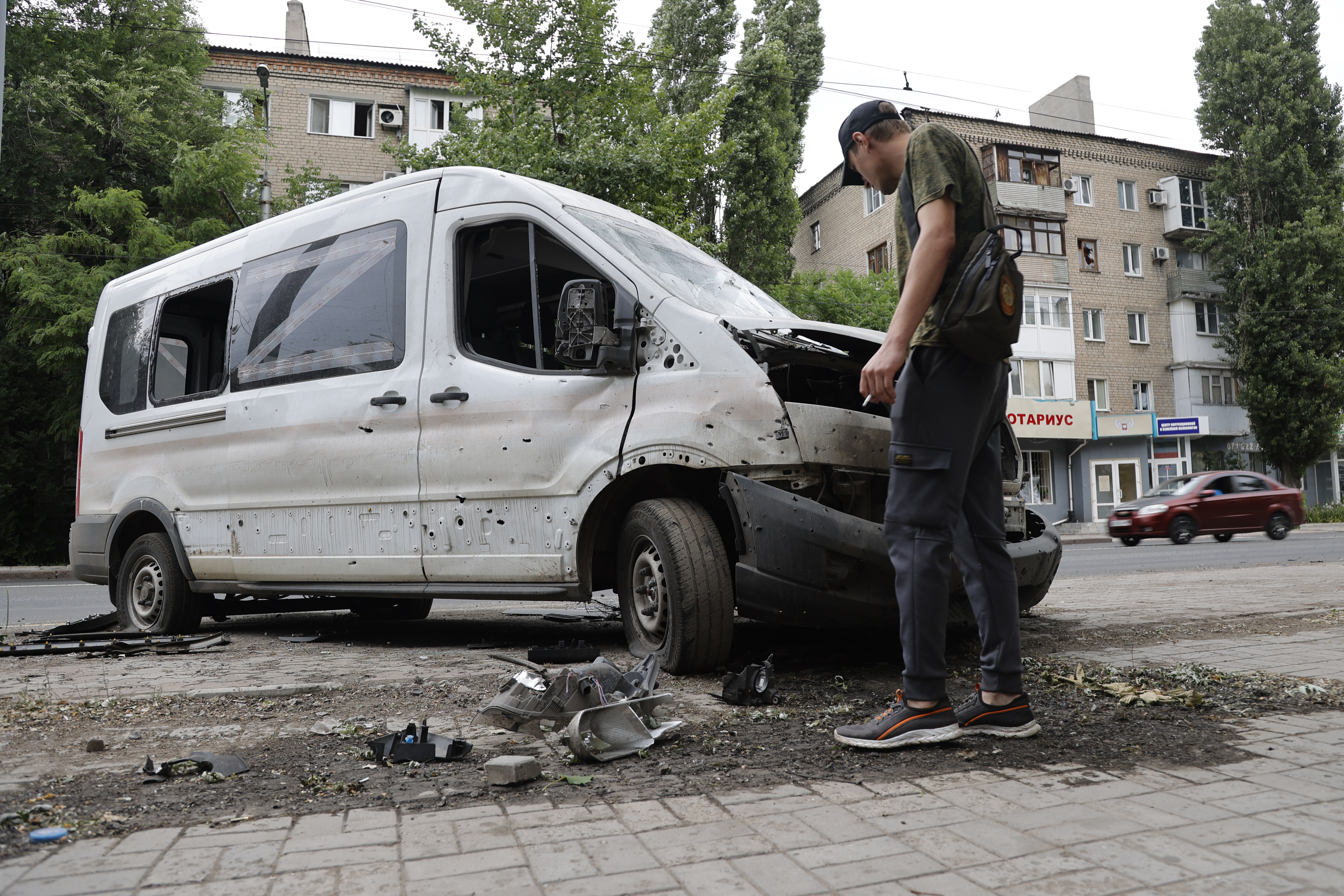 A man inspects a car damaged during shelling in Donetsk, in territory under the government of the Donetsk People's Republic, eastern Ukraine, Wednesday, June 22, 2022. (AP Photo/Alexei Alexandrov) 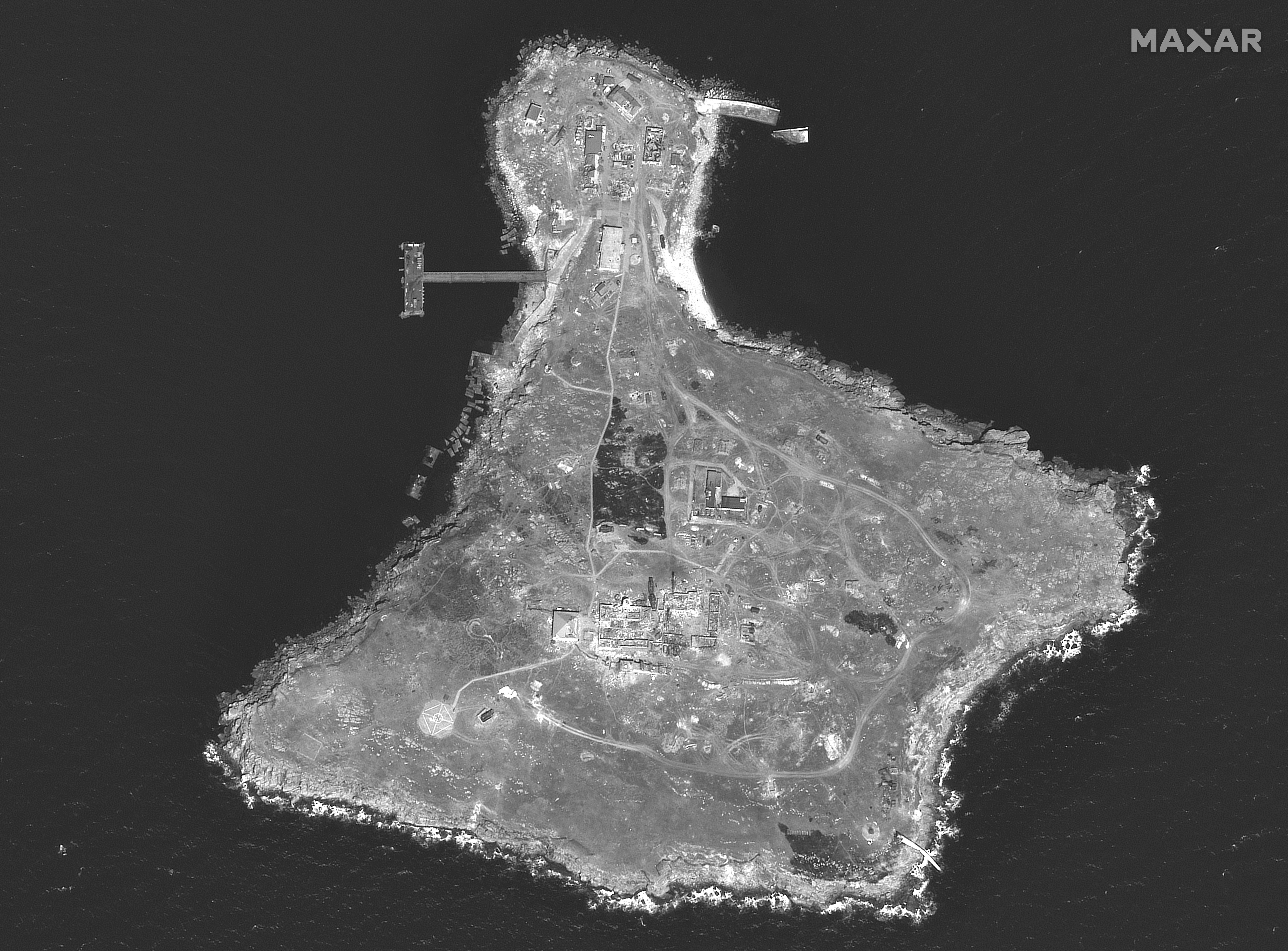 This WorldView-1 satellite black and white image from Maxar Technologies shows an overview of Snake Island, in the Black Sea, on Tuesday, June 21, 2022. There is damage to the tower on the southern end of the island and burned vegetation in several locations. (Satellite image ©2022 Maxar Technologies via AP)