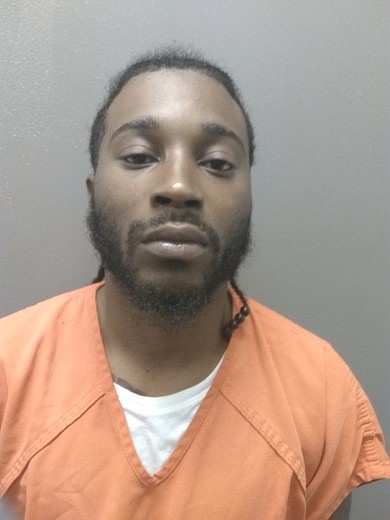 A Little Rock parolee was arrested on multiple charges Thursday night after allegedly fleeing a traffic stop by a Garland County sheriff's deputy, prompting a high-speed pursuit that ended when he crashed into the side of a Hot Springs motel.

Howze was also charged with misdemeanor counts of reckless driving and driving on a suspended driver's license and was cited for speeding, driving left of center and improper passing. He was being held on a zero bond and was set to appear Friday in Garland County District Court. According to court records, he was convicted on multiple felony drug charges in 2014 in Pulaski County and is on parole. He also has drug charges pending in Pulaski County from a May 24, 2021, arrest.

According to the probable cause affidavit, shortly after 6:30 p.m. Thursday, sheriff's Deputy Eduardo Grajeda made a traffic stop on a silver Pontiac Grand Prix in the 6000 block of East Grand Avenue after a computer check showed the registered owner had a suspended driver's license.

He made contact with the driver, identified as Howze, who didn't have a driver's license or any other form of ID, but reportedly gave Grajeda his name and date of birth. Grajeda started to walk back to his unit to run Howze's information when Howze allegedly sped off in his vehicle, headed west on Grand.

During the pursuit, Howze allegedly reached speeds up to 115 mph and was "traveling in and out of traffic," crossing into the oncoming lane multiple times despite the numerous other vehicles on the roadway.

The pursuit approached Belmar Street where Howze reportedly lost control of the vehicle and "slammed into" the Rodeway Inn, 1045 E. Grand, where he was taken into custody.

Howze had a small cut on his right arm, but was checked by LifeNet at the scene and cleared. It was noted the vehicle sustained heavy damage on the front end and the motel sustained approximately $20,000 in damages on the east side of the building.

In searching Howze, deputies allegedly found he had $1,090 in cash in his shorts pocket. When asked why he fled, Howze reportedly stated because he had marijuana and a gun in the vehicle.

In searching the vehicle, deputies found a loaded Glock 9-mm with a 17-round magazine which was determined to have been reported stolen out of Sheridan.

In the passenger front seat, they found a backpack that allegedly contained multiple bags of marijuana, including five smaller baggies and one larger bag, for a total of 795.6 grams or 1.7 pounds. The backpack also contained digital scales and a box of empty baggies.

The affidavit noted Howze's prior felony convictions and the fact he was on parole. Agents with the 18th Judicial District East Drug Task Force were notified and responded to the Garland County Detention Center to assist with the case.