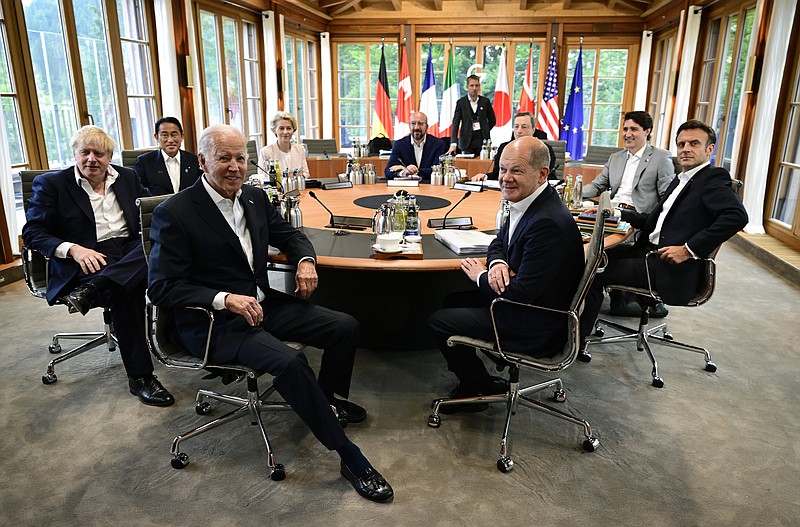 ELMAU, Germany -- Leaders of the world's biggest developed economies said Tuesday they would explore far-reaching steps to cap Russia's income from oil sales that are financing its invasion of Ukraine and struck a united stance to support Kyiv for "as long as it takes" as the war grinds on.

The final statement from the Group of Seven summit in Germany underlined their intent to impose "severe and immediate economic costs" on Russia.

It left out key details on how fossil fuel price caps would work in practice, setting up more discussion in the weeks ahead to "explore ... the feasibility" of measures to bar imports of Russian oil above a certain level.

That would hit a key Russian source of income and, in theory, help relieve the energy price spikes and inflation afflicting the global economy as a result of the war.

"We remain steadfast in our commitment to our unprecedented coordination on sanctions for as long as necessary, acting in unison at every stage," the leaders said.

The G-7 leaders -- representing the U.S., Germany, France, Italy, the U.K., Canada and Japan -- on Monday pledged to support Ukraine "for as long as it takes" after conferring by video link with Ukrainian President Volodymyr Zelenskyy.

Zelenskyy has openly worried that the West has become fatigued by the cost of a war that is contributing to soaring energy costs and price hikes on essential goods around the globe. The G-7 has sought to assuage those concerns.

Leaders also agreed on a ban on imports of Russian gold and to step up aid to countries hit with food shortages by the blockade on Ukraine grain shipments through the Black Sea.

"We agree that (Russian) President (Vladimir) Putin must not win this war, and we will continue to keep up and drive higher the economic and political costs for President Putin and his regime," said the summit host, German Chancellor Olaf Scholz.

"For that, it is important to stand together -- including in the long haul that we certainly still face."

French President Emmanuel Macron said Russia "cannot and should not win" the war in Ukraine -- as its terrible toll was on full view the day after a Russian missile strike hit a shopping mall in the town of Kremenchuk, killing 18 people.

The price cap -- pushed by U.S. President Joe Biden -- would in theory work by barring service provides such as shippers or insurers from dealing with oil priced above a fixed level. That could work because the service providers are mostly located in the European Union or the U.K. and thus within reach of sanctions. To be effective, however, it would have to involve as many consuming countries as possible, in particular India, where refiners have been snapping up cheap Russian oil shunned by Western traders. Details on how the proposal would be implemented were left for continuing talks in coming weeks.

The U.S. has already blocked Russian oil imports, which were small in any case. The European Union has decided to impose a ban on the 90% of Russian oil that comes by sea, but the ban does not take effect until the end of the year, meaning Europe continues to send money to Russia for energy even while condemning the war. Meanwhile, higher global oil prices have softened the blow to Russia's income, even as Western traders shun Russian oil.

Energy themes were front and center at the summit throughout. Europe is scrambling to find new sources of oil and fresh supplies of gas as Russia dials back gas supplies in what leaders say is a political move. Meanwhile high energy prices are a headache for G-7 countries' consumers.

The group showed wide-ranging concern about China. The leaders stressed that it is "necessary to cooperate with China on shared global challenges" but underlined their stance that China should urge Russia to halt the war, respect human rights in Hong Kong, refrain from military action against Taiwan, and improve its non-transparent trade and economic practices.

From the secluded Schloss Elmau hotel in the Bavarian Alps, the G-7 leaders will move to Madrid for a summit of NATO leaders, where fallout from Russia's invasion of Ukraine will again dominate the agenda. All G-7 members other than Japan are NATO members, and Japanese Prime Minister Fumio Kishida has been invited to Madrid.

While the group's annual gathering has been dominated by the war, Scholz has been keen to show that the G-7 also can move ahead on pre-war priorities.

The move, championed by Scholz, will see countries that join the club agree on tougher measures to reduce greenhouse gas emissions with the aim of keeping global temperatures from rising more than 1.5 Celsius (2.7 Fahrenheit) this century compared with pre-industrial times.

Countries that are part of the club will try to harmonize their measures in such a way that they are comparable and avoid members imposing climate-related tariffs on each others' imports.

Scholz said the aim was to "ensure that protecting the climate is a competitive advantage, not a disadvantage."

He said details of the planned climate club would be finalized this year. 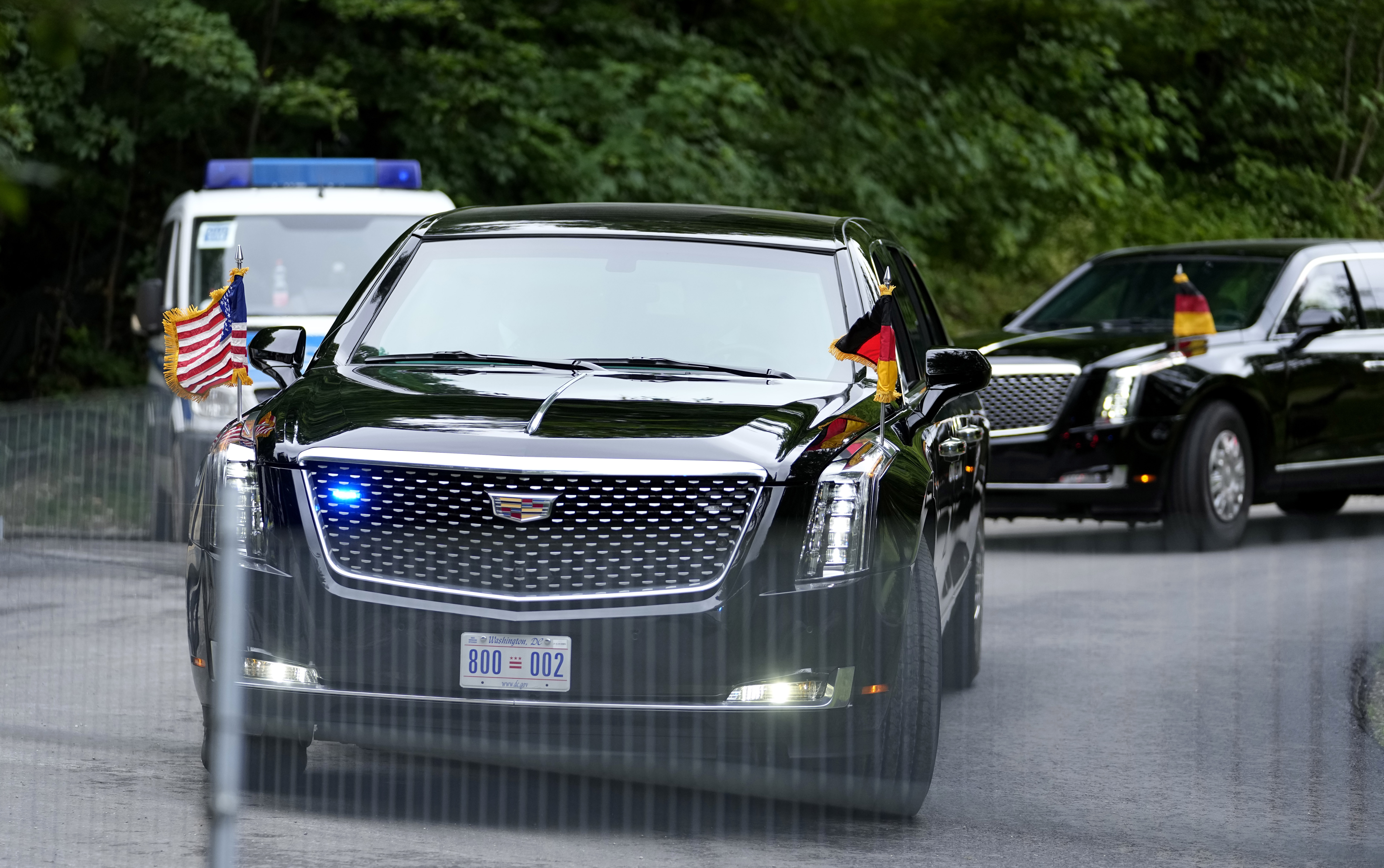 The motorcade of U.S. President Joe Biden drives near the G7 venue at Castle Elmau in Kruen, near Garmisch-Partenkirchen, Germany, on Tuesday, June 28, 2022. The Group of Seven leading economic powers are finishing their annual gathering on Tuesday. (AP Photo/Martin Meissner) 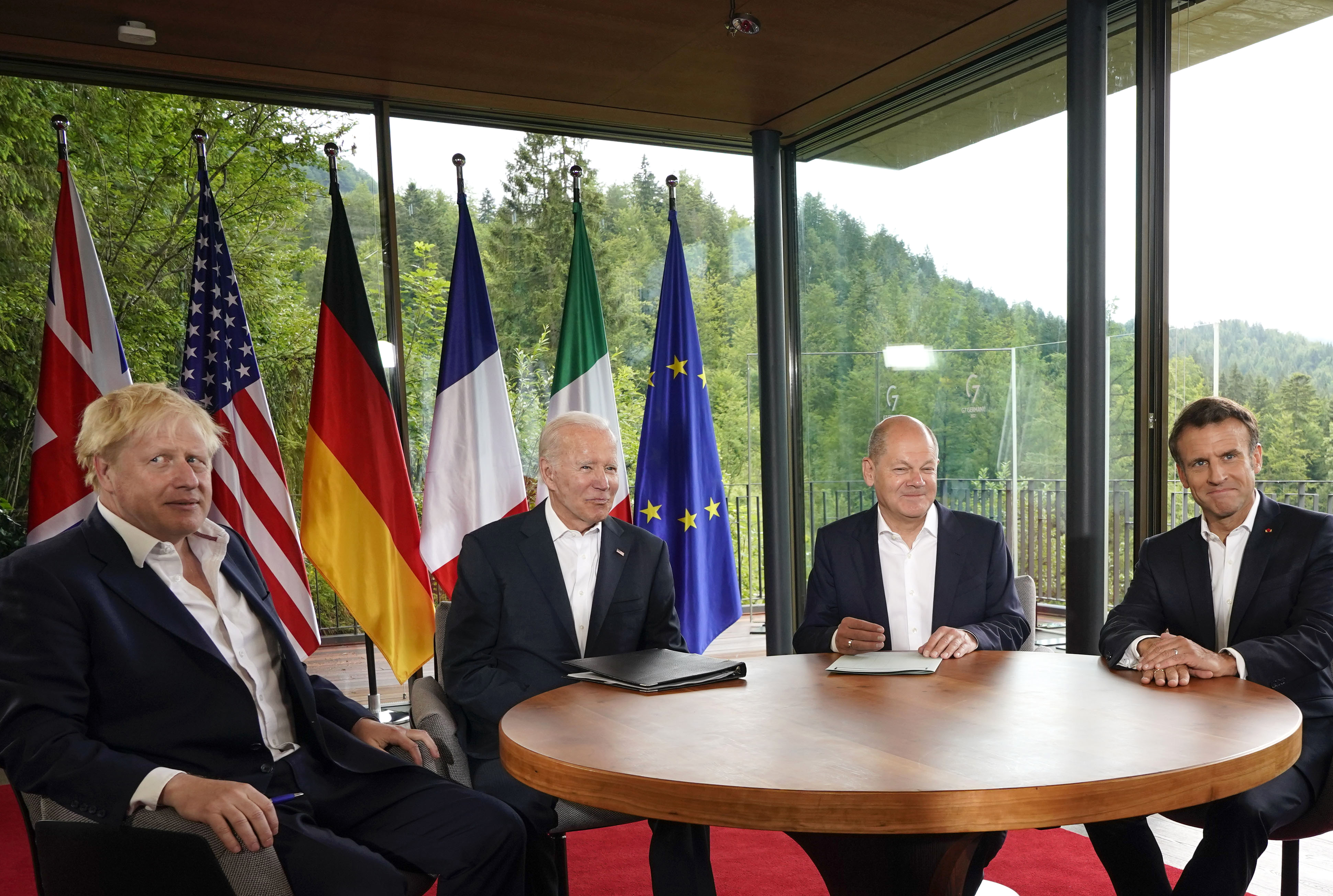 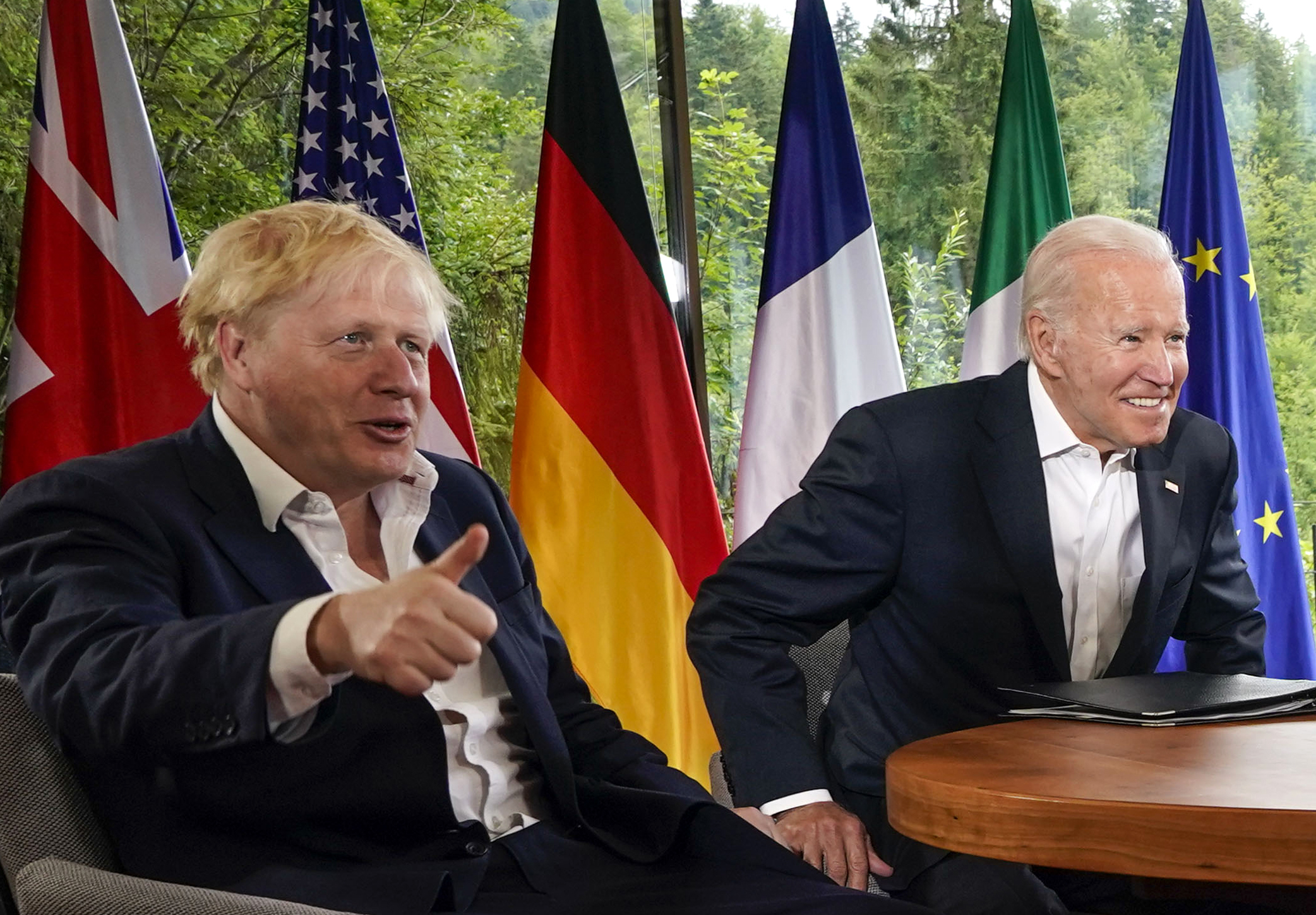 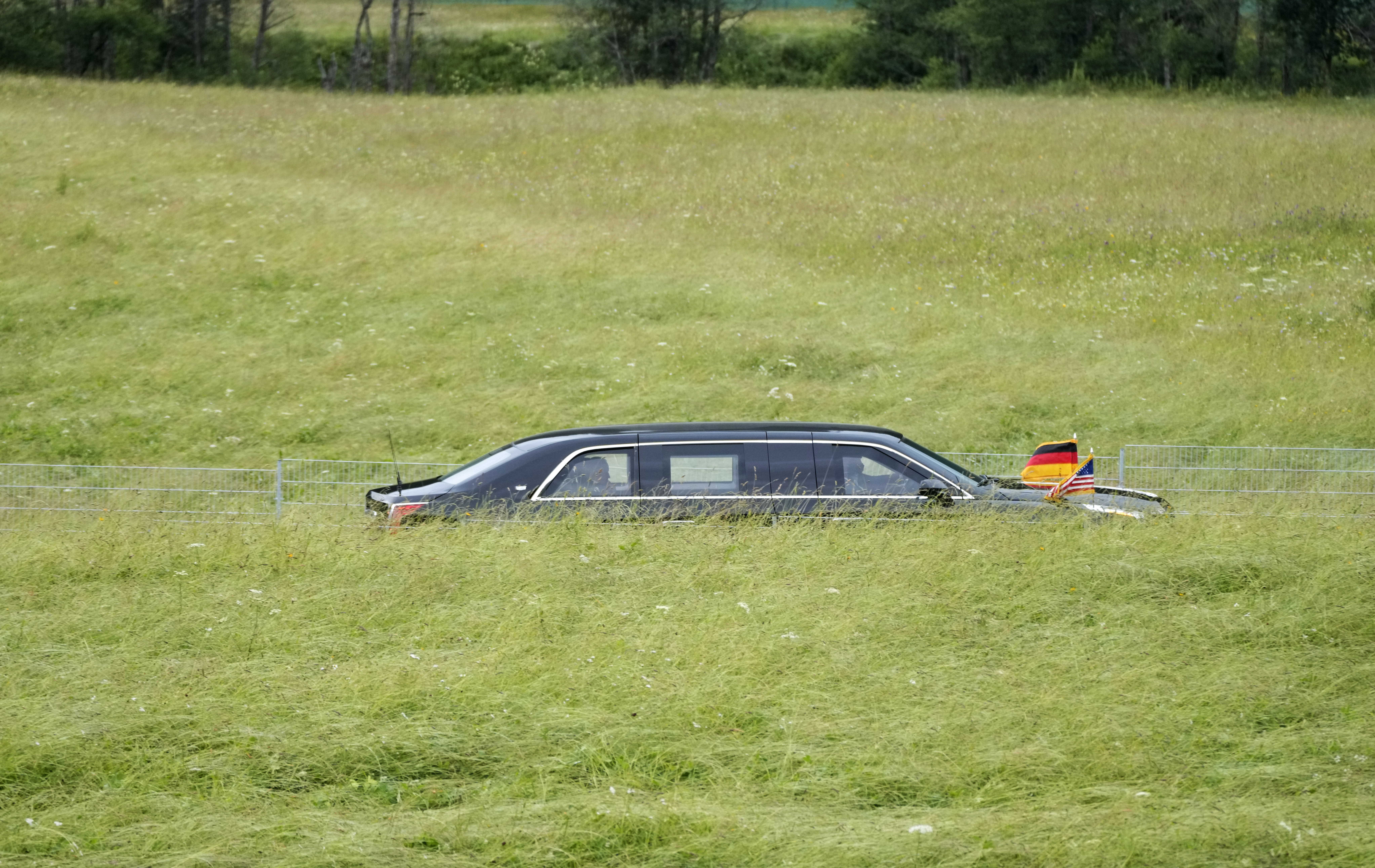 The car of U.S. President Joe Biden drives near the G7 venue at Castle Elmau in Kruen, near Garmisch-Partenkirchen, Germany, on Tuesday, June 28, 2022. The Group of Seven leading economic powers are finishing their annual gathering on Tuesday. (AP Photo/Markus Schreiber) 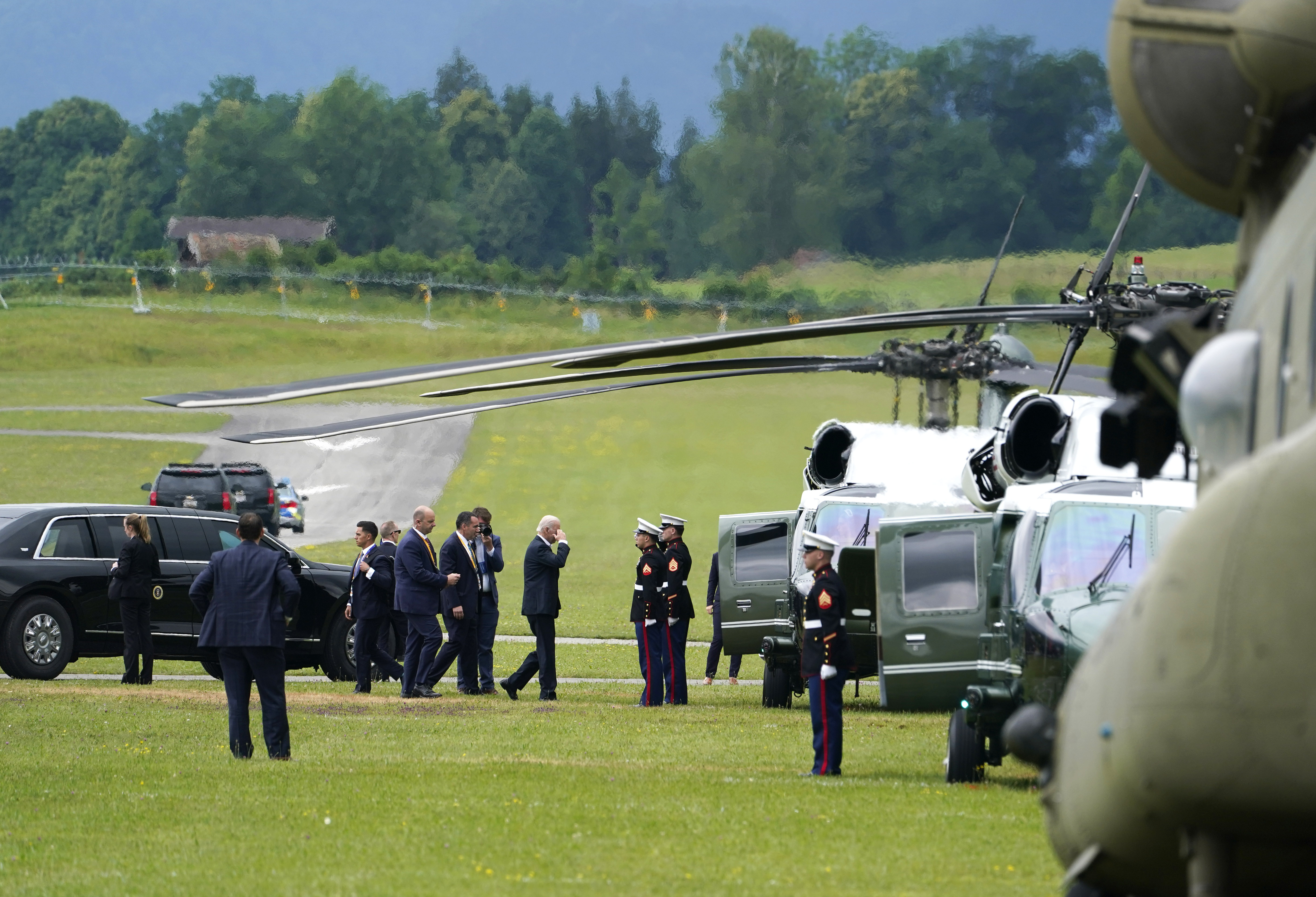 U.S. President Joe Biden, center, salutes as he prepares to board Marine One at a landing zone near Ohlstadt, Germany, Tuesday, June 28, 2022, after attending the Group of Seven meeting at the Schloss Elmau hotel in Elmau, Germany. (AP Photo/Susan Walsh) 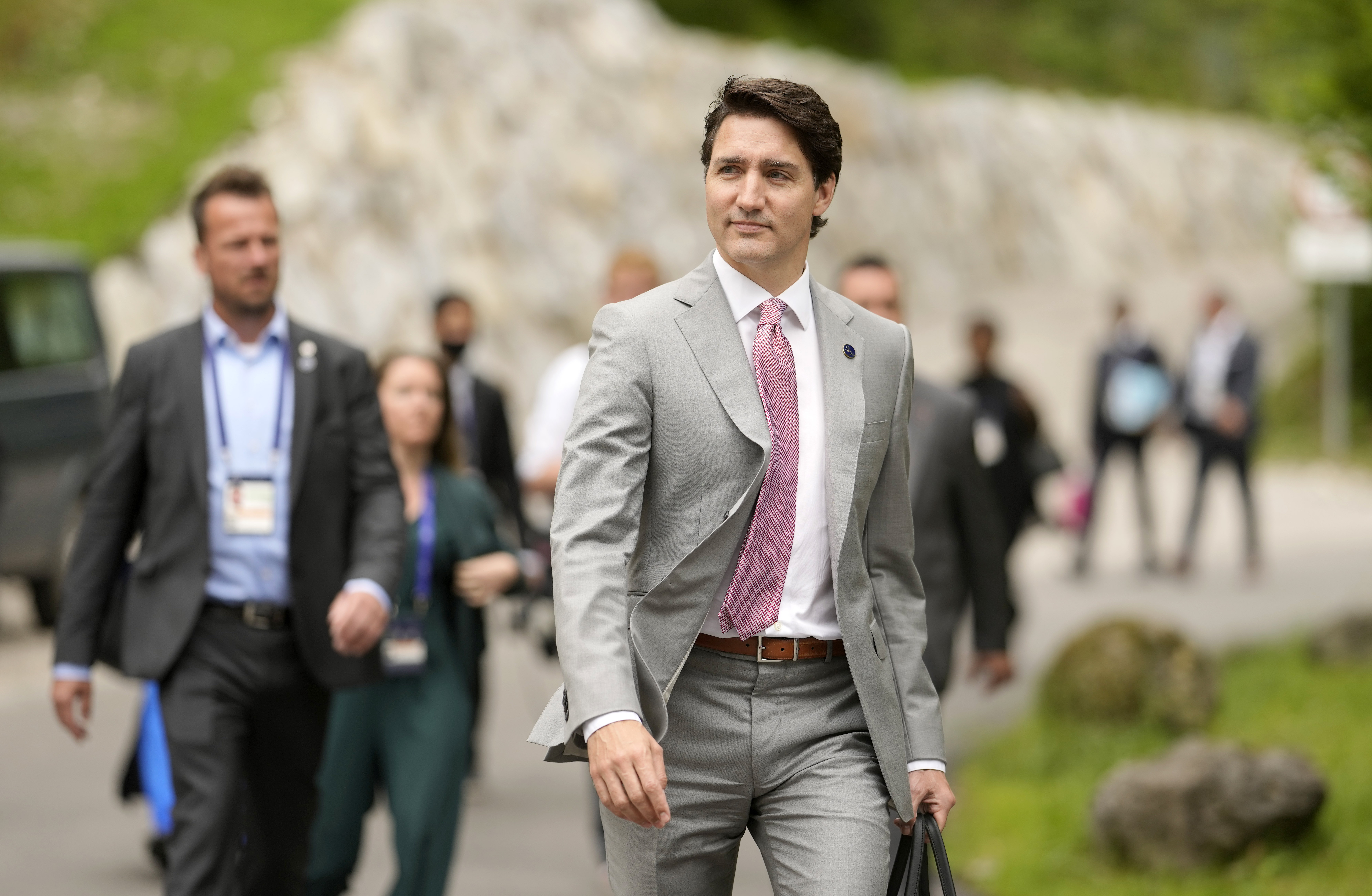