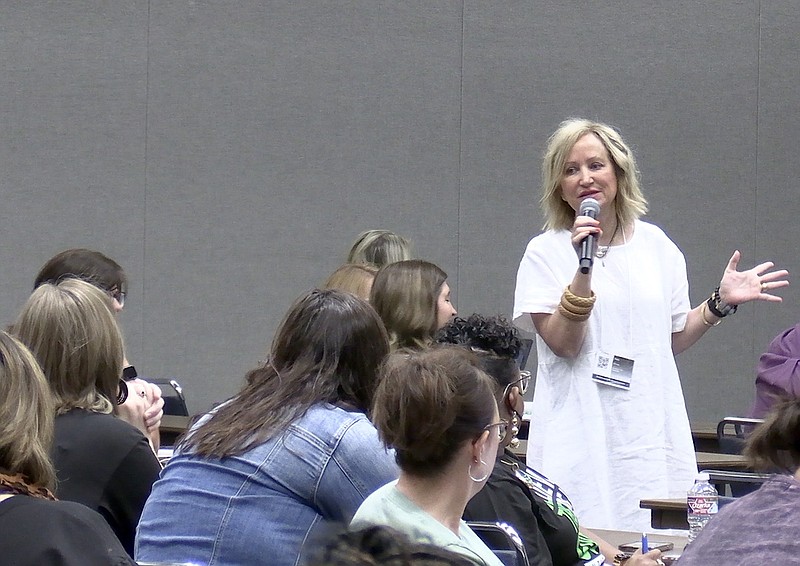 Dixon, who serves as ATU's program director, told the audience of secondary and postsecondary counselors gathered at the Hot Springs Convention Center they have probably used expressive arts therapy before and song lyrics are a huge component of it.

She quoted from Barbara Gross Davis's book "Tools for Teaching," stating, "Music creates powerful connections between people as it provides the means to communicate, entertain, remember, mourn, or celebrate the lives of people."

"We're going to look at our objective, which is to gain knowledge on how to use songs and song lyrics to increase morale and positivity in schools," Dixon said. "Hopefully after this session there'll be something you can think upon and add to your curriculum."

She said such therapy has been around a long time and can be used in all types of counseling, in groups, individually or even in professional development with teachers. While it cannot be forced upon people, if planned out, it can be very useful for faculty group meetings as well.

"There's a lot of research out there that group counseling works well with students who maybe are feeling down or students who need to make connections. And, gosh, think about the connections you could make with the students if you allow them to share songs with you. So maybe your directive is, 'Could you bring in a song that is particularly meaningful to you and share it with the group?'" she said.

The number one directive of school counselors is to build relationships, she said, and not only is it a great tool to do that, it extends across all cultures.

"What I might bring, as a student, to the group might look different than what someone else might bring," she said. "And that's OK because we can talk about that. In particular, maybe you can use it when students are feeling down; Maybe they're experiencing grief; They, maybe, just need some inspiration."

Dixon played the song "Ac-Cent-Tchu-Ate the Positive," a 1944 tune by Harold Arlen and Johnny Mercer written during World War I. As the title of her lecture, she noted, "That would make sense that they would try to try to accentuate the positive, right?"

"That would be a cool thing that you could do as a school counselor with the teachers to talk about the song lyrics from a historical perspective. What literature was being written during that time? You could have the English teacher in there. Gosh, that would be so cool. I know as a school counselor, you don't have a lot of time, but you should make time for cool things like this," she said.

She offered up some ideas on how to incorporate music into schools such as having a poster contest, a song club or inspirational songs played during lunch, noting these are things they should be doing.

"These are things we should add to our toolbox," she said. "This would put us in direct service of the students. If I walked in your school and I said, 'Who's your school counselor?' and they didn't know, man, I'd be disappointed. But if they said, 'Oh, it's Ms. Julie and we do some really cool things with her.' You don't need additional training for this so why not do it? Why not use song or song lyrics in your practice?"

She went on to play clips of songs throughout the decades that contained especially uplifting or inspirational lyrics such as the Isley Brothers' "Shout," Marvin Gaye and Tammi Terrel's "Ain't No Mountain High Enough," Bill Withers' "Lean on Me," Pharrell Williams' "Happy," and Justin Timberlake's "Can't Stop the Feeling!" among others.

"And I think all the strategies we can get to improve our practice, the more the better. You can't get enough to help us be able to better reach students."