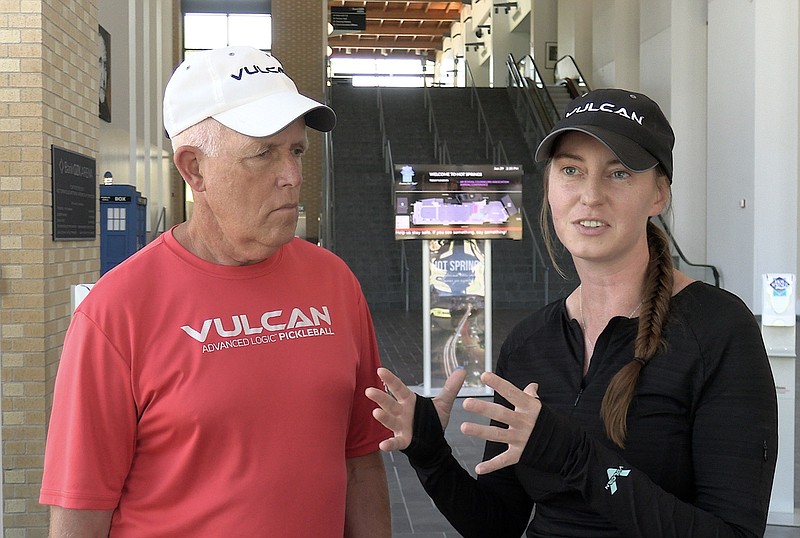 Kefi Pickleball owners David Tappe, left, and Kate Tully explain the format of the Spa City Classic inside the Bank OZK Arena Wednesday. - Photo by Donald Cross of The Sentinel-Record

Pickleball enthusiasts from around a dozen states will converge on the Spa City to compete in the annual event, and 36 courts will be set up across the convention center where players will compete in a round-robin stage before entering the knockout bracket.

"People were getting tired of traveling a long way to places and maybe only playing two matches," Tappe said. "You could've traveled a long distance, paid a lot of money for gas, food and hotel, then you play two matches and you're done. We experienced that in talking to people that they were getting frustrated by that. So we said we can do that better."

Compared to tournaments with just a double-elimination knockout stage where some players might go two-and-out, players at the Spa City Classic will at minimum play four games in just the round-robin phase. Some players in the round-robin stage might even play six games.

The round-robin stage determines the seeding for the knockout bracket, and even if players were not successful in the first stage, they could still make a deep run in the knockout rounds.

Pickleball competitors might have smaller tournaments in the communities where they are from, but the Spa City Classic allows those players to play against opponents they would not see in their usual recreational leagues.

"When a player is investing money and time and travel in tournaments it's because they want to compete against players that they don't get to play with ordinarily," Tappe said. "Every once in a while you want to jump in the deep end and test your skills against players from other places and see how you compare."

The Spa City Classic kicks off with the Offspring Open on July 7. The opening-night event fields mixed teams of grandparents, parents and children playing together in a fun, family-oriented competition.

The Offspring Open is an exciting opportunity for family members who play in different age and skill divisions to play together in a tournament environment.

Tappe and Tully expect the turnout at the classic to be around the same as previous years at 400 to 500 players.

The Spa City Classic supports play for all skill levels. Tappe said in pickleball, the beginning levels of play are usually identified as the 2.0 or 2.5 levels, and that scale increases all the way to more advanced players around the 5.0 skill level.

"There are several players that have written us nervous and excited because this is their first tournament, which I love," Tully said. "You have a ton of players from other states that some of them travel every weekend it seems like all over the nation. It's amazing. This is a game where you can get on the court after five minutes. It doesn't take long to learn it."

The tournament is set up to make sure players of similar skill level are facing off against each other on the courts.

The classic's crew will go to work early in the morning on July 7 turning the blank concrete floor of the convention center into 36 courts.

The floor layout will also include a pathway down the middle between all the courts where sponsors can set up booths, players can chill between games and fans can watch their favorite competitors.

"It is kind of like a carnival midway," Tappe said. "That's gone a long way in helping our sponsors to sign on. Sometimes in tournaments, sponsors or vendors are kind of given a side room area or a side area hallway somewhere. ... It's all integrated together (here)."

Players who advance through the knockout stages and into the medal matches will play their medal games on courts surrounded by arena seating and gold level sponsors.

Tappe and Tully highlighted a father-daughter duo that made it to a championship match last year, and the daughter was both nervous and excited to play on the championship courts.

Her nervous energy led her to playing a great match, and the duo took home the gold medal.

"It was like the Stanley Cup, the Super Bowl, the World Series wouldn't have competed with the excitement she had of winning that gold medal," Tappe said. "And her dad was a little bit proud."

While Tappe and Tully received plenty of positive feedback after last year's classic, they do plan on making some changes to the knockout bracket.

Players said they preferred to play a two-of-three series to 11 points -- winning by two points -- in the knockout bracket instead of one game to 15 points.

"As soon as we can present that format in the bracket play we're going to do that this year," Tappe said. "The bigger round robins will still be one game to 15, win by two."

Last year organizers for the tournament dealt with the challenges of the pandemic, but this year Tully said it is nice not having the coronavirus hanging over their heads as they plan for the event.

"I think instead of COVID this year we have a lot of the inflation from Ukraine and other events that are happening," she said. "So I think that's given some players pause. But even so, pickleball has a way of finding its way into people's budgets."

There is no admission fee for fans, friends and family members who want to watch the matches at the Spa City Classic.

Registration to play in the tournament ends July 3, and the cost to compete is $60.

"It's something for everyone," Tappe said. "Whether you've just begun the game or whether you're competing at a pretty high level, there's a division here for you."