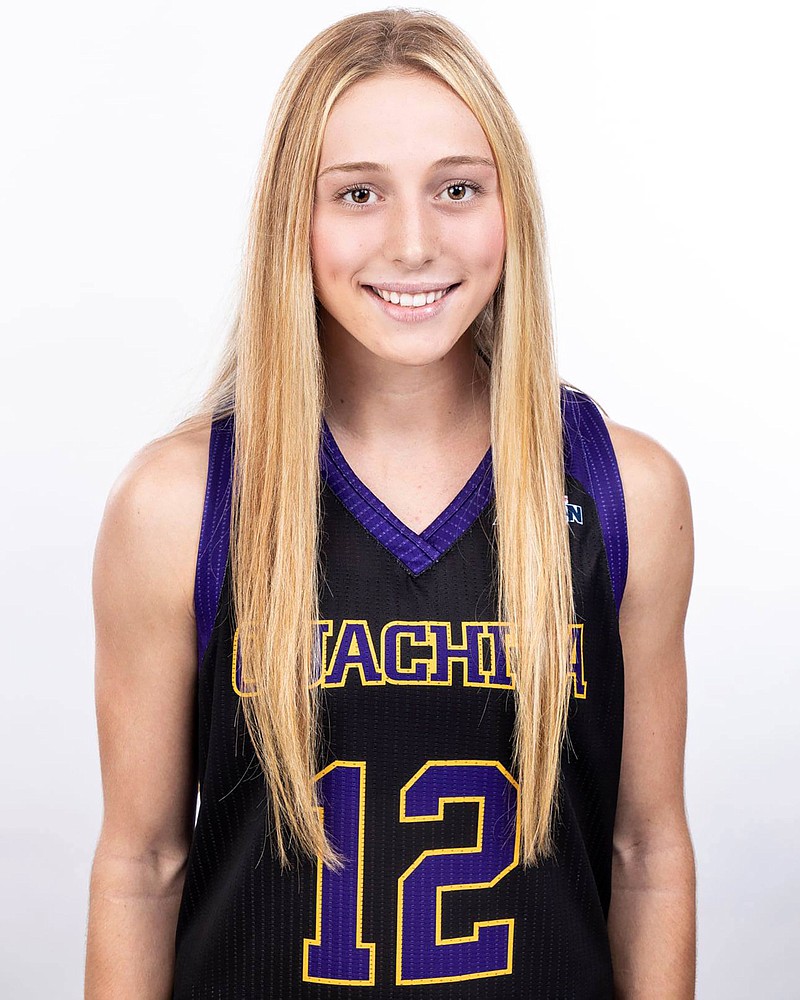 Lake Hamilton great and Ouachita Baptist University freshman Aspen Thornton eclipsed the 500-point mark in her career before finishing her first season as a Tiger with 608 points, and Thornton led Division II women's basketball with 23.4 points per game.

Thornton hit 500 points in OBU's 80-56 loss to Southwestern Oklahoma State Feb. 12, and the Hot Springs native was not even aware she was close to hitting that milestone.

"To be honest, I didn't even really think about that," Thornton said. "I didn't really keep up with those stats. Really just throughout the season I was just trying to just help my team in whatever it was. Whether it was scoring, defense or just making plays for other people."

The former Lady Wolves standout reached the 500-point milestone with four games to spare in the regular season, and Thornton said she was surprised when someone told her she reached that mark.

"I was kind of surprised," she said. "I wasn't really keeping up with that. It kind of hit me. I was like, 'Dang.' It came by kind of fast. I guess it was good to feel that, but really I don't know how to explain it. I was just trying to just do whatever for my team. I didn't want to take that upon myself."

The second closest player to Thornton's 23.4 points per game in Division II women's basketball was Anderson University's Shameka McNeill at 22.5 points per game.

OBU fielded a young roster this season with six freshmen, one sophomore, one junior and three seniors. As just a 5-6 freshman, Thornton worked on different parts of her game during the summer, so she could have a big impact and help her fellow young teammates.

"I didn't really know my potential coming into college because I am a lot smaller than a lot of people," she said. "I just feel like this summer just working on my game trying to get better so we could all help each other win some games this season."

Thornton did not expect to have this much success in her first season at OBU, and the freshman realized before the season started that she would have to change up her game a little bit to adapt to the collegiate level.

"I kind of did think I am a lot smaller and stuff, so I'm going to have to figure out ways that I'm going to be able to still make an impact," she said. "I'm not the biggest person out there, so I was trying to work on developing my game more. Like more of the mid-range and stuff instead of trying to get in there with all the bigger people."

Thornton said one of the keys to her success this season was that she did accomplish the goal of improving her mid-range game.

"In high school I did a lot more of getting to the rim," she said. "Also this summer I worked a lot more on my shot to try and have a quicker release because in college the game is much faster. I knew that this year playing at point guard, after the season started rolling people knew that I was scoring, then I was able to know situations and be able to get teammates open which really helped our team as a whole."

When the season started, OBU was a tougher team to plan for because of the amount of youth on the roster. However, as the season progressed, teams started to figure out the strengths of the newcomers.

Thornton said that she and her teammates had to continue to develop their individual games and once opponents started to key in on her, she could get the ball to her teammates.

One special moment in the season stands out as a prime example of how Thornton helped her teammates by becoming the provider instead of the scorer.

With 8.1 seconds left on the clock and the score knotted at 71-71 between OBU and archrival Henderson State, the Tigers had to drive the length of the court for a potential game winner.

"I knew we didn't have any timeouts so I knew we couldn't advance the ball," Thornton said. "I just looked at coach and he was like, 'Just try to take it.' Makayla (Miller) inbounded the ball, and in my head my first thought was try to get to the rim, get fouled or hit a shot. Then I was like they're going to think I'm the one taking the shot. They're going to key in on me, so I'm going to have to make a play."

Thornton dribbled down the left side of the court, drew a double team and then made a splitting bounce pass to teammate Claudia Vanzant who scored wide open at the rim as the buzzer sounded to down the Reddies.

"When I dribbled down I just saw two people on me and somehow I saw Claudia out of the corner of my eye and somehow I made the pass to her," Thornton said. "As soon as I passed to her I knew it was going in. The adrenaline rush and it was just a good feeling to see everyone run over by Claudia. It boosted her confidence so much, and I was so happy to see that for her."

In her first season as a student athlete, Thornton has not just dealt with adapting to the collegiate level on the court but also in the classroom.

"Being a student athlete is a lot more difficult in college I would say than in high school because college is a lot more work load," she said. "I try to get my work mostly done in study hall or earlier in the day because we have practice in the evenings. I'll go back to the gym after practice. I'll go eat dinner and go back. Normally I try to make sure I have all my work done before I go to the gym, so I don't have to worry about that."

Looking back at her time at Lake Hamilton, Thornton said she had great coaches in high school who were always there for her and who she still talks to today.

"They've always helped boost my confidence," she said. "Through high school they helped me a lot. Like coach (Blake) Condley, he would always let me in the gym. He knew if I was going to text or call him he would get me in the gym. He would rebound for me. Just the small things that really have helped me."

Thornton shot a team second-best 38.1% from 3-point range, but she still wants to improve on some aspects of her perimeter shooting heading into next season.

"I do want to work on getting my release a little quicker because people are going to start guarding me tighter," she said. "Also I want to work on still implementing the pull-up game in my shot. That's just as important as a layup because it's going to be difficult to get into the paint whenever people are keying in on me."

OBU ended this season with a 10-16 overall record and an 8-14 tally in the Great American Conference.

Thornton said the Tigers held higher expectations going into this season, but added that OBU really improved as the season went along. With so many young players on the team, Thornton expects the Tigers to continue to improve with a year under their belts.

While teams across the league will definitely be aware of the threat Thornton poses heading into next season, that could potentially make the Tigers even more dangerous.