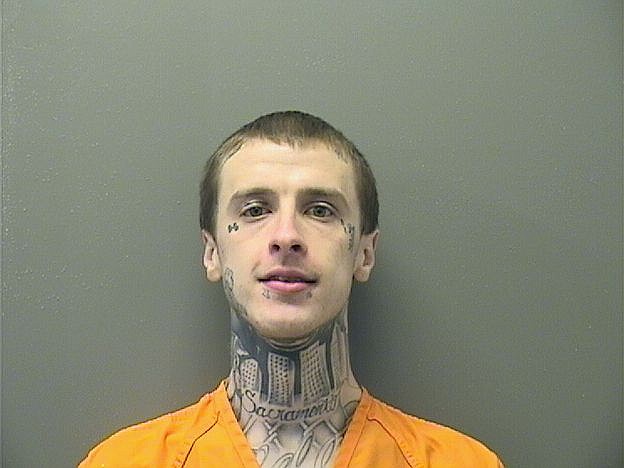 A Little Rock man who allegedly fled from a traffic stop was arrested Thursday morning following a high-speed pursuit that ended when spike strips were deployed across a roadway in front of the vehicle, causing it to wreck.

Zachary Remington Dixon, 25, a felon on parole, was taken into custody shortly before 10 a.m. and charged with felony counts of fleeing in a vehicle and first-degree criminal mischief, each punishable by up to six years, and misdemeanor counts of reckless driving, speeding, driving on a suspended driver's license, and fictitious tags.

Dixon, who was also cited for no liability insurance, no seat belt, expired tags, improper turn signal and obstructing governmental operations, was being held on a zero bond and was set to appear Friday in Garland County District Court.

According to the probable cause affidavit, around 9:45 a.m. Thursday, Arkansas State Police Trooper 1st Class Dylan Robbins was patrolling in the area of Central Avenue near Amity Road when he saw a white Ford SUV headed southbound and noted the tags had expired in 2019.

He got behind the SUV as it turned onto Amity and then pulled into a parking spot at Harps Food Store, 5536 Central Ave., and activated his lights to make a traffic stop. A white female passenger got out and walked toward Robbins, while the driver, later identified as Dixon, opened his door and looked at the trooper while saying "something about a job interview."

Dixon then allegedly shut the door and sped off, heading west on Amity with Robbins in pursuit. He noted Dixon "demonstrated complete disregard for the safety and welfare of motorists by traveling at a high rate of speed and passing in no-passing zones, passing in blind curves, and passing over blind hilltops."

Robbins said Dixon forced numerous motorists to "run off the roadway" by getting in their lane. During the pursuit, they passed a Garland County sheriff's deputy who began to follow and alerted other deputies including one ahead of them who said he would put out a spike strip.

The SUV continued passing other vehicles at a high rate of speed, Robbins said, noting when he would get closer to attempt a PIT maneuver, the driver would "brake check" him. A PIT or "precision immobilization technique" maneuver is a method used by some law enforcement agencies to stop fleeing vehicles by temporarily disabling them.

As they passed South Moore Road, Robbins was advised the spike strip had been deployed "just ahead of us" so he backed off as the SUV hit the strip. The SUV continued about half a mile before the driver lost control, left the roadway, struck a wooden sign and stopped in a ditch.

Dixon allegedly attempted to drive out of the ditch, so Robbins put the front of his unit against the driver's side door to keep him from getting back on Amity. Robbins got out and began giving orders to Dixon, but he reportedly refused to roll his window down so Robbins broke the window to get to him.

Robbins and Trooper Justin Parker finally pulled Dixon out and took him to the ground. When asked, Dixon reportedly said he was not injured and declined to be checked out by LifeNet personnel.

A computer check showed Dixon had warrants for parole violations and from other agencies. Dixon told Robbins once he got to the jail he was "not going to cooperate with questioning or sign anything."