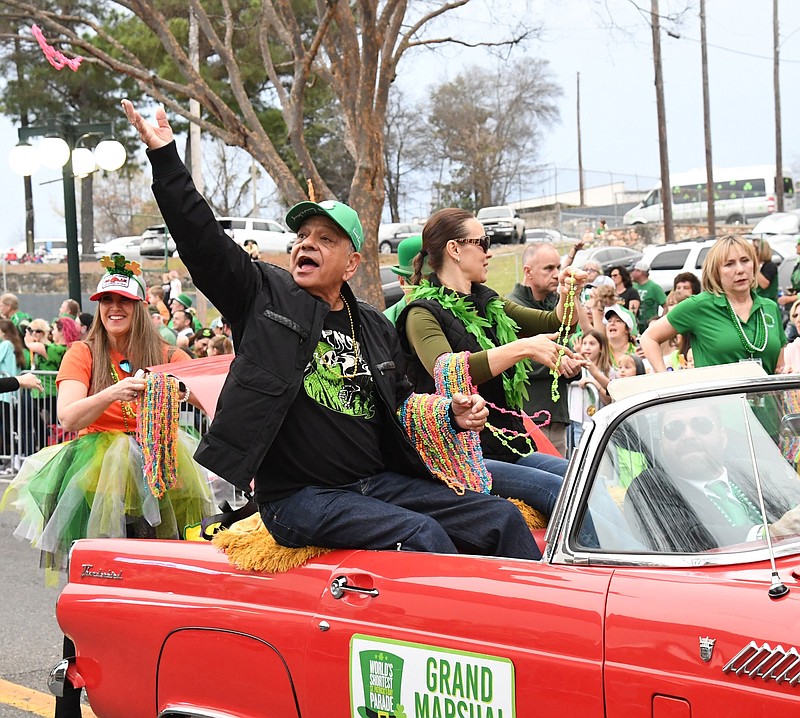 A late-arriving thunderstorm didn't spoil the fun for thousands of parade-goers who crowded into downtown Hot Springs on Thursday for the First Ever 19th Annual World's Shortest St. Patrick's Day Parade, the first full-blown edition of the event in two years.

After two years of cancellations due to the COVID-19 pandemic, "Machete" actor Danny Trejo and Cheech Marin of the comedy duo "Cheech and Chong," as well as his wife, Natasha Rubin, finally made their way to Hot Springs on Tuesday. Trejo served as the official starter of the parade and Marin served as the celebrity grand marshal.

Both Trejo and Marin threw plenty of beads to the crowd. Marin followed another entry from The Valley of the Vapors Independent Music Festival of a "Big Cheech Puppet."

The "good friends," as Trejo deemed their pairing, said they went mining for crystals together on Wednesday. Trejo said he also enjoyed Oaklawn Racing Casino Resort on his trip.

On Thursday, Trejo was in downtown Hot Springs before the parade festivities began. He visited local shops including Bathhouse Soapery & Caldarium, where he purchased some products. He also stopped by the Ohio Club.

As Trejo was getting into a car to leave, he realized there were groups of people crowding the street and got back out of the car to take photos with all of them.

Marin said on Thursday that his trip so far had been filled with "hunting for crystals, visiting dispensaries, hanging out, going to dinner (and) meeting people."

"I love this town," Trejo said. "I've been looking at some properties in a really, really nice spot. Friendly people. What more can you ask for?"

Marin announced that he was looking at some land to purchase in Hot Springs, as well. When asked if they planned to buy a property together, Trejo said, "I don't know."

"This is such an honor, such a great city," Trejo said. "I just want to have a lot of fun. I've had nothing but fun since I've been here."

Before the parade began, Bridge Street was officially measured at 98 feet exactly, ensuring it is still the "world's shortest street in everyday use" according to Ripley's Believe It or Not!

One of the highlights of the parade included the 4-ton Big Idaho Potato Truck making the sharp turn onto Bridge Street from Central Avenue.

Willy Bradford, part of the "Tater Team" traveled with The Big Idaho Potato to Hot Springs for the parade. Although it is her first time at the parade, the potato made an appearance in 2019.

Bradford said Thursday "this is not what I expected" about Hot Springs.

"Everyone is so nice, the food is amazing. The scenery, the weather, it's beautiful."

The Big Idaho Potato travels across the country to promote the "certified heart-healthy Idaho potato," according to the truck's website. Bradford said the giant potato travels to 70 cities within seven months. The "Tater Team" has to leave before the Sugar Ray concert tonight in order to make it to Baton Rouge, La., for another St. Patrick's Day celebration on Saturday. 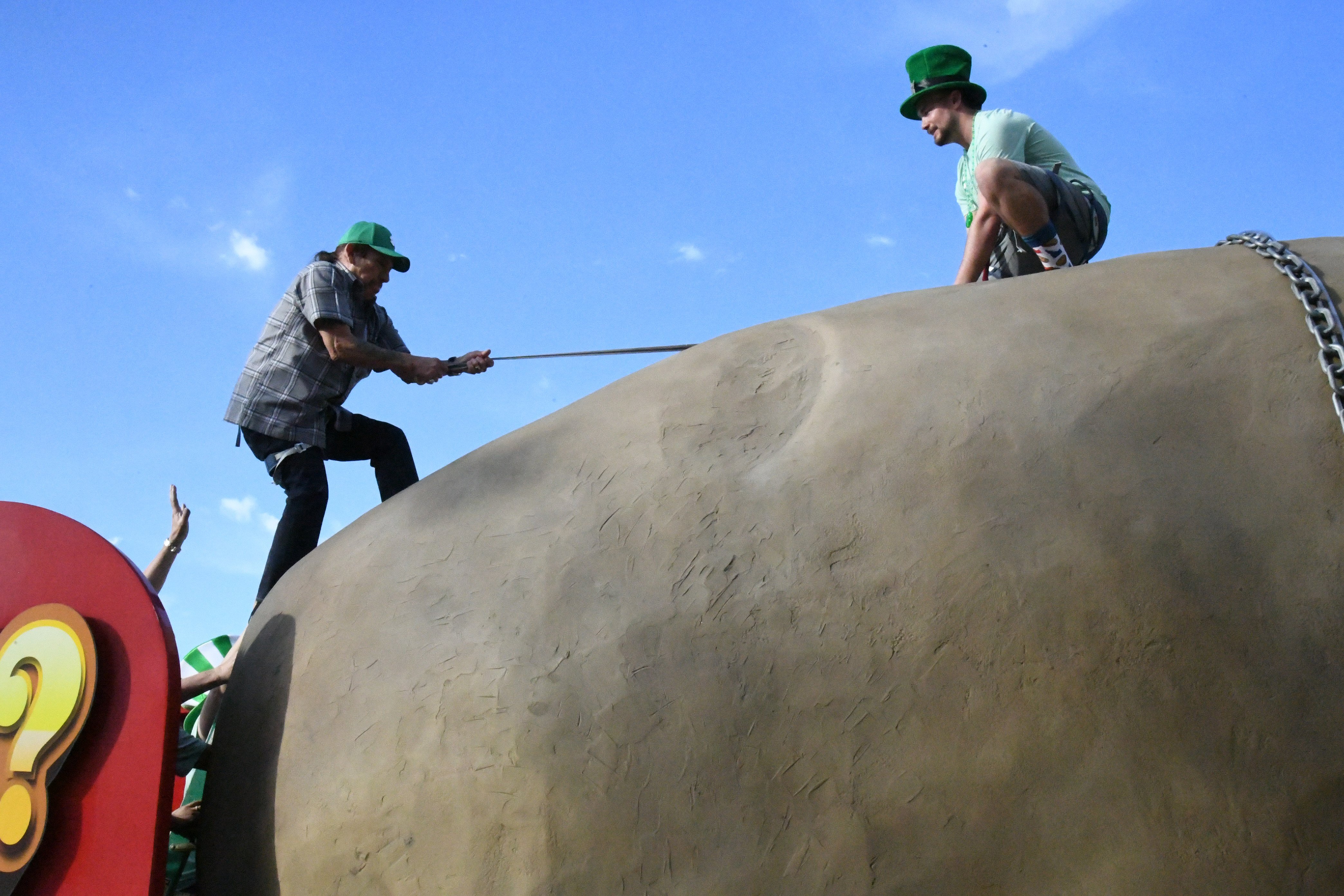 Actor Danny Trejo climbs to the top of The Big Idaho Potato on Thursday prior to serving as the official starter of the First Ever 19th Annual World’s Shortest St. Patrick’s Day parade as Kyle Rauterkus watches from up top. - Photo by Tanner Newton of The Sentinel-Record

Trejo previously told The Sentinel-Record how excited he was to see the 4-ton potato.

On Thursday, that dream of his came true. Trejo was able to meet up with the "Tater Team" and make his way on top of the potato, where many photos were taken.

"When we heard that Danny Trejo wanted to get on top of the potato, we all freaked out," Bradford said.

There were also some additional parade entries this year including PAW Patrol characters Skye and Marshall and two new leprechauns.

Returning as the World's Biggest Leprechaun, Monte Everhart was joined by Arkansas radio personality Roger Scott and Stephen Inman-Crowley, an executive broker at Rix Realty and owner of the LoX Salon and 420eats Food Truck Court.

Scott has been waiting two years to officially join the parade as a leprechaun.

"I'm excited as can be," he said on Thursday. "I didn't know how excited I was going to be until I put this outfit on."

The Hot Springs native said he was offered the role of a leprechaun in place of former leprechaun Dick Antoine, who retired in 2020 due to health issues and died in 2021.

"I'm just thrilled to be a part of it because I'm not taking it lightly," Scott said Thursday.

"If I don't lose a limb tonight and I don't do anything that causes any trouble, I hope they'll ask me back for the next 20 years." 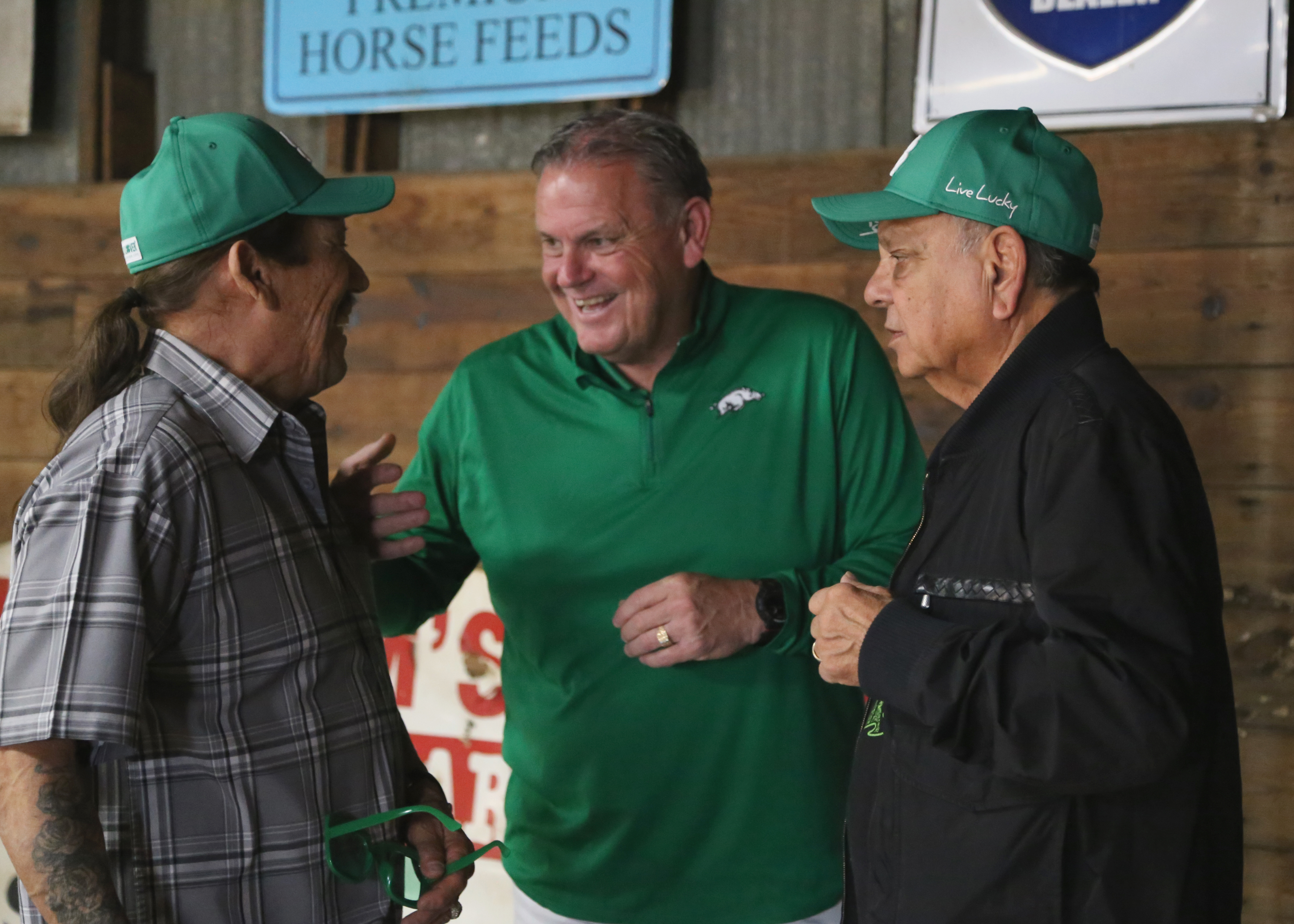 Sam Pittman, center, the Razorbacks' head football coach, visits with actors Danny Trejo, left, and Cheech Marin, Thursday at a private event held at Williams Brothers Feed prior to the start of the First Ever 19th Annual World's Shortest St. Patrick's Day Parade. - Photo by Beth Reed of The Sentinel-Record