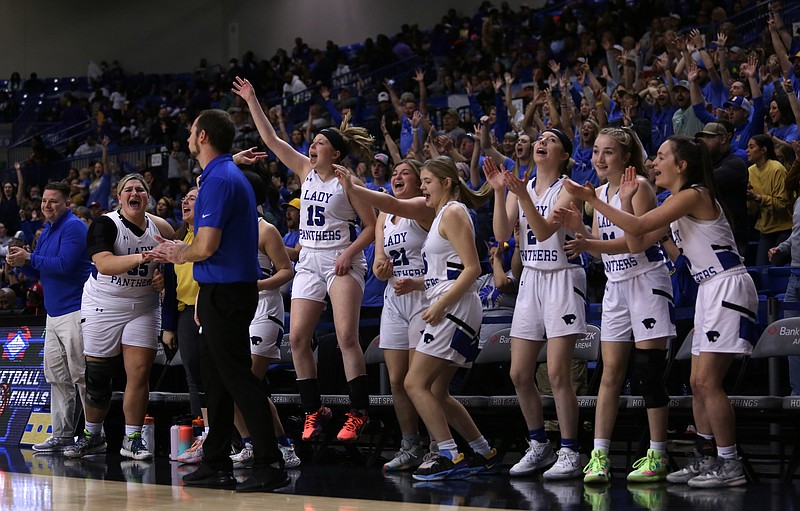 Bergman players and fans celebrate as the clock winds down on the Class 3A girls basketball state championship game on March 12 at Bank OZK Arena. Bergman defeated Lamar 66-42. - Photo by Colin Murphey of Arkansas Democrat-Gazette

The state championship games were split into six two-game sessions for two sessions a day based on classification between Thursday and Saturday.

"I think when we went to the sessions, which we did several years ago, it just made good sense," he said. "I thought we had great crowds. We saw some great basketball, and it was also great for the community. The economic impact of all these thousands of people coming to Hot Springs from all over the state every year is just great for our community."

The Class 4A championship games played Saturday night between Nashville and Farmington on the girls side and Magnolia and Blytheville on the boys side both sold out.

"It was great," Arkansas Activities Association Assistant Executive Director Derek Walter said. "We had a great crowd. Really every game was solid. Capped off by the one there at the end."

The Class 6A boys title game between North Little Rock and Bentonville Thursday night was the third highest attended game with 4,237 fans. Following closely behind, the Class 3A boys championship between Osceola and Dumas Saturday afternoon drew 4,134 fans into Bank OZK Arena.

Arrison said it was great that the Class 4A games sold out at 6,500 fans apiece.

"It happens every now and then," he said. "I think this is maybe the second one in five years, so it's not that big of an issue. We had room for everybody that wanted to come basically, which is great. I wish all of them would sell out. I wish we had people lined up outside for every session."

Walter reiterated that there is usually a game or two that sells out every year, or there is a game that is at capacity.

"We did quit selling tickets, but we slowly got everybody in on a pass," he said. "It was about as full as you can get it without getting in trouble from the fire marshal."

Some high school basketball fans across social media voiced opinions that they wanted the state championship games moved to a bigger venue and away from Hot Springs.

"That space in Hot Springs is a great size," Walter said. "You don't ever want to be in a place that's too big that isn't intimate. This was loud and intimate for our students."

Walter emphasized that Hot Springs is a great place to hold the state finals.

"We get some complaints on, 'Well, you need to move it to a bigger venue,'" he said. "If you've ever been to a game, do you want to be in a stadium that seats 16,000 and there's 3,000 there, or do you want to be in one that's three-quarters full and it's loud? That's why Hot Springs is a great place to have the finals."

Visit Hot Springs helped the Arkansas Activities Association add a large video screen inside Bank OZK Arena for this year's state finals that displayed the game on the court and showed replays.

"That's the type of stuff we want to do to make the event the biggest we can," Walter said. "For us it's about that's the biggest stage probably nine out of 10 players there will ever play in. We want to make sure the spotlight's on Hot Springs, and that venue and event is as big as we can make it."

The session format gave people working the state finals a break, and the format eliminated other obstacles when it came to fans.

Walter said the session format allows for teams to make sure their fans are the fans in the stands for their games.

"Before you could stay for the whole da,y and we had some issues with parents of the last game of the day coming and getting a good seat in the first," he said. "That hurt other teams being able to get good seats for their son or daughter's game. That was kind of what led to the sessions. Just making sure that fans were able to attend the game they were most excited about or had a vested interest in."

Bank OZK Arena also recently hosted the Archery in Schools State Championship and the All-State Music Conference. These events bring a large number of people to the Spa City.

"I think it's great that the kids from all over the state come to Hot Springs and see what we have to offer and then their families come as well," Arrison said. "A lot of these people, it might be their first time to Hot Springs. Then they come back for vacation because they enjoy everything Hot Springs has to offer. It's got a great economic impact on the entire community and the entire county."

Arrison said the contract to host the state basketball finals continues through 2026, so basketball fans will continue to flock to Hot Springs for exciting weekends of state championship basketball for years to come.

"It's just a big positive for our community," Arrison said. "Gosh, people come in from all over the place. If you talk to our restaurants, talk to our convenience stores, talk to everywhere, everybody gets busy from it."