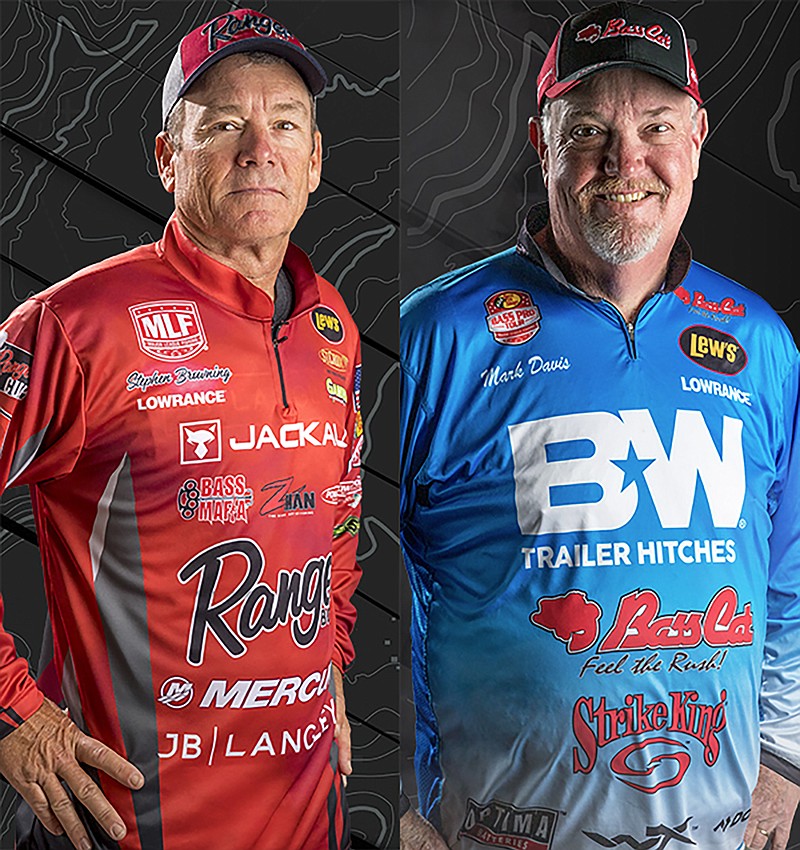 Anglers Stephen Browning, left, of Hot Springs, and Mark Davis, of Mount Ida, are competing this week in the REDCREST 2022 at Grand Lake O' The Cherkokees in Tulsa, Okla. - Submitted photo courtesy of Major League Fishing

Hot Springs natives Stephen Browning and Mark Davis are competing in Major League Fishing's REDCREST 2022 with a prize of $300,000 on the line in Tulsa, Oklahoma, this week.

Both professional anglers, Browning and Davis started fishing from a young age and were influenced by their surroundings on their way to becoming professionals in the sport.

Originally from Pine Bluff before moving to Hot Springs in 1995, Browning grew up in a competitive family and eventually put his natural competitiveness toward fishing. Now, Browning has been fishing professionally for 27 years and competitively for 42.

"We played basketball, football and baseball and did all the growing-up sports," Browning said. "Fishing became a passion of mine when I was probably 10 or 11 years old. Instead of doing the traditional summers of playing baseball, I just chose to fish. That's kind of what led me to where I am now."

Davis is in his 37th year fishing as a professional, and his upbringing in Hot Springs started his passion for fishing.

"I got into fishing largely because I grew up in Hot Springs," Davis said. "With all the water we had around there, it was just something I fell in love with as a kid."

"My fondest childhood memories were dad picking me up from the school yard," he said. "We'd go straight to the lake. He's the one that got me into it at a very young age. ... I had an early realization, you know, that you can make a living catching fish."

There were plenty of tournaments around the area and after graduating high school, Davis moved to Lake Ouachita before turning pro at 21 years old.

"I had a lot of encouragement," he said. "The encouragement early on was not to be a professional angler. It was just to be an angler, a good angler. As I got older, probably in my late teens, I won some tournaments there around home. That's probably when I was 18, 19 and starting thinking about doing it for a living."

Davis traveled to New York for his first big event as a 21-year-old pro. In today's competitions, anglers can research the bodies of water they are going to fish on to a much greater extent than they could when Davis first started.

Today he has many applications on his phone that help him study before a competition, but when he first started he had to try to find all that information when he got to New York.

The Bassmaster Classic traveled to Pine Bluff in 1984 and after seeing the competition, a 17-year-old Browning set his sights on becoming a professional angler.

Browning started to fish in a lot of tournaments with his brother after graduating college and then moved on to regional Pro-Am style tournaments to test his ability.

"Having success there it just kind of gave me, I guess, the confidence to even pursue it at a higher level," Browning said. "It's worked out. I can't complain."

Browning started fishing professionally in 1995, and he finished 25th out of 380 in a tournament on the Arkansas River at Pine Bluff in his first professional outing.

"It was a tournament where I felt like if you're ever going to get into professional fishing and compete against the best there is in the country and worldwide, that particular event being kind of in my backyard would be a great place to start," he said. "That probably was the moment I felt like I could compete at the highest level."

"That particular event was kind of the one that I felt like you know, 'Hey, I can definitely do this,'" he said. "Qualified for several Bassmaster Classics in the late '90s and early 2000s. Sports and competing and all is a confidence deal, and those particular events really gave me the confidence that I could compete at the highest level."

The Major League Fishing circuit Browning and Davis compete on now started in 2019. Both pros compete in the Bass Bro Tour, the MLF's top-level circuit with 80 total anglers.

Browning added that one of the biggest challenges is finding a support system from back home while traveling. He receives great support from his wife and his son while he is on the road, and that helps him concentrate on fishing.

Browning calls Hot Springs home since he has lived in the Spa City since 1995, and the city offers him plenty of support. He actually chose to move to Hot Springs because of a line of professional anglers that came from the area.

"You can't stop in Walmart, Kroger, go to the tackle store, wherever you're at, without somebody keeping up with you telling me, 'Good job last event or good luck in the upcoming event that you're fishing,'" he said. "Hot Springs is a very traditional, rich fishing community."

Although Davis lives in Mount Ida now, he still holds a special place in his heart for Hot Springs.

"It's been a real blessing for me being born and raised in Hot Springs and Garland County," he said. "Even though I don't call Garland County my home anymore, I'm only 20 miles from the county line. That area has really helped me in my career. It's a great area to live in, a great area for bass fishing and fishing in general."

Looking at the sport today, Davis highlighted the challenges of using new technology. Even if an angler has the newest technology in his possession, the angler still has to know how to use the technology to his advantage.

"If you want to stay on top of this game, you have to really stay current," he said. "You have to remain a student of the sport because it's ever changing with technology. ... You can have the latest and greatest, but then applying it and actually making it work for you and put more fish in the boat for you is another challenge."

Although he said he has had a mediocre 2022 season so far, he aims to win a REDCREST tournament that pits the top 41 anglers from the 2021 season against each other for a grand prize.

The Bass Pro Tour has had three stages so far this season, and Davis had a bad stage three at Lewis Smith Lake in Cullman, Alabama. He got off to a good start in stage two at Lake Fork in Quitman, Texas, but the weather hampered his finish.

"Second event was going pretty good until the ice storm hit," Davis said. "You learn at 58 years old I don't perform as well in sub freezing rain and sleet as I did when I was 28. That's just part of it though."

Browning boasts five career wins, 43 top-10 finishes, 73 top-20 finishes and a winnings total of $1,597,372. He currently sits in 24th in the Angler of the Year table after the three events this season.

Browning is yet to win while facing the current group of anglers he is competing against and said an angler cannot even have a bad hour at this level of competition.

"I can't say that I've had my best days on the water," he said. "Just little things that I've not done. Decision-making and things of that nature that have cost me several places I feel like. I can do better. I can do better. I feel like I'm definitely on the right track, but a couple of different decision-making processes would really put me over the top, so to speak."

REDCREST will take place on the Grand Lake O' The Cherokees, and Browning said the lake has a little bit of Lake Hamilton, DeGray and Ouachita all in one.

"I feel homey here," he said. "I feel like it's a lake I'm very comfortable with, and I'm hoping kinda my knowledge from what we do and how we fish on our lake during the winter time back home will definitely help me out this week."