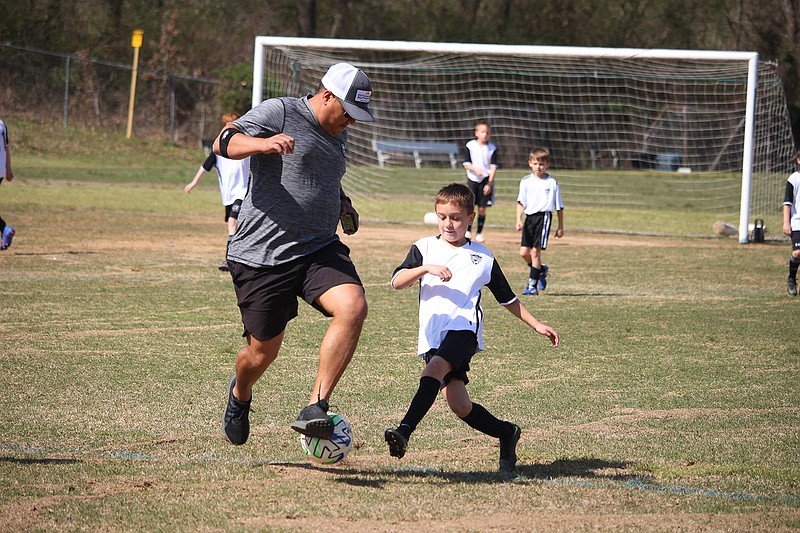 Hot Springs Soccer Association coach Jjesus Anaya goes into a challenge against Hayzten Anaya while players and parents scrimmaged at the Munro Soccer Complex Saturday morning. The HSSA made improvements to the complex and has seen a growth in players from surrounding areas. - Photo by Krishnan Collins of The Sentinel-Record

Around 145 players signed up for micro soccer, and 95 athletes signed up for the HSSA's travel clubs this spring. The classic team, the highest level team the association fields, currently holds 14 players for the 12-and-under team.

Since high school soccer is currently in season, the HSSA is missing about 35 players that usually play on teams in the fall.

"We're actually getting a lot of players from surrounding areas, too," HSSA president Edgardo Argueta said. "Glenwood, Bryant and also from Bismarck. Which is really nice. We have a really good program. We've had some coaches for a few years, and they've kept with that same team. Word of mouth helps recruit a lot of players."

Argueta said the HSSA is also getting a lot of players from the Lake Hamilton area that had been playing elsewhere or not playing at all.

The organization saw consistent growth in its numbers between 2013 and the start of the pandemic, but the pandemic hampered those numbers in recent times. Now, families are looking to return to normalcy this spring.

"It's going to be back to my roots," he said, noting his return to the under-4 program. "This is where I started with my kids where I didn't know I was going to continue coaching them. They're 11 and 8 now. I've been coaching them for the past eight or nine years. This is where it started. I hope I'm able to shed that light for another parent to say, 'Hey, I can do what he's doing.'"

The association looks to field around three classic teams when the high school soccer season ends. One team will be composed of high school seniors and juniors, and another team will be a freshman and sophomore team. There will also be a team of seventh and eighth graders.

"They have high expectations from their coach," Argueta said. "With those classic teams, they will be traveling to three tournaments of their choosing. A few of them have gone to Broken Arrow (Oklahoma) and won the tournament. We've gotten some second place finishes in Shreveport (Louisiana)."

The game of soccer continues to grow in Hot Springs, and Argueta has seen that growth on the high school level. He volunteered to be a referee for Lake Hamilton games, and he watches Hot Springs and Lakeside matches as well.

"Seeing the players and me being able to know them by name because they've come through our organization, and I'm waving at them all enthusiastically, probably embarrassing them," he said. "I enjoy that because I see where our program is going. ... Being able to see them progress in their skills and be able to have a well-rounded coachable player at the high school level has been a goal of mine."

Argueta has also seen the amount of girls soccer teams at the HSSA increase. When he first started at the association, there was only one girls soccer team, and now there are three girls teams.

"Which is amazing," he said. "Before, in the spring, you would not have any. So just the ability for us to be able to have a girls soccer team for pretty much every other age group has been fantastic for the growth."

The HSSA had four girls soccer players that made the Olympic Development Program.

"It's really neat," Argueta said. "Three of those girls are on our team, and the other one that made it is on the older team that I help coach as well. I'm not saying it's from me. I'm saying this is from their dedication to get better and want to play soccer at a higher level. It's been fantastic."

National Park College started its men's and women's soccer programs in 2021, and Nighthawk coaches and players have also chipped in to coach at the HSSA.

The growth of quality on the pitch has coincided with a positive growth in the HSSA's facilities. The organization added an accessibility ramp to its fields at the Munro Soccer Complex last summer and has been using Lawn Doctor to improve the quality of its fields.

"Which has been tremendous in our growth," Argueta said. "It just shows how much we've gone from playing on stickers and grass and weeds to now playing on actual Bermuda (grass). There are some bare spots, but that's part of the growing pains."

The association also purchased two new sets of goals and balls for its teams.

The HSSA and its sponsors have also helped players by awarding scholarships to families who would not have been able to afford to play.

"That was one of my biggest things back in my day," Argueta said, explaining a family helped him pay to play. "My parents couldn't afford soccer. ... Now we don't have a particular family. We have multiple families that are able to contribute or set up a scholarship fund for us to be able to give seasonal scholarships."

The HSSA is not just doing things to help players, but the association is also reimbursing referees for their certification course after they officiate 20 games because of a referee shortage.

The HSSA also started the LB Pettigrew Scholarship that gives two seniors $500 for the work they have done with the association.

"The past few years we've had a lot of success and a lot of applicants put in for it," Argueta said. "We're hoping we can get more than 10 applicants this year."

The legacy of the HSSA continues to grow in Hot Springs, and Argueta found a 2002 newspaper clipping showing Jjesus Anaya, a player who is now a coach for the organization.

"I just see it is a legacy continuing to be built from day one from 2002 until now," Argueta said. "We're doing good things out there for the community, for growing the sport of soccer and for building character and teamwork in individuals."