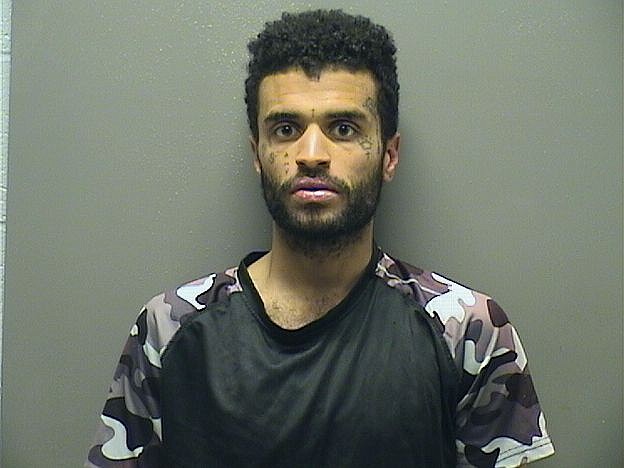 A local man who fled from a Garland County sheriff's deputy last year claiming he thought the patrol unit was a spaceship chasing him pleaded guilty and was sentenced Monday to six years in prison on fleeing and drug-related charges.

Marcus Alexander Calhoun, 26, who has remained in custody since his arrest on Dec. 1, 2021, pleaded guilty in Garland County Circuit Court to a felony count of fleeing and to violating his probation from an Oct. 5, 2020, conviction for impairing the operation of a public facility and was sentenced to six years in prison on each, to run concurrently.

He also pleaded guilty to a misdemeanor count of driving while intoxicated, first offense, and was sentenced to one year in jail, fined $600 and ordered to pay $300 in court costs and his driver's license was suspended for six months.

According to the probable cause affidavit, on Dec. 1, shortly before midnight, sheriff's Cpl. Matthew Cogburn was eastbound on Albert Pike Road near Music Mountain Road when he saw a white passenger car traveling toward him at a high rate of speed with its headlights off.

Cogburn turned around and caught up to the vehicle as it crossed the Highway 270 west bridge and activated his lights and siren to make a traffic stop. At that point, the driver, later identified as Calhoun, increased his speed and continued westbound as Cogburn paced the vehicle at 85 mph.

The vehicle continued to the entrance of the Garland County Detention Center at 3564 Albert Pike where it finally stopped. Cogburn notes he saw Calhoun place his hand out the driver's side window and then he yelled, "I ran because you're a spaceship and so is that red thing."

The deputy noted Calhoun "continued to talk very rapidly" so he couldn't understand what he was saying and was "continuously pulling at his hair and moving his head back and forth in an exaggerated manner."

Deputy Kevin Hampton arrived to assist and they were able to get Calhoun out of the car and asked him if he was taking any medications or "illicit drugs," and Calhoun said, "Oh yeah, I'm high on meth right now. I've been shooting up all day."

When asked, Calhoun declined to take the standard field sobriety tests and inside the detention center "continued to talk rapidly about different things." Cogburn noted his pupils were extremely dilated and he seemed "very anxious." He agreed to provide a breath sample that registered zero percent blood alcohol.

Cogburn noticed a fresh puncture mark "consistent with intravenous drug use" in the bend of Calhoun's right elbow. Calhoun initially agreed to provide a urine sample, but later refused. He made several spontaneous statements while being booked about being high on meth "for the last five days."

At one point, Calhoun agreed to submit to a drug influence evaluation, but once they started he indicated he no longer wanted to participate and refused any further testing.

Calhoun pleaded not guilty to the fleeing and DWI charges on Feb. 7 in circuit court and on Feb. 10 a mental evaluation was ordered for him at the request of Garland County Public Defender Tim Beckham. On March 14, Calhoun was ruled fit to proceed with trial and his case was set for a disposition hearing on April 18 which was postponed until Monday.