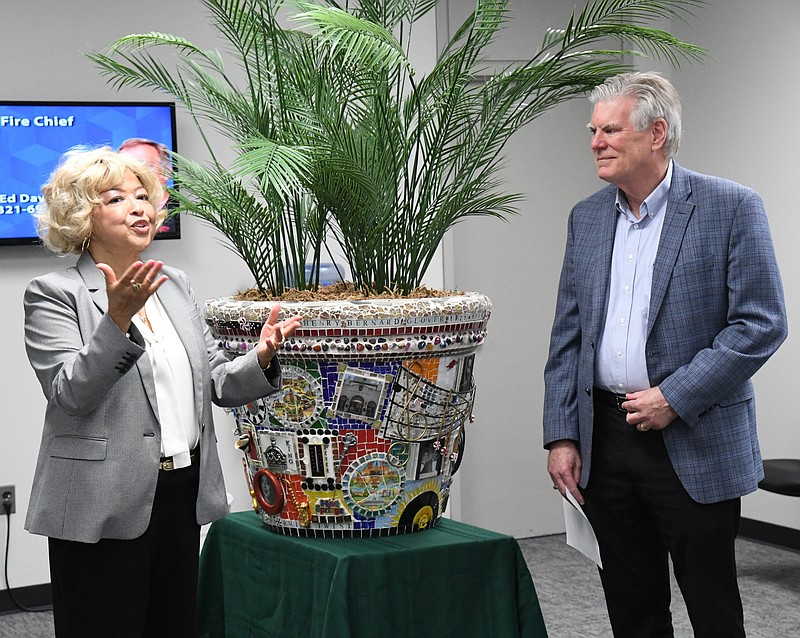 Sherry Glover Thompson, left, speaks at the unveiling of the planter that she donated to the city in honor of her father, Henry Glover, while Hot Springs Mayor Pat McCabe listens. - Photo by Tanner Newton of The Sentinel-Record

A year after the city dedicated Henry Glover Place Parklet in memory of the late Henry Bernard Glover, the noted Black songwriter, producer and performer from Hot Springs, his family has returned the honor by donating a custom-designed planter that depicts the mosaic of their family life in the Spa City.

Hot Springs dedicated the parklet during the 2021 Arts & The Park. On Friday, as part of the closing weekend of the 2022 festival, Glover's daughter, Sherry Glover Thompson, returned to town to donate the planter, created by Mosaic Madness, that honors her late father and their family.

The planter was unveiled Friday during an event at the city offices at 324 Malvern Ave., adjacent to the parklet, with speakers that included Thompson, artist Alice Mitchell, Hot Springs Mayor Pat McCabe, Liz Colgrove and City Manager Bill Burrough.

Thompson said she commissioned the planter because she wanted to honor her roots.

"Finding my roots and rediscovering my roots and the naturalness of all the different stones. There are diamonds, the quartz and then the bath houses. There are so many attractions that I thought would be to depict what the mosaic of our lives are like," Thompson said.

"And of course with my father, he had such a career in so many areas, and then I'm a fourth-generation Glover," she said, noting the Glover family arrived in Hot Springs in 1849.

"And I have a real interest in genealogy and family research. That's how it all came about," Thompson said.

Thompson liked that the city named Henry Glover Parklet after her father, she said. "They named the parklet after him and, all the type of honors that you don't think about, but when it's your hometown, it means more than all the accolades, the rock 'n' roll and all those big famous awards, because this really spells family and it really talks about returning to your roots."

The mosaic was created by Mosaic Madness owner Alice Mitchell. Thompson said she wanted a mosaic on the planter "because mosaics comprise of many different facets and I thought that would be the best way to talk about the city and talk about all his various experiences. He lived in New York. He worked in Cincinnati at King Records, and it was just an outstanding career, but unfortunately, he had gone into obscurity because the immediate family had passed away and I lived in Cincinnati and some other states, so I have been working with the Garland County Historical Society and they were very instrumental in me getting more research and finding out about the family."

"There aren't enough words to express. I knew it was going to be fantastic but this is just awesome and I really hope to see this many years from now and since it is going to be in a safe place, it will be enjoyed by many, many people, and I think it really represents the city and Hot Springs and all that you have given to us. It's a great town, love it," she said.

Mitchell said she became involved in this project after she received a visit from Thompson.

"She came by my studio and asked me about a year or so ago," Mitchell said. "She asked if I would be interested in doing an art piece to honor her dad.

"I'm happy to. I was honored that somebody would want me to do that and then she gave me free rein to make the mosaic the way I thought would work," she said.

While it took Mitchell a few weeks to assemble the mosaic on the planter, she said it took her several months to accumulate parts, noting, "I think it's great to honor someone who had such a contribution and of course, I'm happy to be a small part of it."

Anthony Whittington, Hot Springs Parks and Trails director, told The Sentinel-Record the planter will be housed in the lobby of the building.

"It's designed to be indoors, but we selected 324 Malvern to be near the Henry Glover (Parklet), which we dedicated last year," Whittington said.

While the planter will be indoors, Whittington said the public is welcome to come inside and see it.

"It's open Monday through Friday, people come in and pay their bills, their water bills, they go up to the second floor and pay their sales tax, alcohol permits, those kinds of things, but yeah, it's definitely going to get a lot of public view in this facility. That was one of our big decisions on having it at 324 Malvern," Whittington said.

"I was sent a video where somebody was turning it and it looked a lot smaller on video. You know, I saw it yesterday for the first time and was just amazed at the intricate design. How well it was designed, you know Alice did a great job. Definitely complements the beautiful flooring and what we have going in here already, so it's an amazing job, definitely tells the story of Mr. Glover's life for sure," he said.

"I think it is amazing. I saw videos of it online and it just didn't do it justice. The size of it just makes it all the more impressive, and we're going around, finding all the little Easter eggs of what Alice did her to represent (Glover's life)," Colgrove said. "Impressive is the only word I can come up with right now."

Colgrove noted this past weekend the festival held the second annual Henry Glover Songwriting Contest. "We had a really good response. It was hard narrowing down the entrants," she said.

The competition was won by Kimberly Hillestad. Tied for second place were Chloe Capaci and the band Memaw & The Squirrel Chasers.

Thompson said she is glad the city is continuing this contest.

"My father would have been so pleased because that was his main, out of all the things he had done and accomplished, he said that he enjoyed songwriting the best and of course, it was over a thousand songs and they've gone on and they've been recorded by many, many artists around the world, and that's the significance of the songwriting, especially the lyrical part of it, because he was very much in to the lyrics of music," she said.

The city's embracing of her father has been a humbling experience, Thompson said.

"I was beyond appreciative and grateful because I know he would have been beyond thanking and, it's a humbling experience because I don't know many folks who come out at this level and they are remembered and I think that he would just be so proud and so humbled. He loved Hot Springs as he imparted that to me, and I love Hot Springs as well," she said. 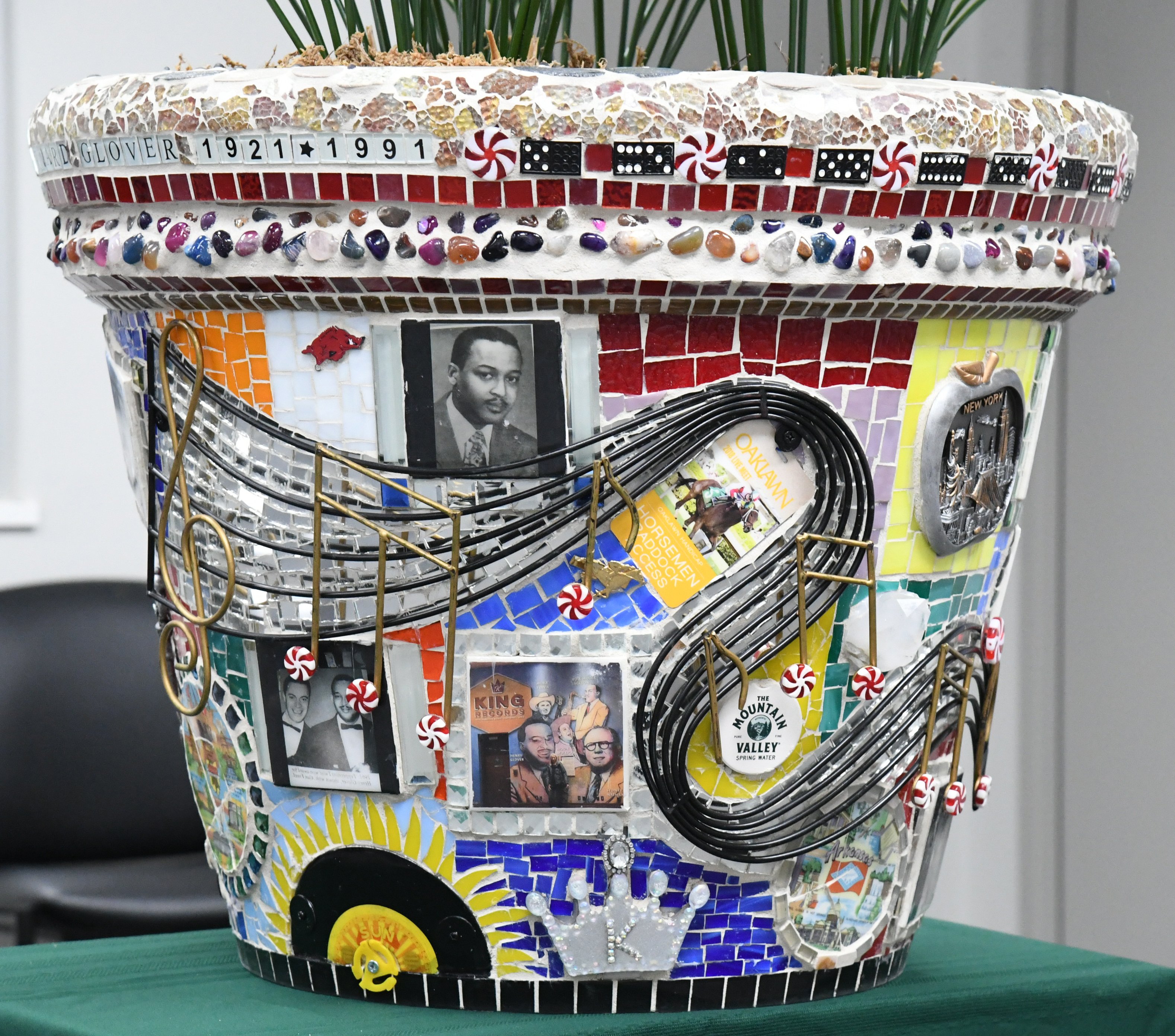 A planter that was decorated with a mosaic created by Alice Mitchell was donated to the city by Sherry Glover Thompson in honor of her father, musician Henry Glover. - Photo by Tanner Newton of The Sentinel-Record 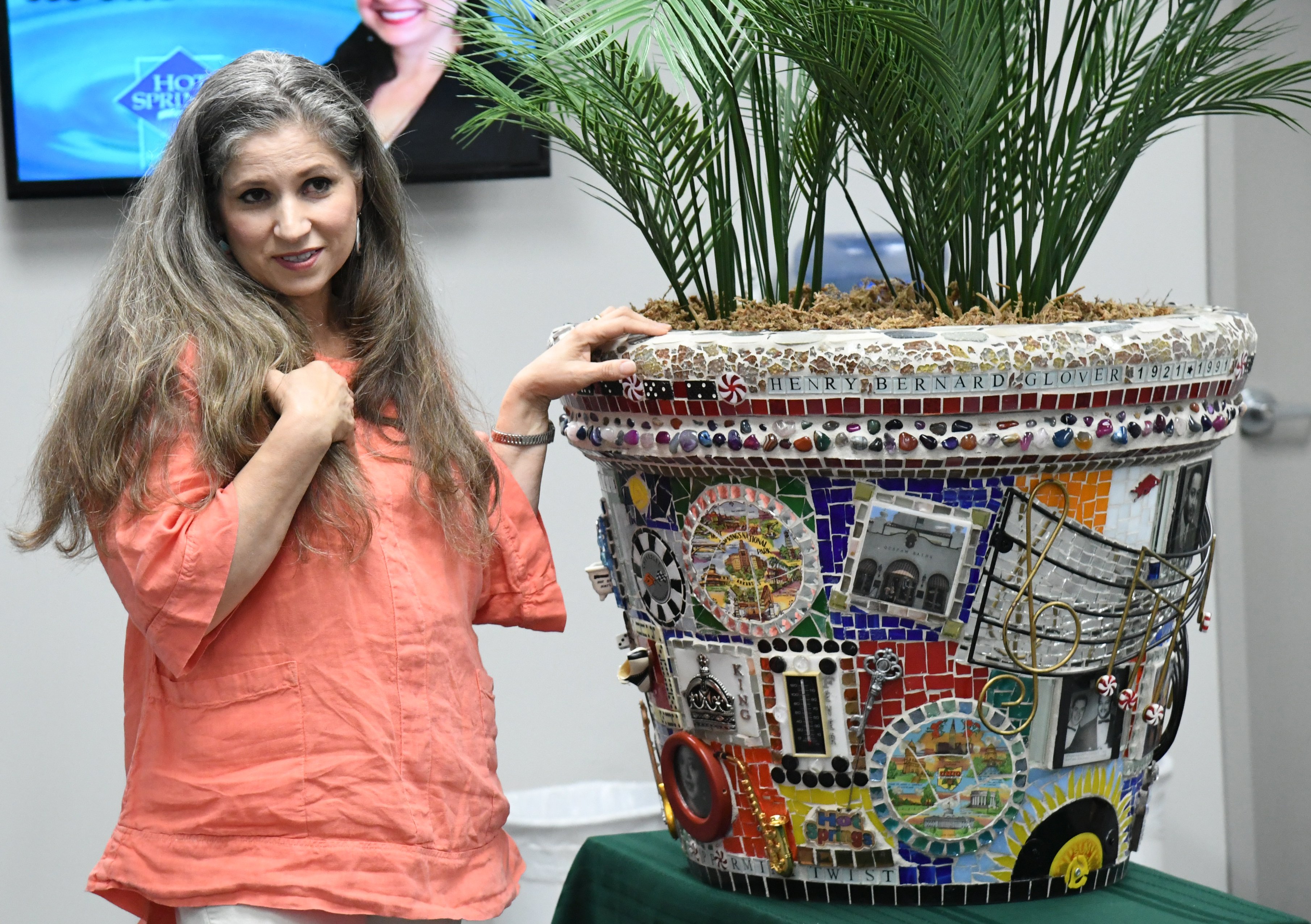 Artist Alice Mitchell speaks about creating the Henry Glover mosaic planter at its unveiling at 324 Malvern Ave. - Photo by Tanner Newton of The Sentinel-Record