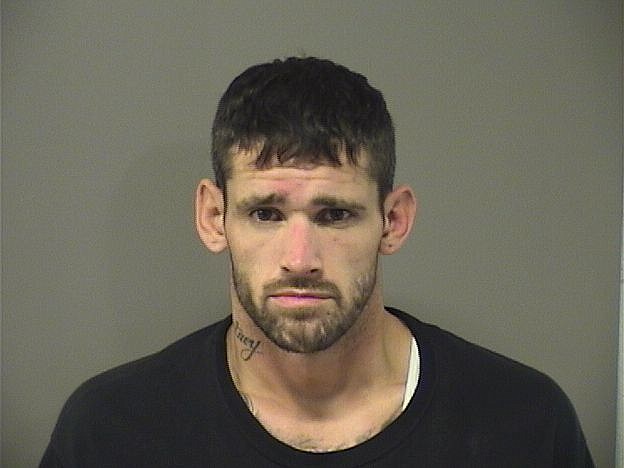 A Hot Springs man was sentenced to seven years and eight months in federal prison last week, followed by three years of supervised release, for being a felon in possession of a firearm in 2020.

Derek Christopher Lowrey, 35, was an absconder on parole on Sept. 4, 2020, when he was arrested after fleeing from Hot Springs police on a stolen motorcycle and then caught with a loaded gun. He had several prior felony convictions which prohibited him from possessing any firearms.

He had previously pleaded guilty to the charge in U.S. District Court in Hot Springs and was sentenced Wednesday by Judge Susan O. Hickey, with Assistant U.S. Attorney Kenneth Elser prosecuting the case.

On Sept. 4, around 10:25 a.m., Hot Springs police Officer Robert Plyler spotted the motorcycle in the area of West Grand Avenue and Fifth Street traveling westbound at a high rate of speed, turning onto Summer Street and then onto Albert Pike. He activated his lights and siren to make a traffic stop and caught up to the motorcycle as it died at Albert Pike and Airport Road.

The rider, later identified as Lowrey, started pushing the motorcycle through the parking lot of Walgreens at the intersection and was able to get it started again and fled north on Mason Street. Plyler eventually lost sight of it but noted the driver ran several stop signs and showed "no regard for the safety of others."

Sanitation workers reported seeing the motorcycle pass where they were working on Wood Street and turn onto Lacey Street. At the intersection of Lacey and Albert Pike, Plyler saw Lowrey pushing the motorcycle again and activated his lights and siren again to stop him.

Lowrey tried to push start the motorcycle again, but Plyler blocked him in, got out of his unit and ordered Lowrey to get on the ground. Lowrey fled on foot as Plyler deployed his Taser, striking Lowrey, but he continued running.

At one point, Lowrey ran around Plyler's unit into the middle of Albert Pike where Plyler was able to force him onto the ground and arrest him. During a search of Lowrey's person, Plyler found a loaded .380 automatic handgun in his pocket.

In Lowrey's other pocket, the officer found a "wallet-type" leather pouch that contained numerous baggies with meth residue and in another shoulder bag Lowrey was carrying he found a glass smoking pipe with residue and digital scales.

When questioned about the motorcycle, Lowrey said he bought it from a friend for $400, but admitted he knew it was stolen when he bought it.