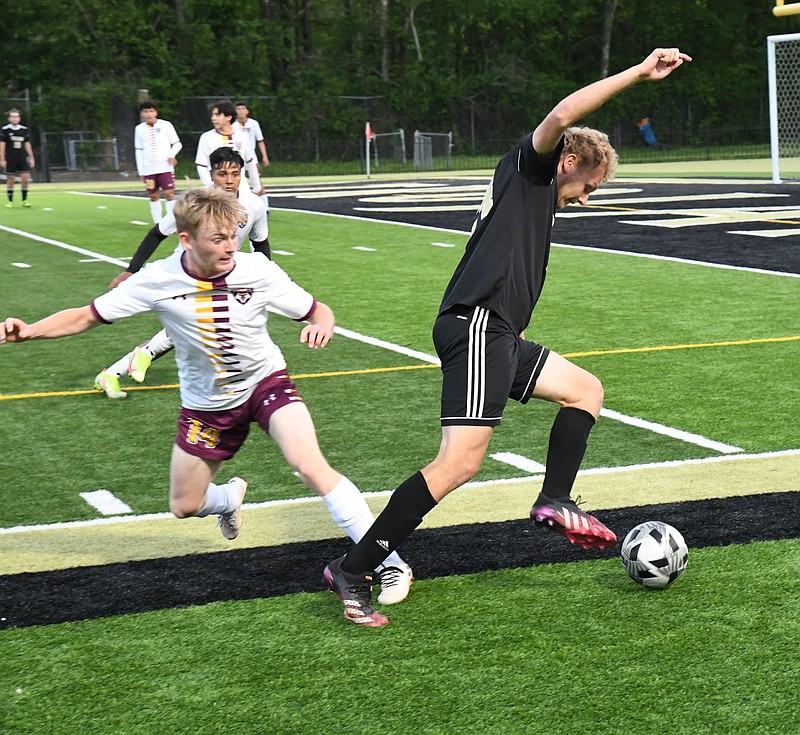 Hot Springs' Lucas Fuhrman (24) steals the ball from Lake Hamilton's Michael Lyford (14) Lake Hamilton April 26. Both schools, along with Lakeside, competed in the Class 5A state soccer tournaments in El Dorado Thursday. - Photo by Tanner Newton of The Sentinel-Record

Hot Springs pulled off an upset in the opening round of the Class 5A boys state soccer tournament when the Trojans beat Searcy 2-1 in El Dorado Thursday.

Hot Springs, Lakeside and Lake Hamilton all ended the regular season with a 10-2-2 conference record, but the Trojans got the third seed and the hardest first-round matchup on paper. However, Hot Springs was up to the task.

"We just came out the way we've been playing all year," Hot Springs head coach Geoffrey Hedrick said. "We just tried to put high pressure on the ball wherever it was on the field and just tried to make things happen off that."

The Trojans have been able to create opportunities in the attacking third all year but have also had trouble finishing the chances they create. Hedrick said that was a problem once again against the Lions Thursday.

"We had several opportunities," he said. "We just, we've had problems finishing all year."

While Hot Springs is a quick team that plays with intensity, Searcy brought a lot of size to the field.

"They were very, very big and very physical," Hedrick said. "You know, our team isn't blessed with size but we're scrappy. We just made it a fight."

Carlos Garduno opened the scoring for the Trojans, but Searcy responded to tie the match at 1-1.

"We got a good one then we got complacent," Hedrick said. "Didn't mark up for a second."

However, sophomore Brayan Yanes came up big for Hot Springs to get the winning goal.

Both teams dealt with high temperatures on the field and after a tough match, the heat could affect the Trojans again in their game with Russellville today.

"It was brutally hot," Hedrick said. "We had guys vomiting. We've got several heat casualties. We just hope we can get healthy for tomorrow."

Hedrick emphasized just how much of a factor the heat was on the match.

"Oh I would say it was huge," he said. "I don't think they had as deep of a bench as we did. I know they had guys throwing up also. I think (today's) going to be even tougher."

The Trojans take on the No. 1 seed from the 5A-West in Russellville today at noon with a trip to the state semifinals on the line.

Russellville's only loss this season came in a 1-0 defeat on the road at Siloam Springs, a team the Cyclones beat 4-1 in the reverse fixture.

Despite Russellville's great record, Hedrick likes his team's chances today as long as the Trojans can finish the opportunities they create.

"I would like to see everything that we've done all season long just capped off with some finishing," Hedrick said. "If we can do that, I think we have a decent chance. I think we've got as good a chance as anybody."

In other Garland County action Thursday, No. 2 Lakeside beat No. 3 Batesville 5-1 in the boys bracket.

"We got started a little slow but our defense played really well and kept us in there," Lakeside head coach Craig Moses said. "It just kind of opened up for us offensively about midway through -- really about the end of the first half. Then in the second half it opened up a lot more."

With the win, Lakeside advanced to the second round and will play Little Rock Christian, the No. 1 seed from the 5A-Central. The match between the Rams and Warriors kicks off at noon today.

No. 2 Lakeside handled No. 3 Greene County Tech 6-1 in the girls bracket to advance to the second round.

"McKenna Wright had two assists to Lauren (Latham) early," Moses said. "Lauren had a hat trick today. Lalita Fry had two goals and Abby Thomas had a goal. It was really just a good battle for us. We played really well defensively."

The Lady Rams will also take on No. 1 Little Rock Christian. The Lady Rams and Lady Warriors take the field today at 10 a.m.

"It's going to be another battle," Moses said. "They're very talented. They're a very well respected program within their girls program. Our girls are excited to play them. It is definitely going to be a battle for our girls."

Also in the girls bracket Thursday, No. 3 Hot Springs suffered an 8-2 defeat at the hands of No. 2 Jonesboro.

EL DORADO -- Lake Hamilton advanced past Greene County Tech 6-0 in the first round of the 5A boys state soccer tournament Thursday at Memorial Stadium. The Wolves scored five goals in the second half.

Paul Gonzalez opened the scoring at the 24:24 mark of the first half with a low left-footed shot past the keeper.

Greene County Tech's goalkeeper made five saves in the first half.

The Wolves seized control immediately after intermission. Miguel Salazar began the onslaught with a low shot past the keeper at the 39:03 mark. Larry Morales scored at the 16:07 mark followed by Salazar's second goal. Andy Duran scored with 9:34 remaining and Gonzalez struck again at the 3:34 mark.