Rich Strike out of Preakness, looks at Belmont 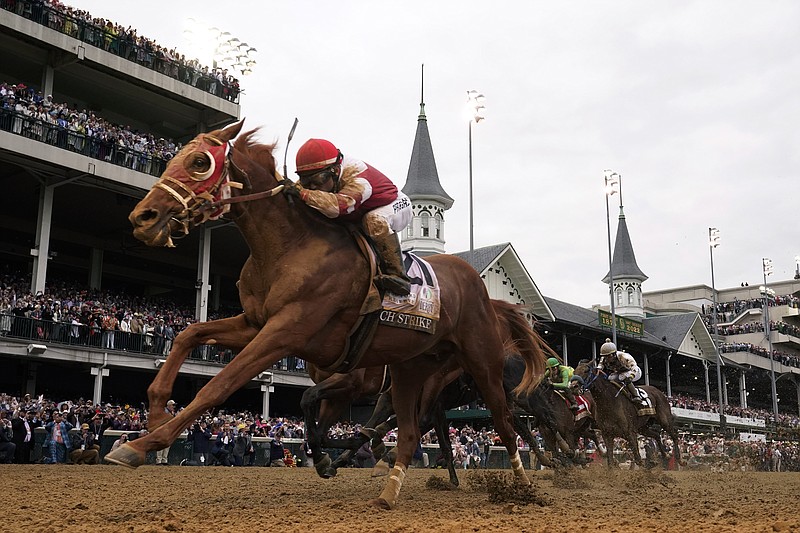 Rich Strike (21), with Sonny Leon aboard, wins the 148th running of the Kentucky Derby at Churchill Downs Saturday in Louisville, Ky. - Photo by Jeff Roberson of The Associated Press

Rich Strike, last horse in the Kentucky Derby field but first across the finish line, is out of the Preakness, middle jewel of the Triple Crown.

The 80-1 surprise winner of Derby 148 on Saturday will skip the May 21 race at Pimlico in Baltimore with an eye on the June 12 Belmont Stakes in New York.

"Our original plan for Rich Strike was contingent on the Kentucky Derby; should we not run in the Derby we would point toward the Preakness, should we run in the Derby, subject to the race outcome and the condition of our horse, we would give him more recovery time and rest and run in the Belmont, or another race and stay on course to run with five or six weeks rest between races.

"Obviously, with our tremendous effort and win in the Derby it's very, very tempting to alter our course and run in the Preakness at Pimlico, which would be a great honor for all our group; however, after much discussion and consideration with my trainer, Eric Reed and a few others, we are going to stay with our plan of what's best for Ritchie is what's best for our group, and pass on running in the Preakness, and point toward the Belmont in approximately five weeks.

"We thank the wonderful Preakness and Pimlico folks that have reached out to us and very much appreciate the invite.

The last healthy Derby winner to bypass the Preakness was Spend a Buck in 1985, instead lured to the Jersey Derby by a $2 million bonus. Country House, elevated to first place upon Maximum Security's disqualification in the 2019 Derby, exited the race with an illness and never raced again. Also in 1996, Grindstone emerged from his Derby win with a leg injury and never raced again.

With Sonny Leon aboard, Rich Strike won the Derby by three quarters of a length over favored Epicenter with morning-line choice Zandon third. The Keen Ice colt earned a Derby spot on the eve of the race after Hall of Fame trainer Wayne Lukas scratched Ethereal Road. Rich Strike, claimed for $30,000 by Reed out of his only previous victory, a one-turn mile at Churchill Downs last September, won from the No. 20 post position and paid $163.60 to win, second-highest return in race history.

Preakness probables include Epicenter, the leading points qualifier for the Derby but unable to bring Hall of Fame trainer Steve Asmussen his first race win in 24 tries, and Kentucky Oaks-winning filly Secret Oath, third against males in Oaklawn's Grade 1 Arkansas Derby April 2 after winning three times against her gender in Hot Springs. Also going, according to a published report, is Un Ojo, the one-eyed winner at 75-1 of Oaklawn's Grade 2 Rebel Feb. 26 who was scratched from the Derby because of a minor foot bruise. Trainer Ricky Courville plans a workout at Churchill Downs on Saturday for Un Ojo, who placed second in the Withers at Aqueduct for trainer Tony Dutrow before surprising at Oaklawn.