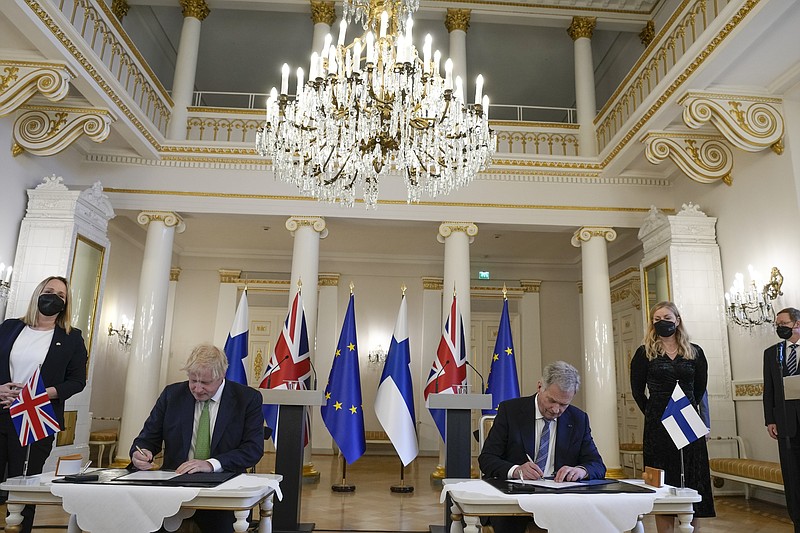 KYIV, Ukraine -- Finland's leaders Thursday came out in favor of applying to join NATO, and Sweden could do the same within days, in a historic realignment on the continent 2 1/2 months after Russian President Vladimir Putin's invasion of Ukraine sent a shiver of fear through Moscow's neighbors.

The Kremlin reacted by warning it will be forced to take retaliatory "military-technical" steps.

On the ground, meanwhile, Russian forces pounded areas in central, northern and eastern Ukraine, including the last pocket of resistance in Mariupol, as part its offensive to take the industrial Donbas region, while Ukraine recaptured some towns and villages in the northeast.

The first war-crimes trial of a Russian soldier since the start of the conflict is set to open Friday in Kyiv. A 21-year-old captured member of a tank unit is accused of shooting to death a civilian on a bicycle during the opening week of the war.

Finland's president and prime minister announced that the Nordic country should apply right away for membership in NATO, the military defense pact founded in part to counter the Soviet Union.

"You (Russia) caused this. Look in the mirror," Finnish President Sauli Niinisto said this week.

While the country's Parliament still has to weigh in, the announcement means Finland is all but certain to apply -- and gain admission -- though the process could take months to complete. Sweden, likewise, is considering putting itself under NATO's protection.

That would represent a major change in Europe's security landscape: Sweden has avoided military alliances for more than 200 years, while Finland adopted neutrality after its defeat by the Soviets in World War II.

Public opinion in both nations shifted dramatically in favor of NATO membership after the invasion, which stirred fears in countries along Russia's flank that they could be next.

Such an expansion of the alliance would leave Russia surrounded by NATO countries in the Baltic Sea and the Arctic and would amount to a stinging setback for Putin, who had hoped to divide and roll back NATO in Europe but is instead seeing the opposite happen.

NATO Secretary-General Jens Stoltenberg has said the alliance would welcome Finland and Sweden with open arms.

Russia's Foreign Ministry warned that Moscow "will be forced to take retaliatory steps of military-technical and other characteristics in order to counter the emerging threats to its national security."

NATO's funneling of weapons and other military support to Ukraine already has been critical to Kyiv's surprising success in stymieing the invasion, and the Kremlin warned anew in chilling terms Thursday that the aid could lead to direct conflict between NATO and Russia.

"There is always a risk of such conflict turning into a full-scale nuclear war, a scenario that will be catastrophic for all," said Dmitry Medvedev, deputy head of Russia's Security Council.

While Russia's advance in the Donbas has been slow, its forces have gained some ground and taken some villages.

Four civilians were killed Thursday in three communities in the Donetsk region, which is part of the Donbas, the regional governor reported.

Britain's Defense Ministry said Russia's focus on the Donbas has left its remaining troops around the northeastern city of Kharkiv vulnerable to counterattack from Ukrainian forces, which recaptured several towns and villages around the city.

The attacks also damaged a building housing a humanitarian aid unit, municipal offices and hospital facilities, Vyacheslav Zadorenko, the mayor of the suburban town of Derhachi, wrote in a Telegram post.

None of the sites "had anything to do with military infrastructure," Zadorenko said.

Fighting across the east has driven many thousands of Ukrainians from their homes.

"It is terrible there now. We were leaving under missiles," said Tatiana Kravstova, who left the town of Siversk with her 8-year-old son Artiom on a bus headed for the central city of Dnipro. "I don't know where they were aiming, but they were pointing at civilians."

Ukraine also said Russian forces had fired artillery and grenade launchers at Ukrainian troops around Zaporizhzhia, which has been a refuge for civilians fleeing Mariupol, and attacked in the Chernihiv and Sumy regions to the north.

Overnight airstrikes near Chernihiv, in northern Ukraine, killed at least three people, Ukraine's military said. It said that Russian troops fired rockets at a school and student dormitory in Novhorod-Siversky and that some other buildings, including private homes, were also damaged.

In his evening address to the nation, Ukrainian President Volodymyr Zelenskyy condemned the assaults.

"Of course, the Russian state is in such a state that any education only gets in its way. But what can be achieved by destroying Ukrainian schools? All Russian commanders who give such orders are simply sick and incurable."

Noting that Thursday is International Nurses Day, Zelenskyy said the Russian military had damaged 570 medical facilities since the invasion began on Feb. 24 and fully destroyed 101 hospitals.

Twelve Russian missiles struck an oil refinery and other infrastructure in the central Ukrainian industrial hub of Kremenchuk on Thursday, the region's acting governor, Dmytro Lunin, wrote in a Telegram post. In early April, he said, the refinery, which had been the last fully functional one in Ukraine at the time, was knocked offline by an attack.

In the southern port of Mariupol, which has largely been reduced to smoking rubble with little food, water or medicine, or what the mayor called a "medieval ghetto," Ukrainian fighters continued to hold out at the Azovstal steel plant, the last stronghold of resistance in the city.

Ukrainian Deputy Prime Minister Iryna Vereshchuk said negotiations were underway with Russia to win the release of 38 severely wounded Ukrainian defenders from the plant. She said Ukraine hoped to exchange them for 38 "significant" Russian prisoners of war.

Yesica Fisch in Bakhmut, David Keyton in Kyiv, Yuras Karmanau in Lviv, Mstyslav Chernov in Kharkiv, Jari Tanner in Helsinki, and other AP staffers around the world contributed. 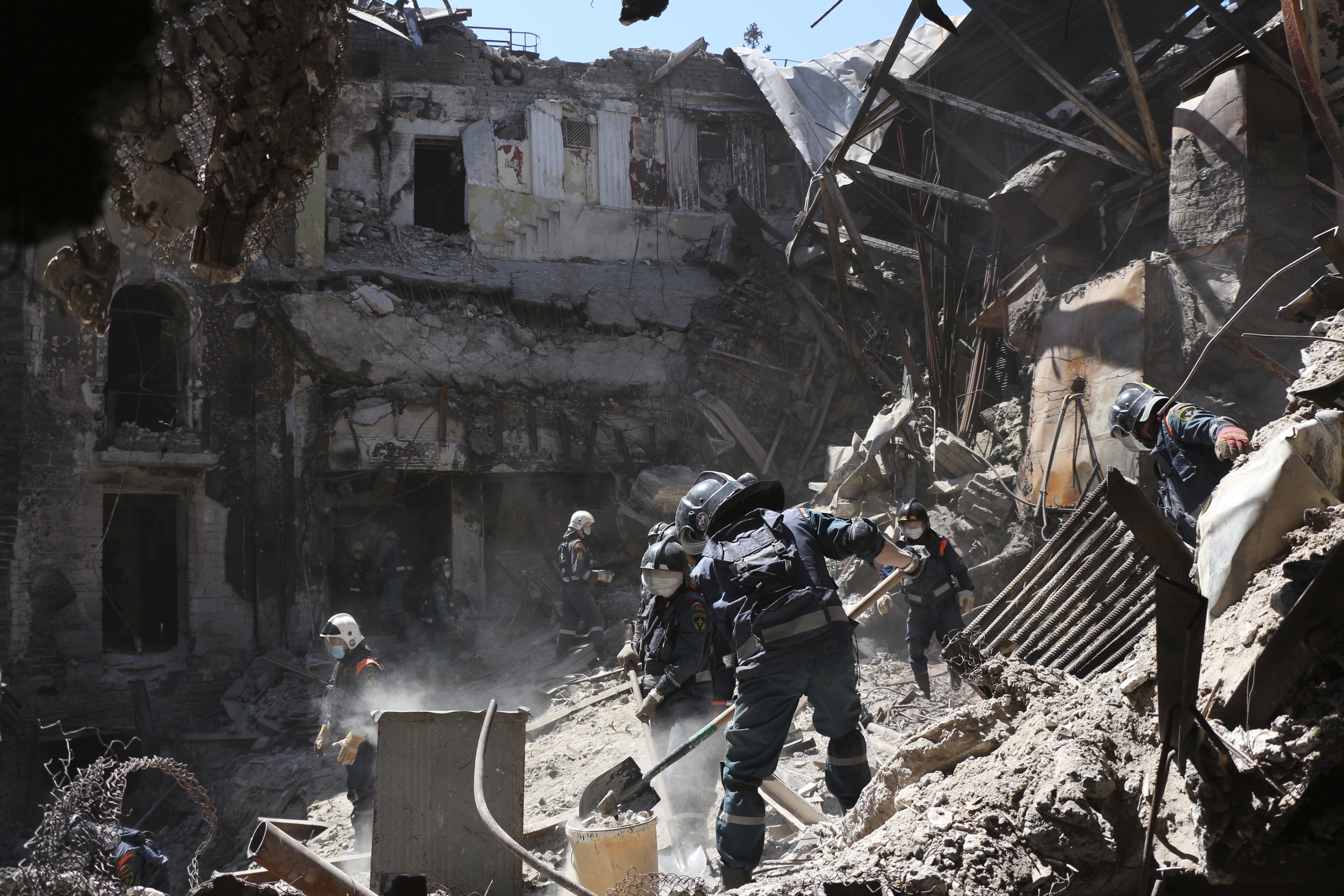 The Associated Press Donetsk People Republic Emergency Situations Ministry employees clear rubble at the side of the damaged Mariupol theater building during heavy fighting in Mariupol, in territory under the government of the Donetsk People's Republic, eastern Ukraine, on Thursday. 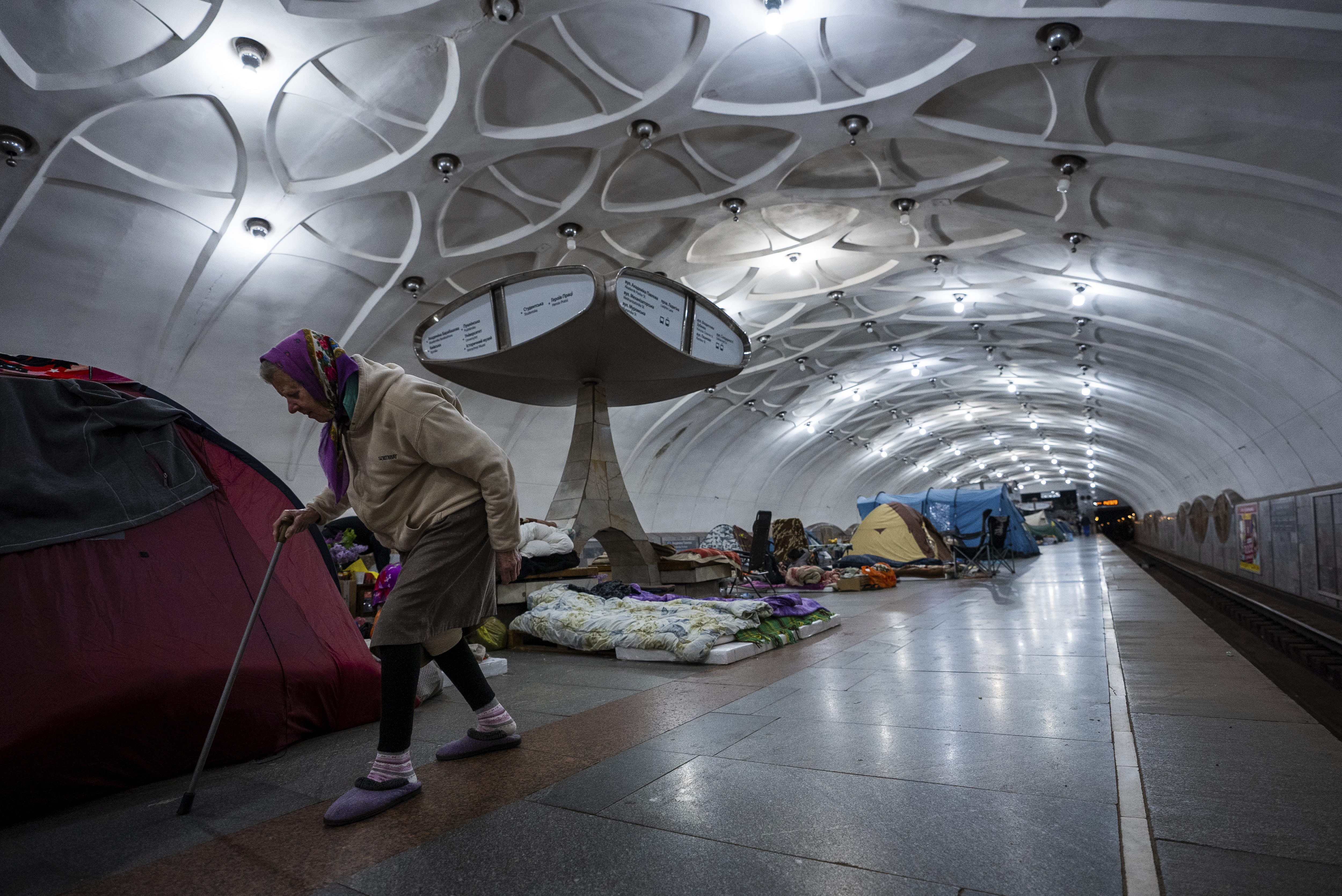 An elderly woman walks inside a metro station being used as a bomb shelter in Kharkiv, Ukraine, Thursday, May 12, 2022. (AP Photo/Mstyslav Chernov) 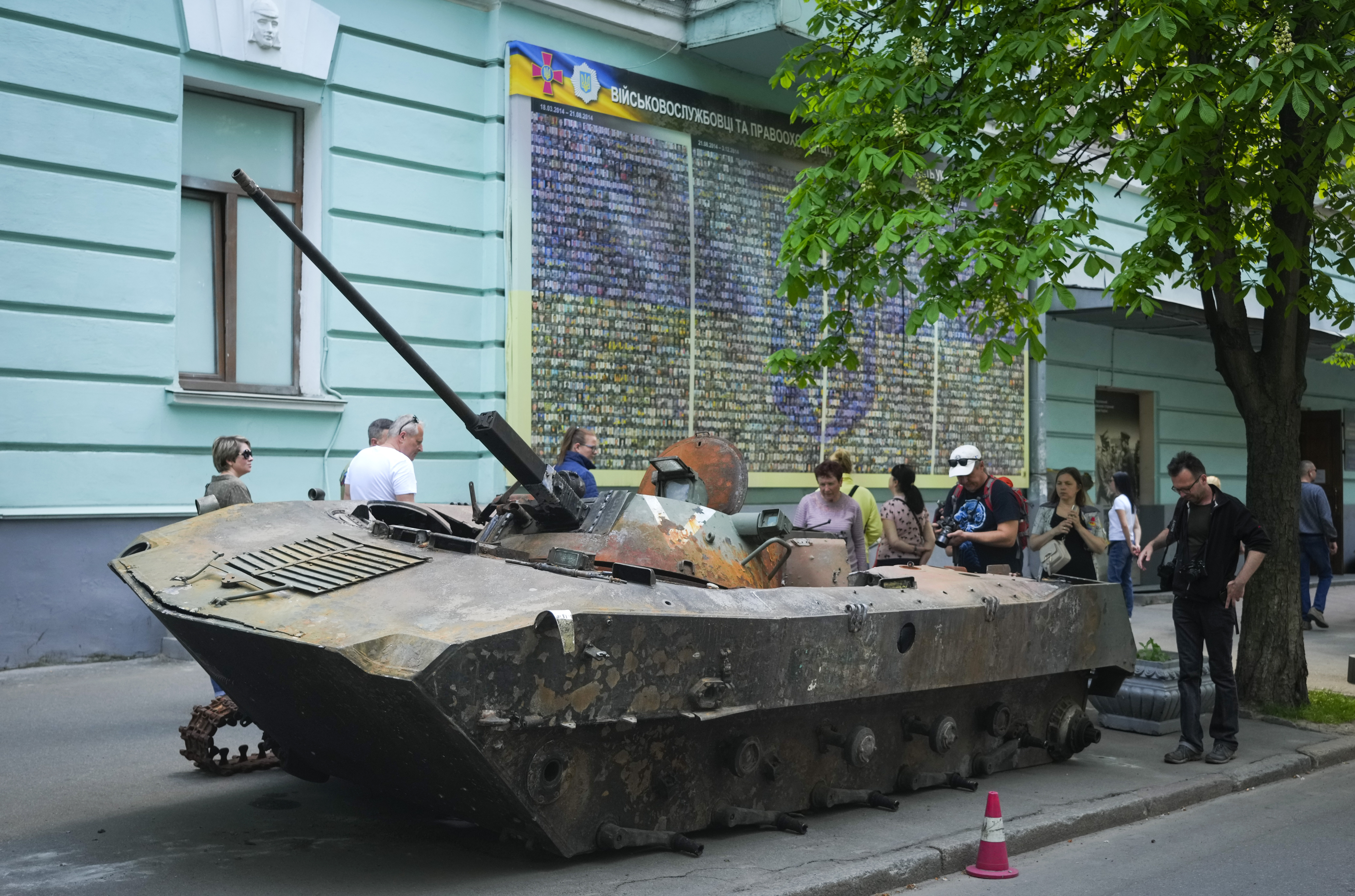 People look at a Russian military vehicle destroyed by the Ukrainian troops in a battle against the Russian invaders and taken to the capital as a reminder of war in Kyiv, Ukraine, Thursday, May 12, 2022.(AP Photo/Efrem Lukatsky) 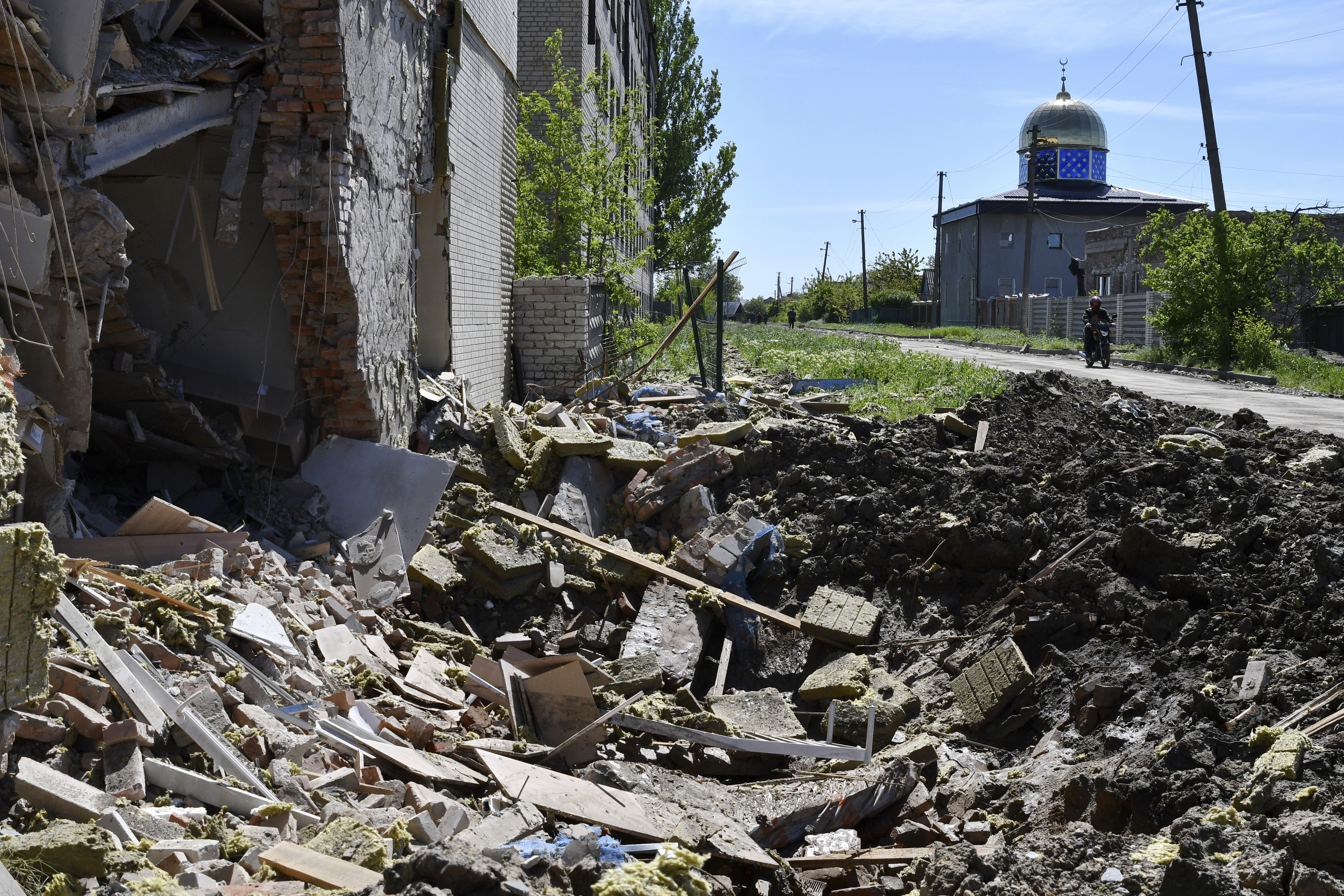 A crater of an explosion after Russian shelling is seen next to a damaged apartment building in Bakhmut, Donetsk region, Ukraine, Thursday, May 12, 2022. (AP Photo/Andriy Andriyenko) 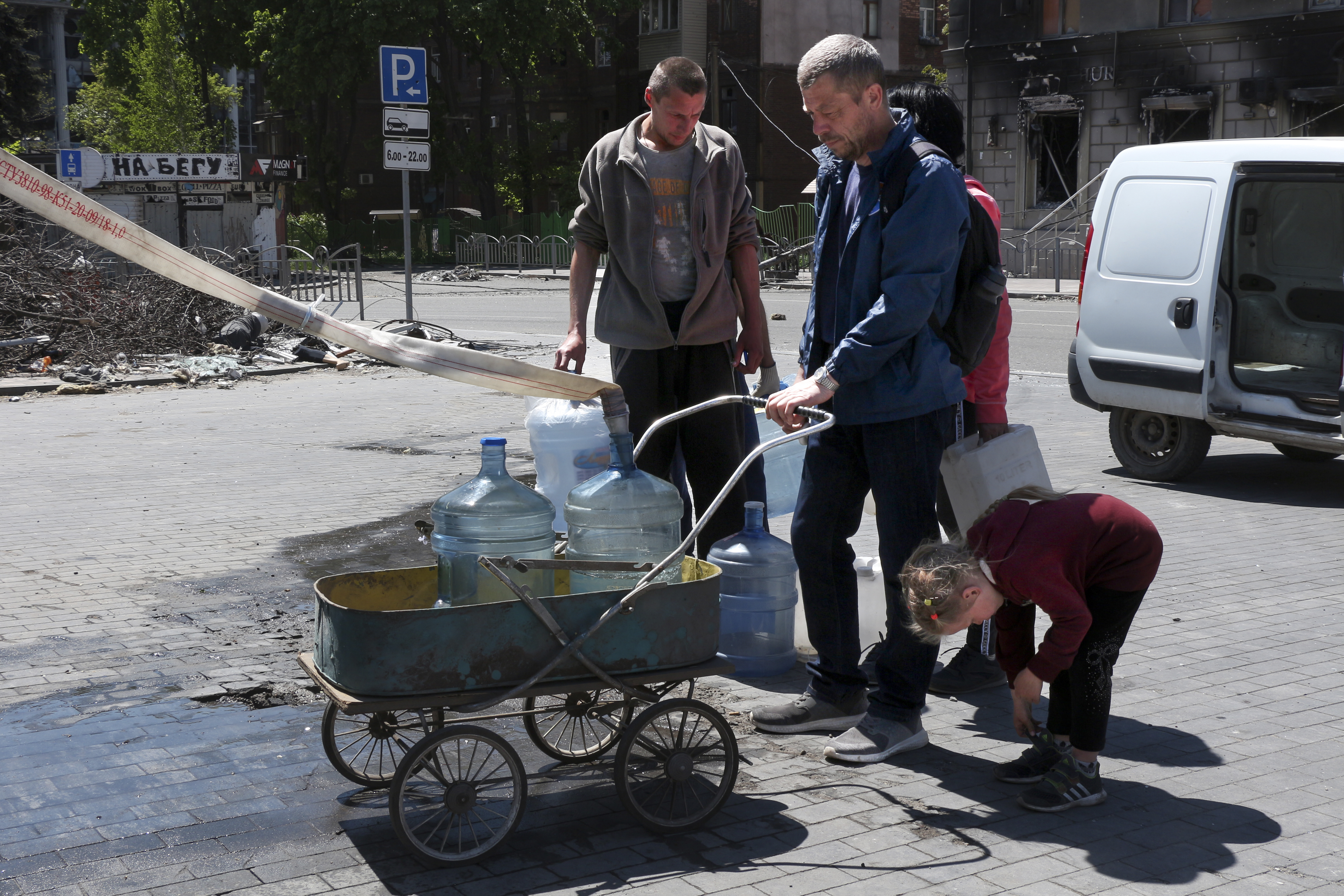 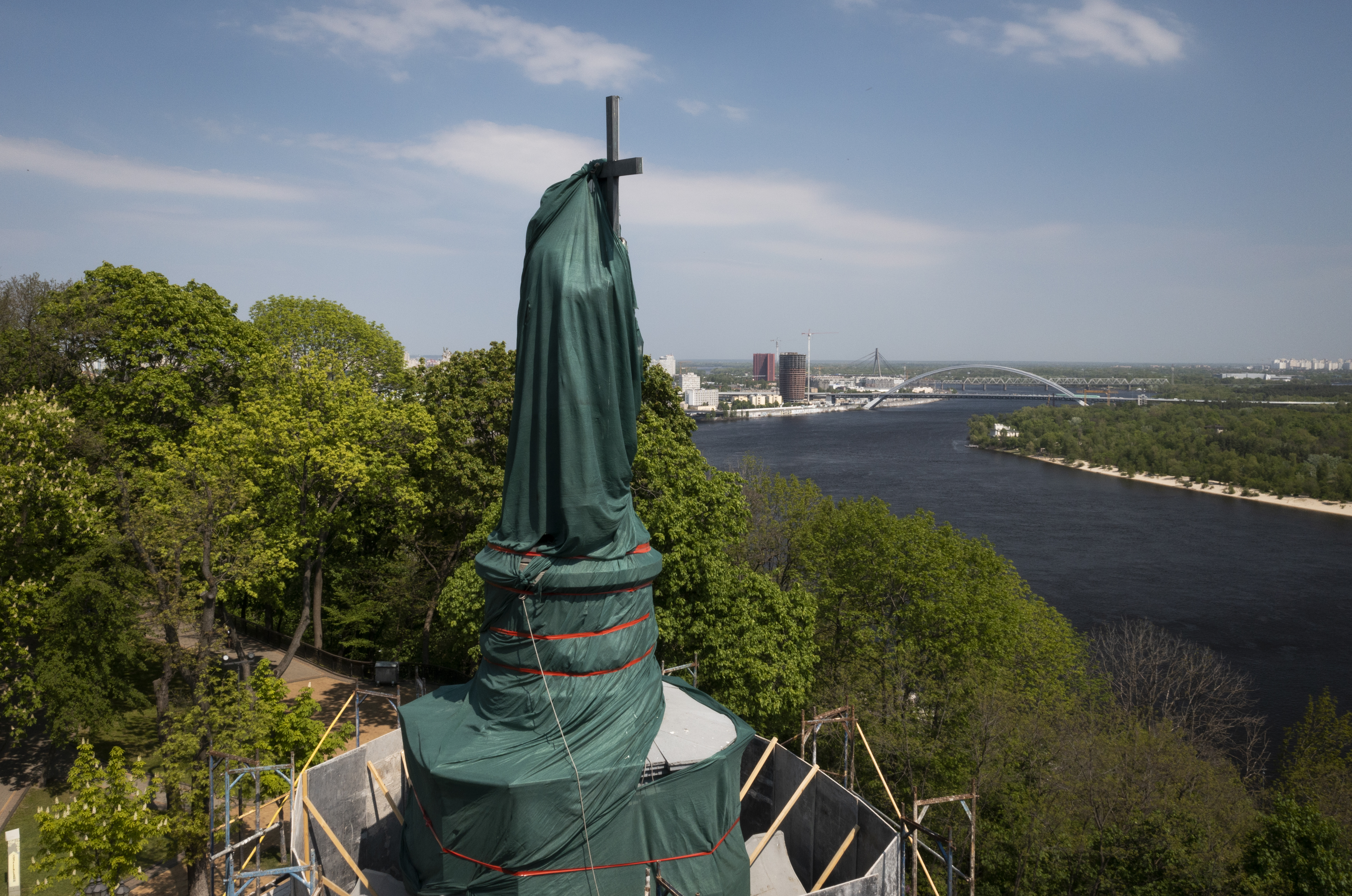 A early 200-year old monument to legendary Prince Volodymyr, a Kyiv landmark and one of the symbols of the Ukrainian capital, is wrapped to protect it from Russian shelling in Kyiv, Ukraine, Thursday, May 12, 2022. (AP Photo/Efrem Lukatsky) 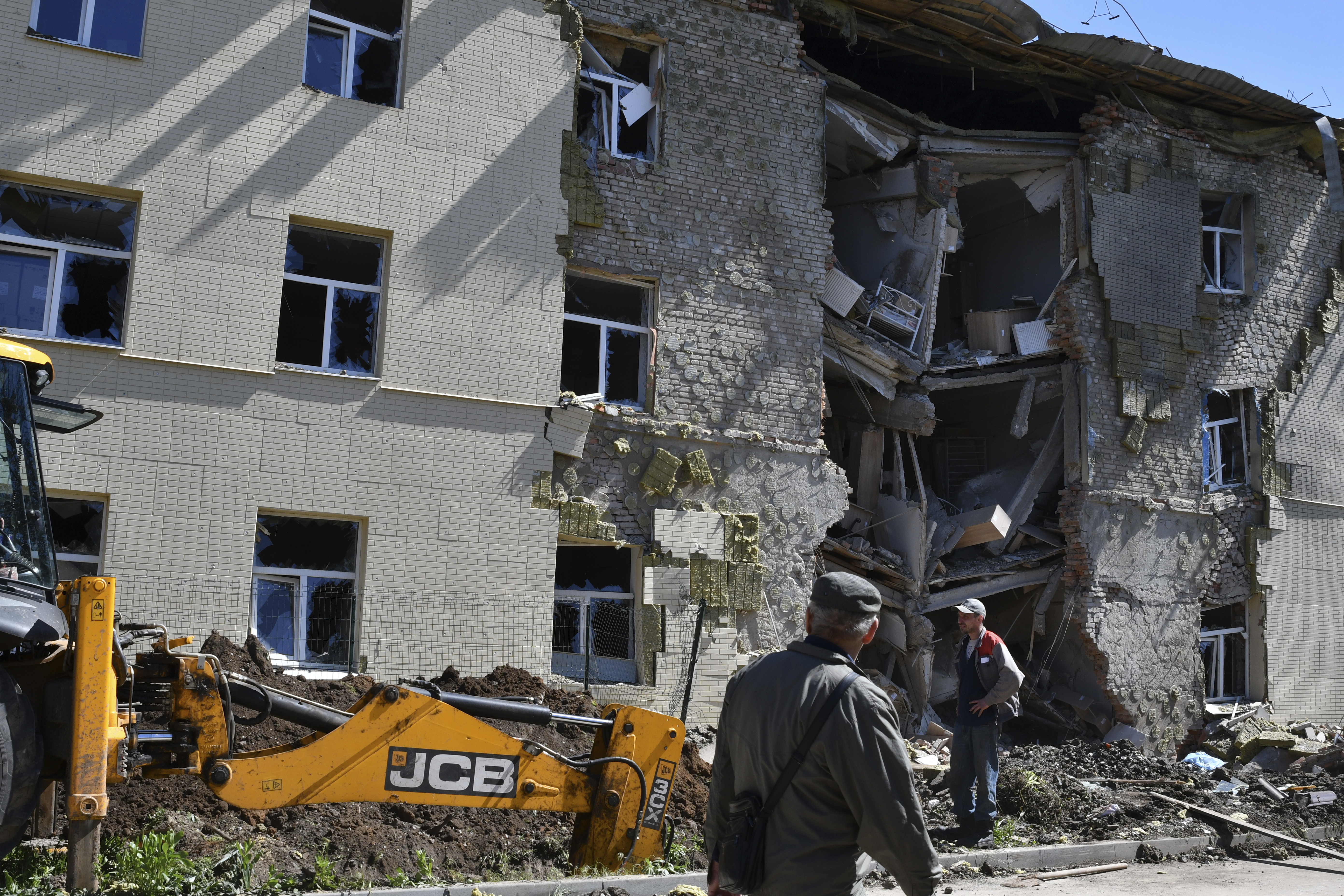 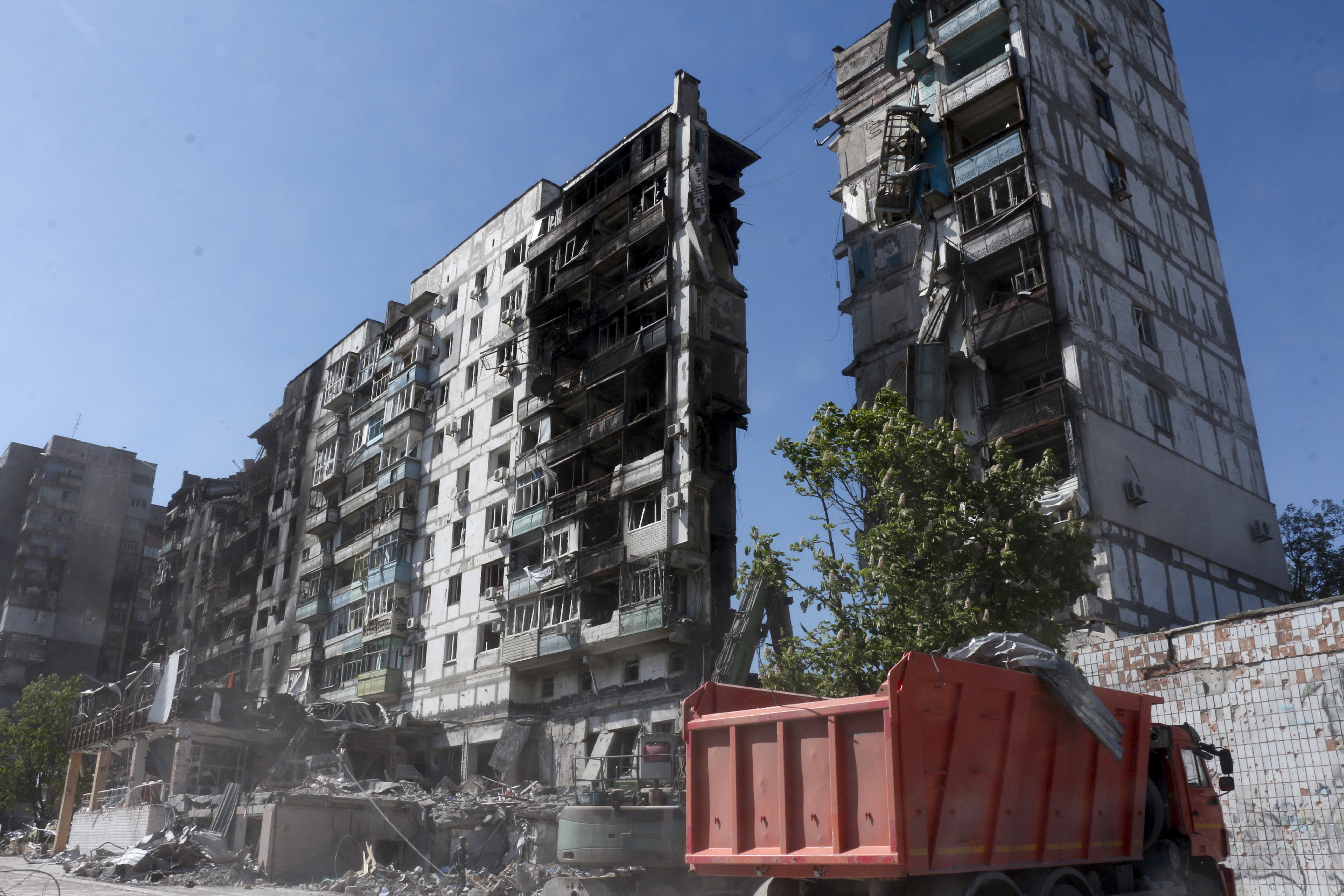 Donetsk People Republic Emergency Situations Ministry employees clear rubble at the side of damaged during a heavy fighting buildings in Mariupol, in territory under the government of the Donetsk People's Republic, eastern Ukraine, Thursday, May 12, 2022. (AP Photo) 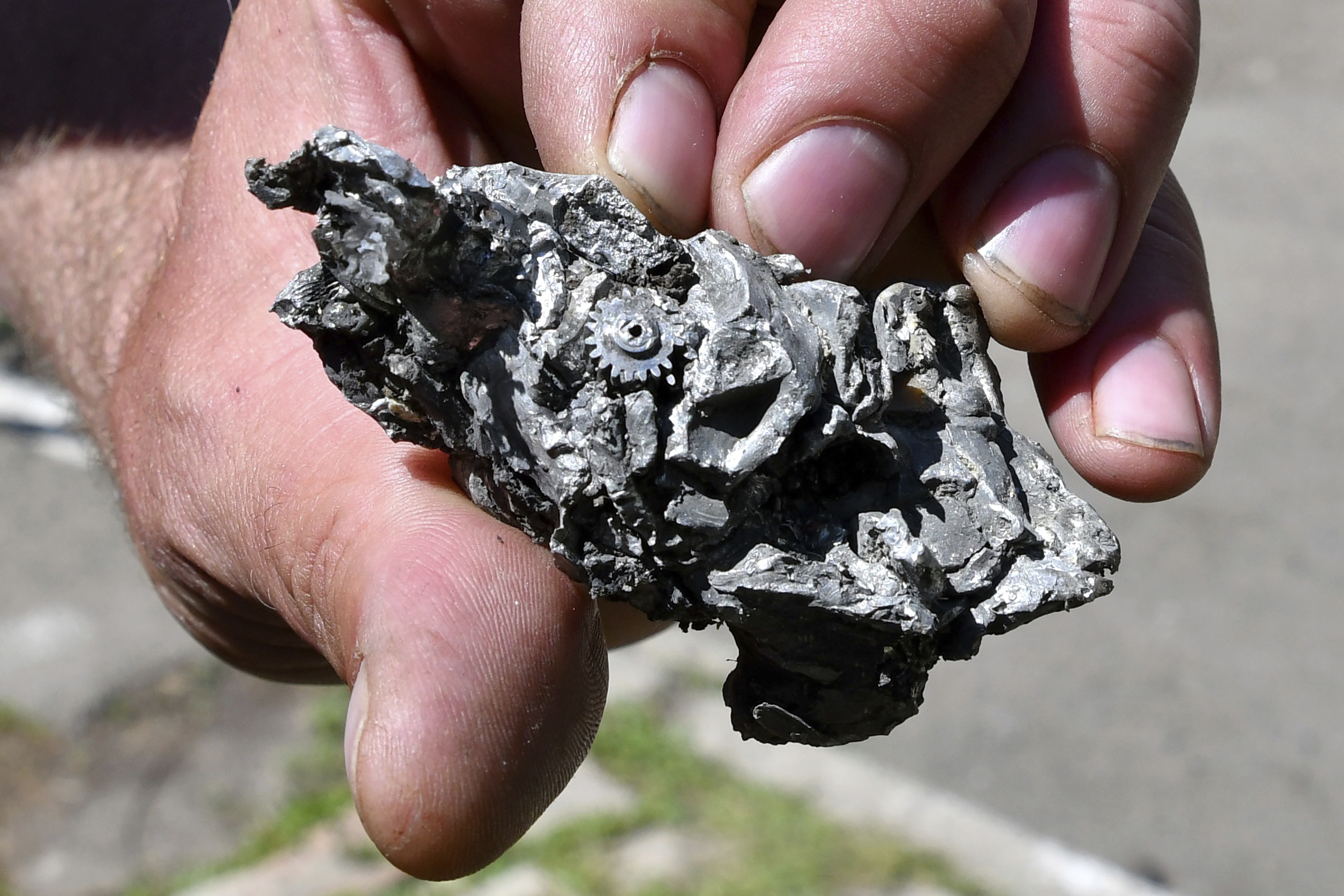 A man shows a part of a missile found in a residential area after Russian shelling in Bakhmut, Donetsk region, Ukraine, Thursday, May 12, 2022. (AP Photo/Andriy Andriyenko)