Americans bet $125B on sports in 4 years since legalization 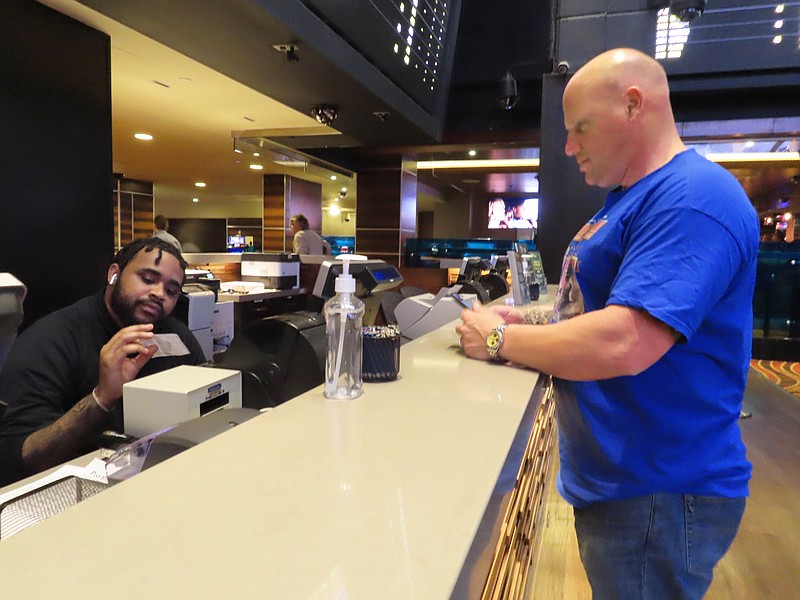 A customer cashes a winning ticket on a New York Mets baseball game in the sports betting lounge at the Tropicana casino in Atlantic City, N.J., on Thursday. American gamblers have wagered over $125 billion on sports with legal betting outlets in the four years since the U.S. Supreme Court cleared the way for all 50 states to offer legal sports betting; about two-thirds currently do. - Photo by Wayne Parry of The Associated Press

ATLANTIC CITY, N.J. -- Americans have bet more than $125 billion on sports with legal gambling outlets in the four years since a U.S. Supreme Court ruling cleared the way for all 50 states to offer it.

On Saturday's anniversary of the decision in a case brought by New Jersey, two-thirds of the states in the country have legalized sports betting.

In just four years, the industry has worked itself into the daily lives of millions of Americans -- from those who plunk down money hoping for a certain outcome to those who watch TV broadcasts with odds calculations to those struggling with gambling problems.

You don't have to be a gambler -- or even a sports fan -- to be affected: The industry tsunami of advertising is practically impossible to avoid, particularly on TV and radio but in other media as well. For example, FanDuel is the official odds provider for The Associated Press.

On May 14, 2018, the Supreme Court decided a case that had begun 10 years earlier in New Jersey as the longest of long shots: a bid to overturn a federal law, the Professional and Amateur Sports Protection Act, that restricted sports betting to just four states that met a 1991 deadline to legalize it.

Ray Lesniak, the now-retired state senator who filed the first lawsuit against the federal government over the issue, said he acted to provide money for states, protection for consumers and to attract experienced European betting companies to expand to the U.S. -- all of which he said have come to pass.

"I made a good bet for New Jersey and for America," he said, metaphorically speaking. (Lesniak also placed the first winning legal sports bet in his state, correctly picking France to win soccer's World Cup, winning $400 on a $50 bet at 8-to-1 odds.)

"When PASPA was repealed, I don't think any of us would have expected how big the (industry) would be just four short years later," said Karol Corcoran, general manager of FanDuel's online sportsbook.

DraftKings president and co-founder Matt Kalish said: "I got into this industry because I was always the kind of kid who liked to predict things, to compete with my friends and make predictions. For people that like to do that, sports betting has become far and away the No. 1 thing."

To comprehend just how much $125 billion is, consider this: It's a bit more than the amount that was spent on pet food, supplies and veterinary care in the entire country last year, and more than the net income for America's farmers last year.

Of course, much of that money was paid out to people who won bets. After expenses, the sportsbooks generally keep less than 10% of the total amount of bets they handle. Over the first four years of legal betting, their revenue figure is $8.8 billion, according to the American Gaming Association, the gambling industry's national trade group.

A major rationale for the push to legalize sports betting was to protect customers from being victimized by unlicensed bookmakers, many operating as part of organized crime. State regulations include robust consumer protections, with watchdog regulators ready to pounce when they see violations.

But making sports betting legal has not succeeded in wiping out illegal gambling. Just look at any of the numerous sports betting Facebook groups, where unlicensed books in other countries tout their offerings; one aggrieved bettor complained Wednesday that after he won a big bet, he asked his bookie to pay him, only to have the man disappear.

Sports betting has been, and still is, pitched to state lawmakers as a source of new tax revenue, a particularly tempting option in trying financial times. It has generated $1.3 billion in state and local taxes since 2018 according to the AGA, but the amount many states keep is a mere drop in the bucket compared with their overall budget. Some states, like New York, tax mobile sports betting revenue at 51% -- a rate that operators say is not sustainable in the long run.

As of Friday, 35 states plus Washington, D.C., have legalized sports betting, with 30 of those up and running, according to the AGA. (Kansas Gov. Laura Kelly signed a bill in her state Thursday). Competing measures will be on the November ballot in a state that has been the Holy Grail for sports betting: California, where wrangling between tribal casinos and commercial gambling companies has made the potential outcome unclear.

Turn on a television and no matter what you're watching, the odds are good that you will be bombarded with ads for sports betting. FanDuel, DraftKings, BetMGM, PointsBet, Bet365 and particularly Caesars Entertainment are flooding the airwaves to promote their sports betting products.

In December, Bill Miller, president and CEO of the American Gaming Association, called the level of sports betting advertising "an unsustainable arms race." There are calls in some quarters for voluntary industry self-regulation of advertising in order to head off the possibility of the type of strict government regulation that exists in England.

Already, Massachusetts lawmakers are considering banning sports betting ads immediately before, during and immediately after live broadcasts of sporting events. New Jersey Assemblyman Ralph Caputo, himself a former casino marketing executive, said "the over-marketing of this industry is obscene."

Kalish, the DraftKings president, said the current level of ads is necessary for "the onboarding of customers" and compared it to the level of advertisements for other new products such as cryptocurrency.

"I don't think that's necessarily a forever state," he said of the current ad levels.

FanDuel's Corcoran said the company is content with its current advertising levels, noting "the industry is still in growth mode."

Felicia Grondin, executive director of The Council on Compulsive Gambling of New Jersey, cited a report in Barron's that said $292 million was spent on sports betting ads in the U.S. in 2020. A year later, it had grown to $725 million.

With the added exposure and the easier availability of betting on a mobile phone (more than 80% of sports bets are placed this way in the U.S.) came an increase in people seeking help for gambling problems related to sports betting, Grondin said.

"It is disturbing, it is alarming and it is intensifying every day," Grondin testified before New Jersey lawmakers this week. "It's very easy to gamble today. You can just take out your phone and sit on your couch."

Four years ago, sports bettors had few options, including predicting the outcome of a game or player performance before the event started. Since then, the array of potential bets, or "markets," has exploded, due in large part to a surge in in-game betting, where gamblers can react to events as a game unfolds and bet accordingly. It has become the fastest-growing segment of a fast-growing industry. Many sportsbooks now offer and encourage, through free bets or refunds of losing wagers, multievent bets called parlays.

And while the more established sportsbooks look to increase their share of the market, the amount of money it takes to enter the industry and compete continues to grow, to the point where many executives of leading companies say they expect some lesser competitors to either merge or stop doing business.

FanDuel's Corcoran said the near-term future is about growing the industry and its individual companies.

"We feel fortunate to have access to about 38% of the American population," he said. "But there are still millions of people that don't yet have legal sports betting. We'd love to be able to operate where they are." 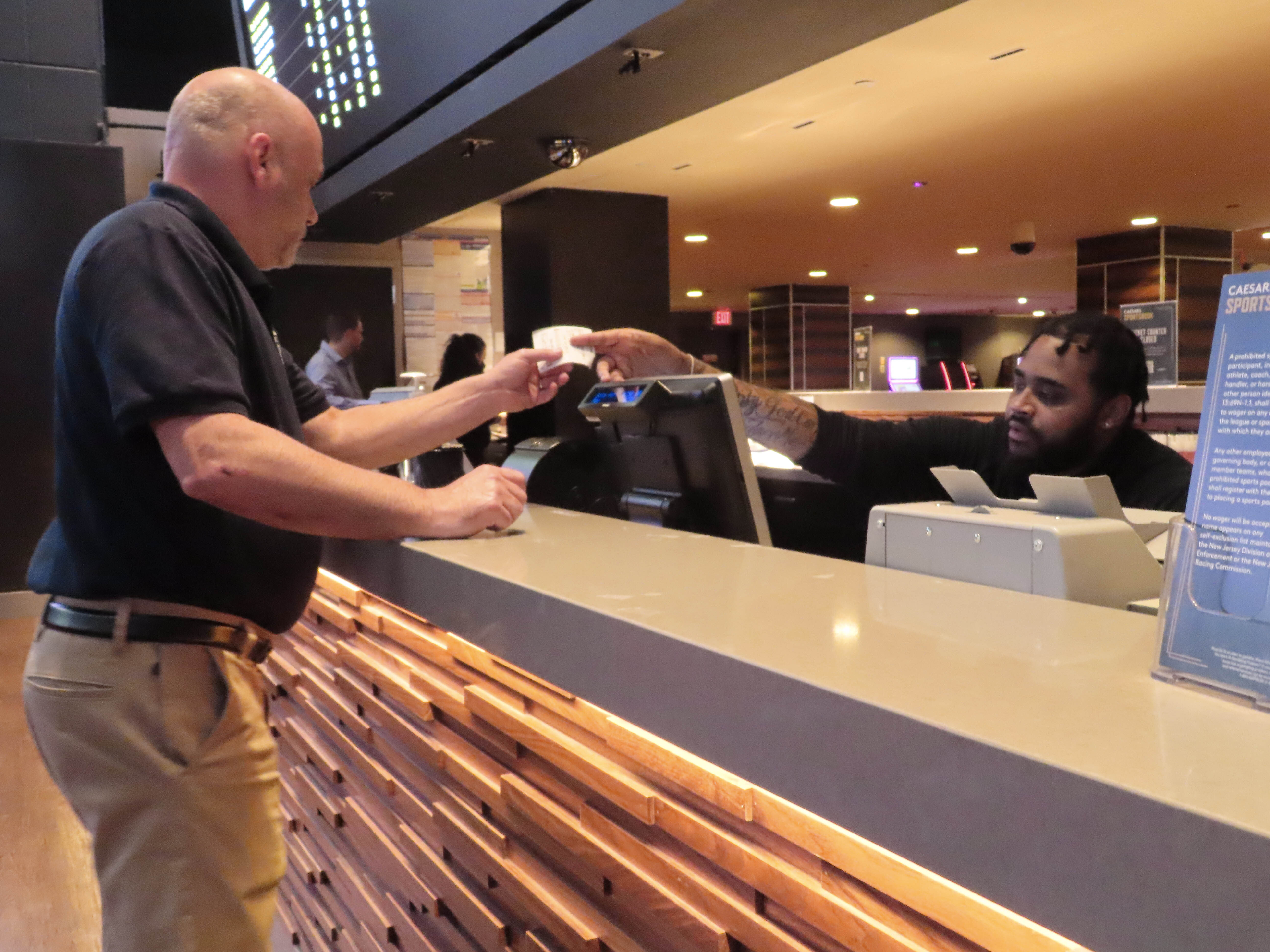 A customer receives a betting ticket in the sports betting lounge at the Tropicana casino in Atlantic City N.J. on Thursday, May 12, 2022. American gamblers have wagered over $125 billion on sports with legal betting outlets in the four years since the U.S. Supreme Court cleared the way for all 50 states to offer legal sports betting; about two thirds currently do. (AP Photo/Wayne Parry) 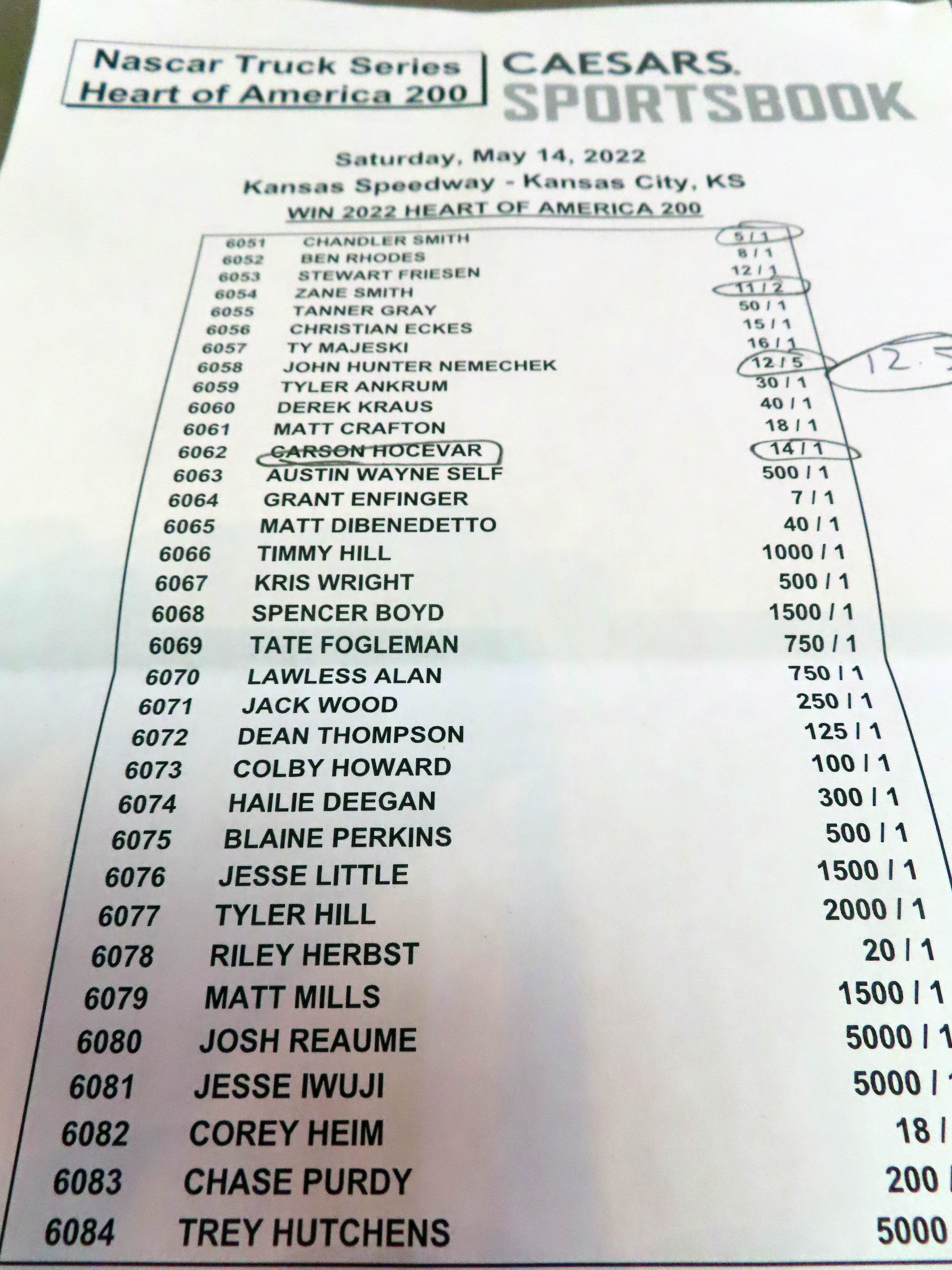 A customer's betting selections sheet sits on a table in the sports betting lounge at the Tropicana casino in Atlantic City N.J. on Thursday, May 12, 2022. American gamblers have wagered over $125 billion on sports with legal betting outlets in the four years since the U.S. Supreme Court cleared the way for all 50 states to offer legal sports betting; about two thirds currently do. (AP Photo/Wayne Parry) 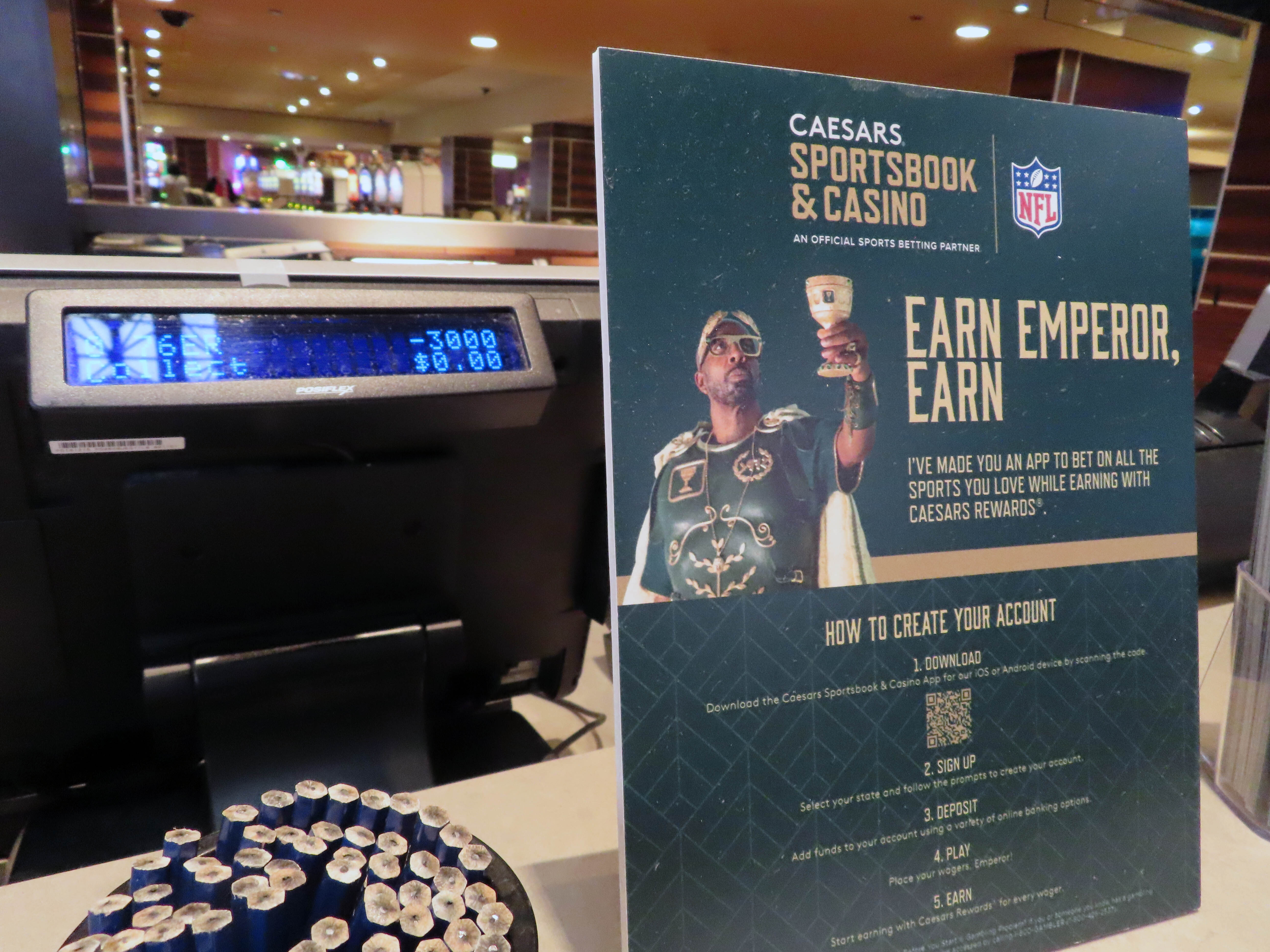 A sign bearing an advertisement for Caesars Entertainment's sports betting operation sits near a sports betting terminal in the sports betting lounge at the Tropicana casino in Atlantic City N.J. on Thursday, May 12, 2022. Caesars is one of the most frequent advertisers of sports betting in the United States, where gamblers have wagered over $125 billion on sports with legal betting outlets in the four years since the U.S. Supreme Court cleared the way for all 50 states to offer legal sports betting. (AP Photo/Wayne Parry) 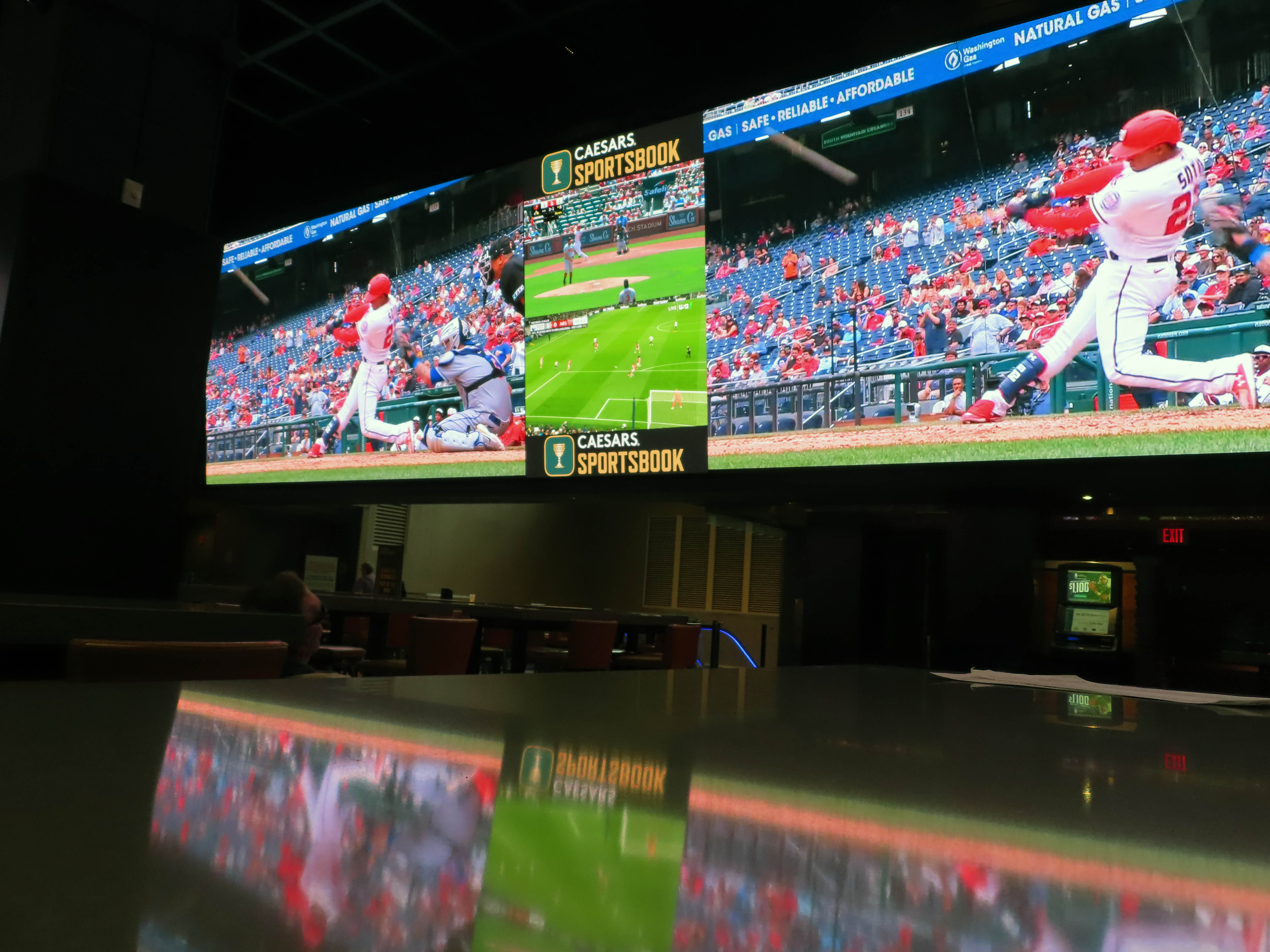 A customer watches a Washington Nationals batter hitting a home run on a giant video screen in the sports betting lounge at the Tropicana casino in Atlantic City N.J. on Thursday, May 12, 2022. American gamblers have wagered over $125 billion on sports with legal betting outlets in the four years since the U.S. Supreme Court cleared the way for all 50 states to offer legal sports betting; about two thirds currently do.(AP Photo/Wayne Parry)

Print Headline: Americans bet $125B on sports in 4 years