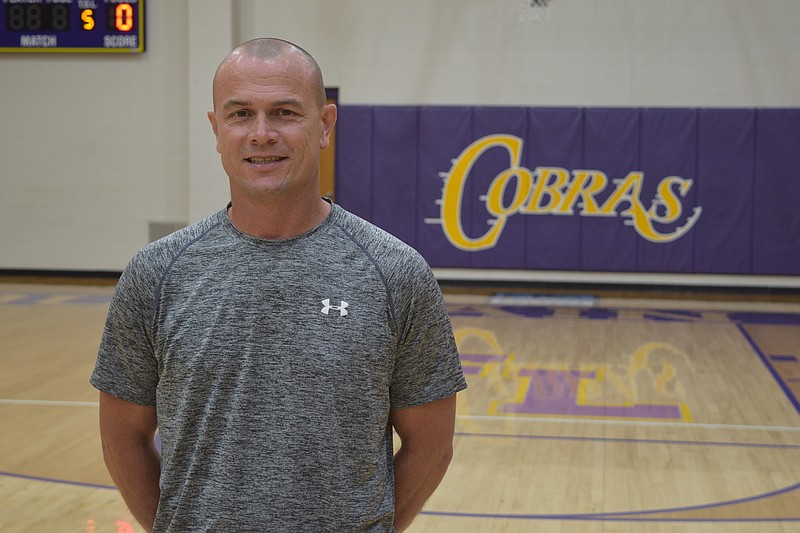 Fountain Lake head girls basketball coach Matt Carter will take over as athletic director at Fountain Lake this summer after Danton Robertson leaves the role. - Photo by Donald Cross of The Sentinel-Record

Carter joined the Fountain Lake family last summer when he was hired as the girls basketball coach, and while he will remain head coach of the Lady Cobras, he will also take over as athletic director.

"I did a lot of thinking about it for sure," he said. "I just had to think about it long and hard. It was a family decision as well as my decision. I just love athletics."

Carter said many good candidates within the Fountain Lake School District reached out to superintendent Michael Murphy to inquire about the position, including Carter himself.

Carter spent time in administration at Cutter Morning Star as a principal as well as interim athletic director for the Eagles before returning courtside at Fountain Lake.

"I got back into basketball over here," he said. "It's kind of my passion. I've been around sports my whole life. I watch it all the time. I just feel like it just gives me a different role obviously than just basketball."

As athletic director, Carter can be around multiple aspects of his passion.

"You know just an opportunity to work with everybody on staff -- our coaching staff, all of our athletes," he said. "It gives me an opportunity to kind of build relationships beyond just my team in basketball."

"It helps tremendously," Carter said. "As an administrator I had to work in a different capacity. I learned how to communicate with parents; kids and I dealt with different situations other than just basketball situations."

Carter said he had assumed he would coach for his whole career, but he is grateful for the athletic director opportunity.

"You never know what you want to do fully -- there's always opportunities that come up," Carter said. "I didn't know one day I would be an athletic director."

Carter looks to build relationships with all the Fountain Lake athletes and coaches in his first year on the job.

"You don't ever want to go into something new and make wholesale changes and stuff like that," he said. "My goal will just be to help in any way that I can and be there to support and just have the most well-rounded, best athletic program we can possibly have -- staff wise, athletes, administrators, everybody as a whole because it takes a big team to be successful."

While Carter expects a lot of challenges in his first year as athletic director, he expects the transfer of the job from Robertson to himself to be one of the bigger ones. Carter will have to learn the ins and outs of the finances, what the different athletic programs need and about the program as a whole.

A Hot Springs native, a graduate of Cutter Morning Star and a former coach at Jessieville, Carter is embedded and very familiar with the Garland County community.

After one year as the head girls basketball coach at Fountain Lake, Carter has grown into Cobra nation.

Carter said he wants all of Fountain Lake's teams to be successful and the program to be well-rounded, but he said success can be measured in more than just wins.

"When people think about Fountain Lake, they want to think about, 'Man it's tough to go over there and play because those kids play hard all the time. Might not win all the time, but they play hard. The fans are great. The people, the administrators, the coaches, the kids are wonderful to be around,'" Carter said. "That's what I want. I want to hear all those positive things."

Since Carter will continue to coach the Fountain Lake girls basketball team, there will be challenges when it comes to being both the athletic director and a head coach.

Carter recently hired Jessieville's Kellie Davis as his assistant coach on the basketball team. When something comes up, Carter will trust Davis and other people he works with like head boys basketball coach Jake Dettmering while Carter deals with athletic director duties.

"I'm going to have to adapt and adjust on the fly probably," Carter said. "There are going to be times when the challenge is something bumps up and I have to go take care of it. I'm going to have to rely on my coaching staff. (Kellie) may have to take over the reins at times."

Following in the footsteps of an all-time great, Robertson took over the athletic director role from Fountain Lake legend Marc Davis and a year later Carter is following suit.

Carter continues to immerse himself in a community that loves its Cobras. He is excited for the opportunity to keep working in an area with a good blend of love for its athletes and the passion to win.

"I know that whether we're having a good year or a down year in athletics, I know that people care about it," Carter said. "They want to win. They want to strive for success to be the best. That was one of the things I really liked about this place. It was appealing to me."