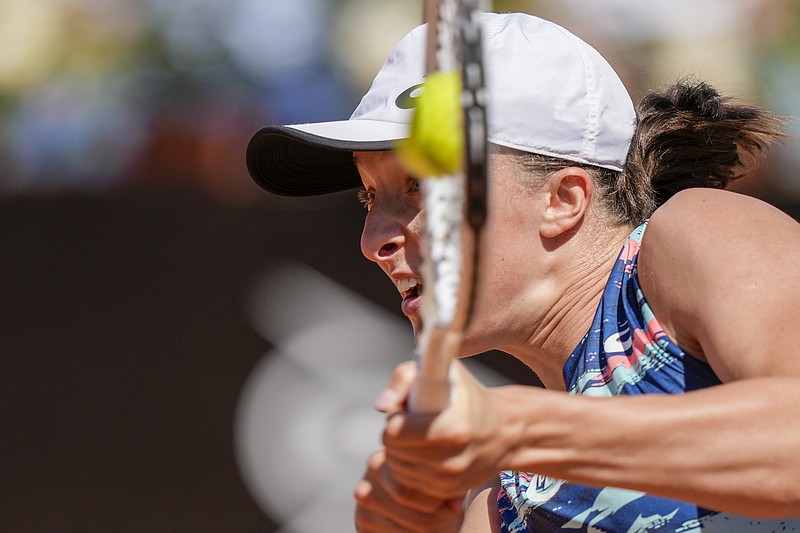 Iga Swiatek, of Poland, returns the ball to Bianca Andreescu, of Canada, during their match at the Italian Open tennis tournament in Rome Friday. - Photo by Andrew Medichini of The Associated Press

ROME -- It was just the type of scrambling, wear-down-the-opponent mentality and shot-making that took Novak Djokovic to within one match of a calendar-year Grand Slam in 2021.

A spectacle that was missing for so much of this year when Djokovic didn't play because he wasn't vaccinated against the coronavirus.

The top-ranked Djokovic brought the Foro Italico crowd to its feet with several memorable points in a 7-5, 7-6 (1) win over Felix Auger-Aliassime to reach the Italian Open semifinals on Friday.

To conclude a long rally, Djokovic produced a delicate backhand topspin lob winner over the leaping Auger-Aliassime to break serve and lead 4-2 in the second set.

Djokovic celebrated the lob winner by raising both of his arms above his head then urged the packed crowd on Campo Centrale to cheer louder by gesturing with his hands.

"It was high-level tennis," Djokovic said. "He did ask me to raise the level and I had to play consistently well."

While he is still seeking his first title of the year, Djokovic was ensured by the victory of holding on to the No. 1 ranking for another week and have the top seed at the French Open.

Second-ranked Daniil Medvedev can no longer pass Djokovic when the rankings are updated on Monday.

Roland Garros starts in nine days and Djokovic is gearing up for his first Grand Slam tournament of the year after he was deported from Australia before the Australian Open.

Playing the ninth-ranked Auger-Aliassime for the first time, Djokovic took some time before he started reading the Canadian's big serve. Then he stepped up his game and hit an off-balance cross-court forehand winner to break and take the first set.

Auger-Aliassime showed some touch early on when he pulled off a backhand half-volley winner to conclude a long rally in the second game.

In the end, though, it was Djokovic -- playing his 16th consecutive quarterfinal at the clay-court tournament -- who won all the big points. Like when he ran down two smashes and responded with two defensive lobs before stepping in to whip a cross-court backhand winner during the tiebreaker.

Tsitsipas will face Alexander Zverev in their third semifinal over the last month after the 2017 champion beat Cristian Garin 7-5, 6-2.

Swiatek struggled to handle being a top-five player last year. Now she's learned how to use her recent success to intimidate.

"I needed time to learn how to do that properly, how to use the streak or ranking to put pressure on my opponents," Swiatek said. "Last year when I had (a) better ranking (than opponents), it felt like it's something that's pressuring me down. This time it's totally different."

In all, Swiatek produced 27 winners to Andreescu's 12 and converted all six of her break points.

"I feel like every match I'm playing better and better," Swiatek said. "Even though the first set was pretty tight, I had some ups and downs, I feel like I could play well in important moments and break back anytime.

"I'm pretty happy that also the second set was more solid because it shows that I'm learning my lessons throughout the whole match."

Swiatek is attempting to win her fifth straight tournament and defend her title in Rome.

The last player to win more consecutive matches was Serena Williams in 2014-15, when she had a streak of 27.

Swiatek's semifinal opponent will be third-seeded Aryna Sabalenka, who rallied past Amanda Anisimova 4-6, 6-3, 6-2 for her first victory over the American in five tries.

Also advancing was recent Madrid Open champion Ons Jabeur, who rallied past Maria Sakkari, 1-6, 7-5, 6-1 for her 10th straight win. Jabeur will face Daria Kasatkina, who advanced when Jil Teichmann retired due to a left thigh injury with Kasatkina ahead 6-4, 3-2.

Tsitsipas kept his cool while nearly the entire crowd of 10,500 fans supported Sinner, the Italian who is ranked 13th and considered a future Grand Slam contender.

But the 20-year-old Sinner dropped to 0-12 in his career against opponents ranked in the top five.

Sinner was treated by a physical trainer after twisting his left hip during the final point of the first set.

His body is still developing physically.

"That's where the gap is," Sinner said. "In terms of tennis, I'm there. Physically, I need to improve." 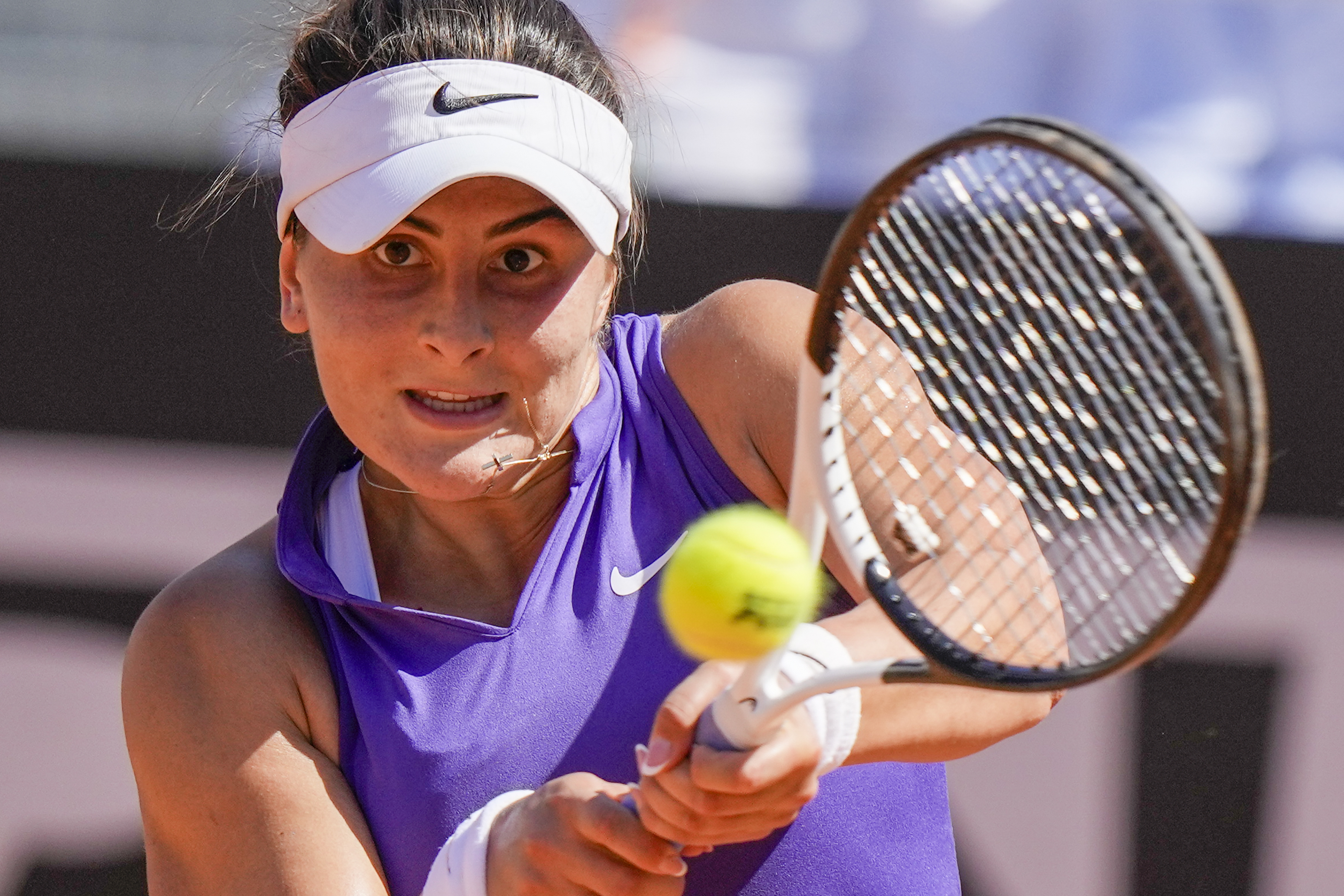 Bianca Andreescu of Canada returns the ball to Iga Swiatek of Poland during their match at the Italian Open tennis tournament, in Rome, Friday, May 13, 2022. (AP Photo/Andrew Medichini) 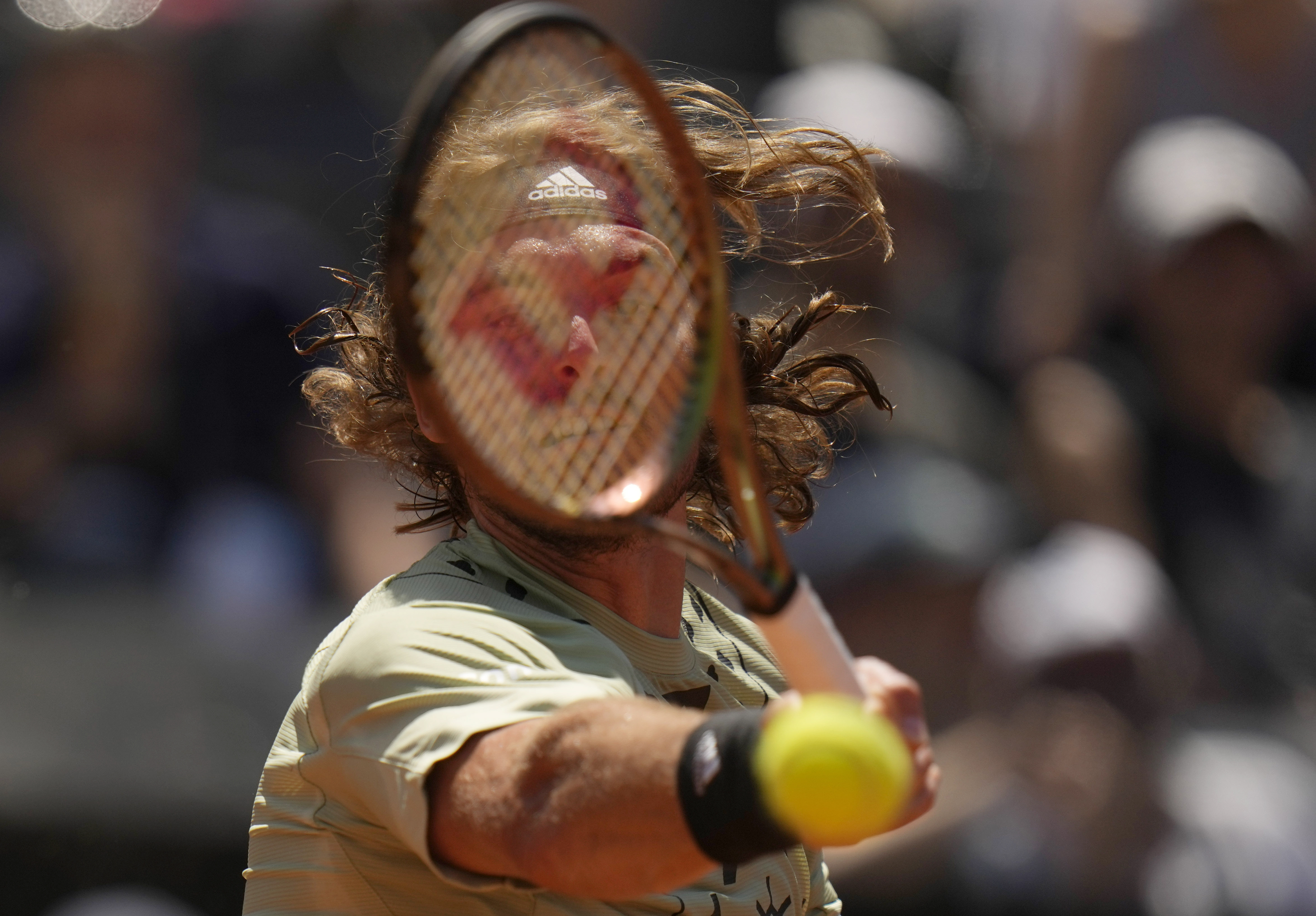 Greece's Stefanos Tsitsipas returns the ball to Italy's Jannik Sinner during their match at the Italian Open tennis tournament, in Rome, Friday, May 13, 2022. (AP Photo/Alessandra Tarantino) 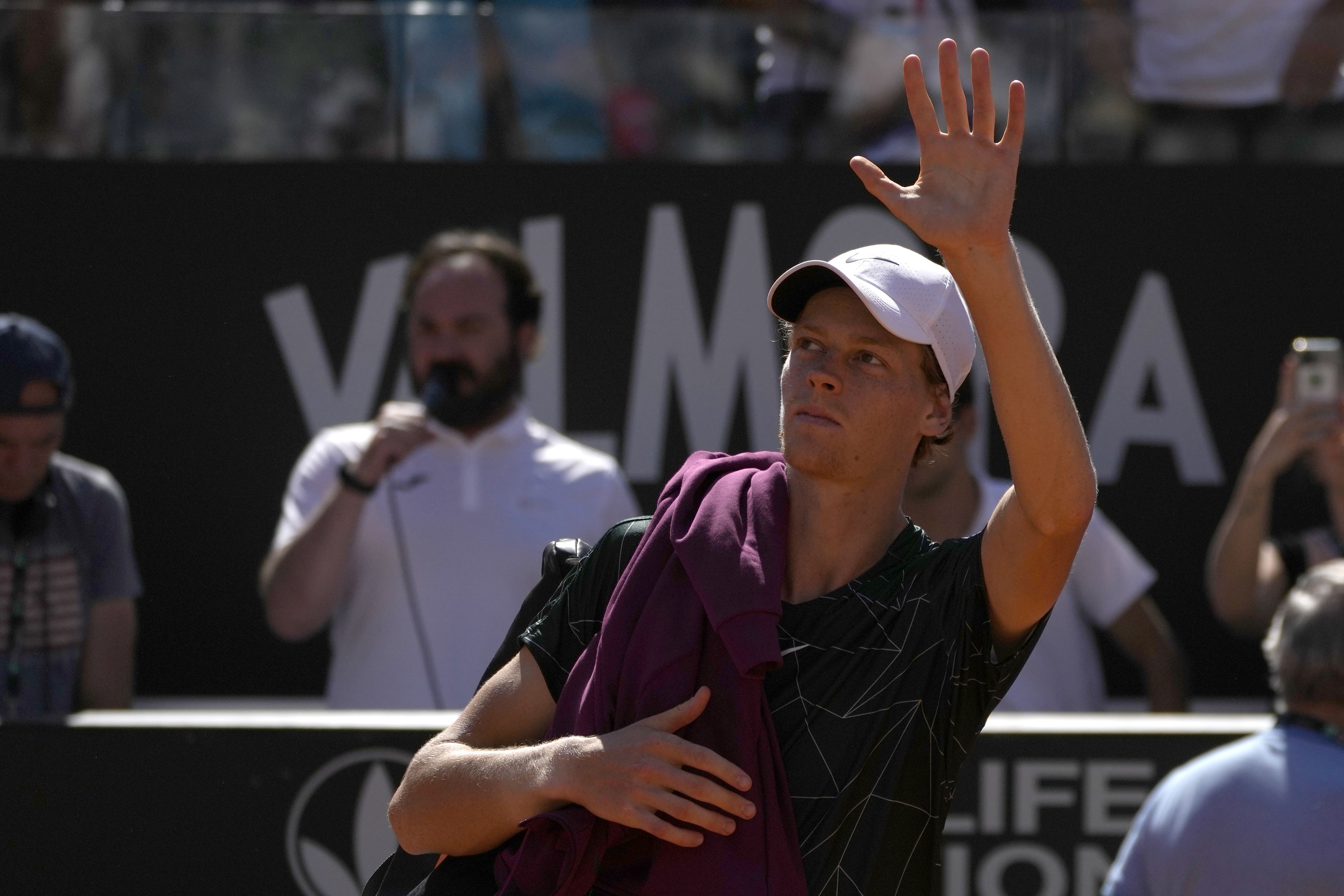 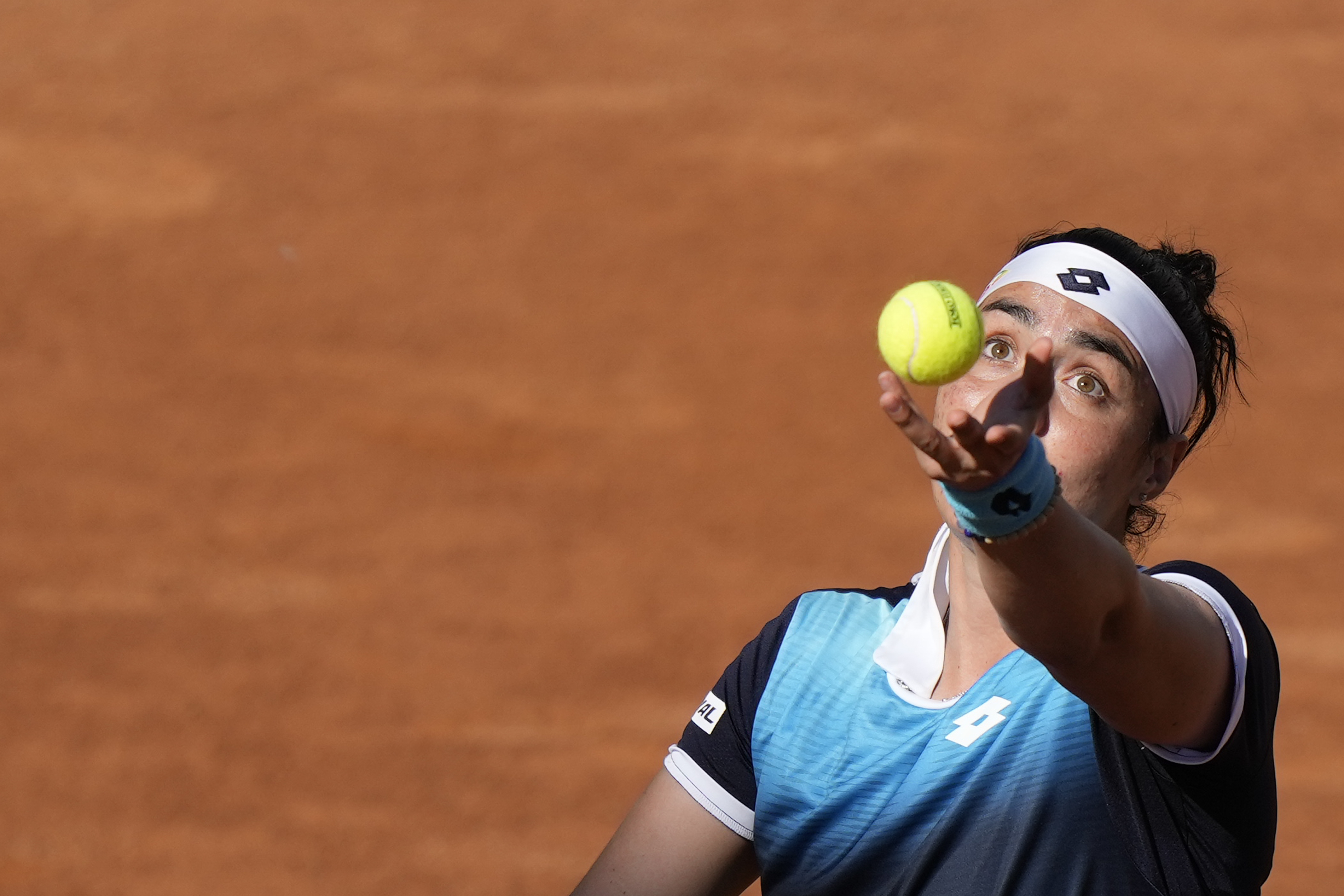 Ons Jabeur of Tuniusia serves the ball to Maria Sakkari of Greece during their match at the Italian Open tennis tournament, in Rome, Friday, May 13, 2022. (AP Photo/Andrew Medichini) 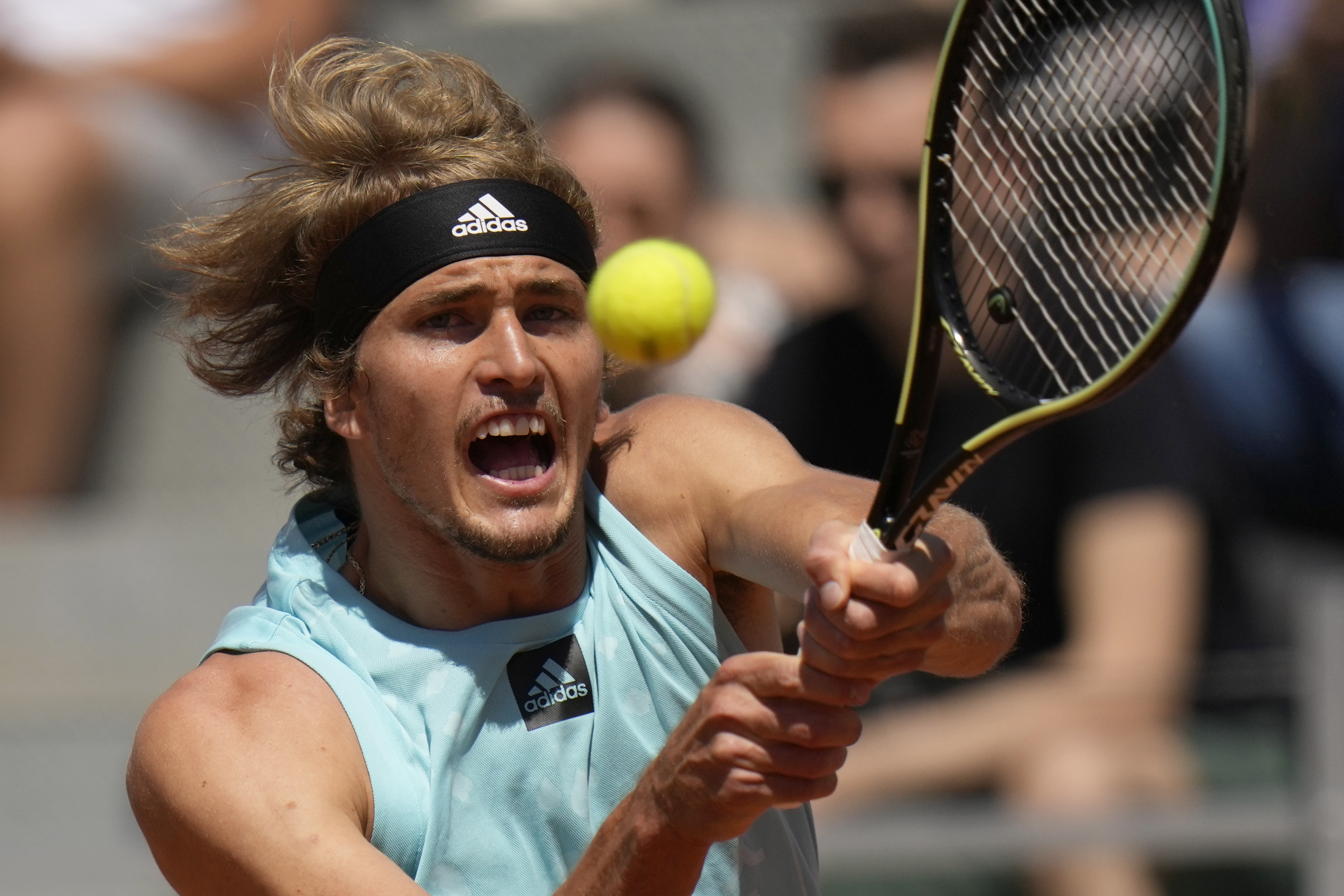 Alexander Zverev of Germany returns the ball to Cristian Garin of Chile during their match at the Italian Open tennis tournament, in Rome, Friday, May 13, 2022. (AP Photo/Alessandra Tarantino) 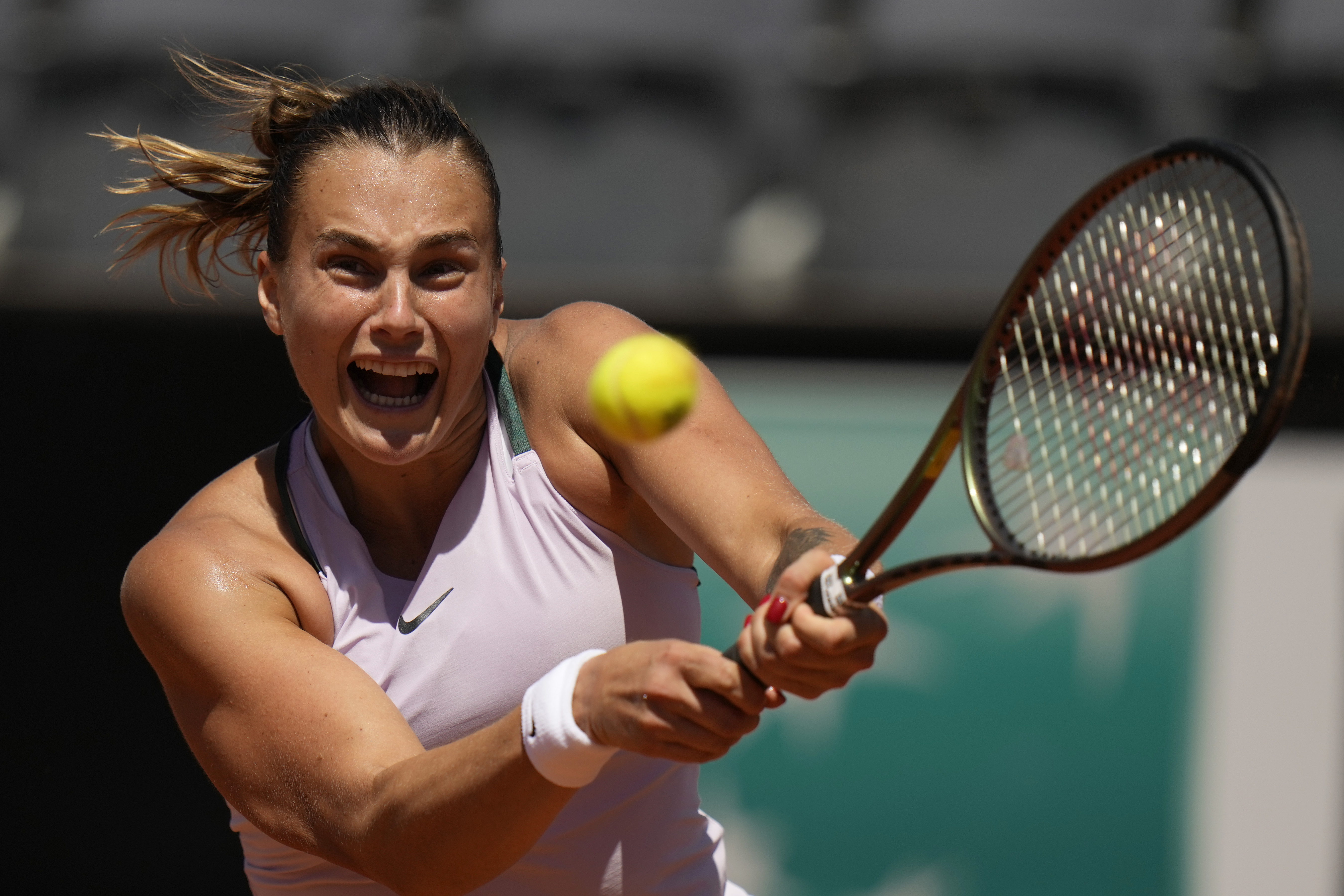 Aryna Sabalenka from Belarus returns the ball to Amanda Anisimova of the U.S.during their match at the Italian Open tennis tournament, in Rome, Friday, May 13, 2022. (AP Photo/Alessandra Tarantino)