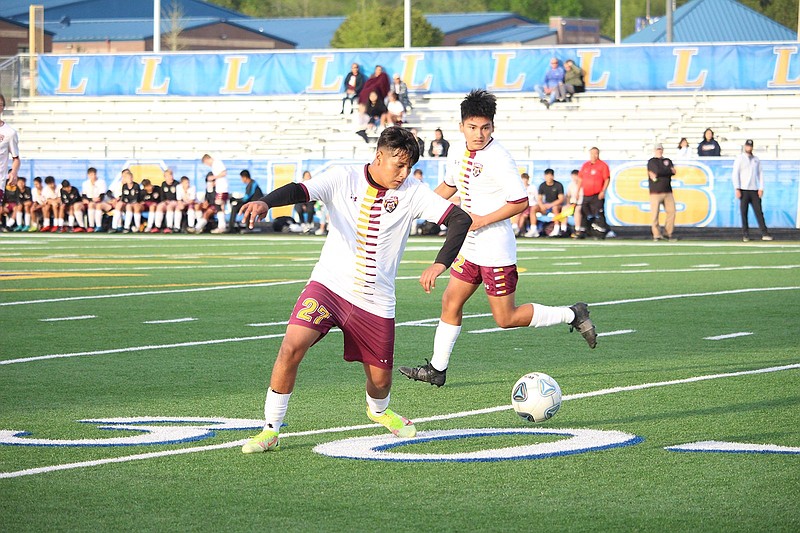 Battling through heat and against the No. 1 seed from the 5A-West Russellville, Hot Springs fell 1-0 to the Cyclones in the second round of the Class 5A boys state soccer tournament in El Dorado Friday.

Hot Springs head coach Geoffrey Hedrick emphasized that the Trojans played well but noted the impact of the heat. The Trojans were severely affected by high temperatures in their 2-1 win over Searcy Thursday, and that bled into Friday's match.

"We dominated the entire first half," Hedrick said. "The heat started really taking a toll on us. You know my guys hadn't really recovered from the previous day. I guess about the 20-minute mark is when they scored their goal. We just had somebody out of position. They lost focus for just a minute, and it created the opportunity."

The Trojans created plenty of chances throughout the entire season, but Hot Springs' finishing was a recurring problem in both the regular season and postseason. Hedrick said his team created lots of chances against Russellville Friday.

"We were all over the goal," he said. "We hit the post. We had our chances. We just couldn't capitalize. Their goalie was massive. That's one of the biggest goalies I've ever seen in my life."

Russellville came into the game with just one loss on the season, but Hedrick said the Trojans were able to stifle the Cyclones' style of play for part of the game.

Russellville picked up some momentum after the goal, but Hedrick said that the Trojans were definitely battling back into the game slowly.

"We just went out and did our thing, and when we do our thing, we essentially take any team out of what they're trying to do," he said. "We were able to do that for a good portion of the game. Once they got the goal, it gave them wind. They definitely got a little momentum from that. I thought we were fighting to get that back as well."

Hot Springs' young squad showed encouraging signs with the Trojans' 2-1 win over Searcy and their close contest against Russellville.

"I would say overall it's a success," Hedrick said of the season. "You know we're a very, very, very young team. We're only losing a few people. I'm anxious to see what these guys are going to do next year. They play with a high level of energy. It's the highest pressure that we've been able to play with since I've been at Hot Springs."

Lakeside (16-5-2) battled back from a 1-0 deficit to force overtime against Little Rock Christian, but the Warriors (12-2-2) prevailed 2-1 in overtime in the Class 5A state tournament at El Dorado Friday.

Rams head coach Craig Moses said his team had to try to break down a packed-in Warrior defense from the start.

"They parked the bus early," Moses said of the Warriors' defensive strategy. "We had a ton of shots. We had to take a lot of them outside -- 20 to 25 yards out, even more. Had a bunch of shots and just could not put them on frame."

Moses told his team before the match not to give the Warriors set pieces, and his fears proved valid when Little Rock Christian opened the scoring with a free kick from just outside the 18-yard box.

Lakeside responded when Brock Garner equalized with a header off a cross from Imanol Barragan to force overtime.

The Rams created a chance early in overtime from a corner, but the Warriors scored after a foul on the ensuing counter attack.

Moses said the Rams had a great season.

"It ranks up there pretty high," he said. "It ranks in about the eight range or somewhere around there I would say. Anytime you win that many, that's a good season. It's disappointing. You know, one of our goals every year is to make it to the semifinals. ... That part of it is disappointing. I thought we were the better side."

Moses received a call around 1 a.m. Friday and learned that a key piece of his back line was sick, so the Lady Rams were without their sweeper against the Lady Warriors.

"Having her out hurt because I had to reorganize the defense," Moses said. "She's been such a staple back there at the defensive sweeper spot. She cleans up a lot of miscues. Not having her back there today, they got two goals off of some miscues. That kind of opened it up for them."

Trailing 2-0, Lalita Fry brought the Lady Rams within one when she scored off a corner kick, which is where the score stood at halftime.

"We had a couple opportunities to tie it up in the second half," Moses said. "We just could not put the ball away. That game was a lot closer than what the scoreline says. Then at the end, again, we had a miscue. ... It was just some backline miscues. We had to reorganize a little bit back there. Some of those girls weren't ready because we just hadn't worked it just because who would've thought? But it happened. That's just how it was."

With an 11-1 finish in 5A-South play, the same as El Dorado, Moses concluded that it was a good season for the team, highlighting the mindset change within the program.

In the past at Lakeside, a first-round playoff win for the Lady Rams marked a very successful season. However, the last two senior classes have turned things around to where the players expect to make a deep run in the state tournament.

"We were co-conference champs, and everytime that's a goal to win conference," Moses said. "They were definitely wanting to go a lot further. That group of seniors and the seniors last year changed the dynamic of this girls group and you're going to see good things to come in the future."

"We played a really, really good game," Lake Hamilton head coach Cito Dickson said. "We had them on the ropes for the majority of the game. It was 0-0 at halftime, and they went on a stretch about the last 10 minutes of the first half where they seemed to start taking control of the middle, but before that, we were pretty much dominating possession and dominating the midfield and had a lot of opportunities, just couldn't get one to drop."

The Wolves and Pointers play a similar style of soccer that works to disrupt their opponents by maintaining control of the ball, a style that served the team well in 5A-South play, but Dickson said that Van Buren has a good track record of finishing at the net.

"They took very minimal shots, but what they're good at is finishing," he said. "All the film we watched against Van Buren is if you're going to let them shoot, expect it's going in. So our goal was to minimize their shots, and I think they might have shot five times and two of those five times they went in the back of the net. So they didn't score until the second half with seven minutes left in the game."

Dickson pointed out that he was extremely proud of his team for maintaining its composure throughout the match.

"There was a lot of cussing going on in the field," he said. "There's a lot of screaming going on on the field, a lot of yelling at refs, and my boys didn't take part of that. You know, they kept composure. They were nothing but positive with one another, uplifting with each other. And I told them, I said, 'Sometimes winning isn't all. Sometimes a coach has to concern himself with building character, too. I mean, we all like to win, but at the end of the season, if I haven't made these boys any better than they were when they got to me, I'm really missing the mark on coaching."

With three seniors, Dickson feels that the team has a lot to build upon going forward, but he said that with strong competition moving into the conference next year, this year has helped to improve the conference overall.

"It's preparing everybody, including Hot Springs and Lakeside for what's to come," he said. "Because ... I believe we're gaining Benton, and we're gaining, I believe, Pulaski Academy next year. ... So, you know, a conference that used to be a pretty solid lock for the top four positions; now there is going to be at least, if not more, six very, very capable teams of fighting for those four positions."